Chart of the Week: China Ends its Exports Tax for Rare Earths

This week, China announced that it was ending its export tax on rare earth minerals, essential components of many electronics, including computers and smartphones.  This announcement follows China’s removal of export quotas in this sector in January; the quotas were found to violate WTO trade rules at the end of last year. The ruling, through the World Trade Organization’s dispute settlement body found that China’s rare earths quotas were being used to influence the price of these minerals, rather than having the stated purpose of environmental conservation.  This graph compares the trade value of China’s rare earth mineral exports and the timing of China’s quota implementation over the same period.  From 2010 onward, the volume of rare earths exports was restricted to 35,000 tons per year, and as a result the spike in the value of exports  mostly reflects a change in price, not an increase in production.  Since the broader commodities market also reached peak prices in 2011, for comparison this graph also plots the value of the United States’ rare earths exports, the second largest producer of rare earths minerals. 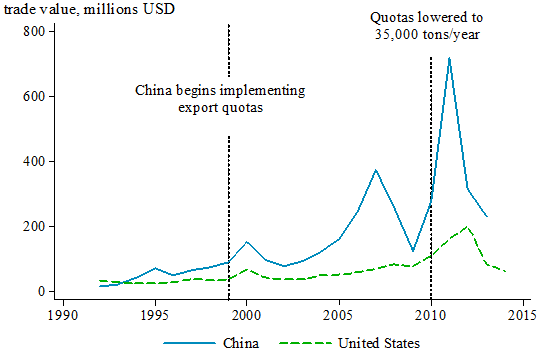