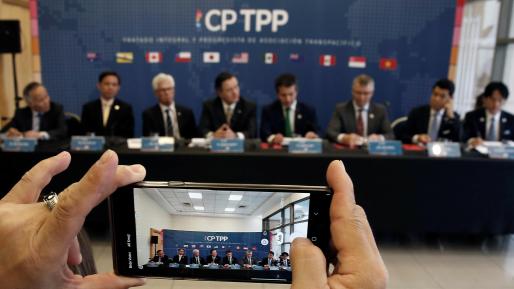 The deepening US-China trade war and nationalist reactions to the COVID-19 pandemic are reshaping global economic relationships. Alongside these developments, two new megaregional trade agreements, the Comprehensive and Progressive Agreement for Trans-Pacific Partnership (CPTPP) and the Regional Comprehensive Economic Partnership (RCEP), will refocus East Asia’s economic ties in the region itself. The new accords are moving forward without the United States and India, once seen as critical partners in the CPTPP and RCEP, respectively. Using a computable general equilibrium model, we show that the agreements will raise global national incomes in 2030 by an annual $147 billion and $186 billion, respectively. They will yield especially large benefits for China, Japan, and South Korea and losses for the United States and India. These effects are simulated both in a business-as-before-Trump environment and in the context of a sustained US-China trade war. The effects were simulated before the COVID-19 shock but seem increasingly likely in the wake of the pandemic. Compared with business as before, the trade war generates large global losses rising to $301 billion annually by 2030. The new agreements offset the effects of the trade war globally, but not for the United States and China. The trade war makes RCEP especially valuable because it strengthens East Asian interdependence, raising trade among members by $428 billion and reducing trade among nonmembers by $48 billion. These shifts bring regional ties closer to institutional arrangements proposed in the 1990s and incentivize greater cooperation among China, Japan, and South Korea.

The US retreat from East Asia is costly