Debate: The Case for Growth

Op-ed in the Economist

In an online debate, the Economist asked Adam S. Posen, president of the Peterson Institute, and Tim Jackson, director of the Centre for the Understanding of Sustainable Prosperity, to debate the question: If the rich world aimed for minimal growth, would it be a disaster or a blessing? Posen answers that it would be a disaster.

Economies naturally grow. People innovate as they go through life. They also look around at what others are doing and adopt better practices or tools. They invest, accumulating financial, human, and physical capital.

Something is deeply wrong if an economy is not growing, because it means these natural processes are impeded. That is why around the world, since the Dark Ages, lack of growth has been a signal of political oppression or instability. Absent such sickness, growth occurs. 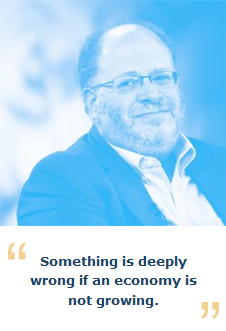 So the question of whether rich countries have been aiming for excessive growth is profoundly misguided. The real question is whether they are getting barriers out of people's way enough to allow growth to take place. Sometimes it requires regulation or public investment or even redistribution, rather than laissez-faire, to remove those barriers.

Fundamentals of demography, education, capital, and technology determine growth potential. A government that aims at "maximal" growth above this potential will quickly be frustrated—inflation will rise, bottlenecks will occur, financial markets will "correct." A country that pursues growth persistently below potential suffers more acutely. The prospects of younger people dim, as they have in southern Europe during the forced contraction of the euro crisis. Savings are eroded, leaving many older people unable to maintain their health care and basic income.

Climate change and water scarcity, among other resource-driven threats, are real concerns. But mispricing of their true costs and misallocation of those resources are their cause, not economic growth. If anything, greater rich-country growth is the hope for dealing with those mounting disasters, in two ways.

First, it is economies growing on average at potential (Japan in the 1980s, Germany in the 2000s, and now China) that have led in reducing their carbon emission per unit of GDP. Even America has improved in this regard, despite its childish political denials of global warming, because of the natural tendency for healthy growth to promote efficiency.

Second, to the degree that closure of unclean industries or inefficient processes is required to reduce environmental harm, more growth makes that adjustment easier. Laid-off workers can more easily find new employment, and special interests blocking progress can more easily be bought off. Given that rich-country environmental problems are primarily political, caused by politicians' lack of courage to price carbon and water properly, growth is necessary (though not sufficient) to change those politics.

For the other great global moral challenge, the reduction of poverty in the poor world, the argument is the same, but with even clearer evidence. More people have exited poverty globally in the past 30 years than in all of prior human history, precisely because the rich world steadily grew at potential rates for most of the time. That rich-country growth led to the diffusion of innovations to poorer countries and the expansion of markets for their exports. This would not have happened if the rich world had strived for minimal growth.

The True Levels of Government and Social Expenditures in Advanced Economies