A Case for Why TPP Would Be Good for US Workers

Opponents of trade agreements like the Trans-Pacific Partnership (TPP) habitually cite what they say is evidence that trade liberalization, over the years, has cost millions of US jobs, especially in manufacturing. It is striking that three highly-respected labor and trade economists whose seminal work has documented these jobs losses have come out in favor of the TPP. In an essay in the Washington Post’s Outlook Section, David Autor, David Dorn, and Gordon H. Hanson argue that the potential gains of the TPP for the United States are significant, with a reminder that those manufacturing jobs lost from import competition are not going to come back no matter what is done on the TPP. Their forward-looking argument should hold weight in the pending debate on this agreement and trade deals more broadly.

Studies show that increased trade has indeed been a contributor to the steep decline of manufacturing employment in the United States (figure 1). Several studies by PIIE senior fellows have documented and analyzed such trends (Edwards and Lawrence 2013, Lawrence and Edwards 2013, and Moran and Oldenski 2014). While international competition is found to play a role, experts disagree on how large of a role. 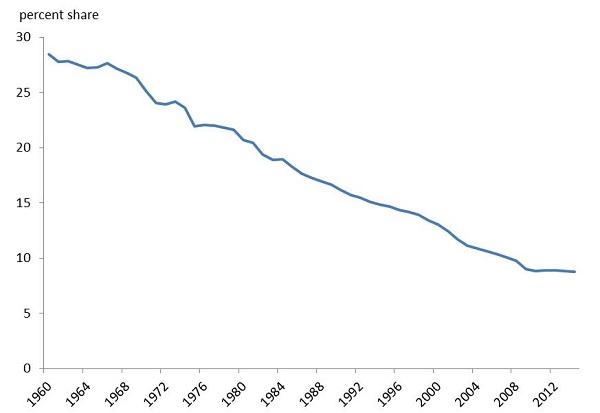 Source: US Bureau of Labor Statistics.

Specifically, Autor, Dorn, and Hanson (2013) analyze the effect of Chinese imports on local labor markets—based on 722 commuting zones that cover all metropolitan and rural areas in the United States and capture regional variations in industry specialization—over the period 1990 to 2007. The authors estimate that Chinese import competition accounted for 21 percent of the overall decline of US manufacturing employment in that period. The study did not find a significant effect on average manufacturing wages in the commuting zones, but did find a small negative effect on earnings within local nonmanufacturing sectors.1 Acemoglu et al. (2014) build on this analysis to consider the effect of trade shocks on national level employment and possible reallocation of labor across sectors. The authors estimate that on net 2 million to 2.4 million jobs were lost due to imports from China over the period 1999 to 2011.

These studies among others are widely cited by opponents of trade liberalization. But Autor, Dorn, and Hanson send a reminder that “as much as we might like to return to 1970 when manufacturing comprised a quarter of U.S. nonfarm employment, that’s impossible without massive protectionist barriers that would isolate the U.S. economy and lower U.S. living standards.” Moreover, “halting TPP would not assist U.S. manufacturing or benefit U.S. workers. The reality is that the globalization of manufacturing is a fait accompli. Those manufacturing jobs are not coming back.” Instead, the authors argue that it is important to support a trade agenda that promotes policies that help US companies thrive in the sectors where they are most strong. As such, the TPP deserves merit for several reasons.

First, given the United States’ generally low levels of tariffs on goods, a number of TPP countries already have access to the US market, and the TPP will be of little consequence for US manufacturing employment. But importantly, TPP is about much more than manufacturing: The deal promises to liberalize trade in services and in agriculture, two areas in which the United States enjoys trade surpluses (figure 2). Further, the TPP aims for strong rules on intellectual property and investment, essential both for protecting US firms and for boosting trade in technology- and knowledge-intensive products and services, in which the United States has comparative advantage. In 2013, charges for the use of intellectual property and telecommunications and information technology services combined, accounted for 24 percent of total US service exports (figure 3). In particular, increased foreign direct investment both at home and abroad means more jobs, spending on research and development, and productivity gains to the US economy.

Figure 2 US trade balances in services and agriculture, 2003-13 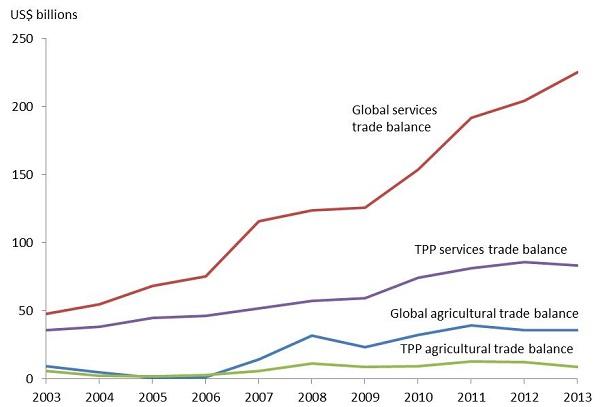 Note: The total for TPP countries does not include Brunei, Peru, and Vietnam.

Sources: UN Comtrade and US Bureau of Economic Analysis. 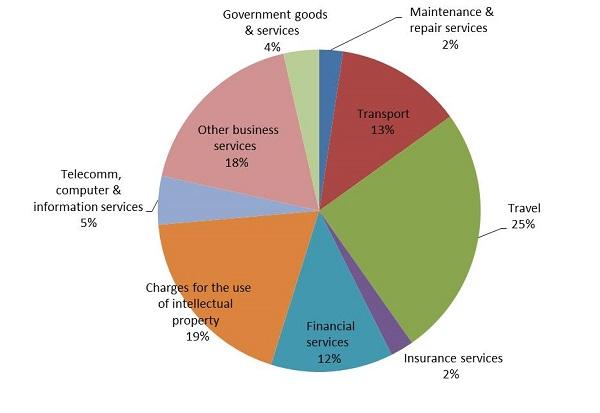 Second, trade enables US firms to efficiently utilize their global production networks—such global supply chains are the new reality of the global economy. These networks have allowed US exports and investments to spread US technology and ideas, critical to the growth of emerging markets like China and to the global economy writ large. In turn, as the authors remind us, China’s affluence benefits the United States—one example is that China’s consumer market is poised to overtake the US as the largest market for the iPhone.

Finally, TPP is also about setting new rules and standards that could serve as a template for future trade deals. This puts competitive liberalization pressure on the United States’ non-FTA trading partners, like China, to elevate their practices to meet some of those standards. It also improves prospects for future deals with the United States (see Bergsten, Hufbauer, and Miner 2014). A trade deal with China like the TPP would help level the playing field for US companies and offer recourse to protections like investor-state dispute settlement.

This positive assessment, like others, is based on expectations for the TPP to be a high-standard, comprehensive deal. The authors don’t say it outright, but it also serves as a reminder that the benefits from trade agreements, and trade and investment liberalization more broadly, are in the long run gains from helping to shift workers and resources toward a country’s most productive firms and industries (Petri 2015). No one claims that the TPP or any other trade agreement will be a panacea for near-stagnant median household income in the US. But small increments in productivity, from many sources, are the ultimate key to national prosperity. Complementary policies must be enacted to ensure that national prosperity is broadly shared by all Americans.

1. The small negative effect works out to a decline of about 3 percent in base year wages of workers in industries directly impacted by Chinese imports. The wage reduction of wages was not found to be a symptom across the broader labor market.

Next Up in the Trade Wars: Autos