US public opinion is not, on the whole, anti–free trade, despite heated rhetoric suggesting the opposite during this year’s presidential campaign. The reasons are outlined in a recent PIIE Policy Brief. Sentiment does appear, however, to be near a turning point regarding how to address the pain that has been perceived to accompany greater economic integration between nations. Protectionist rhetoric is a surrogate for a deeper discussion about the role of the state in an increasingly open economy.

In other advanced economies, increasing trade openness has generally been accompanied by more broadly interventionist employment, education, and social insurance policies and attendant increases in the size of government. This pattern has not held in the United States. That will need to change.

Why would more open trade lead to larger government? The basic logic is pretty straightforward. Trade openness creates broad benefits but comes with many potential risks. Often, the winners—like Apple and Tesla—are not in the same industries or communities as those hardest hit. Because the government wants to both maximize the size of the pie and ensure social stability and harmony, liberalized trade policies are often married to more expansive programs of social benefits and insurance. This embedded liberal compromise—market integration and trade with an increased role for government—has characterized most other advanced economies since the 1960s. Yet in the United States, rising trade exposure has not been met by a similar increase in the size of government.

“Big government” rhetoric aside, general government final consumption expenditure (GGFCE)—government expenditures on goods and services for individual and collective needs of the community—as a share of GDP in the United States has been lower in the 2000s than during the 1960s, a time when the US economy and US workers were much less exposed to the vicissitudes of global markets and less likely to be displaced by technology. In the Organization for Economic Cooperation and Development as a whole, the trend is the opposite, with ever increasing trade exposure going hand-in-hand with higher levels of GGFCE. 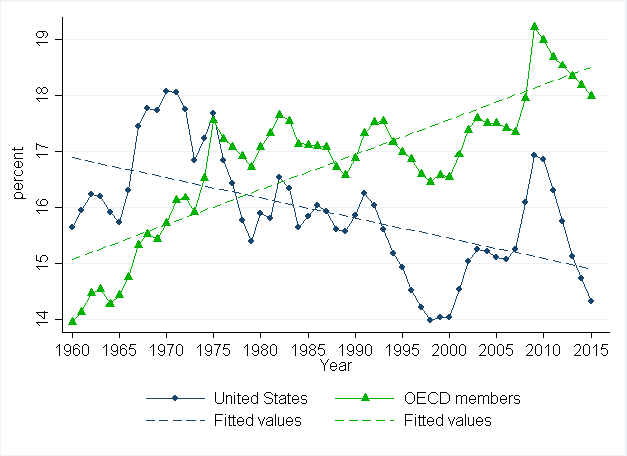 If rising government expenditures are central to the embedded liberal compromise—the combination of free trade with a more interventionist state that would address issues of equity and social protection—it should be unsurprising that support for the former would falter in the absence of the latter. Like the proverbial frog in the pot, the United States has slowly seen wages stagnate and its trade exposure creep up without reacting with increased social expenditures that might have headed off protectionist reactions. In 2016, the US electorate hit its boiling point.

The disconnect between the United States’ massive increase in trade exposure and minimal (if any) associated growth in the size of government is at the heart of the apparent turn toward protectionist politics this election year. When Bernie Sanders says the United States should be more like Denmark or Sweden, he is presumably referencing their much higher government spending to address issues of social and economic inequality that are, at least in part, a response to these countries’ deeper integration in the world economy.

Trade makes the United States better off as a whole, but evidence that the costs are unevenly shared is mounting. In this environment, both left- and right-wing populist candidates have been able to gain traction, in no small part by attacking free trade. But trade may not be the culprit, per se: Many advanced economies sustain much higher levels of trade exposure. But they do so with more expansive programs of social expenditure to address the resultant instability and dislocations. Politicians across the US political spectrum will have to recognize this if the old bipartisan commitment to free trade is to survive.