In his first two years in office, Trump introduced a series of highly publicized tariffs resulting in greater levels of trade protection for certain US sectors and against particular trading partners.  New US tariffs had the potential to benefit some American workers, who now faced less competition with imports.  But trading partners immediately responded with tariff retaliation, especially against US agricultural exports, which harmed US workers in other parts of the economy.  The US agricultural sector was so hard-hit that by the summer of 2018, the Trump administration announced a $12 billion subsidy program to compensate some of the adversely affected US farmers.

The Trump tariffs and their after-effects disrupted aspects of the US economy. US consumers paid a hefty price (Amiti et al. 2019, Cavallo et al. 2019), and efforts have already been made to compute the implied loss to real wages (Fagjelbaum et al. 2019).

Our new study (Blanchard et al. 2019) focuses on the local labor market channel and finds that Trump’s trade war may have been a significant contributor to the Republican Party’s weak showing in the 2018 House elections. Republican support declined in areas most exposed to the retaliatory tariffs, and this was only partially offset by the summer 2018 agricultural subsidies. At the same time, there were no discernible GOP gains from the new protection afforded by Trump’s own tariffs.  Translating our estimates into congressional outcomes, the trade war may be responsible for five (of the 40 total) House seats lost by Republicans in the November 2018 midterm election.

We benchmark our estimated voting effects of the trade war against another major issue in the 2018 election, namely, health care. Voters’ concerns over Republican’s attempted repeal of the Affordable Care Act (ACA) are estimated to account for eight lost Republican House seats. Combined, the trade war and health care may have influenced enough votes in pivotal districts to shift as many as 15 seats to the Democrats in 2018.

Our analysis examines the relationship between local exposure to the trade war and US voting patterns.  Specifically, we investigate whether differential county-level exposure to changes in US tariffs, trade retaliation, and the 2018 US agricultural subsidies is systematically correlated with county-level changes in Republican Party vote share between the 2018 and 2016 elections in the House of Representatives.[2]

In order to isolate the relationship between voting and the trade war, we control for the potential influence of heath care as a policy issue in the 2018 election, and a host of other socio-demographic characteristics that are well-known influences in US elections.  We also allow for (and find) political mean reversion—counties that swung heavily Republican in the prior 2014 and 2016 elections tended to swing back toward the Democrats in 2018, all else equal.

Trump tariffs, retaliatory tariffs, and the 2018 US farm subsidy package

Using detailed data at the county level, we construct measures of local employment exposure to each of the three sets of policies related to the trade war: Trump’s tariffs, retaliatory tariffs imposed by major trading partners, and Trump’s summer 2018 farm subsidies. Panels A-C of Figure 1 show the geographical distribution of each of these trade war ‘shocks’ across the US. Our econometric regression then investigates whether each can be linked to the change in votes cast in 2018 relative to 2016.[3] 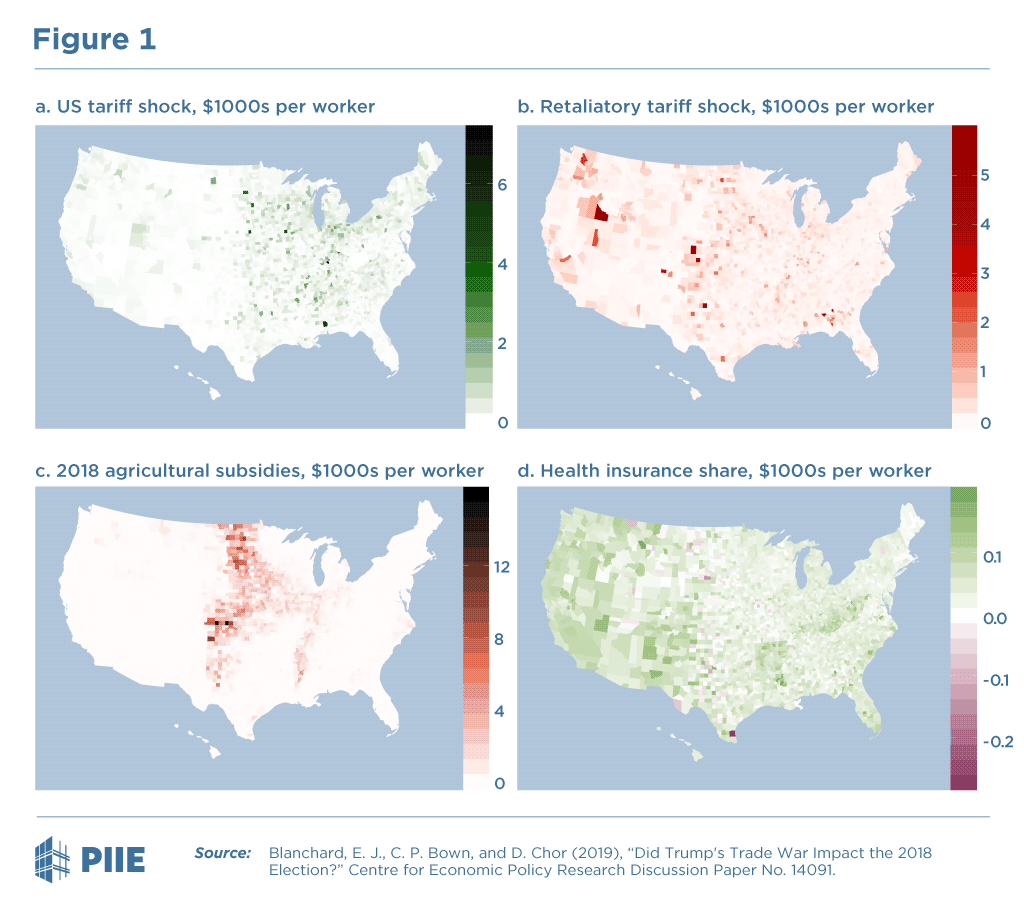 Trump’s tariffs appear to have had little influence on Republican voting outcomes in 2018. Between February and October 2018, the administration imposed new tariffs on solar panels, washing machines, steel, aluminum, and on $250 billion of imports from China. While we find a positive relationship between these tariffs on the change in the Republican vote share, the magnitude is small and not statistically different from zero.

However, Republican candidates lost vote share in counties where employment was concentrated in products affected by retaliatory tariffs. Canada, Mexico, and the EU hit back with tariffs, but most notable was China’s retaliation over what had been $12 billion of US soybean exports in 2017. Our findings suggest that Republican support was negatively impacted by retaliatory tariffs against US agricultural exports, and by China in particular. Importantly, the potential political influence of retaliatory tariffs was strongest where it may have mattered most—in ‘swing’ counties where the election outcome had been closest in the 2016 presidential election.

Finally, the agricultural subsidies rolled out in the summer of 2018 appear to have shored up Republican support, but the estimated effect was small. The formulaic Market Facilitation Program disbursed $12 billion of subsidies based on production or inventory from prior years, designed to benefit those US farmers who lost most as a result of tariff retaliation. The subsidies were geographically concentrated in a small number of counties, as is clear from Panel C of Figure 1.

Health care and potential repeal of the Affordable Care Act

Over the course of 2017-2018, the Republican party made a concerted attempt to repeal and replace ACA, or ‘Obamacare’. According to the Congressional Budget Office and Joint Committee on Taxation, the proposed legislation would have increased the uninsured population by 17 million people in 2018 alone, or 6 percentage points relative to 2017.[4] While the ‘repeal and replace’ efforts were ultimately unsuccessful—due to the late John McCain’s controversial and deciding vote in the Senate in July 2018—health care nevertheless remained a critical issue in the 2018 midterm elections.

Our results indicate that Republican candidates fared considerably worse in the 2018 election in counties that had experienced larger expansions in health insurance coverage following enactment of the ACA in 2010. This suggests that voters were concerned about losing recently acquired health insurance, consistent with earlier evidence that health care was a highly salient issue in many House races (Blendon et al. 2018, Wesleyan Institute for Advertising Research 2018). Notably, the recent gains in health insurance coverage were more evenly spread across the US (Figure 1, Panel D) compared to the more geographically concentrated impact of the trade war shocks (Panels A-C).

Counting up the votes

Our regression estimates indicate a robust but modest relationship—on average—between the decline in GOP support and local exposure to the trade war and health care. For example, a one standard deviation increase in a county’s exposure to tariff retaliation translates to a 1.2 percentage point loss in Republican vote share, or roughly 15 percent of the observed average decline in Republicans’ vote share of 6.4 percentage points across counties in 2018. Yet, these average effects overlook the geographic incidence of the tariffs—some counties were hit much harder than others.

Our next step is to combine estimates of the average political impacts with underlying data on local-level exposure to predict counterfactual electoral outcomes. Specifically, we ask how many more seats Republicans might have won in the absence of the trade war, minus concerns over health insurance, or ignoring both issues altogether.[5]

There are three key results.

Our paper is an ex-post evaluation of the extent to which the trade war and concerns over health care policy may have influenced the 2018 House elections. We cannot and do not claim causal identification.  The systematic patterns we find in the data are robust and consistent with a causal relationship, but we cannot completely rule out other unobservable factors that may have driven both the pattern of 2018 tariffs and changes in voting patterns.[6]

Our counterfactual scenarios require assumptions about how to apportion estimated changes in voting for the 12 percent of counties that span multiple Congressional Districts (CDs). This issue is important given potential gerrymandering.  In the results reported above, we apportion estimated county-level vote changes according to the reported actual number of votes received by each candidate (Democrat or Republican) in 2018, in each county-by-CD partition. We consider alternative approaches in the county-to-CD apportionment in the paper and find commensurate results.

Finally, while tempting, it is imprudent to use these results to assign specific House election defeats to the trade war. From the voting data, we can identify districts in which a particular Republican candidate's margin of defeat was narrow. And from our analysis, we can identify cases in which the local tariff shock was big enough to account for this margin of defeat.  But this evidence is suggestive, not diagnostic. For any seat with a narrow margin, there are many factors that could have tipped the election over the edge.

Cavallo, A, B Neiman, G Gopinath, and J Tang (2019), “Tariff Passthrough at the Border and at the Store: Evidence from US Trade Policy”, NBER Working Paper 26396.

1. Although there was a 41-seat swing overall towards the Democratic Party in the composition of the 116th Congress relative to the 115th, this count includes the Pennsylvania seat won by Conor Lamb in a special election on March 2018. The actual vote swing on election night in November 2018 was 40 seats.

2. We compute the ‘two-party vote share’, defined as the number of Republican votes divided by the total votes for Republican and Democratic candidates. Also, we undertake our analysis at the county level, since that is the most geographically fine level for which voting and socioeconomic data are available. Our analysis is forced to exclude Alaska, which does not report county-level voting outcomes.

3. We focus on the direct employment channel of exposure, acknowledging that trade policy may have secondary economic impacts on voters through changes in consumer prices or via employment in downstream, import-using industries.  But since these additional channels cannot be separately identified with our data absent additional modeling assumptions, we focus on only the more cleanly measured direct employment effects.

4. The US Congressional Budget Office (2017) reported that legislation repealing ACA would have increased the number of uninsured in 2018 to 43 million from 26 million under current law, out of a total of 274 million Americans under age 65.

5. This part of the analysis excludes Pennsylvania, which saw significant redistricting that makes the Congressional District boundaries non-comparable between 2016 and 2018. Excluding Pennsylvania, the Republicans suffered a net loss of 36 seats in the 2018 House elections.

6. For instance, the tariffs were not unrelated to US political considerations. Fajgelbaum et al. (2019) and Fetzer and Schwarz (2019) present evidence that the geographic incidence of the 2018 tariffs is correlated with Republicans' prior election performance.  While we explicitly control for prior election performance, other unobservable factors could also be at work.