President Donald Trump installed several officials with backgrounds supporting the US steel industry, notably Commerce Secretary Wilbur Ross and US Trade Representative Robert Lighthizer. In their previous careers, both have looked after the interests of US steel producers and fought hard to keep foreign steel out of US markets, especially in recent years as excess steel capacity throughout the world has suppressed steel prices and made foreign steel products attractive to US manufacturers.

But in a little-noticed stumble in their campaign against steel imports, the Trump team was dealt a setback in July 2020. The US Court of International Trade (CIT) issued a landmark decision rebuffing Trump’s attempt to use Section 232 of the Trade Expansion Act of 1962 as an ad hoc sanction against Turkey, supposedly because Turkish steel threatens US national security.

In Trump’s view, Turkey was exporting too much steel to the US market and therefore, in August 2018, he raised the ad valorem tariff to 50 percent on steel imports from Turkey while maintaining tariffs on steel products from other countries (except Canada and Mexico) at 25 percent.[1] The decision to selectively call out Turkey with double the tariff was rejected by the CIT both for procedural failures and for violating the constitutional equal protection clause.

Prior administrations had invoked US trade remedy laws against subsidized and dumped steel—characterized as “unfair trade.” The Trump administration continued apace, and as of July 1, 2020, a total of 271 antidumping and countervailing duty orders curtailed US imports of iron and steel products, of which 66 were aimed at China, arguably the main contributor to the world steel glut. These traditional restrictive trade measures have largely kept Chinese steel out of the US market. In 2018, China supplied only 2 percent of total US steel imports.

But restricting “unfair” imports from China and other countries was not adequate to bolster the fortunes of the US steel industry. As the figure shows, US steel prices were weak and import volumes remained high through 2017. Searching for a comprehensive solution, Trump’s team then invoked a rarely used national security statute. In March 2018, citing Section 232 of the Trade Expansion Act of 1962, President Trump issued Proclamation 9705 to levy an ad valorem tariff of 25 percent on steel imports from all countries except Canada and Mexico. 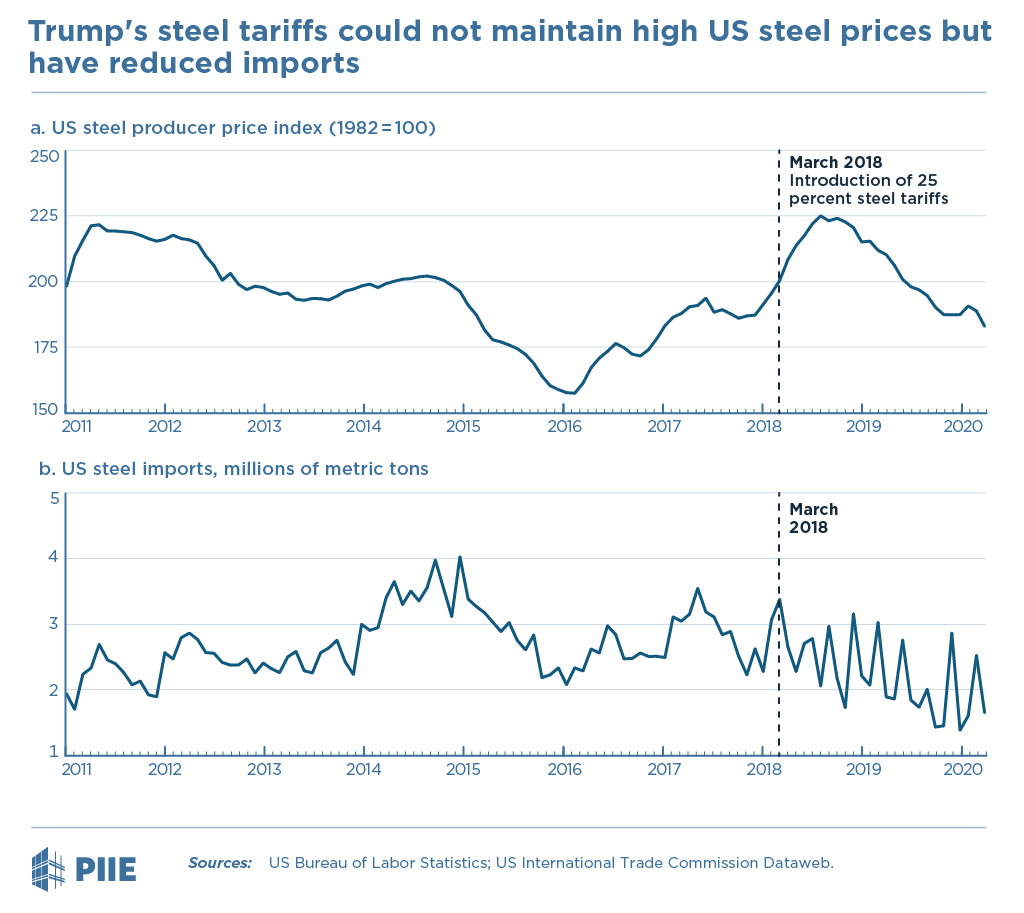 From Trump’s standpoint, Section 232 national security tariffs wonderfully bypassed not only Congress but also court review. US courts—right up to the Supreme Court—have rarely questioned presidential actions to invoke either national security or a national emergency as justification for restricting international commerce. Few defense experts agree that imported steel threatens US national security. But Section 232, generously interpreted by the courts, gave Trump a free hand to pursue his obvious goal: curtail imports and boost domestic prices. And by invoking national security where it had no legitimate application, Trump skirted World Trade Organization (WTO) rules for assisting a distressed industry.

Yet, right from the start, Trump undercut his own price-boosting objective by exempting steel imports from Canada and Mexico. Later, Trump struck deals with Australia, the European Union, South Korea, Brazil, and Argentina to allow their steel into the US market. The Canadian and Mexican exemptions were necessary concessions on the path to the US-Mexico-Canada (USMCA) agreement, which replaced the North American Free Trade Agreement (NAFTA). Exemptions for the European Union, Australia, and South Korea were meant to hold alliances together. As well, waivers were handed out to a few desperate steel users. All told, the exemptions and waivers covered 31 percent of US steel imports in 2017.[2] From the standpoint of US foreign relations and American steel consumers, these exemptions were a blessing. But they thwarted Trump’s goal of rescuing US steel producers from the hard realities of a free market, where fair competition—no subsidies, no dumping—often drives prices down. As the figure shows, starting in mid-2018, both steel prices and imports were on a downward trend, which continued as the pandemic disrupted the economy since the beginning of 2020.

The CIT ruling in July not only added insult to market forces. It also demonstrated the mishmash resulting from Trump’s transactional approach to industrial policy. Fundamentally, Trump believes he can tailor a deal to satisfy multiple objectives—in this case, show love to steel producers, avoid giving costly offense to neighbors and allies, and grant concessions to needy steel buyers. Perhaps the president found an optimal political mix, but the economic costs are substantial, and even countries that received exemptions criticized Trump’s violation of the WTO rulebook. Future presidents should view the steel saga in its true light: a regrettable and ineffective lifeline to a distressed industry.

1. The higher tariffs on Turkish steel remained in place until May 2019, when Trump reduced them back to 25 percent.

2. The 31 percent figure is based on import values.