President Trump’s steel and aluminum tariffs finally arrived at 12:01 am on Friday morning, March 23. US Customs and Border Protection started collecting duties from countries that exported $18 billion of the affected metal products to the United States in 2017.

Yet, the saga is still only at an early phase. Trump’s tariffs are now not only likely to inflict costs on the American economy, they have also resulted in new rounds of uncertainty. His meandering approach to trade policy seems intent on creating a crisis. Countries are now being forced to act—and react—outside of the normal channels of the rules-based trading system. There is great potential for responses to escalate quickly and damage everyone, including the United States.

Here are five things you need to know.

1. Trump’s March 23 tariffs cover a lot of trade, albeit less than he announced originally

In economic terms, the duties that Trump imposed on March 23 hit a large amount of trade. His 25 percent steel tariffs apply to countries that exported $10.2 billion of steel products in 2017, and his 10 percent aluminum tariffs apply to $7.7 billion. For context, the tariffs that Trump imposed on solar panels in January covered an estimated $8.5 billion of US imports.

Yet the tariffs that Trump ultimately imposed on March 23 are different from what was originally announced at different stages over the previous month. They are also far from final.

In April 2017, nearly a year ago, the Trump administration initiated two investigations under Section 232 of the Trade Expansion Act of 1962. The administration’s highly secretive inquiries ultimately resulted in trade restrictions under the controversial legal justification that these imports threaten American national security.

The products under review were not revealed to the public until the White House released the reports of the investigations on February 16 of this year. They covered US imports of $31 billion of steel and $17 billion of aluminum in 2017.[1]

On March 1, Trump announced he would impose tariffs—25 percent on steel and 10 percent on aluminum—on all countries and products covered in the reports, or on $48 billion of trade.

On March 8, Trump’s first two “official” proclamations stated the tariffs would go into effect on March 23, but they would exempt Canada and Mexico. As a result, the tariffs would already exclude about one third—or $15.3 billion—of imports he had announced would be hit just a week earlier.

On March 22, Trump issued two additional, last minute proclamations—one for steel and one for aluminum—that further exempted the European Union, Australia, Argentina, South Korea, and Brazil, albeit only through May 1, 2018. Suddenly, roughly 63 percent of imports could be exempt.

Figure 1 updates which major trading partners are hit by the March 23 tariffs. Overall, Trump’s national security tariffs now apply to the source of only one third of steel and 45 percent of aluminum imports. 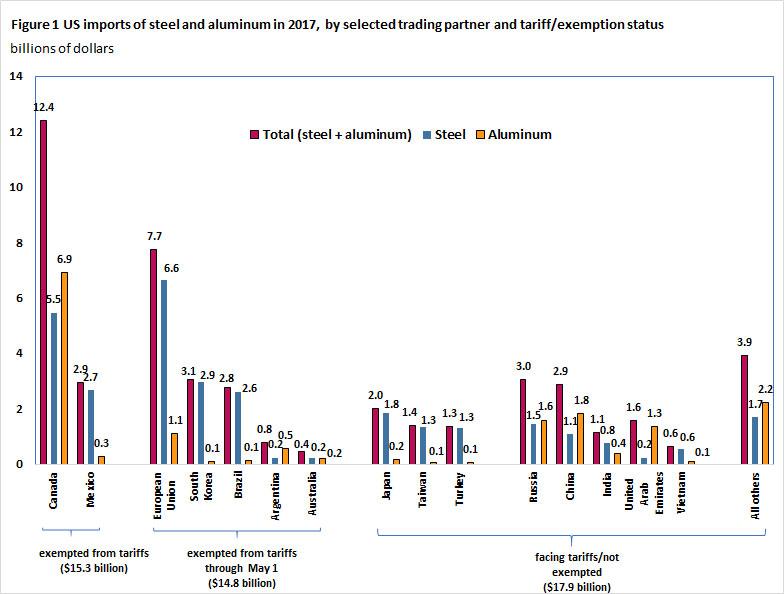 Trump has imposed tariffs under a controversial and rarely-used US trade law that provides him wide discretion that he is choosing to exercise. For one, there is no timeline or explicit criterion for ultimate removal of imposed trade restrictions. Furthermore, the administration’s changing description of who is to be covered—ever since details of the Commerce Department’s investigations were first made public on February 16—reflects their indiscriminate application of the policy.

More broadly, this law provides the president the authority to arbitrarily add or subtract trading partners, raise or lower the tariffs, or change the scope of targeted products. Trump can also restructure trade restrictions as he sees fit; his March 22 proclamation even anticipates that he may do so, “[i]f “necessary and appropriate, I will consider…[implementing] a quota as soon as practicable.”

Trump has tasked the US Trade Representative, Robert Lighthizer, with negotiating potential tariff exemptions for trading partners. Commerce Secretary Wilbur Ross is to establish a process that may grant the exclusion of specific products. But the criterion to be used to evaluate reprieve from the tariffs appears vague and ever-shifting.

At various times, Trump has indicated exemptions would be based on national security and a partner’s willingness to confront China. For Canada and Mexico, he has separately indicated that exclusions may hinge on his assessment as to whether the NAFTA negotiations are proceeding successfully.

How such rationales can be invoked, when the original justification was to protect the domestic steel and aluminum sectors because of national security, is unclear. The discretion and nontransparent procedures also raise concern over their potential for abuse, arbitrary decision-making, and corruption.

The five US trading partners granted an exemption through May 1 have been kept guessing about what Trump is asking for and thus how to respond. EU Trade Commissioner Cecilia Malmström has said “the EU is certainly not negotiating anything under threat, especially when we don’t really know what it is.”

Thus, even allies may be preparing for a contingency in which Trump imposes tariffs on their exports after all. Malmström has called Trump’s tariffs an “economic safeguard in disguise”—meaning that it has nothing to do with national security and everything to do with protecting favored industries. She has announced a multi-pronged challenge should the European Union’s $7.7 billion of metal exports ultimately be caught up in Trump’s trade restrictions.

The EU approach would include some almost immediate retaliation—against $3.4 billion of US exports of products like cranberries, bourbon, and blue jeans—to “rebalance” the trading relationship.

4. Trump is not exempting strategic partners like Japan, Turkey, and Taiwan, as well as minor developing country suppliers

Importantly, Trump’s tariffs also hit imports from poor and small countries. This is noteworthy and very different than if the tariff had been applied under the separate “safeguard” law. Tariffs applied under that law (Section 201) are typically supposed to exclude imports from de minimis developing country suppliers.

Trump’s tariffs may also lead many of these countries to respond. For them, his trade restrictions are even worse than if Trump had followed through with his original, March 1 announcement of imposing tariffs on everyone. These exporters now face discriminatory treatment in the US market—not only relative to American companies, but also vis-à-vis metal-producers in the seven trading partners that Trump exempted.

Trump’s steel and aluminum tariffs did not exempt China. Yet China’s exports of steel and aluminum to the United States totaled only $2.9 billion in 2017. Put differently, only 6 percent of the $48 billion of US imports of products covered by Trump’s national security investigations arise from China.

China’s exports are relatively small because more than 90 percent of its exports of steel and aluminum to the United States were already covered by special tariffs imposed under other US trade laws of antidumping and countervailing duties.

Nevertheless, on March 23, Beijing announced plans to engage in a limited retaliation—in response to Trump’s Section 232 actions—that would cover about $3 billion of US exports. China indicated it may impose 25 percent tariffs on $2 billion of imports on products such as pork and recycled aluminum, as well as 15 percent tariffs on $1 billion of imports of products such as fresh fruit, dried fruit and nuts, wine, ethanol, ginseng, and seamless steel pipes.

The $3 billion in retaliation is roughly in line with the amount of Chinese steel and aluminum exports hit by Trump’s tariffs. While Beijing may be adopting a variant of the “rebalancing” approach that the European Union originally developed in their response to Trump, legal scholars debate the questionable WTO-legality of this sort of retaliation.

Equally important, even though its retaliation would be limited, Beijing’s action is not an attempt to de-escalate trade tensions.

Retaliation would impose costs on American farmers, companies, and workers that do not benefit at all from Trump’s tariffs on steel and aluminum. Unfortunately, the administration seems unfazed by these potential costs associated with Trump’s own actions. Ross said on March 22, “there will be some ultimate retaliation but I don't think it's going to be the end of the earth.”

Trump’s March 23 tariffs clarified very little in the ongoing steel and aluminum drama. Furthermore, his actions complicate the separate March 22 announcement of new tariffs on up to $60 billion dollars of imports from China. It muddies the water—both vis-à-vis Beijing, which is subject to the action, and with partners such as the European Union and Japan that Washington needs to coordinate an effective policy response to concerns over China’s theft of intellectual property and forced technology transfers.

Because Trump has granted himself such wide latitude in the products he is sanctioning, and in the rationale he has evoked, US trading partners are themselves uncertain over how effectively to respond. Do they negotiate for exemptions, retaliate with actions of their own, or wait and see what happens next?

There has rarely been such a period of confusion and risk to the trading system. And Trump’s incipient and self-inflicted trade crisis is unlikely to get any clearer in the weeks and months ahead.

1. Because of revised steel data provided by the US Department of Commerce, these estimates are slightly larger than those originally presented in Chad P. Bown, “Trump's Steel and Aluminum Tariffs: How WTO Retaliation Typically Works," PIIE Trade and Investment Policy Blog, March 5, 2018.