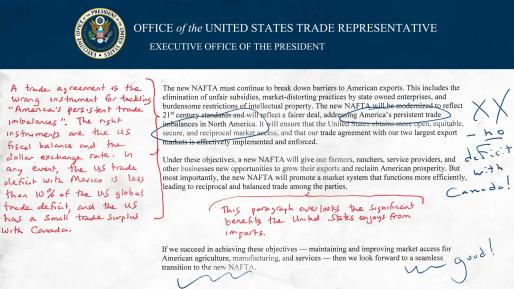 Trade experts C. Fred Bergsten and Gary Clyde Hufbauer shared their notes on the Trump administration's recently released document on NAFTA objectives. Here are brief thoughts on select sections of the US strategic plan in their own handwriting. Click on the notes to zoom in, then hit your browser's back button to return.

The US objectives do not recognize how Mexican and Canadian imports play a substantial role in driving US economic growth by lowering prices, increasing productivity, and allowing more product options. While the US trade deficit has increased since 1994, the bilateral deficit with Mexico is only a small part of its global deficit. The document solely blames NAFTA for job displacement without context, leaving out the significant economic growth in the decade after the deal and the fact that technology has caused far more job displacement than trade.1

Regardless of these facts, free trade agreements have virtually no impact on trade deficits. If the administration is looking to eliminate trade imbalances, they should focus on the total US deficit and accept that trade agreements are not the right tool to do this. The best way to reduce the global deficit is to balance the US budget so we no longer consume much more than we produce, and to monitor the exchange rate. The strategy of a trade agreement should be, and traditionally is, to increase trade and boost the overall economy, not reduce trade deficits.

From Trade in Goods

Again, the Trump administration has made reducing bilateral US trade deficits its primary goal, a strategy that makes no economic sense and could disrupt the talks. If the United States tries to restrict imports from Mexico, US importers would simply buy the same goods from other countries. There would be no reduction in the overall US deficit. Mexico would also be sure to retaliate against any effort to curb imports, hurting US farms and other industries that rely on exports to and supply chains with Mexico.

The objectives imply that for a trade deal to be fair, there must be balanced trade. But all countries have surpluses with some of their trading partners and deficits with others since each country is more efficient at producing certain products. That is the way trade works.

NAFTA has been a huge boon to US agriculture so it is a good sign if the United States is willing to further reduce tariffs. The administration should look to the Trans-Pacific Partnership (TPP) agreement for what a productive renegotiation in agriculture could include.

From Customs, Trade Facilitation, and Rules of Origin

There are several times in the document that indicate US support of the World Trade Organization (WTO), which is promising given President Trump's previous criticisms of the group that is responsible for the modern rules-based trading system.

Higher de minimis thresholds, which define how much one can import duty-free and with minimal customs paperwork, would encourage shopping at US stores and online vendors while also increasing the volume of low-value shipments between the countries.3

NAFTA defined rules of origin (ROO) to set how much of a good's value must originate in NAFTA countries to qualify for zero tariffs. Tightening these rules or creating new ones that require more US content in goods could backfire and lead to lower regional content in final goods if importers opt to forgo NAFTA preferences because compliance costs are higher than trading under most favored nation tariffs.

From Trade in Services, Including Telecommunications and Financial Services

Including more services under the trade agreement would play on US strengths since it is the largest exporter of services in the world by volume.4

From State-Owned and Controlled Enterprises

Under WTO regulations, certain government subsidies to industries are prohibited since they give an unfair leg up to domestic producers. For NAFTA, the United States wants to go beyond what the WTO requires and ensure that state-owned enterprises (SOEs) observe normal commercial behavior in their dealings with suppliers and buyers. 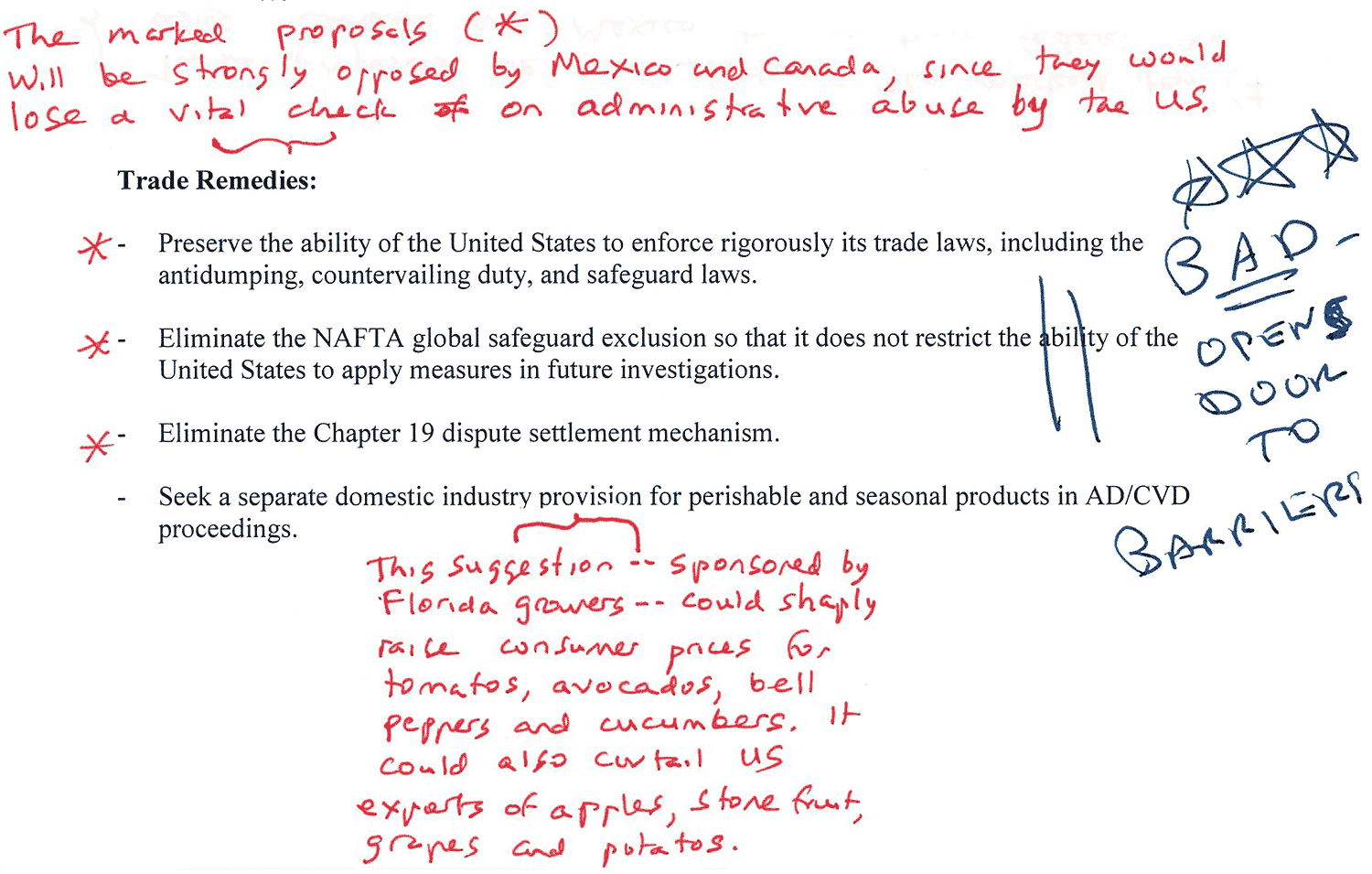 These objectives would make it easier for the United States to restrict imports from Canada and Mexico in what could be a tipping point in negotiations for the two countries. NAFTA is designed to expand free trade, but this may well eliminate previous liberalization gains. An increase in the US use of trade remedies would likely result in the same treatment by Mexico and Canada against US exports, possibly starting a trade war.5

This was one of the few statements that acknowledged the NAFTA countries as a team to improve their competitiveness in the global marketplace rather than adversaries. 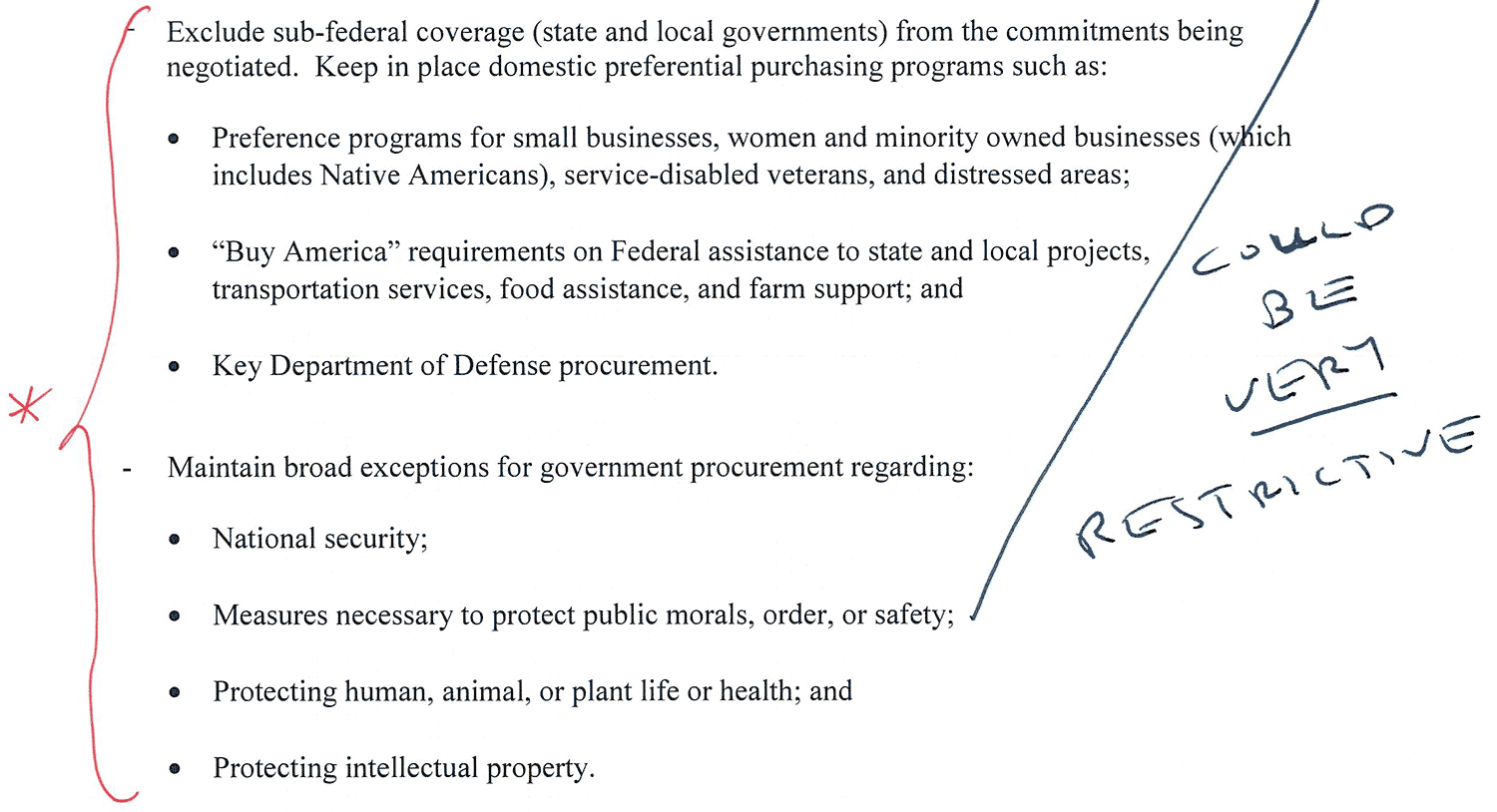 The United States wants Canada and Mexico to open opportunities for government contracts to US firms, but do the opposite for Canada and Mexico in the United States. The "Buy America" policies requested here would limit the ability of individuals, firms, or public agencies to get the best combination of price and quality of goods and services and could lower productivity. This rhetoric could also easily provoke the same economic nationalism with our trading partners, closing markets off to US exports and inadvertently costing American jobs.

There have been dramatic changes in the energy sector (see chapter 7) for NAFTA countries in the last 20 years, such as Mexican energy reforms, US natural gas production, and Canadian oil sands extraction on a large scale. An updated agreement could promote deeper energy cooperation and enhance North American competitiveness in the world economy.

Currency manipulation is an unfair trade practice that can have huge effects on trade balances (unlike tariffs). While Canada and Mexico have not been guilty of the practice, including rules against currency manipulation in NAFTA would set a useful precedent. The United States should also adopt a new policy of countervailing currency intervention to prevent the practice. This means if a country starts excessively selling its own currency to buy dollars, the United States would buy an equal amount of the offending country's currency to neutralize the effect of manipulation on the exchange rate.

Notes have been edited to fit the screen. Here are the fully annotated documents from Gary Clyde Hufbauer and C. Fred Bergsten. For more of Bergsten's thoughts on the NAFTA objectives, read his blog post, "Trump's NAFTA Agenda: The Good, the Bad, and the Indeterminate."

1. Jobs added data from the US Bureau of Labor Statistics. For research on percent of jobs displaced by technology, see footnote 39 of The Payoff to America from Globalization: A Fresh Look with a Focus on Costs to Workers. Hufbauer's note on the US trade deficit with Mexico being less than 10 percent of US global deficit is for goods trade only.

2. By percent of GDP for 2015 and 2016. International Monetary Fund, World Economic Outlook.

5. For analysis on the provision for perishable and seasonal products, see Gary Clyde Hufbauer and Euijin Jung's blog post, "NAFTA Mischief in Fruits and Vegetables."