At the end of March, President Donald Trump signed an executive order directing the Commerce Department and the US Trade Representative (USTR) to assess the underlying causes of significant trade deficits, focusing on the alleged unfair trade practices of foreign countries.

This focus is misguided. While the aggregate US trade deficit may be of concern, it results from macroeconomic pressures. In contrast, bilateral deficits tend to be structural, and in recent years, some have become especially pronounced because of global supply chains and the way in which trade is measured.  A report exploring the macroeconomic causes and consequences of the aggregate trade balance would provide more insight. Singling out individual countries according to bilateral deficits may be of political use because we often interact with individual countries, but it does not make economic sense.

In terms of trade practices, the USTR already produces a report on foreign trade barriers. The 2017 National Trade Estimate report was nearly 517 pages long, featuring 20 pages on China and 16 pages on Japan. While it is worthwhile to identify US trade policy concerns with individual countries and work to alleviate them, it is unclear how much value added there is from repeating this exercise in the context of bilateral trade deficits.

The United States imports more than it exports, which has resulted in a trade deficit of roughly $500 billion or 3 percent of GDP in recent years. What causes this disparity? The United States runs a trade deficit because its citizens spend more than they earn and finance the difference with foreign credit. In 2015 (the most recent year with full data), the households, firms, and government in the United States earned $16.9 trillion and spent $17.4 trillion on goods and services, resulting in a disparity of $500 billion.

The trade deficit is a macroeconomic phenomenon: Unless the United States increases earnings and/or reduces spending, the disparity of $500 billion will not go away. In fact, trade policy has a negligible effect on the trade deficit. Changes in overall earnings or spending will be required to reduce the trade deficit.

The US trade deficit has grown over time because the country as a whole saves less than it did in the past.  The personal saving rate fell from 8 percent in early 1990s to 5.5 percent in recent years. At the same time, the government deficit expanded. Unless savings rise or investment falls, the aggregate trade deficit will not be reduced. From this perspective, policies that encourage people, businesses, or the government to save will have a bigger impact on improving the trade deficit than trade policy.

The overall imbalance must fall on some countries, creating significant bilateral deficits in some cases. These deficits are a symptom of the aggregate trade balance—not its cause.

Bilateral deficits have more to do with country characteristics than unfair trade practices. For example, the United States has a large trade deficit with Germany and a large surplus with the Netherlands. Both countries have the same trade policy under the European Union. Thus, the very same trade policy that is associated with Germany’s big surplus with the United States is also producing a big deficit for the Netherlands.

So why does the United States run a deficit with one country and a surplus with the other? There are several explanations, an important one of which is structural. Germany makes a lot of goods Americans want, like cars and machinery, while Americans make a lot of goods the Netherlands wants, like medical equipment and pharmaceuticals. The United States tends to run bilateral deficits mainly with countries that produce things it likes or needs. For example, as long as the United States uses more oil than it produces, it will run a trade deficit with some oil producers.

Bilateral imbalances are also not a good indicator of trade frictions because they are magnified by global supply chains. Larger bilateral surpluses and deficits are an artifact of the way trade is measured. Trade is measured in gross terms, which means that even if the value added in a country is very low, the value of its exports can be large if it is the final stop in the production chain. Consider an iPhone assembled in China using US technology and Asian parts and exported to the United States. The full value of the phone will be counted in Chinese export statistics, yet Chinese value added is less than 4 percent of its export value (Xing and Detert 2010).

The United States benefits from global supply chains, even when they are associated with trade deficits. For example, US companies have developed a strong regional supply chain with Mexico. Labor-intensive inputs from Mexico allow US manufacturers to be more competitive in the global economy. In the transport sector, for example, three quarters of exports and half of imports are parts and components. Competitive US production is dependent on specialization across countries by stage of production, where the United States does the high-skill stages and Mexico performs the low-skill stages. Even a country like Germany, despite its large aggregate trade surplus, has a trade deficit with its sources of labor-intensive inputs in eastern Europe (Amiti, Freund and Bodine-Smith 2017). The US-Mexico supply chain helps make North American factories competitive with European and Asian factories.

Any study of bilateral deficits will thus have to consider carefully how global supply chains affect trade.

The aggregate deficit may be a cause for concern

While bilateral deficits are of little concern, there are reasons to worry about countries that run persistent aggregate surpluses and intervene to lower the value of their exchange rates.

Given that trade is largely manufactures, the aggregate US trade deficit does mean that there are some lost jobs, though only a fraction of total loss in manufacturing jobs comes from trade—automation and technology are more important (see, for example, Lawrence 2013, Hicks and Devaraj 2017). In good times, the trade deficit can help reduce growth and inflation and stabilize the economy, but in hard times it may be a concern.

There are also reasons to be concerned about the aggregate deficit because of long-run sustainability. The fact that the United States is a net borrower could become a problem because it is accumulating debt. The United States now has roughly $8 trillion in net debt or about 45 percent of GDP (Bergsten and Gagnon 2017). The long-term causes and consequences of persistent trade deficits need to be better understood, and potentially will require a policy solution, but it is unlikely to be found in the unfair trade practices of foreign countries.

The one exception is when countries with large surpluses and ample foreign reserves intervene in currency markets to reduce the value of their exchange rates. The problem is that such beggar-thy-neighbor policies divert demand from the United States and other countries with flexible exchange rates. The overvalued exchange rate makes imports relatively cheap and exports expensive, depressing the trade balance and placing a drag on GDP. On the financial side, as a result of stronger consumption and weaker production, savings are reduced.

While there are several causes for the dollar’s tendency towards overvaluation, the fact that the dollar is the world’s reserve currency is the most important. As global financial flows have increased, the dollar’s role has become ever more important and demand for dollars has grown. But, some countries have used undervalued exchange rates to promote exports. Such policies have a negative spillover on the rest of the world and should be considered in the context of a report on the trade deficit.

Trade policy has only a marginal effect on the trade balance

Unlike real exchange rates, trade policy changes have only marginal effects on the trade balance.

Figure 1 below shows average applied tariffs and average trade balances from 2012 to 2015 (the most recent period) for 183 countries. The vertical axis shows the trade surplus or deficit as a percent of GDP, and the horizontal axis shows the simple average applied tariff. Average tariffs are negatively correlated with the trade balance. Countries with higher tariffs have, if anything, larger deficits. Even focusing on countries with relatively low tariffs, like the United States, there is no evidence that openness expands the trade deficit. 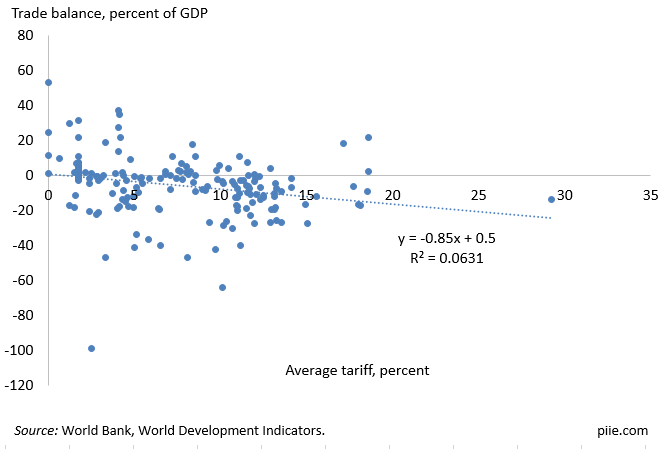 The aggregate US trade deficit may be of concern, but it should be considered in the context of macroeconomic not trade policy. In contrast, bilateral deficits tend to be structural, and in recent years, global supply chains have changed the nature of trade, magnifying some bilateral imbalances. Thus, a report exploring bilateral trade deficits must also consider the macroeconomic causes and consequences of the aggregate trade balance and take into account trade in value added—not only gross trade flows. The report should also indicate how it differs from the one the USTR already produces, the National Trade Estimate Report on Foreign Trade Barriers.

Hicks, Michael, and Srikant Devaraj. 2017. The Myth and Reality of Manufacturing in America. Ball State University, Center for Business and Economic Research.

Xing, Yqing, and Neal Detert. 2011. How the iPhone Widens the United States Trade Deficit with the People's Republic of China. ADBI Working Paper No. 257, (May). Tokyo: Asian Development Bank Institute.