By now the Trump administration’s many explosive announcements of new tariff restrictions on US trading partners have come to seem almost routine. But the imposition of 10 percent tariffs on another $200 billion of imports from China, announced on July 10, was anything but mundane, even by Trump’s standards. The scale of imports covered by this announcement is massive, nearly double the already considerable import coverage of Trump’s previous tariff actions combined.

Tens of billions of dollars of imported consumer products—including computers, furniture, lamps, and luggage—are targeted. And as with the tariffs on washing machines imposed in January, American household budgets will be squeezed by higher prices at the cash register and in their online shopping carts. Price hikes could make the annual family tradition of back-to-school shopping or furnishing that first apartment harder this year.

China’s government has sent no signals that it intends to de-escalate trade tensions; it could respond just as it has thus far by applying more tariffs on American exports. Like the higher prices for imported goods, punishing American exporters will damage new and different American companies and workers—the innocent bystanders in President Trump’s poorly justified trade war.

Any pretense of nuance is now gone. Trump’s tariffs can no longer be interpreted—if they ever were—as targeted or strategic to achieve specific ends in terms of actions by China. They are simply Trump’s fulfillment of a populist campaigner’s pledge to aggressively create a whole new paradigm for American trade relations with the world.

The Trump administration’s justification for the tariffs

The predicate for the July 10 announcement was established by President Trump’s June 18 request to the United States Trade Representative (USTR) to draw up a list of $200 billion of imports from China to be subjected to new 10 percent tariffs. Public hearings are scheduled for August 20–23, which could clear the way for them to be imposed as early as September.

A June 15 announcement from the USTR featured the Trump administration’s revised product lists for the first $50 billion of imports over which it planned to implement tariffs beginning on July 6.

Trump’s claim is that all of these tariffs are authorized after the result of an investigation under Section 301 of the Trade Act of 1974. Based on that inquiry, the administration concluded that China was engaged in unfair trade practices. These practices included requirements that American companies engage in joint ventures and forcibly transfer their technology to Chinese firms. The investigation also charged China with outright theft and unfair remuneration of American intellectual property, cyberespionage and stealing of industrial secrets, as well as harmful acquisition of American companies and technology through predatory and state-sponsored foreign investment.

Many trade experts would agree that China is guilty of some or all of these transgressions. But rather than turn to the World Trade Organization—and potential WTO dispute settlement—or negotiate a resolution to these disputes, the Trump administration has mostly resorted to threatening and then imposing new tariffs.[1]

President Trump’s June 18 statement also featured a threat to impose tariffs on a further $200 billion of imports from China—beyond the $50 billion list of June 15 and $200 billion list of July 10—if China retaliated yet again. Given that China has indicated it will retaliate, this latest step is hardly likely to be the administration’s last.

To understand the scale of these actions, consider this fact: These first two lists cover $250 billion of imports; the United States imported roughly $504 billion of goods from China in 2017.

The US import products subject to Trump’s tariffs

Figure 1 illustrates the types of goods subject to Trump’s newly announced tariffs, 23 percent of which target consumer products, a major change from the administration’s actions so far. Consumer goods made up only 1 percent of the products of the first $50 billion of imports from China subject to his announced tariffs. The rest affected intermediate inputs and capital equipment. The explanation for this shift lies in the fact that there are fewer and fewer such supply chain elements left to target. Consumer products are much of the imports from China that were left. 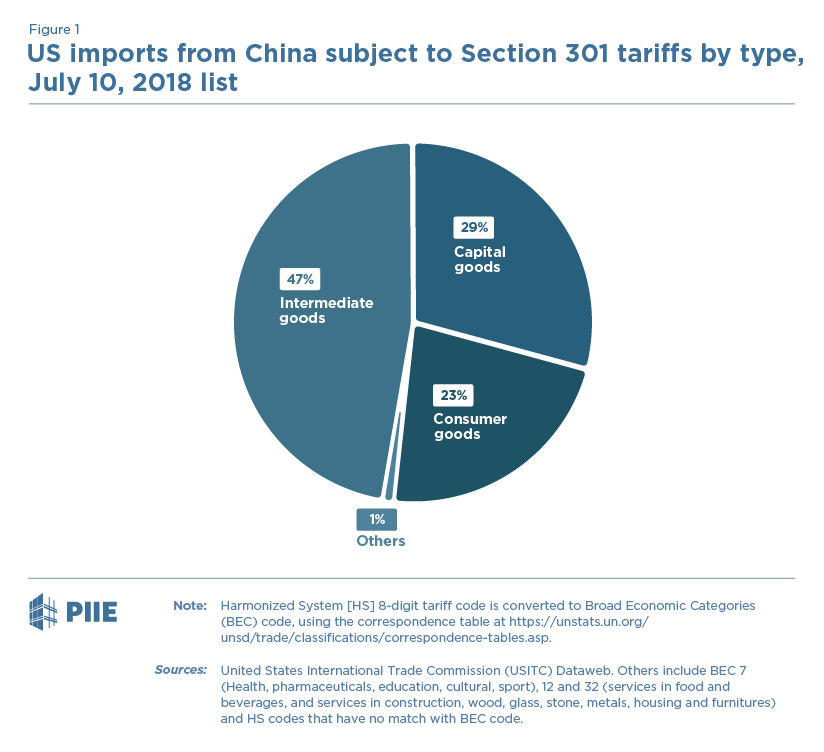 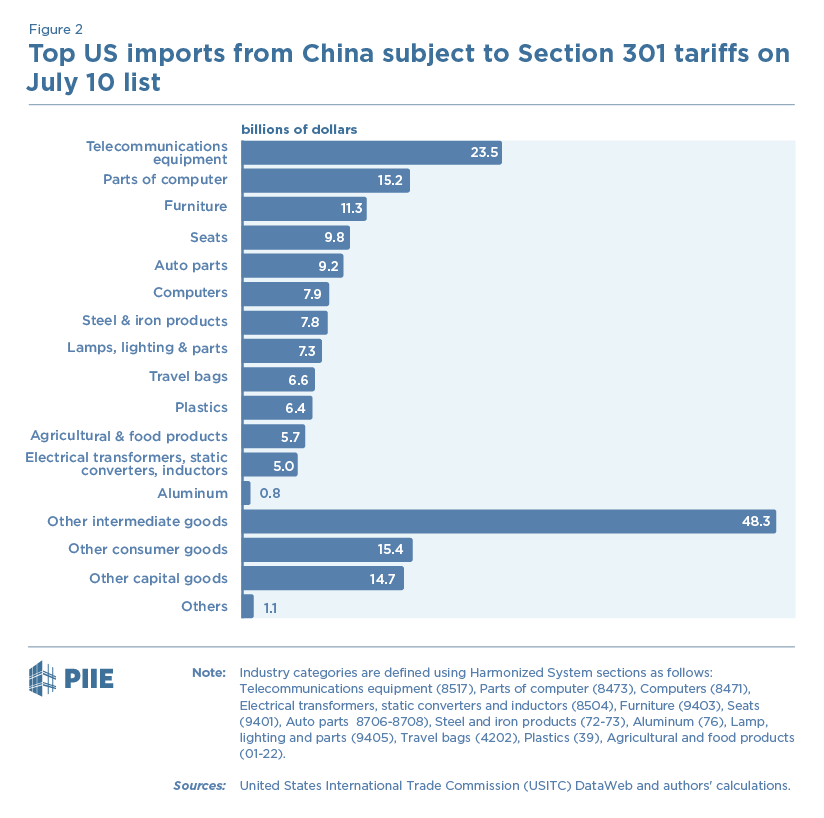 At least two sets of products are likely to be hit with multiple rounds of Trump’s tariffs. The first is aluminum, as Trump already imposed tariffs on $1.8 billion of aluminum from China on March 23, when it began its implementation of tariffs that it justified under Section 232 of the Trade Expansion Act of 1962 that $17 billion of imports of aluminum worldwide were a threat to American national security.[2]

Second, the $9 billion of auto parts imports from China are likely part of the Trump administration’s ongoing Section 232 investigation into whether an estimated $350 billion of imports of cars, light trucks, and auto parts from the world are also threatening American national security.[3] Trump could impose tariffs on imports of those products again after the conclusion of that investigation.

These new tariffs defy logic. Originally, the Trump administration argued that it was necessary to impose tariffs under Section 301 of the Trade Act of 1974, with the rationale that the United States must act to protect itself from China’s unfair trade practices. Trying to justify products like luggage, vacuum cleaners, chair seats, and furniture as necessitating invocation of Section 301 doesn’t pass the laugh test. Trump’s policies have once again distracted attention away from serious, legitimate concerns over what China is doing and refocused it entirely toward his own ill-conceived and poorly explained tariffs.

Overall, the product mix of this announcement is an even larger departure from the misguided strategy to impose tariffs on $50 billion of imports that Trump argued would address concerns over Beijing’s “Made in China 2025” industrial policy and unfair trade practices. Those tariffs were imposed on intermediate inputs and capital equipment; they simply raise costs for American companies and make it more difficult to access parts and components needed to produce competitively in the United States and compete with Chinese as well as western companies in the global economy. Those tariffs also attacked American companies’ involvement in supply chains that run through China, largely hurting American-based companies and workers supplying intellectual property and other inputs to their subsidiaries and affiliates operating in China.

When China predictably met Trump’s first $50 billion of tariffs with tariffs of its own, Trump’s response was Neanderthal-like in its punitive motivation, lashing back with more tariffs as if to say: Damn the costs to American households, full speed ahead. Not even the most alarmed trade experts anticipated that he would so boldly pass the costs of his antediluvian approach to trade on to American consumers at this level.

Gone are the days when many people assured themselves that Trump’s statements about trade in the 2016 campaign could be dismissed as empty rhetoric. And no one knows what the president will do next, except to pile tariffs on tariffs, leaving no clues as to how an effective trade policy or strategy will emerge.

1. The Trump administration did carve out one issue from the Section 301 report regarding a Chinese licensing law that it has brought to the WTO’s dispute settlement provisions. It is also potentially working with Congress to pursue changes to the Committee on Foreign Investment in the United States (CFIUS) procedures for screening Chinese investment.

2. A comparison of product codes reveals no overlap of steel products in this $200 billion Section 301 tariff list and the list provided in the Section 232 report on steel.

3. As of July 13, the exact product codes associated with the Section 232 investigation into of cars, light trucks, and auto parts have not been made publicly available.