Trump, China, and Tariffs: From Soybeans to Semiconductors

After weeks of on-again off-again threats, the Trump administration on June 15 produced its list of specific Chinese products on which it soon plans to impose tariffs. The newly announced tariffs will almost exclusively attack intermediate inputs and capital equipment that American companies import to remain competitive in the global marketplace. The major new addition to the tariff list is semiconductors.

Overall, the Trump administration’s proposed 25 percent tariffs would cover over $46 billion of imports from China in 2017. Tariffs covering nearly 70 percent of those imports—or $32 billion—would go into effect on July 6, 2018. Tariffs over the remaining $14 billion are subject to a short public review and comment period and may go into effect shortly thereafter. China plans to retaliate on an almost equivalent amount of US exports, mostly American agricultural products, as soon as Trump’s tariffs go into effect.

One conclusion based on the latest information is clear. The decision to impose these tariffs will raise prices for American consumers. Because the targeted products are intermediate inputs and capital equipment, the most adversely affected businesses are American-based companies dependent on imports from China to produce goods with American-made inputs sold competitively in the United States and around the world. Also undercutting the rationale for these latest actions, China stands to lose very little Chinese value-added content from retaliating against the US exports it has chosen. American workers, ranchers, and farmers will largely bear the costs of China’s tariffs associated with lost agricultural sales.

The June 15 announcement features two lists of products over which the Trump administration plans to impose 25 percent tariffs. Combined, the lists consist of 1,102 products and cover $46.3 billion of imports from China in 2017. 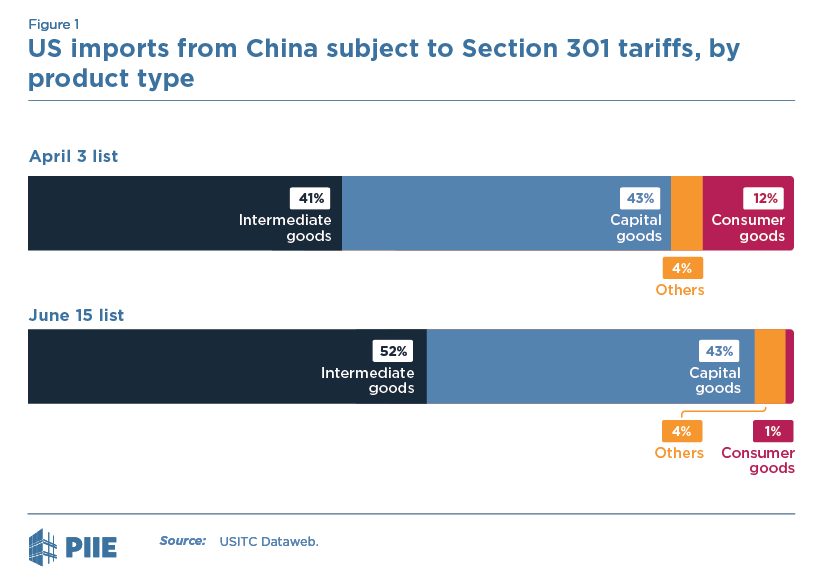 Most of the products on the initial list are still subject to Trump’s tariffs. That list consisted of 1,333 products and covered $46.2 billion of US imports from China in 2017. But the public pushed back considerably during hearings in May 15–17, 2018, explaining the costs to American economic interests.[1] In the end, 818 of the original 1,333 products remained on the list, totaling $32 billion of imports. Tariffs on these products are scheduled to go into effect on July 6, 2018.

Semiconductors and other products added

The June 15 list contains 284 additional products that would also be subject to 25 percent tariffs, totaling $14 billion in imports in 2017. Overall, 98 percent of newly added products are intermediate inputs and capital equipment.

Figure 2a illustrates the main added products. Top added products are semiconductors ($3.6 billion) and plastics ($2.2 billion), as well as other intermediate inputs and capital equipment. Semiconductors are found in consumer products used in everyday life such as televisions, personal computers, smartphones, and automobiles. 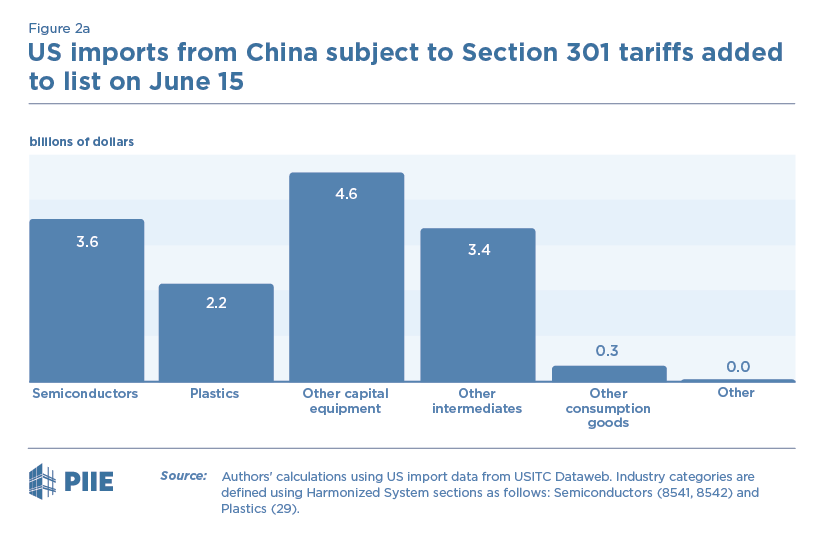 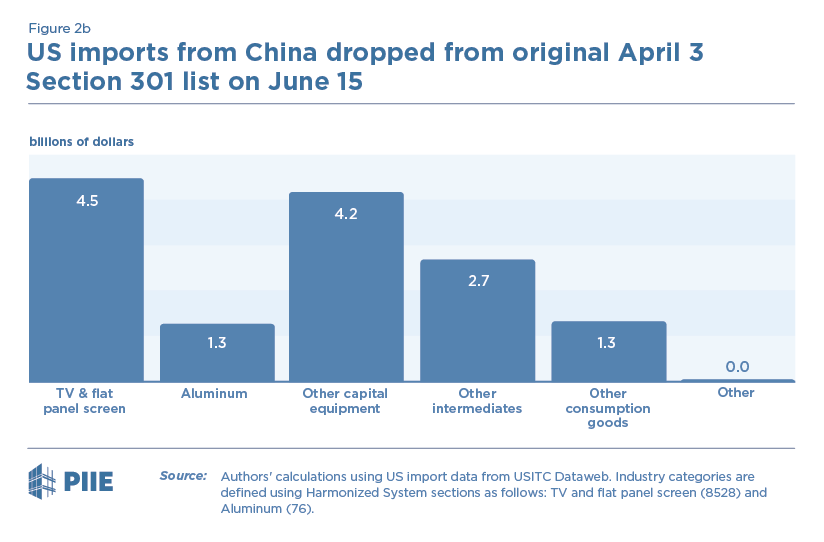 Televisions, aluminum, steel, and other products removed from April 3 list

China has made some changes to its retaliation list of June 15 relative to that published in April. Soybeans, which accounted for $12.4 billion of US exports, remained subject to tariffs. But China has added agricultural and food products, including $1.2 billion of fish and crustaceans, $0.5 billion of pork, $0.5 billion of fruits and nuts, and $0.4 billion of dairy products to the list with tariffs effective July 6. Of the newly added agriculture products, pork and fruits and nuts are already covered by China’s retaliatory tariffs to the US Section 232 measures, subject to tariffs of 25 and 15 percent, respectively.

China also added $4.4 billion of petroleum products and $1.6 billion of medical equipment to the list that is pending, subject to the Trump administration’s second list of tariffs going into effect. Aircraft—which accounted for $16.3 billion of US exports to China in 2017—were taken off the list.

Research by Mary Lovely and Yang Liang finds many of the products being targeted for tariffs are imports deriving from American- and non-Chinese based multinationals. This means that American value-added or value-added from American allies will suffer losses, including those who have done the research and development, as well as many who manufactured other subcomponents embedded in the imports from China. Non-Chinese producers of this content—no longer to be sold competitively in the American market—are thus also going to bear the brunt of these tariffs.

The Trump administration has noted some reasonable concerns in the Section 301 report regarding elements of China’s “Made in China 2025” industrial policy. Unfortunately these tariffs are not the solution. No negotiations are taking place, and even companies that are not suffering yet from China’s mistreatment will soon be hurting because of these tariff-induced higher costs.