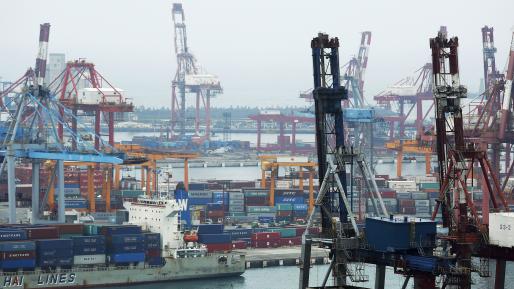 In a recent New York Times piece, Paul Krugman discussed two drivers of the "hyperglobalization" era that began in the mid-1980s and lasted until the global financial crisis of 2008. These drivers are improved transportation technology (shipping containers and airfreight) and lower trade barriers (tariff reductions) in developing countries. These factors combined to reduce trade costs and dramatically increase global integration.[1]

Krugman calls particular attention to the "trade policy revolution" in developing countries.[2] (At the time, the managing director of the International Monetary Fund (IMF), Michel Camdessus, called it the "silent revolution.") The opening of markets and reduction in trade barriers in China, India, Mexico, and many other countries during the 1980s and 1990s fundamentally reshaped the world economy. As Krugman put it, "We wouldn't be importing all those goods from low-wage countries if those countries were still, like India and Mexico in the 1970s, inward-looking economies living behind high tariff walls."

What accounts for this trade policy revolution? Many factors could have played a role, such as lobbying by exporting interests in each country or strong-arm tactics by the IMF and World Bank. But Krugman claims that ideas about policy brought about the change. Is that right?

Yes! After World War II, import substitution—an approach to economic development that emphasized protecting domestic industry with barriers against imports—was popular among economists and policymakers around the world. By the 1970s, as a result of theoretical developments (optimal policy ranking, effective rates of protection) and the successful experience of export-oriented countries (such as Taiwan and South Korea), support for this view diminished considerably. This sea change in economic ideas about trade policy—led by economists such as Bela Balassa, Jagdish Bhagwati, and Anne Krueger—eventually proved influential among policymakers in the 1980s.

Taiwan provides a concrete example of Krugman's claim that economic ideas matter for policy. As explained in a new PIIE working paper, How Economic Ideas Led to Taiwan's Shift to Export Promotion in the 1950s, economist S. C. Tsiang (then working at the IMF but acting in an unofficial capacity) convinced K. Y. Yin (a leading policymaker) to support a devaluation of Taiwan's overvalued currency, the end of foreign exchange rationing, and a dismantling of import controls. After heated debate within the Taiwanese government, Yin emerged victorious and was promoted to oversee far-reaching changes in the country's trade regime from 1958 to1963. Taiwan did not change its policy because of export interests, which were politically weak, or because international financial institutions insisted upon a different policy stance. Nor was Taiwan in an economic crisis that required major policy adjustments. Instead, Tsiang's then-novel idea that a realistic exchange rate and an open market in foreign exchange would promote exports and reduce distortions proved to be compelling to government officials—particularly in an environment where foreign exchange was scarce.

As a result, Taiwan became the first developing country after World War II to shift away from import substitution and focus on incentives for exports. Its economic success in doing so was widely noted at the time, and the country soon became a model for others.

The experience of Taiwan is not unique. Lasting policy reform does not happen deus ex machina; it is rarely initiated by pressure from domestic interest groups and cannot be imposed from the outside. Instead, policy advisers must provide convincing arguments to political leaders that a different set of policies can improve a country's economic performance—and, perhaps more importantly to the politicians, increase their popular support.[3]

The deeper question is knowing which ideas are best suited for the specific challenges that confront a particular economy and understanding how those ideas win acceptance by politicians in power.

1. That hasn't always been the case in the past. In the late 19th century, the steam ship and refrigeration were key improvements in international transportation, but tariff barriers around the world generally drifted up, limiting the globalization of the era. In the interwar period, radio communications and freight improvements were overwhelmed by protectionist policies—such as higher tariffs and foreign exchange controls—that turned this period into one of deglobalization.

2. One might argue that he underplays the reduction in trade barriers among developed countries, including the United States. By the early 1990s, the United States had dispensed with many "voluntary export restraints" that limited its imports of such goods as Japanese automobiles, had signed the North American Free Trade Agreement, and finalized the Uruguay Round of GATT negotiations, which abolished the Multi-Fiber Arrangement and other trade barriers.

3. Arnold Harberger calls the economists who successfully bring about policy reforms a "handful of heroes" for the contribution they make to people's well-being.