Import substitution is the idea that blocking imports of manufactured goods can help an economy by increasing the demand for domestically produced goods. The logic is simple: Why import foreign-made cars or clothing or chemicals when one could produce those goods at home and employ workers in doing so?

This idea goes back centuries in economic thought but is commonly associated with the Argentine economist Raúl Prebisch, who publicized his ideas in Latin America and around the world in the 1950s. Many developing countries adopted import substitution trade strategies after World War II, when economic development was equated with industrialization and capital investment. By the 1980s, however, the idea had fallen out of favor with the rise of the “Washington Consensus” that supported freer trade. 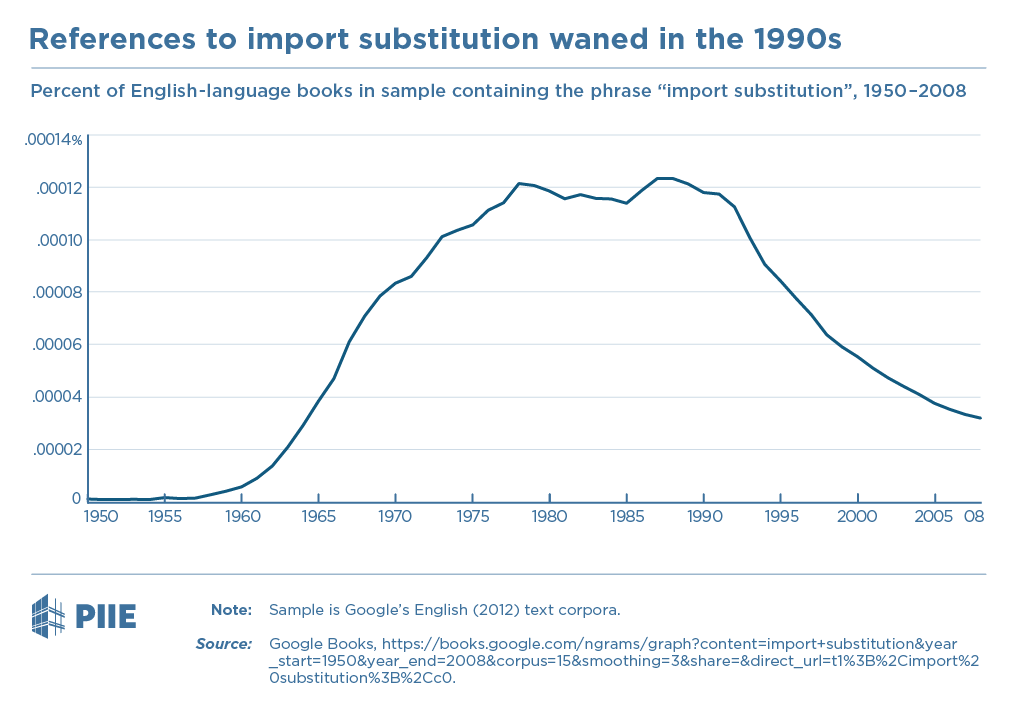 Yet today, import substitution may be coming back in vogue. Several African countries have recently indicated they may be embracing it once again.[2] Other countries such as China, India, and even the United States seek to promote domestic manufacturing and exclude imports from the market. For example, in the United States, the Trump administration has been taking steps to “reshore” production of automobiles, semiconductors, and other manufactured goods to boost American output and create manufacturing jobs.

In this context, it is somewhat surprising and instructive to learn that even the original proponents of import substitution were rather qualified in their advocacy of this policy and were among the first to recognize its potential flaws and dangers.

A newly released PIIE working paper, “The Rise and Fall of Import Substitution,” examines the views on import substitution of early intellectual leaders in development economics. This list includes Raúl Prebisch, Gunnar Myrdal, Ragnar Nurkse, and Albert Hirschman, all of whom were leaders in the field of trade and development and wrote extensively in the 1950s, 1960s, and 1970s.

While these economists are commonly thought to have issued blanket endorsements of import-substituting policies, the paper finds that some of them were quite critical of protectionist policies. It appears that even the early supporters of import substitution were aware of the potential downsides to such policies.

For example, Prebisch and Myrdal are most commonly recognized as the staunchest critics of “free trade” and advocates of import substitution. Yet Prebisch also worried that economic efficiency would be sacrificed if developing countries, with their very small domestic markets, tried to pursue a policy of self-sufficiency. And Myrdal issued a blistering attack on the quantitative controls on imports and feared their implementation would be rife with inefficiency and corruption.

For their part, although they accepted the need for countries to have a development strategy, Nurkse and Hirschman were openly critical of import substitution and thought that such policies could backfire.

By the 1960s, it was evident that import substitution policies, particularly in Latin America and South Asia, were leading to highly protected and inefficient domestic industries, in addition to stifling exports and reducing foreign exchange earnings. Furthermore, countries pursuing a policy of export promotion seemed to be doing better. As a result, support for import substitution—at least among thought leaders, if not policymakers—began to wane.

And yet, sometimes old ideas return in new guises and import substitution may yet rise again. The lessons of past experience might temper one’s enthusiasm for the resurrection of such anti-import policies.

2. The Economist reports: “Tito Mboweni, South Africa’s finance minister, wants to ‘set up manufacturing to make what we need and stop relying on imports from China.’ Uganda is trying to discourage imports. Ghana also says it is making import substitution a priority.”

The rise and fall of import substitution

Global value chains and the removal of trade protection

Trade Policy toward Supply Chains after the Great Recession