NAFTA and Trump: Precursors to a Mexican Populist Wave?

President-elect Donald Trump's crusade against the North American Free Trade Agreement, or NAFTA, is producing a backlash in Mexico, lifting prospects for the opposition in the 2018 presidential elections. Andrés Manuel López Obrador (or AMLO, as he's popularly known), a leftist firebrand who formed his own party, MORENA, in 2010, now appears to have a decent shot at the presidency next year. Rising nationalism and disenchantment with NAFTA may also be helping AMLO, although he has not openly come out against NAFTA. Nevertheless, in view of Trump's stance on trade agreements and rising discontent in Mexico, prospects for NAFTA being renegotiated are doubtful at best.

"2017 will be the year when people unite to peacefully beat the mafia in power and promote a rebirth," tweeted AMLO on January 2.

AMLO and his party were the biggest winners in the 2016 local elections, running on a platform of "change," echoing his bids for the presidency in 2006 and 2012. AMLO's tirades against the "mafia in power" (the Mexican-flavored "swamp"), and President Peña Nieto's reforms have gained increasing attention, especially as the current administration's popularity falters due to serious domestic problems, corruption, as well as Donald Trump's victory. In 2006, when AMLO narrowly lost his presidential bid to Felipe Calderón, the left-leaning populist amassed a large base of anti-NAFTA and anti-globalization supporters, although he was not then an avid defender of nationalism. As AMLO seizes on popular anger sparked by Trump's anti-Mexican campaign message, nationalist rhetoric has gained traction. Garnering support for the 2018 presidential elections may well have potentially profound implications for the future of NAFTA south of the border.

While the Mexican business community recognizes the many benefits brought about by NAFTA, popular sentiment outside major industrial centers echoes the misguided perception championed by the US president-elect: NAFTA has not delivered on its promises and may have shifted high-paying jobs across the border. Despite evidence that shows Mexico has benefitted significantly from NAFTA (see NAFTA 20 Years Later), these arguments find resonance in two major problems that continue to plague Latin America's second largest economy: 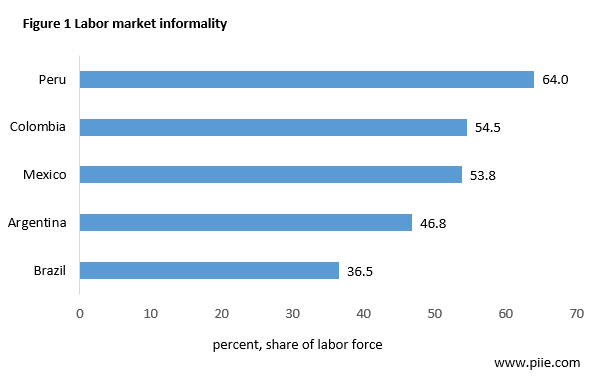 Labor market informality—the wide prevalence of low paying jobs with no safety nets—is pervasive even in the manufacturing industry, the sector that reaped the most benefits from NAFTA. Compared to Brazil, where manufacturing is largely isolated from the rest of the world and not a part of global supply chains, Mexico's level of informality is almost twice as high as that of Latin America's largest economy (figure 2). 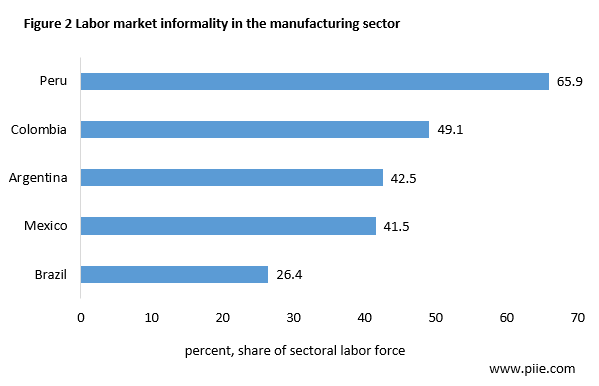 Although Mexico's two major challenges—lackluster growth and high labor market informality—are likely the result of incomplete domestic reform efforts and severe security problems among other factors, the underlying narrative in an environment where well-founded expert opinion is viewed with growing skepticism could easily degenerate into misguided populist messages. It is thus not inconceivable that a populist leader who promises to speak on behalf of the "silent majority," in this case the millions of Mexican workers in the informal sector, would name NAFTA as one of the culprits of Mexico's unresolved labor market problems, however distant from the facts that view might be.

AMLO's rise in 2018 is still far from certain, and many political pundits in Mexico view him as a maverick, unlikely to amass more than his presumed—albeit significant—base of some 30 percent of the total vote. However, the result of the US elections, Donald Trump's threat to clamp down on General Motors' Mexican operations, and the decision by Ford to cancel its plan to build a new plant south of the border may well play into AMLO's hands.

It is therefore possible, even likely, that in a not so distant future only Canada will remain as an unwavering defender of NAFTA.