A previous post identified the potential gains for the US service sector from participation in the Trans-Pacific Partnership (TPP), highlighting the efficiency of US services firms and the large comparative advantage in exporting transport, travel, financial, and business services. So what are the trends for US services trade in recent decades? This post provides a brief snapshot of the numbers.

In August of this year, the United States recorded [PDF] $60.6 billion of service exports, the highest monthly value on record. The top export categories are travel (spending of travelers in the United States, including foreign students), business services (excluding finance and insurance), and charges for the use of intellectual property (figure 1). These three categories of exports jointly accounted for nearly 62 percent of total US service exports. More broadly, in recent years, service exports have accounted for about 30 percent of total US exports of goods and services (compared to 24 percent on average in the 1980s).1 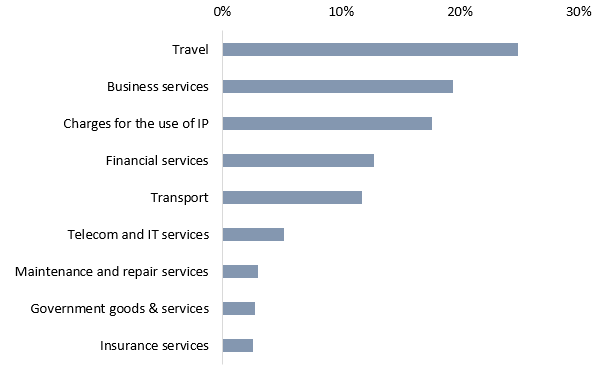 Service exports of this magnitude are a relatively recent phenomenon. Since 2000, the value of US service exports has risen by more than 160 percent (figure 2). 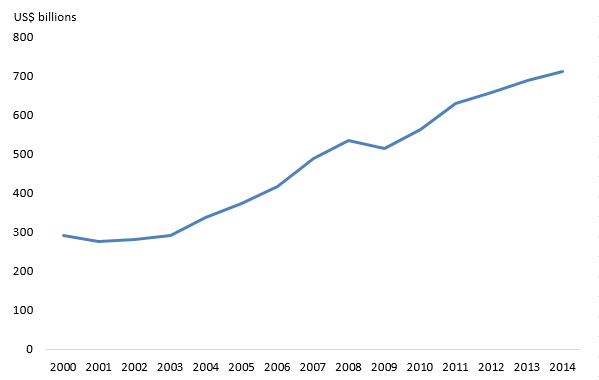 Over this same time period, service imports have also grown substantially but remain outpaced by exports. In first eight months of 2015, the United States had a positive services balance of $155.3 billion, suggesting that it could reach more than $230 billion by the end of the year. This is impressive growth even compared with recent years. The average annual services trade balance has risen from about $80 million in the preceding decade to slightly more than $200 billion since 2010 (figure 3). For reference, the US goods and services trade deficit was more than $500 billion in 2014, driven by a goods deficit of $740 billion. 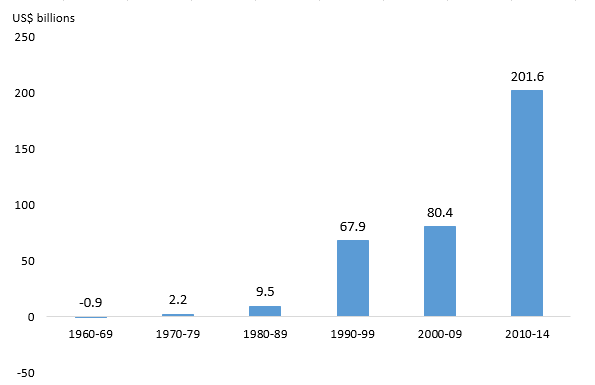 Given that the US service sector is bound to see substantial gains from the TPP over the medium to long-term—with new opportunities expected for financial and businesses services in particular—and that the number of foreign students in the United States is increasing (figure 4, a proxy for the performance of US travel exports), it is reasonable to expect service exports to continue to perform at near-record levels.

Figure 4 Number of international students in the United States 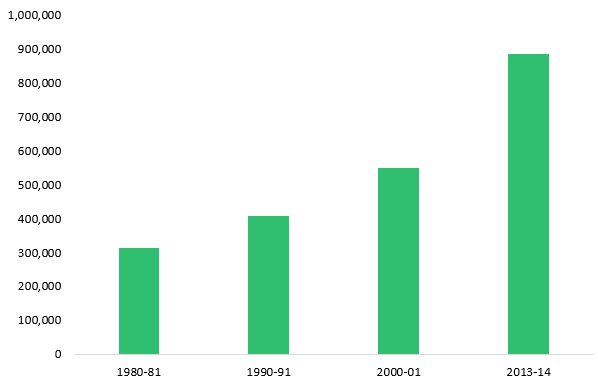 1. The challenges of measuring tradable services are widely known. While measurement has improved, the official data likely underestimate the real magnitude of services trade; see Jensen (2011) for detailed analysis.