The global recession resulting from the COVID-19 outbreak has already taken a toll on trade. How big the trade losses will be in the future is uncertain, but a decline is inevitable given the initial supply shock from China, followed by a demand shock from Europe and America, supply chain disruptions, and rising restrictions on trade of “essential” goods such as medical equipment and food. World Trade Organization (WTO) Director-General Roberto Azevêdo foresees an “ugly” year for global trade. Experience from the Great Recession of 2008–10 suggests the plunge in merchandise trade could be as large as 24 percent. Since all nations depend on trade, it is imperative that they cooperate to lower barriers, keep trade flowing, and foster a strong recovery once the public health crisis abates. 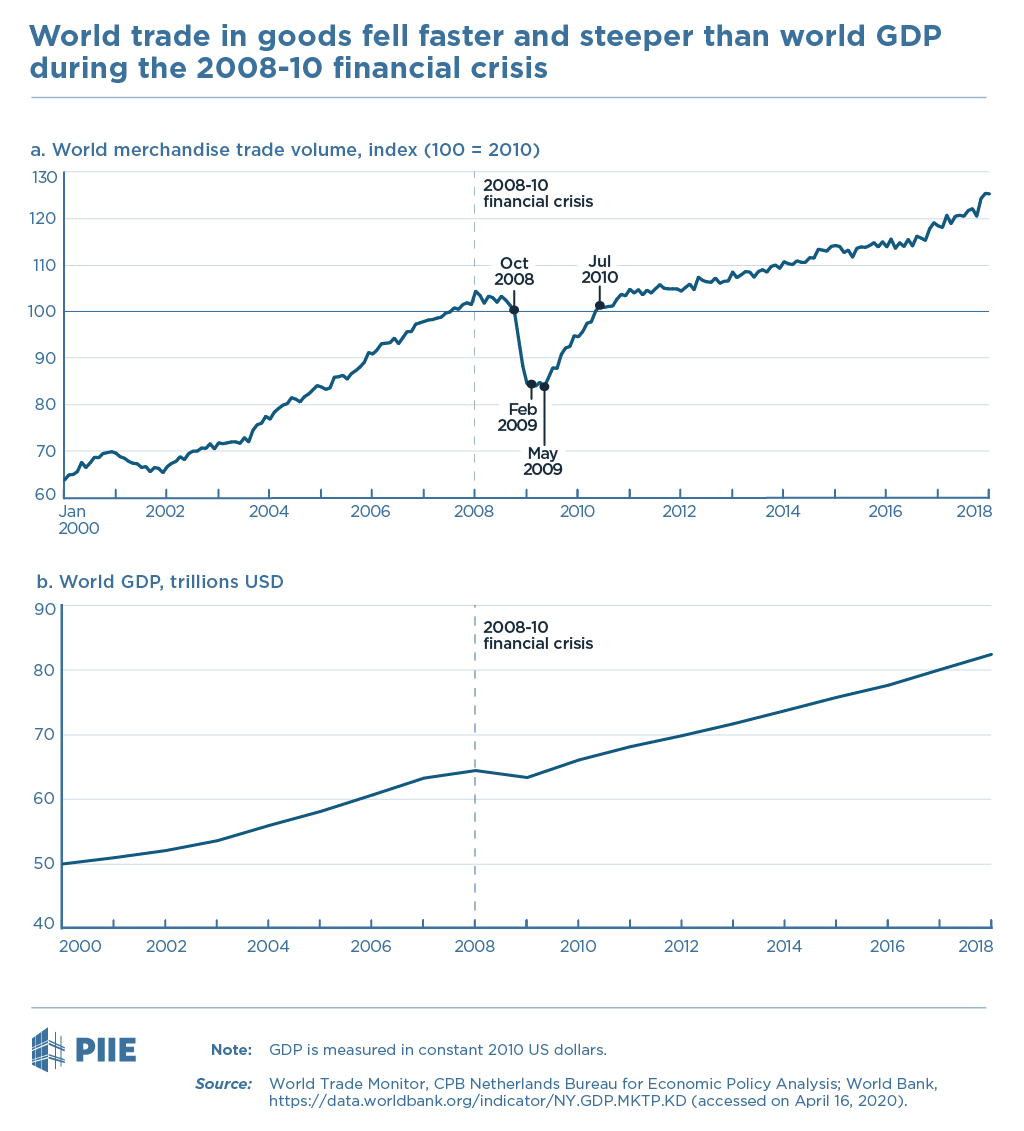 In 2020, as virus-containment measures interrupted economic activity, the global economy entered a recession that International Monetary Fund (IMF) Managing Director Kristalina Georgieva characterized “as bad as or worse than in 2009.” According to the IMF’s latest April 2020 World Economic Outlook, the US economy will contract by 5.9 percent in 2020, and China’s real GDP growth, consistent with J.P. Morgan’s forecast, will slide to 1.1 percent in 2020. The Organization for Economic Cooperation and Development (OECD) estimates that each month of strict containment measures will knock two percentage points off annual GDP growth in OECD economies. J.P. Morgan estimates US real GDP growth to be negative 10 percent in the first quarter of 2020 and negative 25 percent in the second quarter. James Bullard, president and CEO of the Federal Reserve Bank of St. Louis, offered an extreme pessimistic forecast: a 50 percent quarter-over-quarter contraction of real US GDP in the second quarter. The Economist Intelligence Unit expects all but three G20 countries (China, India, and Indonesia) to suffer a recession this year.

At the global scale, recent growth forecasts suggest a 3.4 percent contraction in 2020 on the pessimistic side and a 0.5 percent contraction on the optimistic side, down from pre–COVID-19 outbreak forecasts of growth in a range between 2.3 and 3.4 percent (see table). Applying the one-seventh ratio from the 2008­–10 Great Recession experience, global merchandise trade volume in 2020 could drop by as much as 24 percent, a plunge not seen in recent decades. This estimate, based on the Spring 2020 Global Economic Prospects growth forecast of –3.4 percent from the Peterson Institute for International Economics, falls within the range of the WTO’s “optimistic” and “pessimistic” forecasts: Global trade volume is expected to plummet by between 13 percent, if a sharp drop is followed by a recovery starting in the second half of 2020, and 32 percent under a scenario of prolonged and incomplete recovery. Contraction on this scale will devastate millions of people and businesses.

Looking back at the 2008–10 global financial crisis, the Global Trade Alert recorded a spike in protectionist measures in the first quarter of 2009. A steady flow of protectionist measures—both tariffs and nontariff barriers—characterized the next decade. More important, global trade liberalization sputtered, with the death of the Doha Round of multilateral trade negotiations. As a result, global merchandise trade grew at a much slower trend after that crisis (see figure). Amid fears of a COVID-19 recession, countries are once again erecting trade barriers. As “self-sufficiency” campaigns gain support and some economies shorten their supply chains, global productivity will suffer.

But hope can be found for plurilateral cooperation: New Zealand and Singapore committed in late March to remove restrictions on trade in essential goods and keep their supply chains open. Canada, Australia, Chile, Brunei, and Myanmar later joined their bilateral agreement. Singapore and New Zealand further issued a declaration in mid-April to remove tariffs, export controls, and nontariff barriers on a list of COVID-19-related products and facilitate trade in those products. The two nations made the declaration an “open plurilateral” initiative and encouraged other countries to join. More economies in the Asia-Pacific region should enlist in the campaign to keep trade flowing and deliver a rapid and strong recovery. Once the crisis passes, perhaps the United States and the European Union will emphasize global cooperation rather than national “self-dependence.”