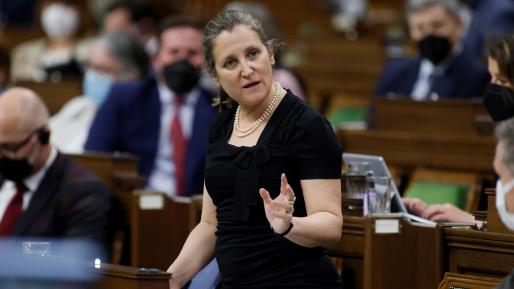 A thoughtful vision of the future of globalization

The idea of limiting economic relations largely to friendly and liberal democracies has been growing—and not just in the United States. Canadian deputy prime minister and minister of finance Chrystia Freeland presents an intellectually deep critique of the future of globalization in which she argues that countries should condition economic relations on political values, implicitly overturning the notion of uniform treatment across trade partners that has underpinned the GATT/WTO system for 75 years.

Freeland begins by observing that the fact that the Soviet Union kept itself economically isolated during the Cold War meant that Western liberal democracies never had to confront a situation in which economic engagement could strengthen an ideologically opposed political-military adversary. In the wake of the fall of the Berlin Wall and the collapse of the Soviet Union, Western statecraft was guided by two ideas: that the capacity for liberal democracy was universal and that as societies became richer, the middle class would expand and demand more accountability from political leaders, making the eventual triumph of liberal democracy inevitable. This conception of progress underlay the expansion of the European Union, the admission of Russia to the International Monetary Fund, the accession of China to the WTO, the cooperation between Germany and Russia to build Nord Stream 2, and the signing of free trade agreements with China by Australia and New Zealand.

The West thought that it could have its cake and eat it, too: bringing China into the WTO and lifting people out of poverty without accepting a trade-off in terms of its geostrategic position in the world. In retrospect, those views appear naive. Globally, democracy is in retreat. Russia’s invasion of Ukraine has created the greatest military crisis in Europe since 1945. Chinese economic coercion continues unabated.

The question, as Lenin once posed, is what is to be done?

Freeland begins with two ideas. First, “We need to assume that in the decades to come we [the democracies] will be sharing the planet with rich and powerful countries who do not share our values—who, in fact, often see our values as both hostile and inferior to theirs. Yet, we need to find ways to coexist.” Second, because the West believed that prosperity would lead to more pluralistic and humane political regimes and that economic interdependence would prevent war, it spent 30 years building interdependence. That belief was not groundless—witness the post–World War II development of Europe, South Korea, Taiwan, and Japan—but insufficient attention may have been paid to the necessary conditions for this optimistic scenario to obtain. “The economic ties we thought would constrain Russian bellicosity are instead being used to try to blunt our response to the Kremlin’s war crimes,” Freeland argues. “With hindsight, it is clear that appointing Gerhard Schroeder to the Rosneft board was as essential an element in Putin’s war planning as any military exercise.” Similarly, one could question whether China’s integration into the global economy has blunted conflict.

History has not ended. The issue is how to shape its future.

Freeland identifies three pillars, admitting that a lot of detail remains to be filled in. The first is enhanced political and economic cooperation among democracies. Economically, autarky would be ruinous, so the centerpiece is friendshoring. Canada has free trade agreements with all the other Group of Seven (G7) members. Freeland believes the other members should do so as well. Supply chain resiliency should be built through other democracies—a policy the Biden administration had adopted. Democracies should grant preferences in government procurement and incentive programs to other democracies—by, for example, multilateralizing provisions in the Inflation Reduction Act to US free trade partner countries. Friendshoring has been promoted by the Biden administration, most recently at the North American Leaders’ Summit.

Freeland’s conception of this democratic solidarity goes beyond trade agreements, citing the European Union’s willingness to honor European vaccine contracts with non-European allies during the COVID-19 pandemic and Canada’s commitment to fast-tracking energy and mining projects its allies need to heat their homes and manufacture electric vehicles. More broadly, she embraces the growing idea that democracies must support each other in the face of economic coercion, citing the examples of Chinese harassment of Lithuania over its policy toward Taiwan and its bullying of South Korea over its national security policy.

Implementation of this vision does not require significant change in the status quo international economic regime. Tactically, deeper integration among democracies can be pursued as it is today, through conventional trade negotiations such as the US-EU Trade and Technology Council or implicitly through preferential relaxation of trade restrictions such as those imposed by the Trump administration. Outbound investment restrictions could also be used to shape the pattern of cross-border integration across partners and reorient supply chains.

The second pillar addresses the treatment of the vast majority of countries that are neither friends nor adversaries. Freeland proposes keeping the door open for democracies anywhere in the world willing to accept a collectively agreed upon set of rules. Fair enough. But doing so would require change, possibly fundamental, to the status quo. What is the mechanism through which those rules are established? Who decides what is a democracy? Does an economically liberal illiberal democracy like Singapore count? Or is each incumbent democracy left to set its own rules and criteria? How should an economically and strategically relevant autocracy like Saudi Arabia be treated?

The third pillar is the treatment of autocracies. Freeland sees the relationship between the world’s liberal democracies and authoritarian regimes as fundamentally adversarial: “We need to understand that authoritarian regimes are fundamentally hostile to us. Our success is an existential threat to them. That is why they have tried to subvert our democracies from within and why we should expect them to continue to do so. We must likewise recognize that authoritarian regimes have as little respect for a rules-based order among states as they do for the rule of law within their own countries. That means we need to be cautious about our economic relations with the world’s dictators and their elites. . . . We should continue to trade, but we should avoid strategic vulnerabilities in our supply chains and our economies more broadly.”

The Biden administration’s export controls on the Chinese semiconductor industry could be regarded as Exhibit A in how to deal with autocracies. These controls will clearly come with efficiency costs, as Freeland concedes. But they need to be weighed against potential supply chain resilience and geopolitical gains. Simply dismissing national security concerns and focusing solely on efficiency losses is an intellectually inadequate and politically unpersuasive response. But the analytical tools for assessing these sorts of tradeoffs are meager to nonexistent.

Freeland recognizes that cooperation with authoritarian regimes is essential to addressing the existential threat of climate change and other global public goods. How effective that cooperation could be in an environment in which the industrial democracies explicitly discriminate against China, Russia, and other autocratic regimes is an open question. Freeland argues that “we may find that the world’s authoritarian regimes understand us better and respect us more when we are brutally frank about all of our profound disagreements,” citing Cold War arms control agreements with the Soviet Union as an example of cooperation in the context of systemic competition. I tend to agree with her assessment of the dynamics of frank disagreements; I am less certain that Xi’s China is Brezhnev’s Soviet Union, which concluded significant arms control treaties with the United States.

Freeland posits a world in which the fundamental organizing principle is democratic values and authoritarian states are regarded as adversaries, a world in which industrial policies and the treatment of foreign countries in national trade are to be calibrated on the basis of political kinship. This vision represents a break from the dominant postwar paradigm. Contemplating such a break with the past is discomfiting. It means abandoning the assumption of the past 33 years that the world’s leaders were moving together toward some beautiful future of peace and prosperity and replacing it with the understanding the world is in for an indefinite period of coexistence with major powers that do not mean us well and adopting economic policy that reflects that reality.

It may be that having identified a real challenge, Freeland’s proposal risks throwing the baby out with the bathwater: Russia and China (and possibly a few others) are sui generis, and the identification of friends/adversaries with democracy/authoritarianism is not perfect. Ironically, the disablement of the WTO’s Appellate Body—and with it the prospect of WTO-authorized trade retaliation—has brought us back to something resembling the GATT, creating the policy wiggle room for Russia- and China-specific policies without abandoning the foundational nondiscriminatory character of the existing international trade regime.
A second consideration auguring against a move to a Freeland-like system is the need to build and sustain alliances. The democratic world’s response to the Russian invasion of Ukraine has been heartening, but such solidarity may not be as forthcoming when the threat is more subtle. Its domestic political system appears to leave the United States incapable of delivering on trade liberation, putting it in the awkward position of wanting its partners to adopt particular policies or stances but offering little in return. (Examples include its refusal to reengage with the Comprehensive and Progressive Agreement for Trans-Pacific Partnership [CPTPP] and the relatively bare bones Indo-Pacific Economic Framework for Prosperity [IPEF] proffered as an alternative.) The US political system will have to create economic incentives if it wants to build a similar coalition with respect to China that it has in the case of Russia.

Of course, it is easy to pick apart what Freeland describes as just a sketch. Despite her proposal’s weaknesses, Freeland has done the world a service by identifying a conundrum and laying out a coherent vision of how globalization might proceed in the current political environment.