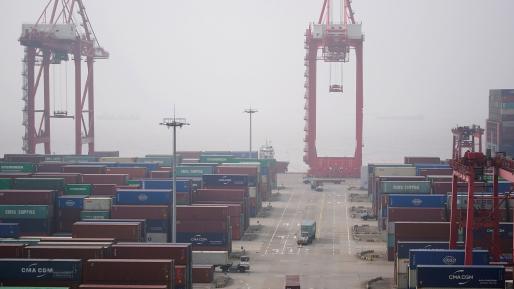 Do China’s trade relationships with friends and (potential) foes pacify its relations with trade partners? Standard interpretations of the commercial peace argument would suggest the answer is “yes.” As applied to China, however, the answer is not so straightforward. In recent decades, trade dependence may have made China more, not less, likely to initiate militarized disputes with trading partners.

Trade tends to pacify relations between states, raising the opportunity costs associated with conflict and creating vested domestic interests in both countries that prefer peace to war. One of the main rationales for welcoming China into the World Trade Organization (WTO) was its anticipated effects for global peace. In 2002, then US Trade Representative Robert Zoellick remarked, “It is not only America’s interest in international peace and stability, but China’s future economic and social health that will be strongly affected by China’s continuing evolution toward openness and acceptance of international norms.” But all social scientists are aware of the ecological inference problem: Just because something is true of a group—in this case, sovereign states in the post-World War II era—does not mean it is true of each of its members.

I take Frederick Chen’s recent article in the Journal of Politics—the most recent article in a top political science journal to address the subject—as a starting point. Chen argues the standard dyadic trade dependence argument—that as the volume of trade between states A and B increases, state A will be less likely to initiate conflict with state B for fear of foregone benefits of trade with state B—is incomplete because it does not account for the potential responses of third-party states allied with state B. Attacking Estonia might come with limited costs in terms of foregone trade for most countries, but an attack on Estonia is an attack on the North Atlantic Treaty Organization (NATO)—and the specter of disrupting trade relations with economies accounting for nearly half of global GDP might give pause.

Chen’s argument finds support in a series of statistical tests: As the total volume of state A’s trade with state B’s alliance partners increases, state A is less likely to initiate a dispute. We are witnessing a variant of this argument in real time: The direct economic costs of invading Ukraine for Russia in terms of foregone trade have paled in comparison to the costs of foregone trade and investment with the coalition of states that have allied themselves with Ukraine and imposed economic sanctions on Russia.

I reanalyze Chen’s evidence focusing on China. Because Chen’s analysis is directed-dyadic in nature—France-Germany in 2000 and Germany-France in 2000 are separate observations—we can assess the effects of China’s trade relations for its bellicosity toward other states over 60 years and thousands of observations of data. The outcome of interest is the initiation of a militarized interstate dispute (MID): “cases of conflict in which the threat, display or use of military force short of war by one member state is explicitly directed towards the government, official representatives, official forces, property, or territory of another state.” The MID data are by far the most widely analyzed data for studying interstate conflict.

The results of the reanalysis depart somewhat from conventional wisdom (see table): When it comes to China, neither Dyadic Dependence nor Extended Dependence pacify. Rather, as trade volumes with a partner increase, China becomes more likely to initiate a militarized dispute with that trading partner (p = 0.09, model 2), though the effect is only weakly statistically significant. This relationship is even stronger in the data for the post-1990 period, the period during which China emerged as a pillar of the global trading system, in terms of both substantive and statistical significance (p < 0.001): A one standard deviation increase in dyadic dependence from the mean value for China is associated with a 50 percent increase in the probability China will initiate a dispute.

However, there is also evidence that Chen’s conjecture holds: Dyadic dependence may not constrain China, but extended dependence does generate some restraint. According to model 3, a one standard deviation increase in Extended Dependence from the mean value for China is associated with a 30 percent decrease in the probability China will initiate a dispute. For many of China’s major trading partners (Japan, Taiwan, Russia, the United States), however, the effect of Dyadic Dependence clearly dominates the effect of Extended Dependence.

In the 21st century, China has initiated disputes against several of its largest trading partners, including Japan (2012, when Chinese military aircraft entered Japanese airspace after months of naval incursions into Japanese-claimed waters), Taiwan (too many to list), and the United States (2001, the Hainan Island Incident). This is in addition to many maritime disputes arising from fishing and other activities in the disputed waters of the East and South China Seas. Though some caution is warranted in analyzing data involving initiated disputes—many situations are murky, and often the only witnesses are partisans to the conflict—a distinct pattern emerges: China is more likely to initiate disputes with trading partners, and the volume of trade seems to only enhance this effect.

A couple caveats are in order. First, most MIDs (80 percent) are not fatal. The modal MID is a minor provocation, though the examples above demonstrate that even seemingly minor incidents can sometimes have significant diplomatic and economic reverberations. Second, these findings do not provide insight into the domestic capitalist peace, or the tendency of trade integration to reduce the likelihood of civil strife and state failure—though associations between trade openness and state failure may be driven by outliers.