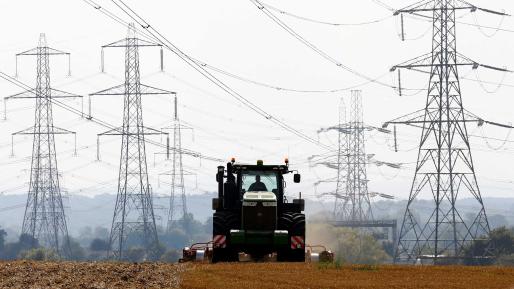 With inflation sustained at high levels in some countries and having increased sharply in others, the outlook for the global economy is  dimmer than it was last spring, according to the analysis presented at the PIIE semiannual Global Economic Prospects for Fall 2022. Global economic growth is projected to step down, with the brisk gain of 5.8 percent in 2021 to be followed by increases of 2.9 percent in 2022 and 1.8 percent in 2023. Tighter monetary policy is the primary driver of the projected global slowdown, but direct effects of the energy-price shock from the war in Ukraine and weaker prospects for China are contributing factors.

Recessions loom in some of the large advanced economies. As seen in figure 1, US GDP in 2022 will be 1.7 percent above its 2021 level, and, in 2023, is projected to be 0.5 percent below its 2022 level. The euro area economy is also likely to  contract in 2023, with Germany and Italy hit especially hard by the restricted supply of natural gas from Russia. An energy crisis, high inflation, and other factors are weighing on the UK economy, and recent data suggest a recession may already be under way. Although moderate inflation in Japan means monetary tightening is unneeded, the Japanese economy is likely to be held back next year by slower growth in the rest of the world. 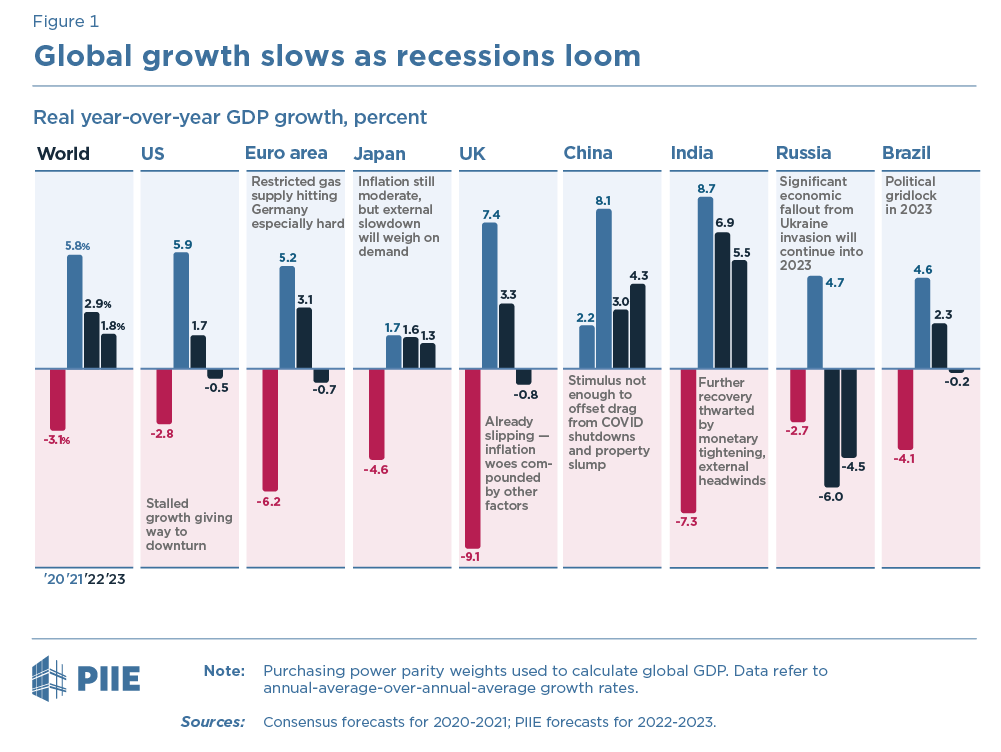 Most large emerging-market economies are also projected to underperform in 2023. In China, stimulus measures have not been strong enough to offset considerable drag from COVID-19 shutdowns and a downturn in the property sector. As a result, economic growth there is likely to continue to run well below the government’s target pace. In India, the economy has  further to go to recover from its pandemic weakness, but progress in the year ahead is likely to be thwarted by monetary tightening and external headwinds. Russia continues to suffer significant economic repercussions from its invasion of Ukraine and the sanctions imposed in response. Brazil’s economic performance next year is likely to be hampered by political gridlock.

The key issue in the United States is that almost a year of slow economic growth has generated no appreciable decline in inflation (see figure 2). The Federal Reserve has raised its policy rate and used strong language to reinforce its commitment to reducing inflation, and financial conditions have tightened in response. Housing demand is dropping, and consumer spending has slackened a bit. But US labor markets remain tight, and wage growth continues to run well above its pre-pandemic pace. Moreover, there appears to be limited scope for labor market slack to be increased by an expansion of labor supply. Given current labor market pressures and what appears to be considerable inertia in inflation, the Fed will probably need to raise the policy rate more than it has officially recognized to tame inflation.

A soft landing for the US economy is possible but is not the most likely outcome. The US unemployment rate is projected to rise from 3.7 percent in August 2022 to 5.5 percent next year. Under these circumstances, core US personal consumption expenditures (PCE) inflation is likely to moderate from a pace of 4.6 percent over the four quarters of 2022 to 3.6 percent over the four quarters of 2023 before falling further in 2024.

The projected US recession would still be mild by historical standards, with the unemployment rate having peaked at 6 percent or higher in previous post-World War II US recessions. To be sure, financial conditions are likely to tighten further and volatility in financial markets will probably continue to be pronounced as market participants come to terms with a scale of increase in interest rates unseen in many years. But disinflation should be facilitated by supply shocks abating and a limited rise in long-term inflation expectations. Moreover, as-yet solid household and business finances are likely to act as shock absorbers. Household wealth across the income distribution is still above its pre-pandemic levels, and corporate profits remain at the high end of their historical range.