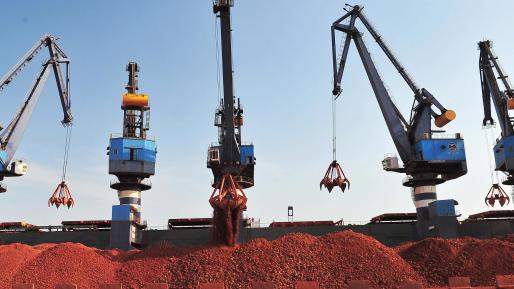 Worldwide demand for bauxite, the primary source of aluminum oxide ore, is surging to meet the needs of the construction, energy, and vehicle sectors as they strive to cut carbon emissions. Bauxite production is forecast to grow by 80 percent by 2050. But countries where bauxite is mined face challenges in securing financing commitments and developing supporting infrastructure as global energy systems ramp up demand for their natural resources.

A case in point involves Guinea’s military government and its attempts to spur development of downstream capacity and move up the value chain in its bauxite industry, demanding multinational firms operating there to facilitate the process. Guinea’s challenges are potentially solvable through investments in hydropower expansion and governance reforms, but both will be difficult to make in its unstable political environment.

Guinea is a small country with a population of only 13.5 million in possession of massive (and high-quality) bauxite reserves: 7.4 billion metric tons, or 23 percent of the world total. And that estimate is likely conservative. Its export potential is vast. The other leading bauxite producers (Australia, China, India, and Indonesia) are industrialized or industrializing economies that refine and consume large shares of their mined ore. In 2020, Guinea accounted for 55 percent of global aluminum ore exports, primarily to China.

In May, Guinea’s military government led by Mamady Doumbouya announced plans to hand  power back to elected leaders in three years even while attempting to renegotiate Guinea’s relationships with foreign mining firms since coming to power via a coup in 2021. Last March, the government ordered Rio Tinto subsidiary and partners to halt development of the Simandou iron ore deposit. After difficult negotiations, Rio Tinto, the Guinean government, and a consortium of Singaporean and Chinese firms agreed to restart development after the foreign firms assented to finance and codevelop rail lines and port infrastructure. Conceptually, the deal follows the resource-for-infrastructure (R4I) blueprint structure of many Chinese state-owned enterprise deals with African governments.

The Guinean government is now pressing multinational mining companies to develop more in-country downstream processing capacity to refine bauxite into aluminum oxide, which trades for six to seven times the price of bauxite itself. At present, Guinea’s only aluminum oxide refinery is capable of refining less than 3 percent of its annual bauxite production. Accordingly, in April, the Guinean government forced the issue, requiring foreign mining firms operating in Guinea to develop concrete plans for expanding local refining capacity.

But expanding refining capacity in Guinea—a highly energy-intensive process—will be challenging, in part because Guinea’s power grid is inadequate. Despite Guinea’s substantial hydropower potential—at the headwaters of the Gambia, Niger, and Senegal Rivers—the mining sector still depends on diesel and heavy fuel oil-powered generators and is looking to natural gas-fed power development to meet anticipated demand.

In August, West Africa LNG Group Guinea SA announced bridge funding for developing a liquefied natural gas (LNG) terminal to supply gas to mining projects in the mining-intensive Boké, Bel-Air, and Boffa regions. The proposed terminal has been supported by the US Trade and Development Agency, which commissioned the feasibility study that helped secure funding. LNG may be preferable to diesel and heavy fuel oil from an efficiency and emissions perspective, but no more (and perhaps less) reliable because of tight and unstable world energy markets.

More broadly, Guinea has significant governance challenges that deepen political risk for bauxite mining companies interested in investing in downstream capacity, as opposed to mining bauxite itself. Mining companies have little latitude in siting mines: They must be where the ore is. But downstream capacity investments take into account energy supply, tolerance of environmental impacts, shipping costs, and policy and political stability. Guinea’s advantages would be in reducing shipping costs by shifting costs to higher value-added links in the supply chain (export of refined aluminum oxide) and willingness to bear environmental impacts. But the political and policy environment is unstable in the wake of the 2021 coup and lack of firm plans for elections. Even before the coup, Guinea was ranked 156th out of 190 economies on the Ease of Doing Business Index and 122nd of 141 on the Global Competitiveness Index, making multinationals all the more wary of committing to long-term investments. Guinea is also under sanctions imposed by the Economic Community of West African States (ECOWAS) in response to the military’s seizure of power.

Guinea’s energy barriers to downstream development are solvable because of its hydropower potential. LNG may solve short-term problems at the cost of higher price volatility, potential supply disruptions, and locking in carbon emissions over the longer term. But in tapping its vast hydropower potential, the government  should heed the recommendations of a recent Human Rights Watch report and ensure that displaced communities are compensated for their losses and provided with adequate resources for relocation and redevelopment, including compensation for customary land rights. Independent auditing of the relocation and resettlement process could also help ensure fairness and forestall popular discontent.

On the wider governance side, Guinea has taken positive steps. It joined Extractive Industries Transparency Initiative (EITI) in 2007, which both heightens international scrutiny of its mineral sector (which includes bauxite, but also diamonds and gold) and provides an external policy anchor for institutional reforms. But the EITI has criticized the 2021 coup for potentially undermining “progress in democratic and accountable governance.” Guinea has also avoided the pitfall of courting a narrow foreign investment base: Guinea’s bauxite mines are owned by the Guinean government in joint ventures with major Western (Alcoa, Rio Tinto) and Chinese and Russian firms.

Reforms to root out systemic government corruption and a return to democracy may allow the country to return to its pre-coup trajectory of modest improvements in its regulatory environment. But progress in these areas is far from guaranteed.