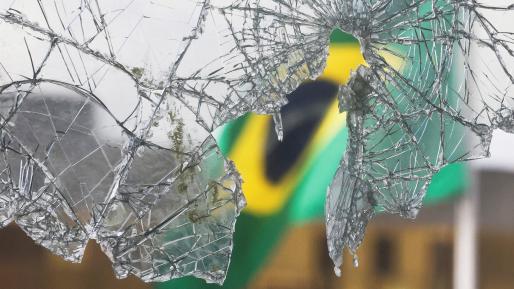 The insurrection supporting far-right former president Jair Bolsonaro in Brazil was put down within a day on January 9, and more than a thousand protesters have been detained. But the dangers of more instability confronting President Luiz Inácio Lula da Silva remain high, especially because the antipathy toward Lula is widespread within elite economic circles and, perhaps more worrisome, among Brazil’s military and security forces.

The uprising should have come as no surprise. It is well known that the mobs camped out in Brasília months before the attacks and was financed by extreme-right organizations, as well as companies and other private sector participants. Brazil’s armed forces and the police are permeated with Bolsonaro supporters.

Despite winning the election convincingly last year, President Lula faces limits in his government’s capacity to lower the risk of further instability fueled by extremists. The financial sector as well as rightist security officials hate his social and economic programs. Given the forces arrayed against him, Lula must accordingly be able to count on the international community to condemn the actors and organizations behind these heinous crimes against democracy and impose international sanctions targeting individuals and corporations to deter future disruptions.

During the campaign and the transition period after his electoral victory, Lula has been working on restructuring social programs to address extreme poverty and hunger. Bolsonaro had largely dismantled these programs despite the rise in poverty over the past four years. The mobs that stormed Brasília on January 8, and Bolsonaro supporters more broadly, do not have clear views on the economy, but they do oppose spending on social programs as "socialist" or even communist. They also oppose promised minimum wage hikes. This said, their agenda relies more heavily on identity, social, and cultural issues promoted by Bolsonaro rather than on economic policies.

The destruction of public property seen on January 8—in which supporters invaded and vandalized the public buildings that house the three branches of the republic, from the Supreme Court to Congress to the Presidential Palace—has no historical precedent. To be sure, the military coup in March 1964, which installed a dictatorship that lasted 21 years, was a brutal suppression of democracy, ultimately torturing, killing, and sending into exile thousands of Brazilians. It was not accompanied by acts of vandalism and destruction of public buildings, however.

Indeed it has been half a century since South America experienced attempts at a coup d’état. Although the region is no stranger to authoritarianism and human rights violations, these tendencies have been kept in check in recent decades. The rise of extremist right-wing movements in Brazil and their increasing ability to organize and infiltrate institutions paved the way for the election of Bolsonaro in 2018, who governed by railing against environmental regulations, free press, democratic rights, gay rights, programs aimed at helping the poor, and, most importantly, against the Supreme Court and Congress. Bolsonaro’s rallies during his four years in office often incited his supporters to condemn Brazil’s democratic institutions.

The Brazilian insurrection is no January 6. It’s worse.

The January 8 attack in Brazil has naturally brought comparisons with the insurrection at the US Capitol on January 6, 2021. Bolsonaro, who has been living in Orlando, Florida, since Lula’s inauguration, fervently admires former president Donald Trump. The differences marking the two events are greater than their similarities. For one thing, the protests were aimed at all branches of government, reflecting Bolsonaro’s crackdown on Brazilian democracy. His attacks on these institutions have sparked repeated calls for their shutdown via “military intervention,” a widely used extremist phrase. Corruption has long dominated Brazilian politics, feeding the widespread perception, especially in extremist segments of Brazilian society, that these institutions are irremediably corrupt.

Brazil’s democratic institutions had been far from stable well before the latest episode. After serving two terms in office, Lula was later convicted on charges of money laundering and corruption and sentenced to prison. He spent nearly two years there before the trial was ruled as biased and the convictions were nullified, enabling him to run again last year and defeating Bolsonaro in an extremely polarized contest.

This week, the three branches of government, as well as the country’s governors, came together to oppose the protests in a display of unity and institutional strength. But images have surfaced showing how security forces in Brasília not only helped the mob to access the public buildings it destroyed but also took pictures and made videos with many of the perpetrators. The governor of Brasília has been temporarily removed from office, and his security chief was fired for not having responded to the threats that led to the events of January 8. The governor had refused Lula’s requests to remove the large camp of Bolsonaro supporters surrounding army headquarters in Brasília—right before January 8, the camp had 5,000 individuals, down from about 40,000 a month earlier. Questions remain over the loyalty of the armed forces to maintain institutional stability and as to the number of extremists they harbor in their ranks.

Many have been quick to say that the authorities’ response in squelching the attacks and showing unity has dealt a significant blow to far-right extremists. Such views are overly optimistic. The extremists already view themselves as “successful”: There was no coup, but they did symbolically succeed in damaging the branches of government they deem corrupt.

Bolsonaro tweeted a half-hearted condemnation from Florida of the January 8 attacks and continues to be hailed by his supporters. His vice president, Hamilton Mourão, a former army general recently elected as senator, has blamed the Lula government for a lackluster response to the attacks and for “mistreating” the 1,200 individuals apprehended so far.

International support for Lula is essential. Such support could come in the form of sanctions on individuals and corporations found to have been involved in organizing and financing the January 8 attacks. Without international support for Brazil’s current government, instability is likely to continue, inflicting severe damage on the country’s economic prospects and capacity to implement policies to reduce poverty and inequality. A weak government unable to carry out its agenda will possibly pave the way for the return of the extreme right in 2026.

Lula is back, but can he fix Brazil’s new problems?