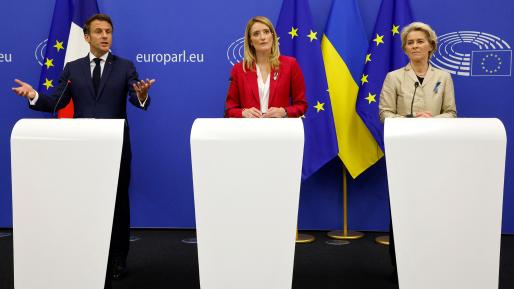 The effort by Europe, the United States, and other Group of Seven (G7) members and democracies to sanction Russia and provide military and financial support to Ukraine has been driven by a mixture of idealism and self-interest. But the tragic war in Ukraine also offers the chance for the European Union itself to expand its membership while accelerating fiscal integration and internal governance, overcoming its longstanding economic and institutional reform sclerosis.

The war has already done what would have seemed impossible only recently. It has forged a link between the fiscal hawks in Northern and Eastern Europe and more ambitious leaders like Emmanuel Macron, newly reelected president of France, who seek a more integrated and fiscally responsive EU with fewer veto opportunities.

The EU response to the COVID-19 pandemic was the previous watershed moment, prompting the creation of the EU Recovery and Resilience Facility (RRF) authorizing hundreds of billions of euros in common debt to help restore economic growth and confidence in Europe. Chancellor Angela Merkel of Germany declared the RRF a "unique one-off response." The largest interstate war in Europe since 1945 will prove that characterization premature.

Many so-called frugal Northern and Eastern European EU members traditionally oppose larger EU budgets and additional fiscal integration. But many of the same countries now back military and economic support for Ukraine and its eventual full membership of the EU. Reconstructing Ukraine will cost hundreds of billions of euros over at least a decade—once hostilities end. The European Commission stated in its recent proposal for a new Rebuild Ukraine Facility (RUF) that "these unforeseen needs created by war in Europe are well beyond the means available in the current multiannual financial framework [EU budget]. Therefore, new financing sources will have to be identified." EU members could increase their own national contributions to the RUF (i.e., de facto expand the existing EU budget to cofinance the RUF) or make cuts to the existing 7-year budget agreed in 2020. But as the Commission notes, "given the scale of the loans that are likely to be required, options include raising the funds for the loans on behalf of the EU or with Member States' national guarantees." The EU is going to have to issue more common debt to be able to successfully finance Ukraine's giant costs of reconstruction. Other alternatives, such as selling more CO2 emission credits, are certain to be opposed by environmentalists. Tapping frozen Russian government foreign exchange assets faces daunting legal obstacles.

This situation presents the EU fiscal hawks with a political dilemma: assist Ukraine or stick to their traditional fiscal conservatism. Eastern Europe, the most fiscally conservative bloc of countries, is also the most supportive of helping Ukraine integrate into the EU. These countries no doubt realize that a time could come again where an economically strong and well-armed Ukraine would be indispensable for Eastern Europe's own security.

The case of Germany

The EU's most fiscally hawkish large member was slow and erratic in responding to Russia's aggression in Ukraine, a legacy of the governing Social Democratic Party (SPD) of Chancellor Olaf Scholz and German businesses favoring economic cooperation with and energy imports from Russia. The SPD suffered two serious state-level electoral defeats recently in Schleswig-Holstein and Germany's most populous state, North Rhine-Westphalia, raising questions about the political support for Scholz's wavering over his embrace of sanctions against Russia and direct military aid to Ukraine.

Traditional fiscal conservatives in Germany are likely to argue that Ukraine's reconstruction costs can be met by EU member states' bilateral contributions, rather than the EU itself. But many EU member states are too financially stressed to follow that route. The financial lessons of the power of joint borrowing in the EU in times of crises—the European Stability Mechanism (ESM) in 2010 and the RRF in 2020—are malevolently forgotten.

The hawks fear the precedent setting effect common EU debt issuance for Ukraine would have for the long-term fiscal integration of the EU. Such common EU debt issuance less than two years after the RRF was agreed would underscore that the pandemic fund was "not a unique event." Instead an RUF financed wholly or partially by new common EU debt would usher in a new stage of EU fiscal integration in which such common financing would be available provided the "crisis is dire enough" and EU political circumstances are right. But fears of a deep fiscal union within the EU, with automatic stabilizers in future crises, are overblown.

Only a full EU political union could deliver fiscal integration of this scale. Still, it would not give the EU the automatic discretionary countercyclical spending capacity known in the United States. US automatic fiscal stabilizers are shallow, but Congress invariably appropriates more federal funding for unemployment benefits and other transfers to US states once an economic downturn hits. Common EU financing for Ukraine's reconstruction, however, would mean the EU is adopting an "event-driven" common fiscal capacity approximating US fiscal tradition, even if the political threshold for its use would be much higher and its scale more limited. Over time, the political parameters for when such common EU financing in a "bad enough crisis" can be unlocked would become more clearly defined, and almost certainly the threshold for action would be lowered through "repeated use." Yet, given the EU's current level of political integration, such "event-driven" common EU fiscal capacity would be the maximum fiscal integration the EU could achieve. Economists' preferred countercyclical automatic fiscal stabilizers are impossible at the EU level without direct democratic mandates. Explicit ex ante member state consent must always be required for common EU financing to be made available.[1]

If the EU adopted an "event-driven" common fiscal capacity, countries with the highest debt levels would acquire the biggest financial market benefits in the form of lower interest rates (e.g., lower spreads to German bonds) from investors factoring in a permanently higher probability of common EU funding in severe future crises. Accordingly high-debt EU and euro area members in Southern Europe would harm their own self-interest if they blocked a large commonly funded RUF, or the long-term future full EU membership for Ukraine. Kyiv represents the best and possibly only chance for them to see additional EU fiscal integration help push down their own national government bond yields.

The case of France

Speaking to the European Parliament, President Macron called for revisions of the EU Treaty and for EU institutions to embrace "full employment, growth, carbon neutrality and social justice as our institutions' core objectives." The latter implies fiscal expansion and is therefore directly linked to a commonly funded RUF. Yet 13 EU member states (Bulgaria, Croatia, Czechia, Denmark, Estonia, Finland, Latvia, Lithuania, Malta, Poland, Romania, Slovenia, and Sweden) opposed what they termed "unconsidered and premature attempts to launch a process towards Treaty change." Many of the 13 are also among the EU's strongest supporters of Ukraine's eventual full EU membership, however. France has already de facto blocked EU expansion to include the Western Balkans applicant countries (Albania, North Macedonia, Bosnia, Montenegro, Kosovo, and Serbia) at least until the EU Treaty is revised. Macron has a political choice. He must accept the EU candidacy of Ukraine or fail to get support from all members for EU Treaty revisions.

Macron's principal demands include the ability to adjust Treaty language without a lengthy political process or national referenda. Such simplified revisions under Article 48 of the Treaty on European Union concern things like introducing more qualified majority voting among member states (i.e., removing individual members' veto right) in more policy areas but do not envision transferring additional political sovereignty to EU institutions. Macron is not asking for a lot of additional EU integration (deepening) before he can accept more new members (widening). Instead he favors modest Treaty revisions for expansion with Ukraine. Macron's gambit seems politically generous, except that a lot of "EU deepening" has already taken place in recent years in accordance with long-standing French wishes—for example, for common debt for pandemic relief and EU purchases and delivery of weapons to Ukraine.

Macron also reintroduced the older French idea dating back to at least President François Mitterrand of a "European political community" in which EU neighbors could enter into different institutional collaborations with the EU short of full-scale membership. His vision would integrate the different current sets of ad hoc relationships the EU has with its neighbors—ranging from a (fragile) free trade agreement with the UK, a customs union with Turkey, to full economic integration without political participation for Norway and others in the European Economic Area.

An immediate concern among some EU members is that Macron is ultimately aiming to deny Ukraine full EU membership and instead have it become part of the European political community of EU neighbors. Such fears appear unwarranted, as key members of Macron's newly appointed government have publicly endorsed Ukraine's eventual full EU membership. No progress can be achieved on revising the EU Treaty without full membership for Ukraine.

On the other hand, Ukraine's EU membership is years away, even if Kyiv is granted official candidacy status in June. It took Croatia—the last member to enter the EU following a devastating war—18 years after the end of the Bosnian civil war in 1995 to gain EU accession in 2013.

For now, large-scale EU financial support for Ukraine's reconstruction is best facilitated by, as the European Commission says, "a clear link to the broad reform agenda vital for the success of the reconstruction process, and the alignment with the EU acquis." EU funding can flow much easier (i.e., with more direct EU control) when the EU simultaneously is rewriting many (if not most) of the Ukrainian rules and regulations to replicate the EU legal framework. Ukraine's reconstruction and eventual full EU membership will benefit from taking place at the same time as they will mutually reinforce each other.

In the final analysis, Ukraine's terrible current tragedy and the EU's political imperative to address the war on its own border represent a political opportunity for the EU to overcome its disagreements over fiscal integration, expansion, and Treaty revision. EU leaders should seize the opportunity in coming weeks. They may not get another.

1. See Kirkegaard and Posen (2018) for a detailed discussion of the lessons for the EU from historical US fiscal integration.