Why US Energy Independence Won't Mean Greater US Energy Autonomy

The United States has become the world’s largest producer of petroleum and natural gas and for now, at least, a net energy exporter. But the September 2019 drone attacks on Saudi Aramco’s Abqaiq and Khurais facilities, and resulting volatility in oil markets, demonstrate why the long-sought goal of “energy independence” is no panacea—and that Americans are as vulnerable as ever to instability in the oil-producing Middle East region and beyond.

The shale revolution and slow domestic demand growth for oil mean that domestically produced fossil fuels are increasingly meeting US energy needs. As figure 1 shows, the United States is already producing more natural gas than it consumes, and domestic production as a share of consumption has risen from a third to almost three-quarters in the past decade. This development has been a major boon—at least in the short run—to the economies of shale-rich states and regions. 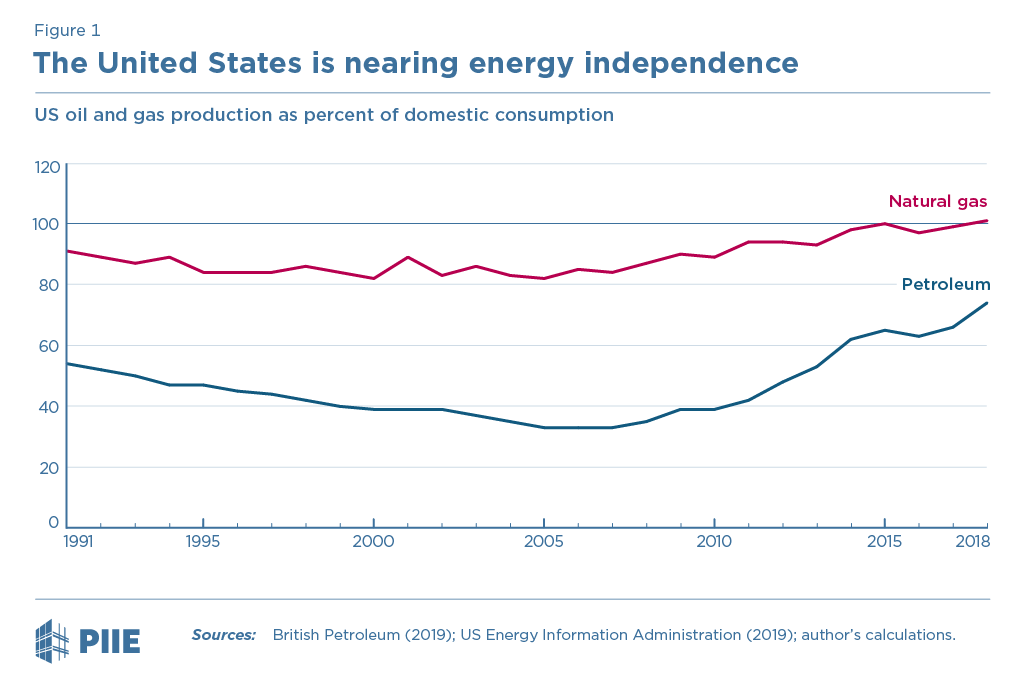 But the drone attacks on Saudi oil infrastructure took offline nearly 5.7 million barrels per day of output, underscoring the persistence of US security interests and commitments in oil-producing regions, which also supply vital energy to rising Asian economies, particularly China and India.

In addition, US energy reliance on domestic sources will not come without costs, as this reliance will also make it more difficult for the United States to address climate change and prevent what is known as the “resource curse,” which has corroded good governance in mineral-rich countries around the world. Many state and local governments have experienced booms resulting from fossil fuel extraction, but they also experience busts and attendant social ills, a pattern most obvious in coal-dependent Appalachia but evident also in Texas, New Mexico, Oklahoma, Wyoming, and Colorado. Overreliance on such resources can thus be a risky proposition long-term.

Advocates of energy independence have long argued that such independence will reduce the damage to American consumers from price shocks. Conventional wisdom also holds that the United States’ past net-import position has rendered its consumers vulnerable to price movements in international markets resulting from disaster-related production shocks like Hurricane Katrina or oil embargoes imposed by exporting countries. But US energy independence, and even substantial net energy exports, would not shield US consumers and producers from the vagaries of and prices in global markets.

It is true that many energy-independent economies (i.e., net exporters), ranging from Indonesia to Saudi Arabia and precrisis Venezuela, insulate their own consumers from price movements in global markets. Figure 2 plots real gas prices per gallon (in 2015 US dollars), as well as a benchmark global price, for several energy-independent exporter countries as well as the United States and Canada. Between 2003 and 2015, 22 “persistent subsidizers” were able to keep consumer prices largely stable—and below world market prices—against a backdrop of price volatility and spikes (Ross, Hazlett, and Mahdavi 2017). 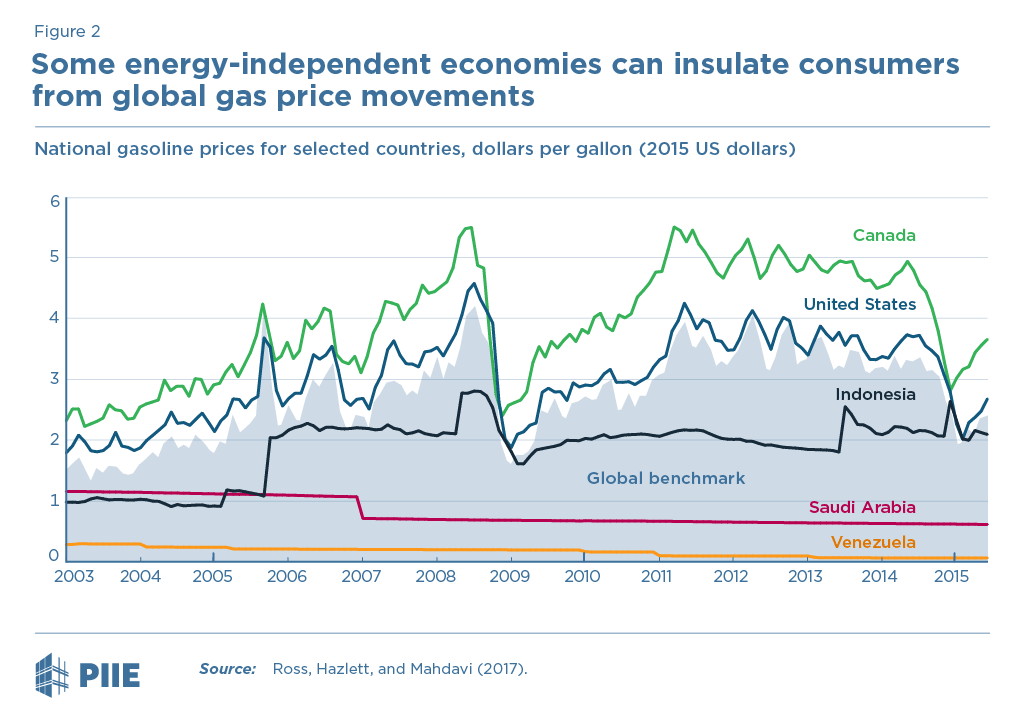 But these countries have achieved this goal by mostly using export revenues to subsidize domestic prices, often at substantial cost. Post-tax energy subsidies amounted to almost 18 percent of GDP in Saudi Arabia in 2015 (Coady et al. 2019). These types of price-insulating subsidies are available to countries whose exports vastly exceed domestic consumption, generating revenues that in some instances dwarf the real economy.

A better comparison for the United States would be Canada, a high-income country with large energy reserves and net exports but also a large, diversified economy. Despite energy independence, Canadian consumers pay prices in line with global prices. Energy independence did not insulate Canadian consumers from price spikes in 2008 or the high prices from 2011 to 2014.

If energy independence does not insulate the United States from dynamics in global markets, it follows that US security interests in oil-producing regions will remain significant. It’s commonly held that US national security interests in the Middle East flow from its dependence on Middle East oil. This gets the story backwards. The Foreign Petroleum Policy of the United States, released in the shadow of growing concerns over a rising Soviet Union in 1944, encouraged a shift from reliance on US domestic production and exports to conservation of US petroleum and the supplying of US and allies’ domestic demand via exports from the Middle East. The goal was to conserve resources in the United States and the Western Hemisphere in the event of an all-out war. That is, US energy dependence on the Middle East flows as much from US security concerns as it causes them.

The health of the US economy, after all, remains contingent on the health of some of its largest trading partners and military allies. As a result, supply shocks in global markets will continue to have clear security implications. The economies of Asia and Europe, along with North America—the three pillars on the global economy—run on imported oil, and China and India become more import-dependent every day. With it, both countries’ interests in projecting military capabilities into oil-producing regions increase in order to prevent supply disruptions, filling a vacuum left by the Trump administration’s reluctance to project US power into the region. Shipping lanes in the Gulf are threatened by both piracy and tensions between Saudi Arabia and Iran. As US commitments to policing these crucial arteries of the world economy wane, rising powers in Asia will become more involved in the region. Whether this can be done in ways that facilitate cooperative policing and burden-sharing is an open question at best.

Reliance on domestic sources of energy will make it more difficult for the United States to address climate change. The economies of Europe and Asia are trying to lower fossil fuel consumption to curb import dependence and also combat global warming. But the United States would be hit economically by reduced energy production, with effects roughly proportional to the volume of energy production (Hendrix and Noland 2014). Thus, US energy independence will likely come at the expense of political will to curb global consumption of fossil fuels, which make up an increasing share of the US economy and US exports.

In addition, the US energy boom is not without social costs. Though commodity booms raise incomes and spirits in the short run, over the long run, economic growth in resource-dependent US counties has been, on average, slower than non-resource-abundant counterparts, even after taking demographics and other income factors into account (James and Aadland 2011). These counties aren’t just in coal-rich Appalachia: Loving, Texas; Lake, Colorado; and Billings, North Dakota are among the counties that have underperformed comparatively resource-scarce counterparts. Many of these localities also experience social ills. Shale-rich US counties have experienced disproportionate increases in property and violent crime rates (James and Smith 2017). Finally, the shale boom has increased corruption in some US states, particularly in those, like Louisiana, that already had sizable resource sectors and legacies of corruption (Tyburski, Egan, and Schneider, forthcoming). These factors point to evidence of a domestic resource curse, with states and counties that specialize in oil and gas production experiencing, on average, paradoxically worse long-run economic outcomes and negative social and political consequences.

The shale revolution is pointing the United States toward energy independence. But this independence won’t mean autonomy from global markets and will come with substantial environmental, and likely significant social, costs at home.

James, Alexander, and David Aadland. 2011. The Curse of National Resources: An Empirical Investigation of US Counties. Resource and Energy Economics 33, no. 2: 440–53.

James, Alexander, and Brock Smith. 2017. There Will Be Blood: Crime Rates in Shale-Rich US Counties. Journal of Environmental Economics and Management 84: 125–52.