The flood of refugees and migrants into Europe continues to ebb. But the future of European migration policy remains clouded by disputes. The deal between the European Union and Turkey, aimed at keeping migrants in the Middle East and Africa, is in danger of unraveling amid accusations by Ankara that the European Union is abandoning its promise to grant visa-free travel to Europe for Turkish nationals. The European Commission has come up with a host of new proposals to deal with migrants, but European leaders continue to debate how to pay for it all.

European governments are certain to continue policies to restrict the number of asylum seekers entering the continent. But with totals now reduced from 2015 levels and the apparent end of the political migration emergency, prospects of far-reaching fundamental reforms of Europe’s migration framework, such as the proposal here for a Migration and Mobility Union, have disappeared. Instead, incremental reform of Europe’s migration policy framework is the only feasible path forward.

The Decline in Irregular Migrant Arrivals in Greece

Refugee arrivals into Greece continue to decline. For the first time, the number in April 2016 (12,578) was lower than the corresponding month in 2015 (29,864). Figure 1 shows that daily inflows into Greece are now almost at the same zero level as into Macedonia, which in early March 2016 closed its border with Greece. As discussed earlier on RealTime, the erection of new physical borders in Europe and the agreement with Turkey on returning irregular migrants, have discouraged would-be migrants to Europe from handing over large parts of their life savings to smugglers in return for a far more uncertain passage. 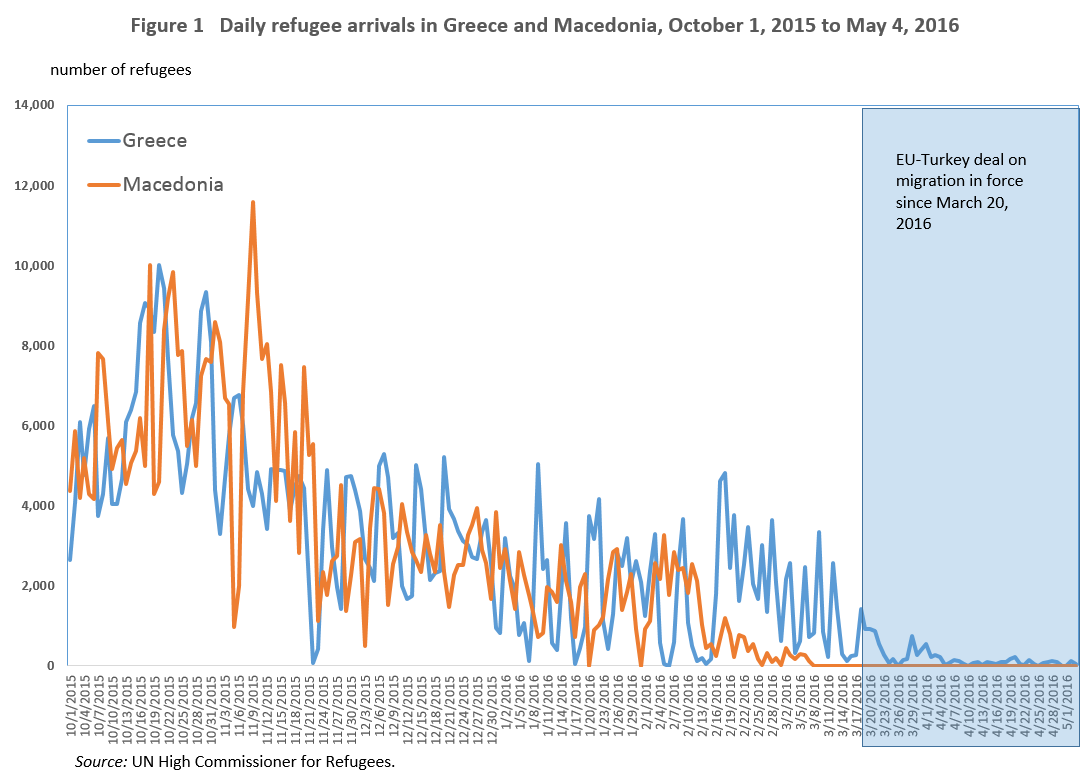 At the same time, there does not appear to have been an increase in migrants through other routes. More migrants arrived in Italy in March and April 2016 than in the two prior months,1 but as for Greece Italy’s April 2016 totals (9,116) were lower than in the same month in 2015 (16,063). More importantly, inflows into Italy in all of 2016 are overwhelmingly male (74 percent) and from Sub-Saharan Africa topped by Nigeria, the Gambia, and Senegal with only 4 percent from non-African countries of origin. Inflows into Italy in other words do not consist of would-be migrants deterred from trying to get to Greece, as arrivals here in 2016 have been almost exclusively from Syria, Afghanistan, Iraq, Pakistan, and Iran.

European leaders can thus be satisfied that they have stabilized the crisis of earlier this year. Stability came too late, however, for the Austrian prime minister, Werner Faymann, who resigned following a disastrous showing of his Social Democratic Party in the first round of presidential elections in April, apparently because of popular outrage over the migration crisis, during which Austria received more than 88,000 asylum seekers in 2015, more per capita than Germany. Figure 2 highlights the number of registered asylum seekers in 2015 in each European Economic Area (EEA) member and the United States, ranking them on a per capita basis. 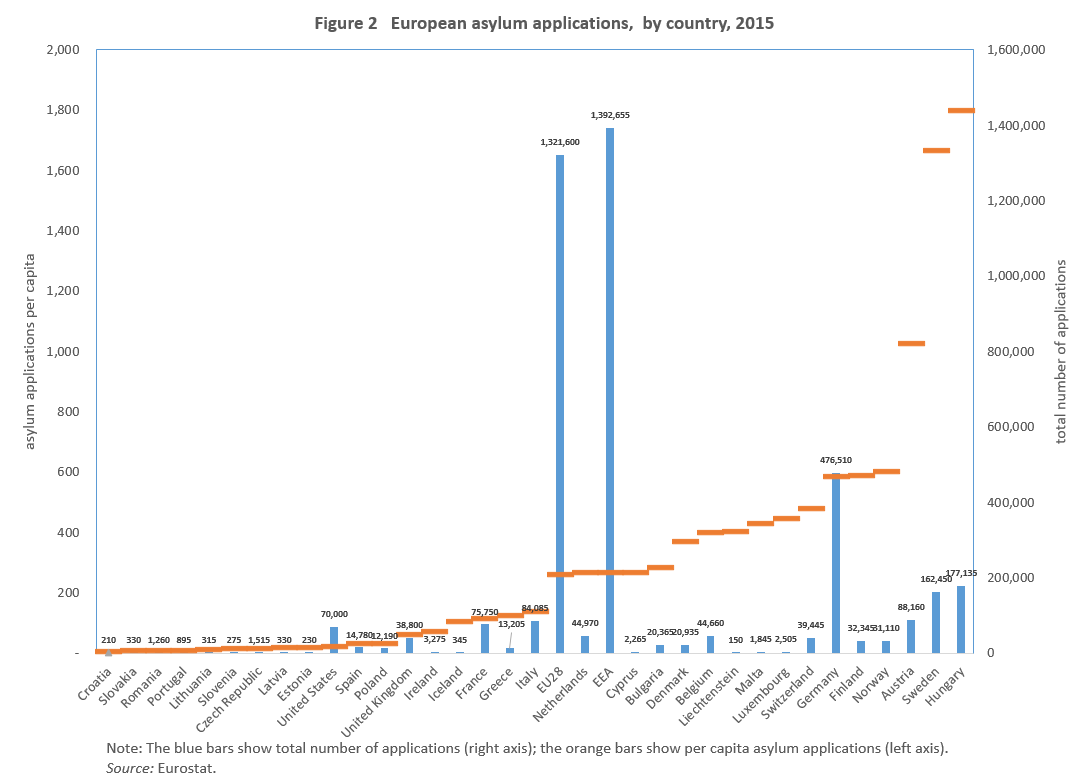 Under the deal between the European Union and Turkey reached on March 20, new “irregular migrants” arriving in Greece were to be sent back to Turkey while EU member states, in return, were to accept one Syrian refugee from Turkey for every one sent back. In addition, EU funds were pledged for Turkey to finance their immigration and resettlement efforts. The possibility of returning refugees from Greece to Turkey has clearly added to the deterrent for would-be migrants of being stuck in Greece unable to cross the border to Macedonia and continue north. The main incentive for the deal for Turkey—visa-free travel for Turks to the Schengen Area—has not yet been delivered, however. On May 4, the European Commission proposed to lift visa restrictions for Turkey, provided Ankara meets certain conditions, including “revising the legislation and practices on terrorism in line with European standards, notably by better aligning the definition of terrorism in order to narrow the scope of the definition.” This condition is politically tough for Turkey to meet, given what it considers to be a war against Kurdish “terrorists.”

But a qualified majority in the EU Council or a majority in the European Parliament may not be available to approve support the offer of visa-free travel for Turkey, especially if the terrorism rules are not met.

A power struggle between President Recep Tayyip Erdogan, who has never publicly endorsed the EU agreement, and Prime Minister Ahmet Davutoglu who proposed the deal, whom Erdogan has forced from office, has also thrown an obstacle in the way of its implementation. As discussed earlier in RealTime, Erdogan’s principal goal is to change the Turkish constitution and make himself a strongman executive president even as European nations are likely to oppose such a move. Erdogan may well ditch the deal soon. In a recent public speech Erdogan explicitly ruled out changing its anti-terror laws, which he relies on to pursue opposition media and academics. Forced to choose between loosening control of power in Turkey or accepting Europe’s demands to get a visa deal (which is likely to be popular among many Turks with relatives in Europe), there is little doubt that Erdogan will choose the former and blame Europe for the demise of the deal.

Come summer, the prospects for the agreement hence look very bleak, though with the Macedonian border fence still in place, this is really mostly a risk to Greece from increased irregular migration from Turkey rather than to Europe as a whole. Another political victim will of course be Angela Merkel, who will have wasted quite a lot of political energy on getting a deal that only lasted a few months. It will not, however, harm the Chancellor too much, as her domestic political fortunes are ultimately linked to the level of irregular migrants arriving in Germany, which the Macedonian fence will keep very low.

If the EU-Turkey deal falls apart, Europe must come up with a new plan to deal with refugees and stabilize the situation in Greece. Should Europe lose the possibility of returning refugees from Greece to Turkey, and of Turkish authorities cracking down on human smugglers, there still may not be a massive new inflow of refugees to Greece. Few of them are likely to want to pay smugglers for the privilege of getting stranded in Greece. Without the opportunity to ship rejected refugees back to Turkey, the European Union may try to send them directly back to their countries of origin. Such an eventuality would end up establishing new camps in Greece that would—as discussed earlier here on RealTime—become de facto Australian-style offshore island based internment camps for refugees until they are expelled.