We Are Unsatisfied Most of the Time

Pew Research public opinion surveys from 2007 to 2014 reveal that a majority of citizens in most countries are generally unsatisfied with the way things are going most of the time.1

About 30 percent of respondents in 48 countries reported being satisfied on average over the 8-year period (figure 1). Only in 12 percent of the countries on average in any year was the level of satisfaction 50 percent or more.2 On both metrics, a relatively high degree of satisfaction was recorded in 2008, before the outbreak of the global recession and financial crisis.3 Satisfaction levels dipped in 2009 but apparently have regained their precrisis averages in the past two years. 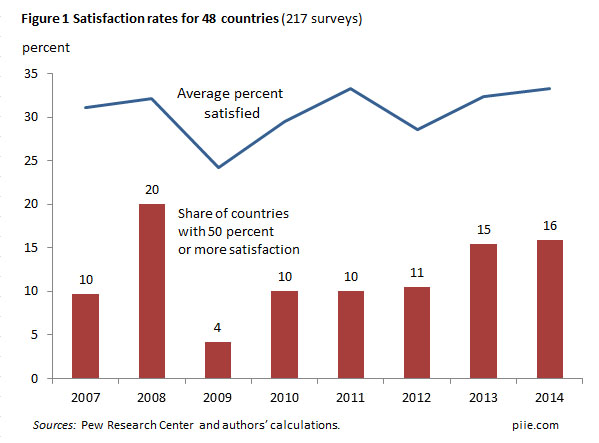 For a smaller subset of 24 countries with at least four surveys in the 8-year period, the pattern is slightly less positive (figure 2). The average degree of satisfaction for this group has been just under 30 percent. In a "typical" year, approximately one in ten countries registered satisfaction rates of 50 percent or more, and the business cycle is more visible in the data. 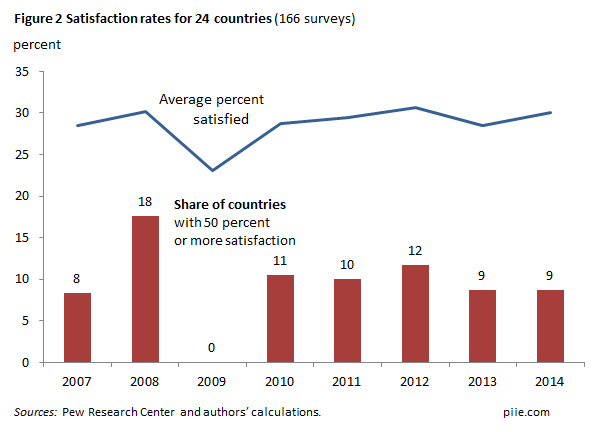 What about the United States? George Gao from Pew Research points out that American respondents stand out from other advanced economies because they are significantly more likely to say they were "having a particularly good day." According to this Pew survey, 41 percent characterized their day as "particularly good" in contrast with only 21 percent in Germany, 27 percent in the United Kingdom, and 8 percent in Japan. It would appear, though, that US optimism about a particular day does not translate into a favorable view of the direction of the way things are going in the United States in general. Over the past eight years, satisfaction with the way things were going in the United States has averaged 29 percent, short of the 45 percent in Germany, the 30 percent in the United Kingdom, and close to the 25 percent in Japan. Apparently, attitudes toward personal circumstances do not translate directly into attitudes about the direction one's own country may be taking.

In summary, although on average most people in most countries say they are unsatisfied with the way things are going in their countries most of the time, not all countries fit this generalization at all times. In individual countries, responses are affected by culture and circumstances. Macroeconomic conditions are only one of many factors that influence such satisfaction levels.

1. The data for this posting are from the Pew Research Center and responses to its question "Overall, are you satisfied or dissatisfied with the way things are going in our country today?" See http://www.pewglobal.org/question-search/?qid=784&cntIDs=&stdIDs (accessed March 16, 2015).

2. For this calculation, we deleted the responses of those who answered that they did not know or would not respond.

4, See Simeon Djankov's recent post for a discussion of the Russian case. He reports that surveys of happiness in Russia show an improvement from 41 percent in December 2013 to 44 percent in December 2014, and a somewhat surprising 52 percent earlier this year. In contrast, the Pew survey of satisfaction, which asks the different question of satisfaction with the direction the country is heading in, rose from 37 percent in the spring of 2013 to 56 percent in the spring of 2014.