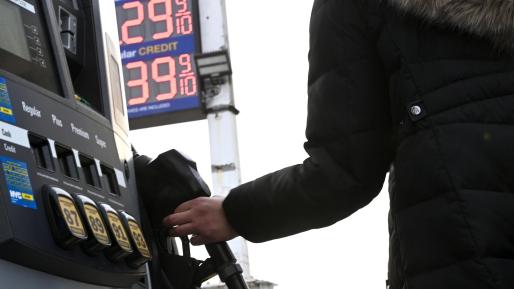 US wages grew at fastest pace in decades in 2021, but prices grew even more

Over the last three months nominal wages and salaries for all civilian workers slowed slightly but still rose at a fast 4.4 percent annual rate, according to the newly released Employment Cost Index (ECI) data from the Bureau of Labor Statistics (BLS). Since December of 2020, nominal wages and salaries were up 4.5 percent, the fastest increase since 1983. These increases bring nominal wages and salaries to 1.2 percent above their pre-pandemic trend. Unlike the monthly average hourly earnings data, the ECI data holds the composition of employment constant, so it is not distorted when, for example, low-wage workers disproportionately lose or gain jobs.

Prices, however, have also risen rapidly, and so inflation-adjusted wages fell by 4.3 percent at an annual rate over the last three months, 2.4 percent over the last year and 1.2 percent lower than they were in December 2019. Inflation-adjusted wages should have grown 2.1 percent over this period if pre-pandemic trends had continued, leaving real wages well below their pre-pandemic trend. While nominal wages have still grown faster in some sectors relative to its pre-pandemic trend, all sectors have seen below-trend real wage growth.

Looking at compensation, which also includes benefits like health insurance, tells a similar story—a strong increase from September to December, tracking well above expected for nominal growth, but still not enough to keep up with inflation.

The outlook for real wage growth depends on several factors including: (i) the tightness of labor markets, which should lead to more upward pressure on nominal wages than on prices; (ii) whether employers adjust nominal wage growth up to reflect the higher inflation, something that was standard in contracts and bargaining in earlier periods of high inflation but has largely been absent for several decades; and (iii) the outlook for inflation, in particular whether it persists well above the historical expectation of 2 percent annual growth.

The BLS releases ECI statistics, showing compensation, wage, and benefit growth over the prior three months, four times a year. The ECI shows changes in wages and benefits in a manner that fixes the composition of the workforce. This is important, particularly when there are large changes in employment, because these data are not subject to the same distortions as the monthly average hourly earnings series, which can artificially be increased when low-wage workers lose their jobs and drop out of the sample (as happened in 2020) or artificially be decreased when these same workers are hired back (as happened in 2021). By fixing workforce composition, the ECI provides a more accurate picture of what is actually happening to wages.

From September to December, nominal wages rose at a 4.4 percent annual rate, a pickup from the pace earlier in the pandemic period but slightly slower than the very fast pace of growth over the prior three months.

Nominal compensation grew at a 4.2 percent rate over the last three months, reflecting slightly slower growth in the cost of benefits than in wages. 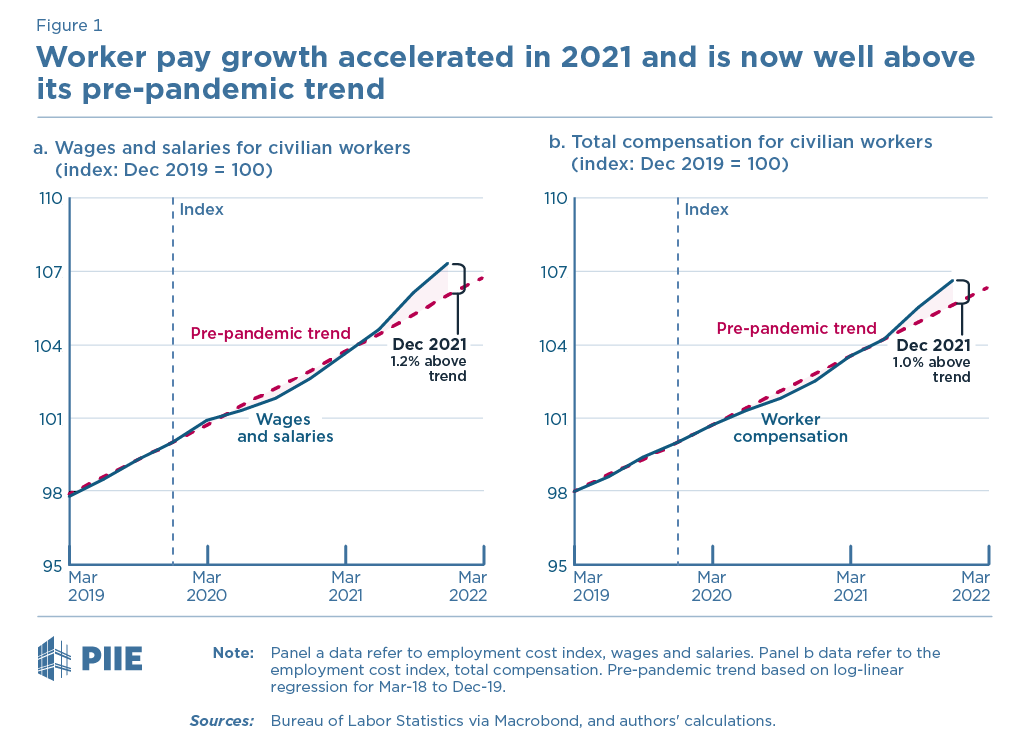 At the beginning of 2021, various indicators indicated that there was still substantial slack in the labor market. Both the unemployment rate and the prime-age employment rate were above their average level from 2001 to 2018, a time with substantial periods of labor market slack. Other measures, like the quits rate and the number of unemployed workers per job opening, indicated greater, but not extreme, levels of tightness. Over the course of 2021, all four measures have gotten tighter, as shown in figure 2, though to varying degrees. The prime-age employment rate continues to indicate modest levels of tightness, while the quits rate suggests the labor market is much tighter than it has been in decades. The fast pace of nominal wage growth during 2021 seems to be most consistent with indicators showing substantial tightness in the labor market. 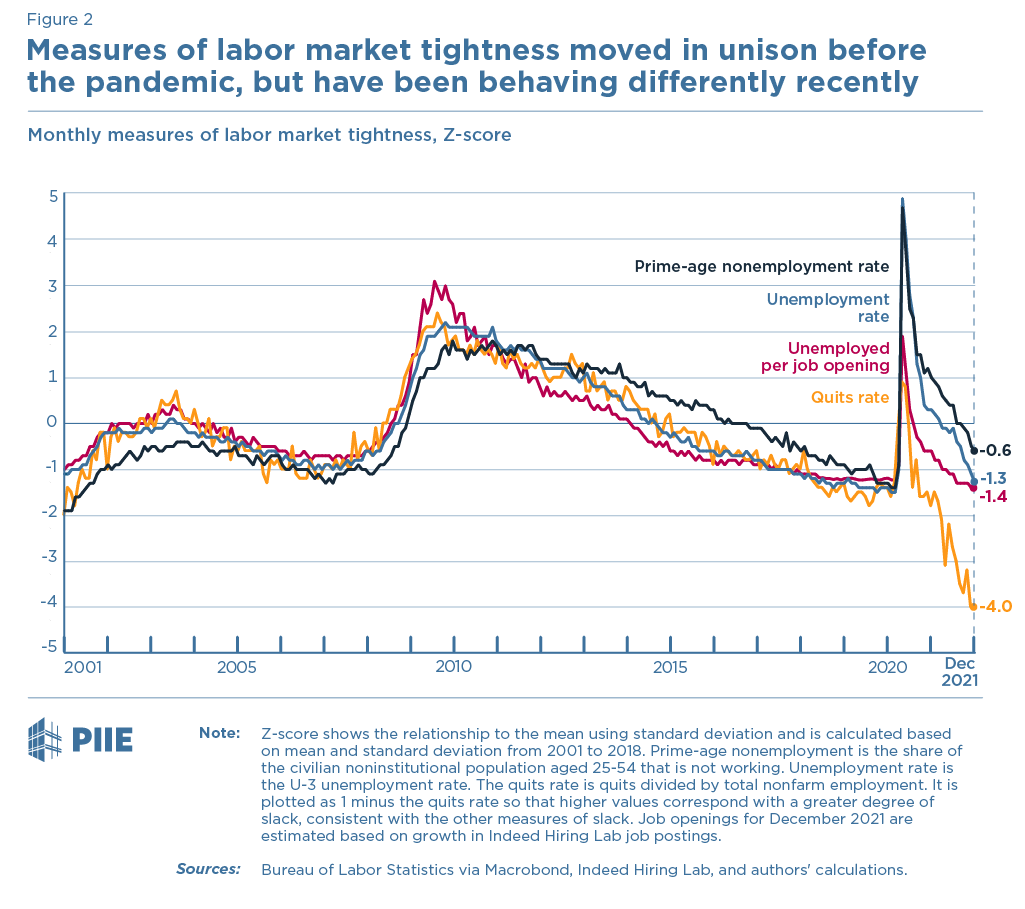 After slowing somewhat from June to September, inflation accelerated again over the last three months, growing at a 9.1 percent annual pace as measured by the consumer price index for all urban consumers (CPI-U). Since the pandemic began, consumer prices have risen at a 4.2 percent annual rate, bringing them 4.7 percent above their pre-pandemic trend as shown in figure 3. Prices for urban wage earners and clerical workers, as measured by the CPI-W, have grown even faster and are now 5.9 percent above their pre-pandemic trend. 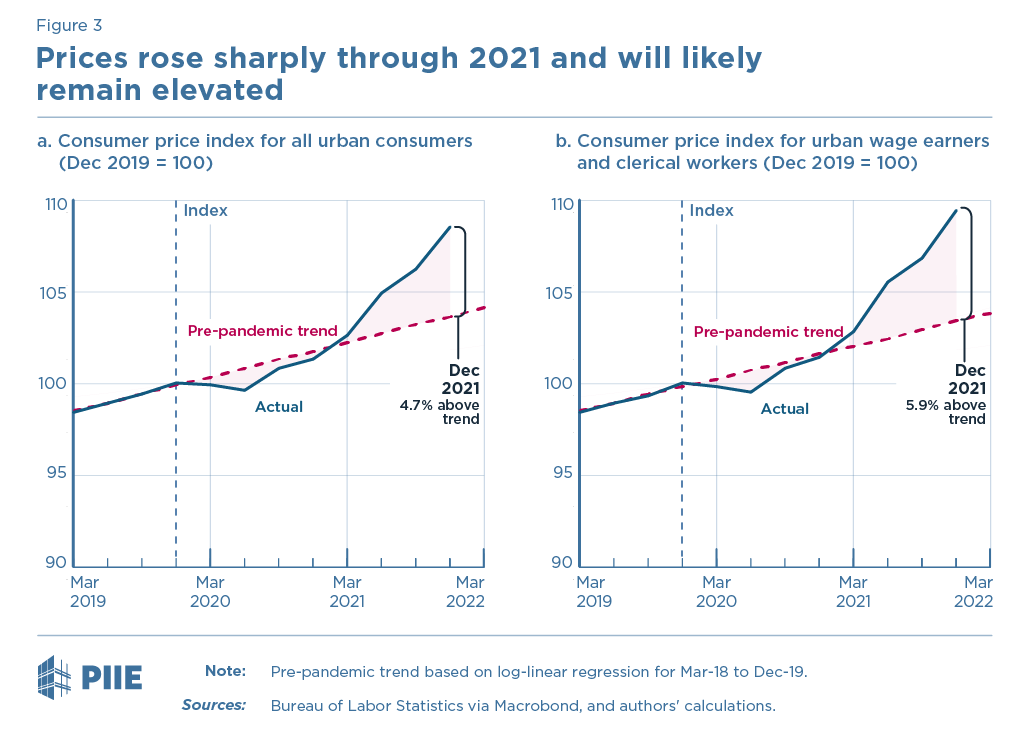 Increased demand has also played a role in higher inflation, and there is reason to believe that demand may stay elevated (because of higher bank balances, extremely accommodative financial conditions, and continued spendout of stimulus), while supply will continue to face shortfalls (because full labor market recovery will take time and because of other pandemic-related scarring and protracted supply chain problems). In addition, rent and other shelter costs are likely to increase at a faster pace, and some wage increases may pass through to price increases. As a result, our expectation is that inflation will continue to be well above its historic 2 percent value through 2022, plausibly in the 3 to 4 percent range.

Steady and predictable inflation does not generally impact real wages, and, in fact, if this inflation results from higher employment levels, it may eventually even raise real wages. Large and unexpected inflation, however, can reduce real wages—especially if employers do not build cost-of-living adjustments into their wage increases.

As a Result, Real Wages and Compensation Have Fallen 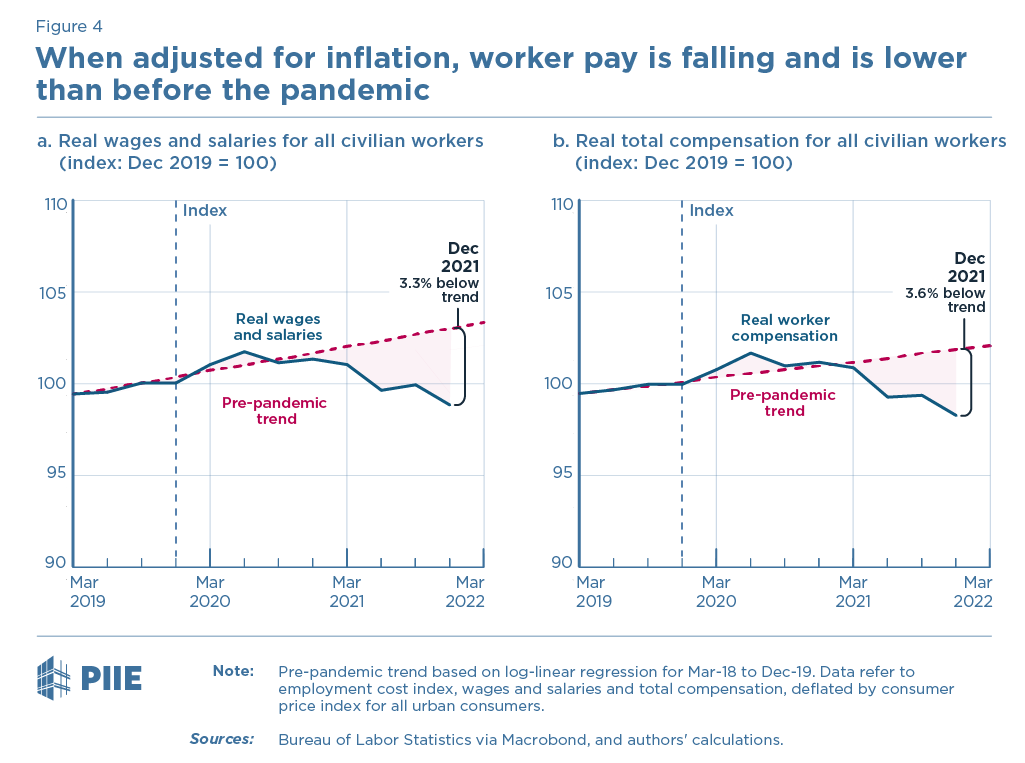 Since ECI data is only reported every third month, we have to use average hourly earnings to help approximate how wages have changed since the pandemic began in February 2020. From December 2019 to February 2020, average hourly earnings for all private employees grew 0.5 percent. Over the same period, the CPI-U grew by 0.2 percent, so real wages grew by about 0.3 percent. This suggests that the real wage decline since the start of the pandemic was likely somewhat larger than the decline since the end of 2019.

All of our analysis uses the CPI-U. But inflation rates are different for different people based on what they consume and where they purchase it. The BLS's CPI-W is an attempt to reflect the prices faced by workers in roughly the bottom half of the wage distribution, and the official government data use the CPI-W when estimating the real wage increases for production and nonsupervisory workers (i.e., nonmanagers). Using CPI-W, real wages would have fallen even more than shown in our estimates.

The growth of wages has varied across industries, from a high of a 6.2 percent annual rate since December 2019 in leisure and hospitality to a low of a 2.6 percent annual rate for utilities. In most sectors, however, faster inflation has resulted in lower real wages and have left real wages below trend in all sectors (real compensation is also below trend for all sectors). The pattern of wage growth is a result of a number of idiosyncratic factors depending on the pace of reopening and the supply of workers for different sectors, although there is some indication that wage growth has been faster in lower-wage sectors.

Compared with the global financial crisis, nominal wage growth has held up much better in the COVID-19 recession. While nominal wage growth initially followed, and then exceeded, its previous trend during the pandemic recession, in the global financial crisis, it slowed sharply, leaving wages 2.7 percent below trend after 8 quarters (figure 5a). Last time, a driving factor was insufficient demand, which put downward pressure on both wage growth and price growth. This time, more expansionary policy has supported demand, putting upward pressure on both wages and prices. After the initial recessionary shock, the net effect has been to leave wages well below trend in the COVID-19 recession but largely above trend following the global financial crisis (figure 5b). 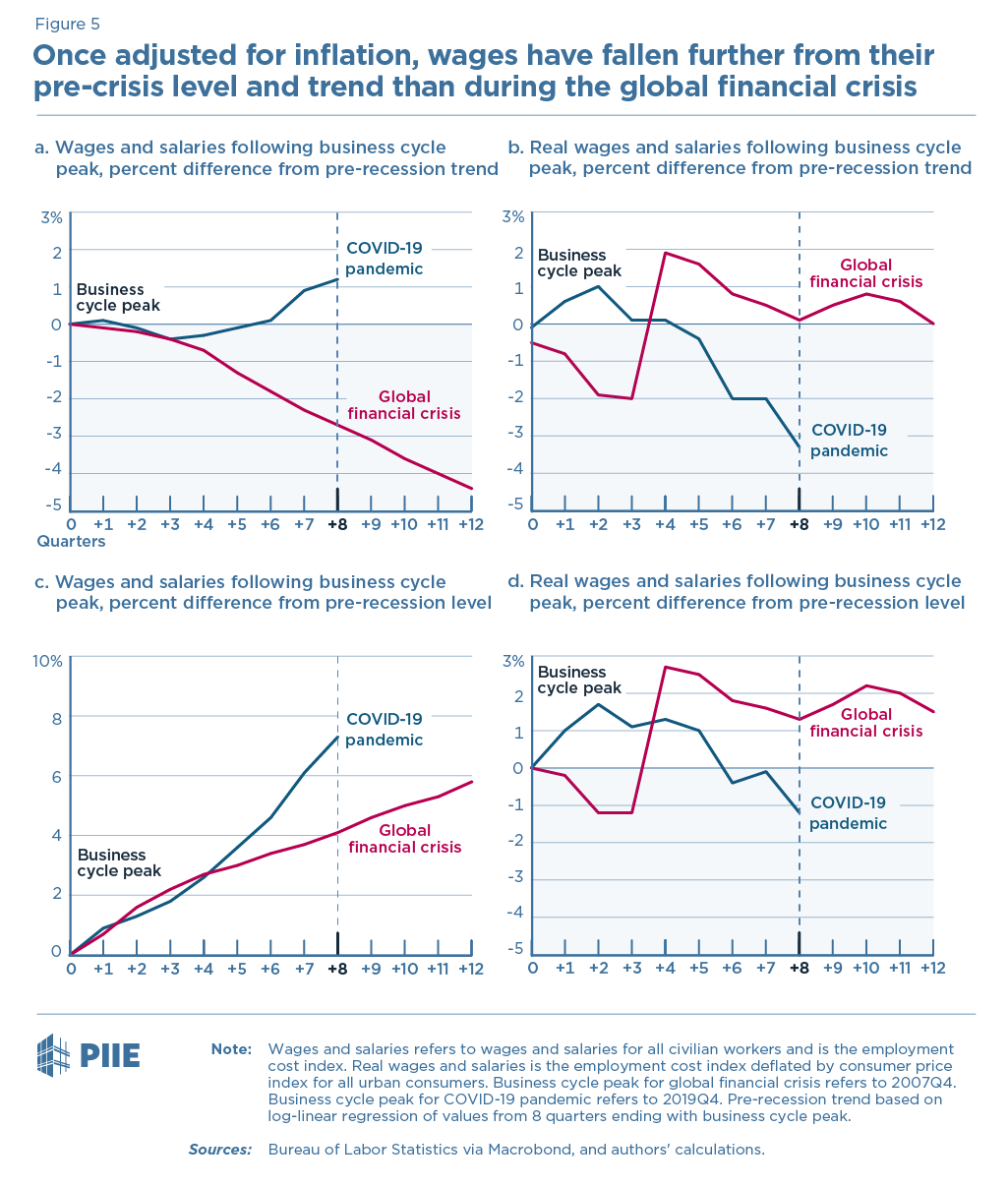 Part of the difference reflects different growth rates before each recession. Before the global financial crisis, wages had been growing at a 3.4 percent rate, 0.5 percentage point faster than their pace before the COVID-19 recession. So even though wage growth was well below trend in the global financial crisis, through the first 4 quarters, it was still comparable to wage growth during the COVID-19 recession (figure 5c). The patterns for real wages are similar, however, whether compared with the pre-recession level or the pre-recession trend (figure 5d).

Nominal compensation growth is likely to continue to be strong in 2022, as the labor market is very tight and at least some of the price increases are passed through to wages. Overall inflation is likely to moderate at least somewhat in 2022, as volatile components like food and energy may return to more normal increases. As a result, the best guess would be that real wages rise in 2022. It is unlikely, however, that any increase will be large enough for real wages to return to their previous trend.

US wages are rising rapidly, but not enough to keep up with inflation