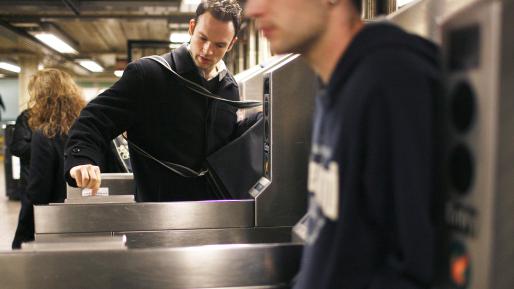 What is the best measure of labor market tightness?

This blog was updated on November 23 to add analysis of the job quits rate.

Economists have long relied on measures of slack, like the unemployment rate, to predict variables like the inflation rate or nominal wage growth. This analysis investigates three questions: First, what was the best univariate predictor of changes in wage or price growth in the United States over the roughly two decades prior to the pandemic? Second, which measures of wage or price growth are most predictable? And third, how might the answers to these two questions be changing in the current circumstances and going forward? Based on performance prior to the pandemic, all of the predictors work in a broadly similar manner in predicting different measures of wage and price growth. The job quits rate is the best predictor of nominal wage growth followed by prime-age (25-54) nonemployment and total unemployment. The ratio of unemployed workers to job openings is the best predictor of core Consumer Price Index (CPI) inflation followed closely by the quits rate and the unemployment rate. And prime-age nonemployment is the best predictor of real wage growth.

Today, these measures of slack are telling very different stories about the economy. The unemployed-to-job openings ratio and the quits rate, which have indicated much more tightness than other measures of slack, have been most consistent with recent fast wage growth and inflation and should get meaningful weight in judgments about the future of labor markets and price growth—likely more weight than the prime-age nonemployment rate (which varies a lot for reasons unrelated to slack over time) and possibly even the unemployment rate.

Originally, the Phillips curve was based on the relationship between unemployment and wage growth—when the unemployment rate is lower, wage growth is higher or rising or above its expected value (depending on the version of the Phillips curve). In recent years, economists have explored the relationship between wage growth and inflation and a wide range of alternative measures of slack including short-term unemployment and the prime-age employment rate (which reflects changes both to unemployment and labor force participation). There has been resurgent interest in looking at measures that include information from the employer side, such as the ratio of unemployed to job openings, to assess labor market tightness.

In our analysis we examine four different predictors: the headline unemployment rate (or U-3), the prime-age nonemployment rate (this is one minus the more familiar prime-age employment-to-population ratio so that lower is consistent with a tighter labor market), the ratio of unemployed workers to job openings, and the quits rate (quits divided by total nonfarm employment). In the roughly two-decade period prior to the pandemic (the longest period for which all four measures of slack we consider are available) these different predictors largely moved together closely as shown in figure 1, which rescales them to ensure they all have the same mean and standard deviation for ease of comparison (to be directionally consistent with the other three measures of slack, in regression models and graphs we use 1 minus the quits rate so that higher values correspond to a higher degree of slack). While there are some differences, for example, prime-age nonemployment recovered more slowly following the Great Recession of 2007-2009 than the other measures, the overall trends are very similar. This general similarity in movements means that in normal times they make the same broad predictions.

Lately, however, these predictors have behaved very differently, giving rise to renewed interest in distinguishing between them. In particular, the quits rate and the ratio of unemployed workers to job openings are the tightest on record and would predict rapid wage and price growth over the next year. In contrast, the prime-age nonemployment rate is almost exactly at its average for our sample period, predicting normal wage and price growth. The unemployment rate is somewhat below average. 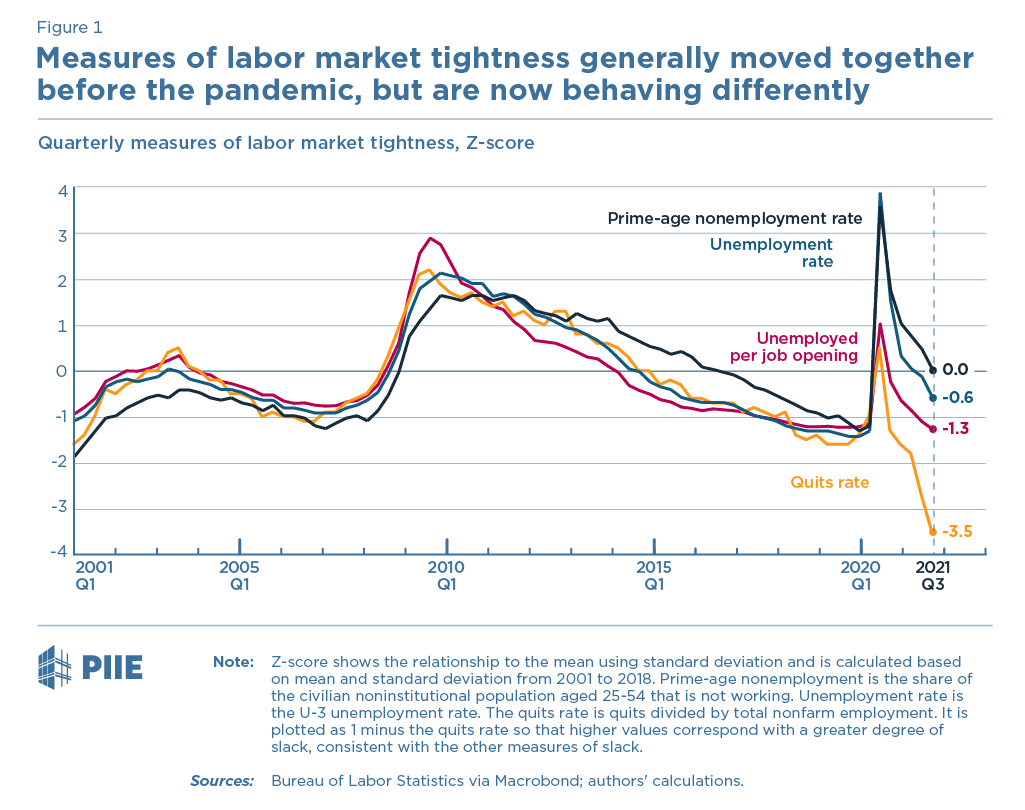 The Phillips curve has been used to predict both inflation and wage growth. Some aspects of price inflation, like energy prices, are largely determined by global factors that are not tightly related to labor market tightness in the United States. As a result, it is more useful to use labor market slack to predict core inflation, which excludes the relatively volatile and more internationally determined food and energy categories, rather than overall inflation. Additionally, these international concerns are likely less of a concern when using measures of domestic labor market slack to predict measures of domestic labor market performance, such as nominal wage growth, real wage growth, or the degree to which real wage growth exceeds productivity growth (i.e., real unit labor costs).

These different metrics of the consequences of labor market tightness are relatively noisy and often have behaved very differently from each other over the last 20 years as shown in figure 2. 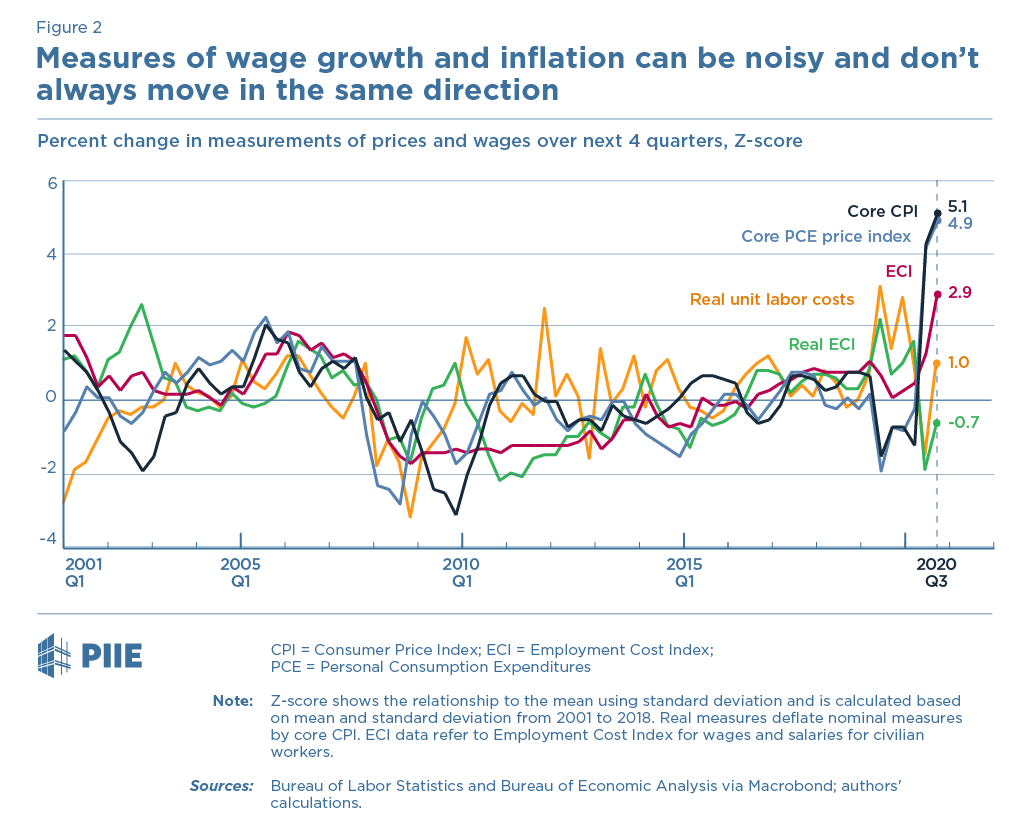 We assess the different predictors in two different Phillips curve models. The first is a traditional  Phillips curve that relates current measures of slack to changes in prices or wages over the next year. This model gives rise to a permanent tradeoff between unemployment (or other measures of slack) and inflation (or other measures of the consequences of slack). This may be most appropriate when inflation expectations are very stable. The second is an autoregressive Phillips curve, with the lagged term serving as a proxy for time-varying inflation or wage growth expectations. The equations for these two are:

We estimate these models using measures of slack from 2001, the first year all four measures of slack are available, through 2019 for wage growth and inflation. Our sample deliberately ends before the pandemic.

The traditional Phillips curve models can be illustrated with scatterplots, which are shown here for nominal wage growth as the predicted variable with our four predictors (figure 3). All  four models work reasonably well.

We present results for a total of 40 models using 4 different predictors * 5 different predicted variables * two specifications. As expected, the coefficient on the lagged slack term was negative in all models for each predicted variable, except real unit labor costs, with the negative coefficient statistically significant at the 5 percent level or better in 27 of the models (the exceptions are some models for core Personal Consumption Expenditures [PCE] inflation and real Employment Cost Index [ECI] wage and salary growth).[1]

We compare the full set of models, predictors, and predicted variables by comparing their adjusted R2s, a measure of what fraction of the variation in the predicted variable is explained by the different measures. These are shown in the table. (We also looked at a range of other variables including job openings rate, short-term unemployment, ECI total compensation, and average hourly earnings with similar or slightly worse results than these.)

A few observations on these results:

How stable are the relationships between these variables?

Even though the relationship between prime-age nonemployment and wages works well in the 18 years prior to 2019, it works very badly over a longer period as shown in figure 4, panel a. It is possible that all of the structural shifts that have affected labor force participation rates over the previous decades have played out and that labor force participation has stabilized, but the many slow-moving structural factors that affect even prime-age participation rates over time and across countries suggest that counting on stability is risky. 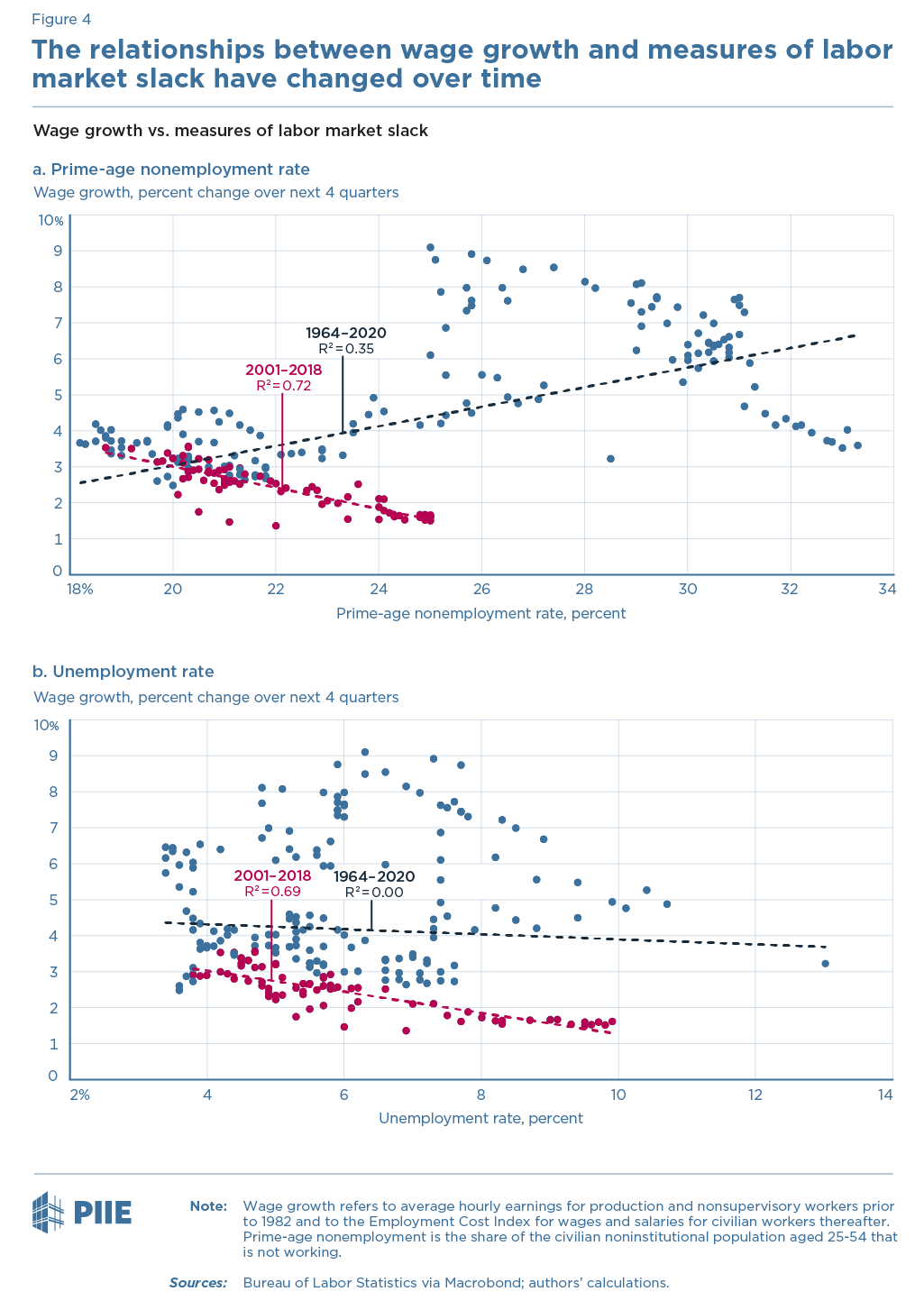 In addition to the general concerns about the stability of these relationships over time, economists have also raised questions about how well jobs openings data capture employers' true demand for workers. Employers may have an active job posting because they are seeking to hire someone imminently, but they may also have a job posting because they might want to hire someone at some point in the future. Over time, the average amount of employer search intensity per job opening can fluctuate, which affects the interpretation of job openings as a measure of demand for workers. There are similar fluctuations in the job search intensity of the unemployed, but a technological shift towards more online hiring raises concerns that job openings today mean something different than they did 15 years ago.

This is a reasonable concern, but we do not find much reason in the data to think that such technological shifts resulted in a unique change to the predictive relationship within our sample window for the ratio of unemployed to job openings. The intercepts and/or coefficients in the regressions change around the Great Recession across our models, and the change does not appear to be systematically larger for models that include job openings (see appendix figures). It is possible that the relationship between measured job openings and true slack will change but at least since 2001, the data show that the number of unemployed workers divided by job openings has been meaningfully predictive, something that would not be the case if the structural changes and variations in the meaning of openings over this period were particularly large.

Applying these results to the present situation

The four measures of labor market slack behaved similarly in the 18 years leading up to the pandemic but have behaved very differently since the start of the pandemic. This divergence has continued in recent data with the prime-age nonemployment rate at its average over the roughly two decades prior to the pandemic but the ratio of unemployed to job openings and the quits rate indicating the tightest labor market on record, with the quits rate even more tight relative to its historical values than the ratio of unemployed to job openings. This presents the sharpest test of potential differences in the properties of these predictors, albeit one that is heavily confounded by all of the other changes happening as the US economy emerges from the pandemic.