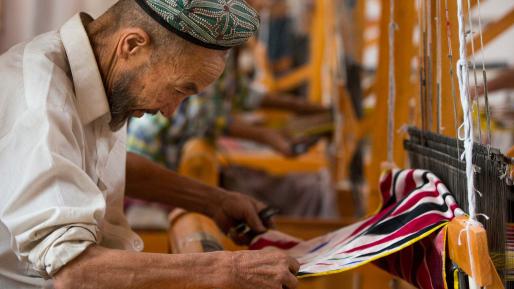 This blog post, originally published on December 13, 2021, has been updated to reflect legislative changes.

On December 23, President Joseph R. Biden Jr. signed into law the Uyghur Forced Labor Prevention Act, a measure intended to keep US consumers from being unwitting accomplices to the grave human rights abuses the Chinese government is perpetrating in the Xinjiang Autonomous Region (henceforth Xinjiang). The new law follows the Biden administration's announcement on December 6 of a diplomatic boycott of the 2022 Olympic Winter Games in Beijing, a boycott joined by a variety of other (and to date mostly Anglophone) countries.

The law is a constructive move to address the systematic repression of Uyghur Muslims and other ethnic and religious minorities in the region. It sets an extremely high bar for firms that would import goods manufactured in whole or in part there to the United States. But it does not address the broader problem of forced labor practices in other parts of China, and its effects will reverberate through global cotton and solar markets.

The heart of the law is the requirement that firms provide "clear and convincing evidence" that any products imported into the United States are not made with forced labor. This amounts to a second-best response to the inability of Customs and Border Protection to do independent investigations on the scale required due to lack of resources and the likely lack of cooperation by Chinese authorities if they tried. In doing so, it places a presumption of guilty-until-proven-innocent on said products. Proving innocence will be a nearly impossible task. The most common approach to ensuring certifying products as "clean" from a human rights perspective is third-party auditing, in which an independent third party observes conditions at production facilities in order to verify that labor abuses are not occurring.

As Cullen Hendrix has argued, credible third-party audits are effectively impossible in an environment like Xinjiang's: Third-party audits are only effective if third parties—typically nongovernmental organizations like Verité—are allowed to do their jobs, probing the supply chain for evidence of forced labor and other types of labor abuses. China is among the most strictly controlled information and media environments on earth, and conditions in Xinjiang are more restrictive still. The Chinese government has stopped independent auditors at airports and sent them back or forced them to use government-supplied interpreters/minders. Locals, even Han locals, who speak to the foreign press are subject to arrest. Tellingly, Chinese authorities raided and shut down Verité's Chinese subsidiary in August. Meeting the "clearing and convincing" evidentiary bar will be incredibly difficult, creating strong incentives for evasion and intentional product mislabeling.

The law acknowledges but does not immediately address the issue of forced labor outside the region. A large-scale Chinese government program "pairs" firms based in eastern China with entities in Xinjiang, sometimes assigning the firms to build and operate factories within re-education camps. This practice is sometimes referred to as "Xinjiang Aid." Participation in this program is believed to increase both the likelihood of being asked to employ workers released from detention facilities and mobilized (and relocated) under "poverty alleviation" programs and access to direct and indirect subsidies.

Press reports have linked forced labor to the production of personal protective equipment (some of which ended up in the United States) and solar panels. A 2019 study yielded a conservative estimate of 100,000 ex-detainees working under conditions of potentially forced labor. A more recent study documents at least 80,000 former detainees sent to facilities outside Xinjiang, some coming straight from detention, a figure the authors view as very conservative as well. Addressing Xinjiang-sourced forced labor in the broader Chinese economy would require a different approach than those put forward by this law. What the law does do is require the Administration to present a plan for grappling with the issue of forced labor outside Xinjiang, as well as report on the resources needed for Customs and Border Protection enforcement.

Effectively banning imports from Xinjiang is no small thing. Though the Xinjiang economy is relatively small, accounting for just 1.4 percent of Chinese GDP, it is globally pivotal in two products: cotton and refined polysilicon. Xinjiang accounts for nearly 20 percent of global cotton production, with annual production greater than that of the entire United States. Its position in refined polysilicon—the material from which solar panels are built—is even more dominant, accounting for nearly half of global production. Virtually all silicon-based solar panels are likely to contain some Xinjiang-sourced silicon, according to Jenny Chase, head of solar analysis at Bloomberg New Energy Finance. As such, the law will send apparel producers and the US solar industry scrambling to find alternative sources of supply and prices are bound to increase.

The situation in Xinjiang is dire, and the upcoming Winter Games will only intensify pressure on governments and firms to take decisive stances and actions in response to human rights conditions in the region. The law will ratchet that pressure up further still, and both the Chinese government and Chinese consumers are bound to retaliate. But if Chinese government actions in Xinjiang amount to genocide or at least crimes against humanity—findings reached by the US government, the British, Dutch, and Lithuanian parliaments, Amnesty International, Human Rights Watch, and the United States Holocaust Memorial Museum—then strong, costly action is required.

Taxing China's Assets: How to Increase US Employment Without Launching a Trade War