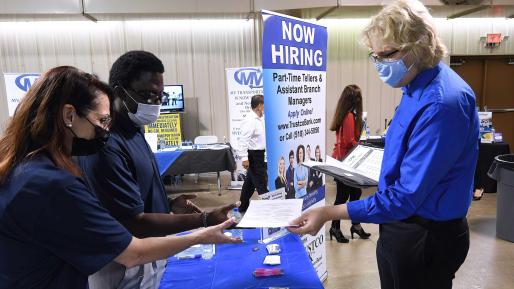 The latest data sent mixed signals for what happened in US labor markets in November, with the normally more reliable payroll survey showing only 210,000 jobs added while the household survey showed a dramatic decline in the unemployment rate to 4.2 percent as labor force participation grew and employment rose by more than 1 million. The difference between these two may be in large part due to measurement error and noise, and the payroll number itself will be revised over time.

In this blog, we step back to analyze the evolution of the labor market over the last year. While talk of the "Great Resignation" may leave the impression that employment is surprisingly low, that is not the case. Since last December, the economy has added an average of 555,000 jobs per month, about the monthly pace expected by the Survey of Professional Forecasters in forecasts published earlier this year. This is the result of two offsetting factors: The demand for labor increased much more rapidly than most people expected, as evidenced by an estimated 11 million job openings in November, but at the same time the supply of labor has disappointed, as evidenced by the continued low level of labor force participation. Together, these developments have contributed to faster nominal wage growth, with nominal wages well above their pre-pandemic trends—although this increase has been lost to higher inflation.

The unemployment rate is lower than expected, below the 4.9 percent rate that the Survey of Professional Forecasters in May was expecting for November. At the same time, the labor force participation is likely lower than what was implicitly forecast.

Overall, the economy is still 5 million jobs short of pre-pandemic projections (adjusted for changes in population growth). It is likely that this gap will continue to narrow in the coming months, but rapid progress could get harder both because the jobs may get increasingly harder to fill and because of the uncertainty associated with the rise of the Omicron variant. Nevertheless, the fact that the economy continued a relatively rapid pace of job growth after the rise of the Delta variant suggests that continued economic progress is likely.

The Labor Market Is 5 Million Jobs Short of Normal

The gap between the labor market and normality continued to narrow in November, but the economy remains 5 million jobs short of pre-pandemic projections adjusted for population as shown in figure 1 (or 6 million jobs short of the original pre-pandemic projection). We use the Congressional Budget Office's (CBO) January 2020 forecast for a projection of where jobs might plausibly have been, absent the emergence of the COVID-19 pandemic and the economic response it engendered. The civilian noninstitutional population ages 16 and older in November 2021 was 2.1 million (or 0.8 percent) lower than CBO had originally forecast, with excess mortality and reduced immigration both large factors. By scaling down CBO's original employment forecast by 0.8 percent, we are effectively assuming that CBO was projecting employment rates not employment levels. (Note, the employment rate of people who have died because of COVID-19 was likely lower than the CBO average, but the employment rate for missing immigrants would likely have been higher than CBO forecast, so the two errors in this simple adjustment likely roughly cancel out.) 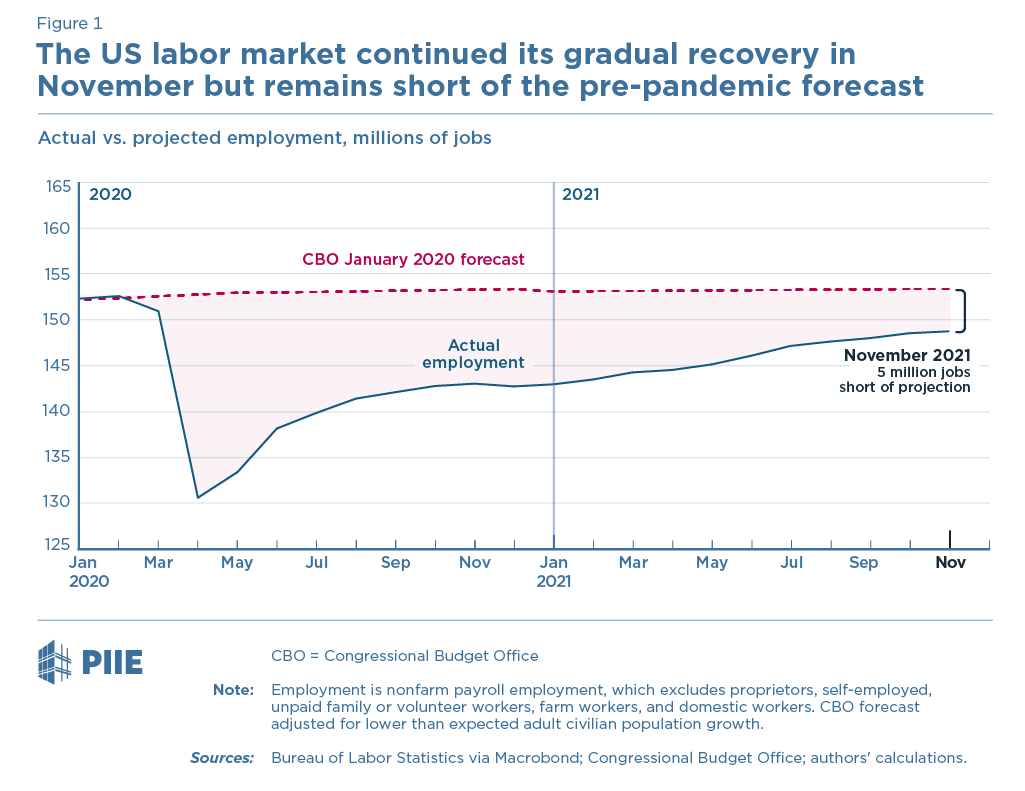 The unemployment rate is now only 0.7 percentage point higher than it was prior to the pandemic. But with 1.8 million fewer people in the labor force than would be expected given the state of the economy, the labor market is less recovered than the unemployment rate would suggest. The "realistic" unemployment rate, which adjusts for misclassification and the unusually large decline in the labor force participation rate since the beginning of the pandemic, was 1.9 percentage point above its pre-pandemic level in November (figure 2). This is consistent both with the still depressed labor force participation rate and employment-population ratio, which are 1.0 and 1.4 percentage point below their respective pre-pandemic values (adjusted for demographic changes). 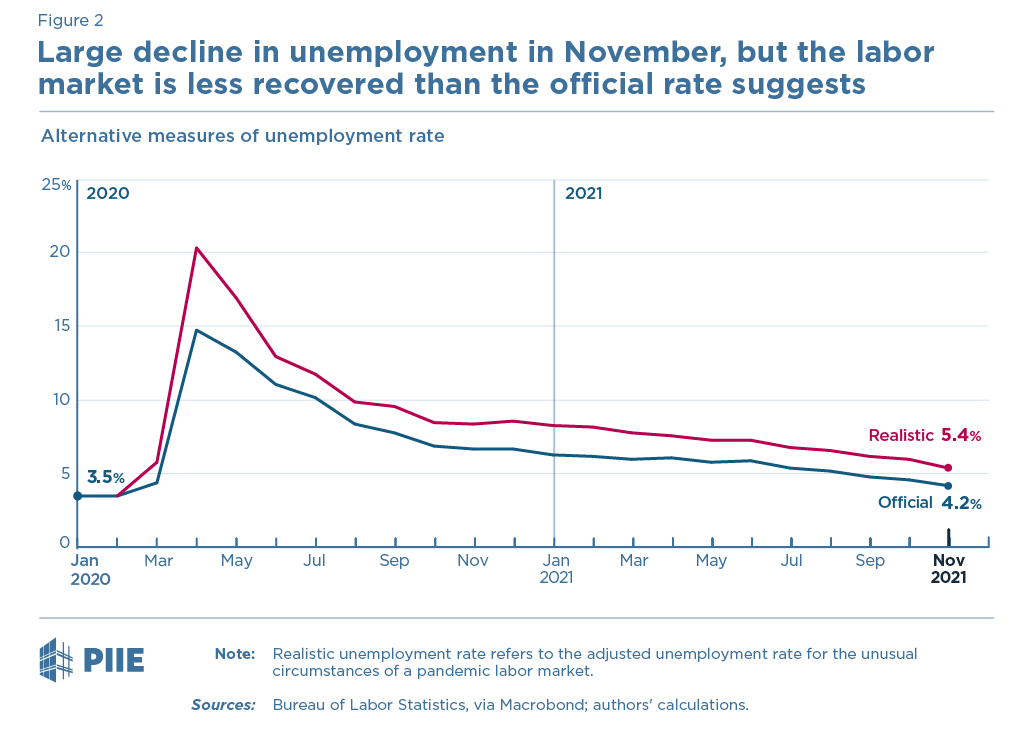 Job Growth Has Been Consistent with Expectations This Year

Job growth this year has been roughly consistent with economic forecasters' expectations this year. We rely on the median forecast from the Survey of Professional Forecasters, which surveys leading economic forecasters every three months. (We make minor assumptions to produce monthly numbers broadly consistent with their reported quarterly and annual values.) Overall, the level of jobs in November 2021 was at or ahead of most forecasts made since the emergence of COVID-19 in 2020, several of which are shown in figure 3. Specifically, the economy added an average of 555,000 jobs per month in the first 11 months of 2021, faster than the 432,000 per month projection published in November 2020 and near the 562,000 per month projection published in May 2021 after the passage of the American Rescue Plan. 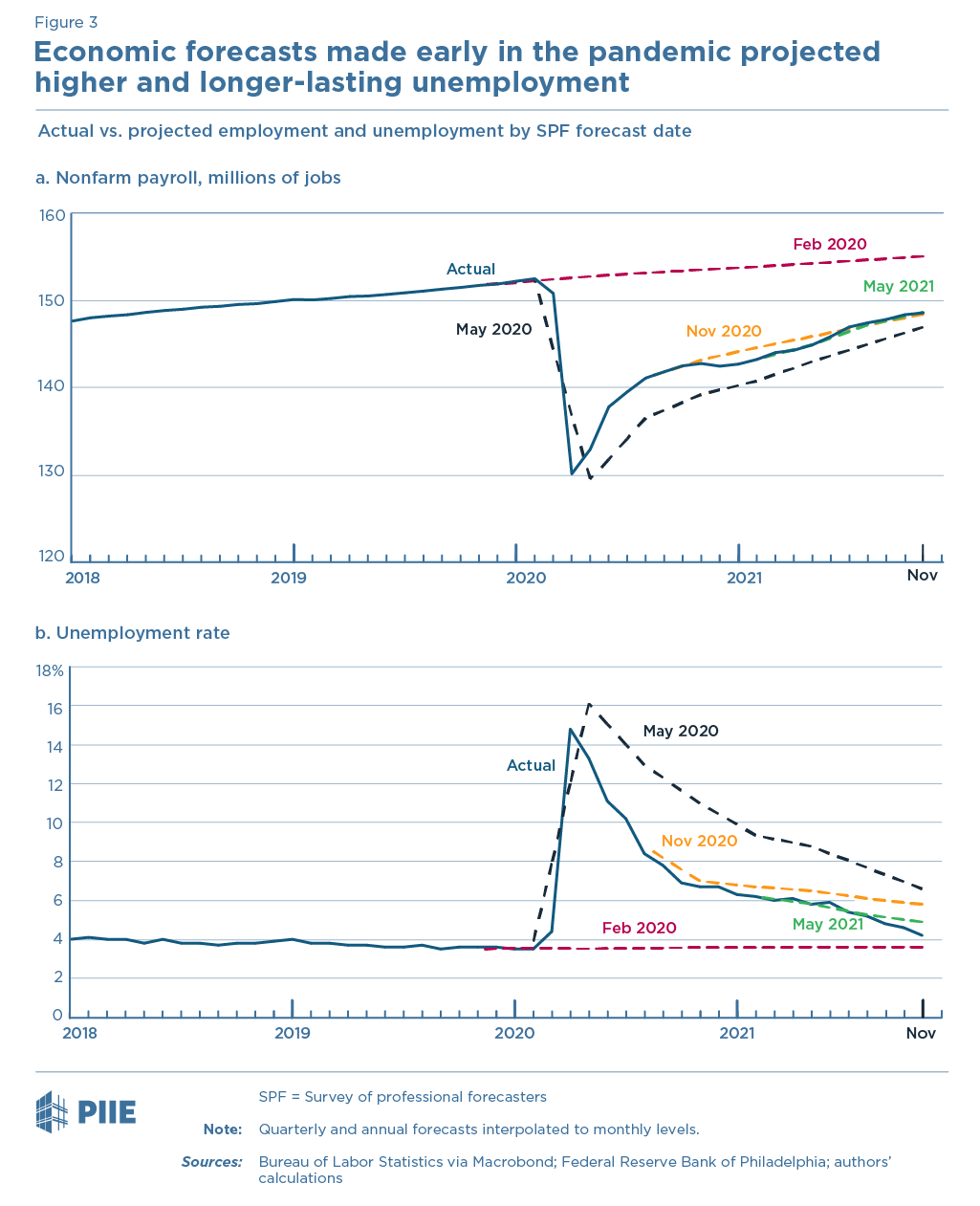 A similar pattern of job growth and/or unemployment rate reduction meeting or outpacing expectations emerges when looking at other forecasters like the Blue Chip consensus or individual forecasters like IHS Markit.

The developments in the job market appear to reflect two offsetting errors made by analysts earlier this year. The first is that the amount of labor that workers are willing to supply at a given wage is lower than expected, with the labor force participation rate lower than expected by forecasters like the Congressional Budget Office and IHS Markit (most others do not publish their labor force participation rate forecasts). The second is that labor demand, the amount of labor that companies want to hire at a given wage, appears to have increased as evidenced by the estimated 11 million job openings in November, at or near a record level. These two errors roughly offset each other with respect to employment forecasts, but both errors have driven wages up much faster than anyone expected.

That leaves 0.7 percentage point, or about half of the total decline in the labor force participation rate, unaccounted for by either changing demographics or elevated unemployment. The relative contributions of these three components are shown in figure 4. 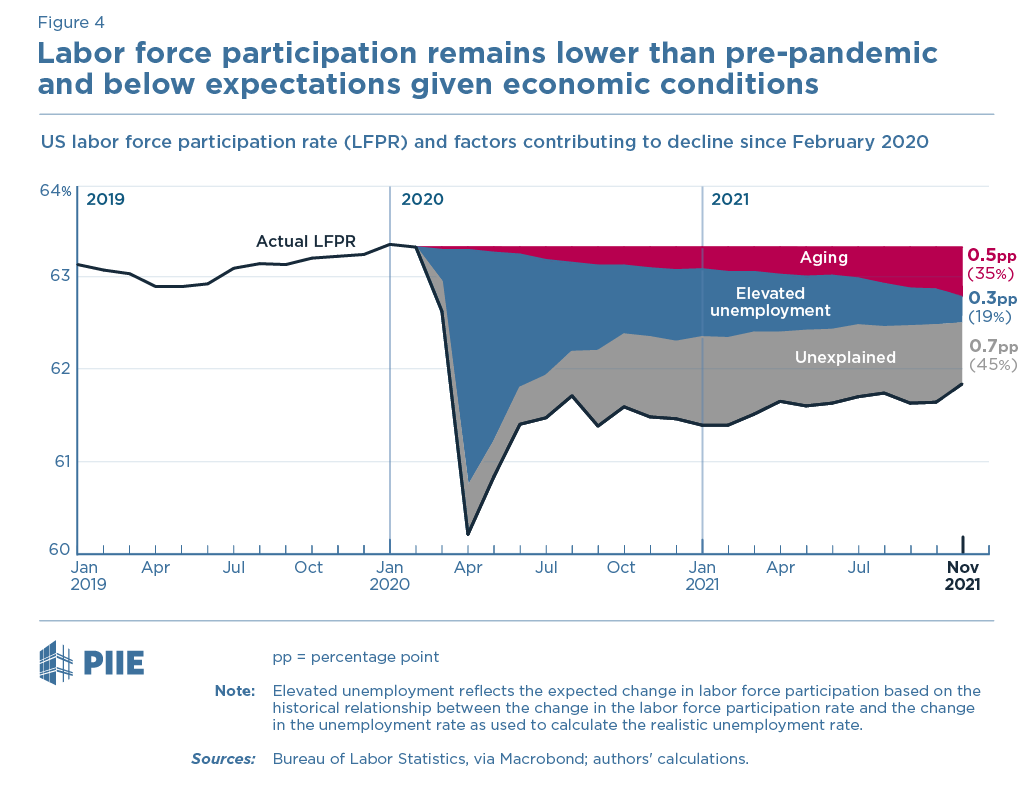 Labor Demand Has Been Surprisingly Strong

Businesses' desire to hire workers has been surprising strong. Job openings recovered strongly even in 2020 but have soared in 2021 to record highs and have stayed near that level. The ratio of unemployed workers to openings was 0.6 in November, the lowest level in the history of the series, which began in 2000.

Different labor market indicators are sending different signals. The prime-age (25-54) nonemployment rate (1 minus the more familiar prime-age employment rate) shows slack in November near its average from 2001 to 2018. The unemployment rate was slightly below its average over that period, while the ratio of unemployed to job openings indicated a very tight labor market and the quits rate (for September, the most recent month available) an even tighter one (figure 5). 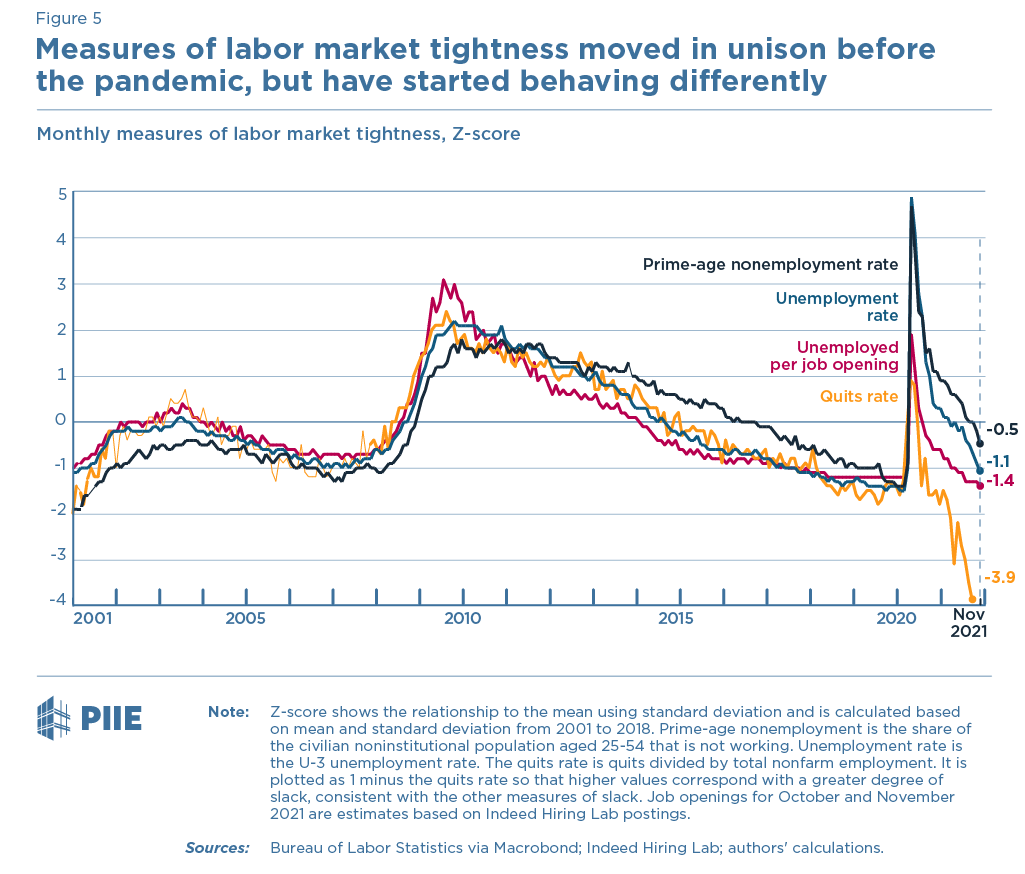 We recently investigated which of these measures was the best predictor of wage growth or inflation based on the experience prior to COVID-19 and concluded that all four measures behave in a broadly similar manner. However, with the unemployed–to–job openings ratio and quits rate most consistent with recent rapid wage and price growth, these two measures should get meaningful weight in assessing future wage and price developments.

Nominal wage growth slowed somewhat in November, up 0.3 percent (3.1 percent at an annual rate). This likely slightly understates true wage growth because of compositional effects as lower-wage workers were added (a rough composition adjustment to reflect the changing industry mix showed wages up 3.8 percent at an annual rate in November). While this is slower than September's particularly fast wage growth, wage growth over the past three months has still been well above the pace prior to the pandemic.

As shown in figure 6, which combines the Employment Cost Index (not seriously distorted by composition effects but only available through September) with average hourly earnings (more timely but sensitive to composition effects), strong nominal wage growth has meant that wages are well above their pre-pandemic trend. 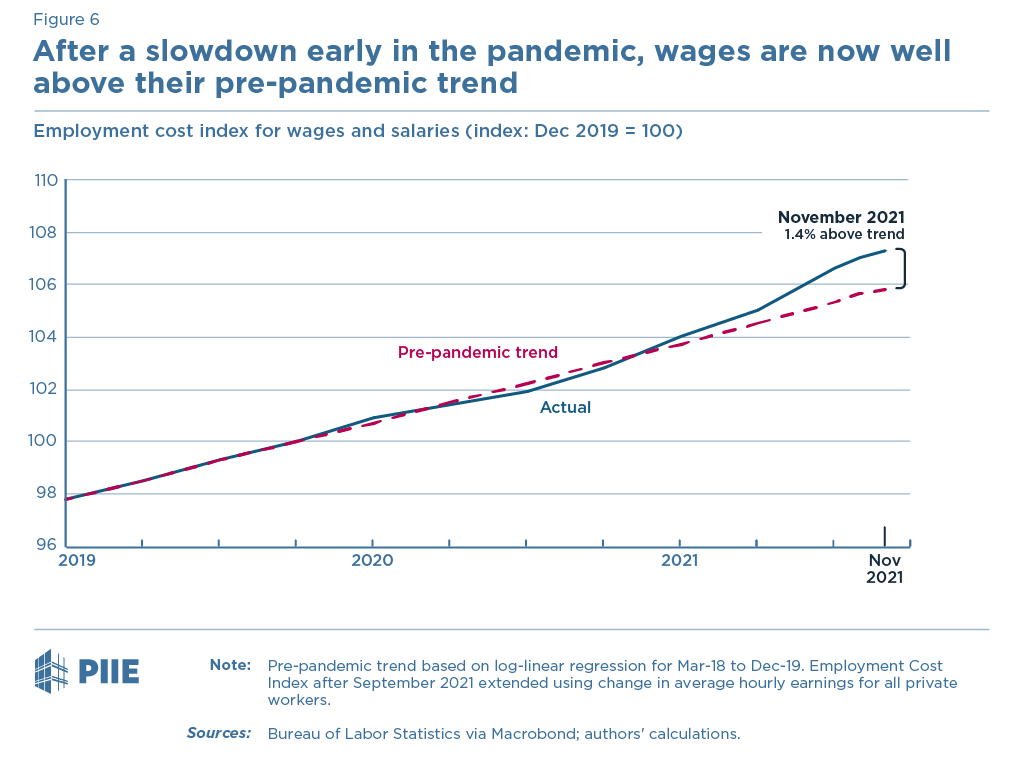 On average, however, inflation has outpaced these nominal wage gains so that real wages have fallen both relative to their pre-COVID level and especially relative to pre-COVID trends (through October; there is not yet inflation data for November).

While the pace of job growth slowed in November, other measures of the labor market showed meaningful improvement. The economy should be able to create jobs at a faster pace if other aspects of labor markets were following their usual patterns, including a higher exit rate of people from unemployment to employment and labor force participation rates rising as the unemployment rate fell.

More time should help with the recovery of millions of jobs, but it remains uncertain whether it will bring back all 5 million missing jobs or just a subset of them and how long this process will take. The two biggest wildcards are the desire of workers to find jobs and how it, along with labor demand, will interact with the continued spread of the Delta variant and the rise of the Omicron variant.

Fiscal policy will be expansionary over the coming year, albeit less expansionary than before, as an additional more than $500 billion from the American Rescue Plan is expected to spend out this fiscal year and Build Back Better may add more. The stance of monetary policy likely will and should remain expansionary over the next year as well, although it may be less expansionary than it has been recently. Together with time, this should continue to return the economy closer to where it was prior to the pandemic. A big question is whether it can end up in an even better place, with higher productivity and tighter labor markets supporting greater real wage gains than before the pandemic. Time will tell.