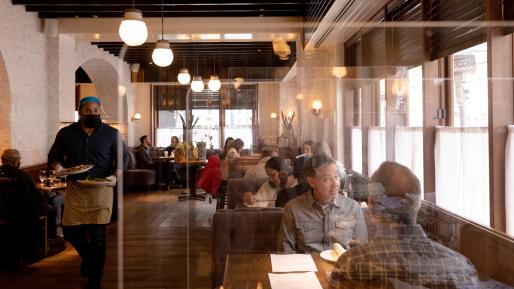 US job market provides hopeful signs against recession and inflation, but other data are worrisome

The US employment report for June continues to show a strong labor market that is consistent with a strong economy with moderating inflationary pressures. Employment is growing robustly, unemployment is low and stable, and nominal wage growth continues to slow, which should ease inflationary pressure. The one discordant note in the June data was a decline in labor force participation.

But if one looks outside of the labor market, other economic data are telling a worrisome story of an economy that could be entering into recession even while the underlying inflation rate remains very high.

There is some possibility that one set of data is being mismeasured now and future revisions will show a more coherent story. But another scenario is more likely. Just like the pandemic recession did not follow any of the usual rules, the recovery is also not following the usual rules either. Without past experience to guide us, the economic outlook is very uncertain.

The employment report strongly suggests that the economy was not in recession in the first half of 2022. At the same time, however, it provides only limited reassurance about the future because previous recessions were not always evident in the employment data several months prior to the peak. The report does, however, provide some reassurance about inflation. Nominal wages appear to be growing at about a 4.5 percent annual rate. Based on historical trends in productivity and the relationship between nominal wages and inflation, this appears consistent with about a 3.5 percent underlying inflation rate. This is below the roughly 6 percent pace of recent CPI growth, excluding the volatile contributors to price growth, and well below the 10 percent annualized pace for the headline CPI so far this year.

The pace of employment growth remains strong while employment is rising

The economy added 372,000 jobs in June (figure 1). While this is a substantial slowdown from the pace earlier this year, job growth remains very strong compared with more normal periods and especially compared to the roughly 50,000 jobs per month needed to maintain constant age-adjusted employment. 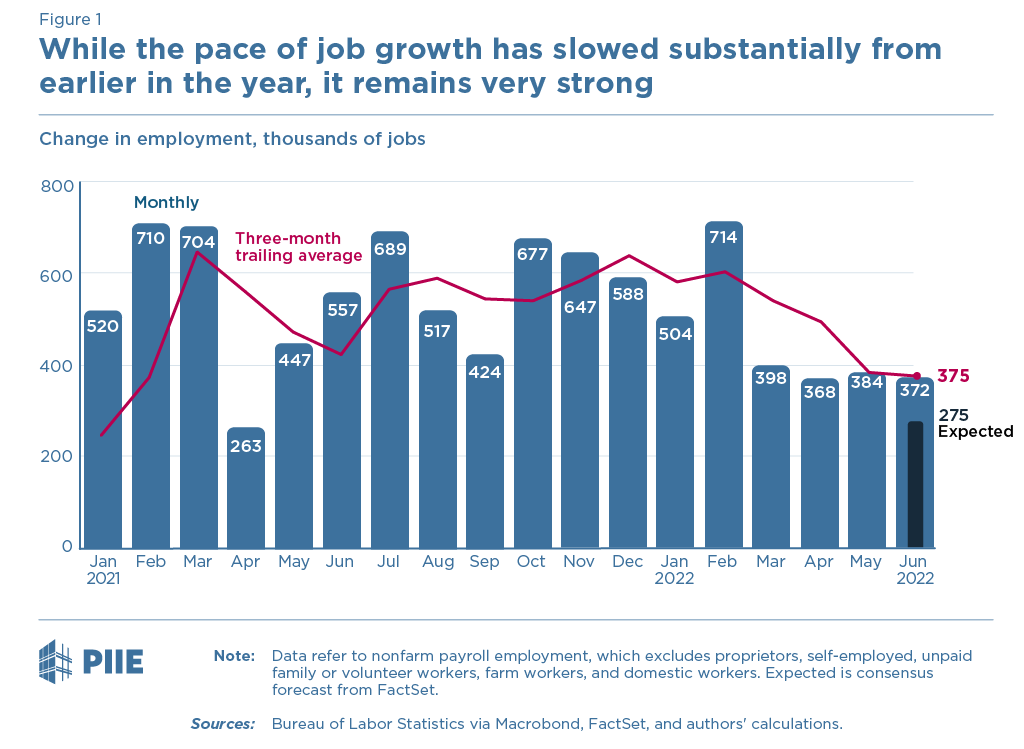 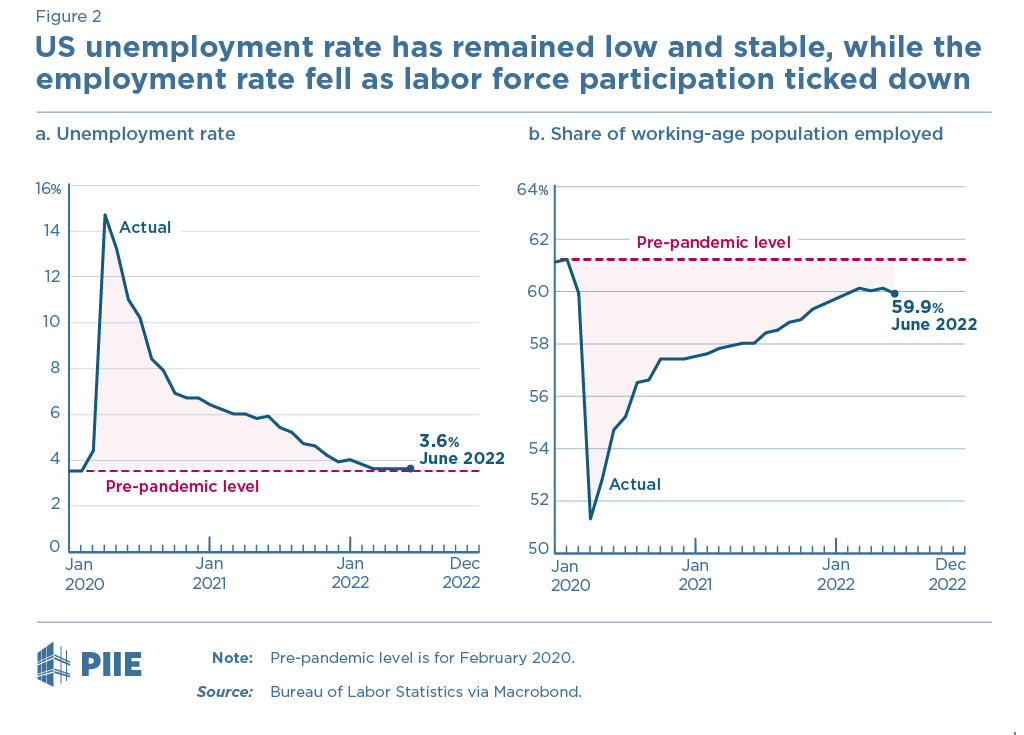 The pace of nominal wage growth is slowing

Overall, labor markets appear to be very tight. The unemployment rate is relatively low, there are about 1.9 job openings for every unemployed worker, and quits remain near record levels—and are much higher than any value recorded before the pandemic.

Nevertheless, nominal wage growth continues to moderate. In the second half of 2021, nominal average hourly earnings adjusted for industry-level composition effects grew at a 6.0 percent annual rate. In the last three months, they grew at an 4.1 percent annual rate, reflecting a gradual but mostly steady slowdown in average hourly earnings growth.

There are a few possibilities for why wage growth has slowed. The most likely is that some of the nominal wage growth in 2021 was a one-time phenomenon reflecting resorting of jobs as the economy was emerging from the pandemic, increased compensating differentials, and the one-time effect of public supports on the bargaining power of labor. As the economy normalizes, nominal wage growth remains relatively high because of the tight labor markets (the 4.1 percent annual rate in the last three months is above the 3.1 percent annual rate in the two years before the pandemic) but not nearly as high as in 2021.

It is also possible that the slowdown in average hourly earnings reflects noise in the data (including the effects of slowing in certain industries like retail trade and transportation and warehousing), a residual compositional issue, or a transitory slowing of wage growth. Some other measures of nominal wage growth have not shown as large a slowdown as average hourly earnings. Average hourly earnings are the only data currently available for the entire second quarter. As more data, including the Employment Cost Index, becomes available later this month and next month it will be possible to better assess this possibility. Wage growth could also pick up again. 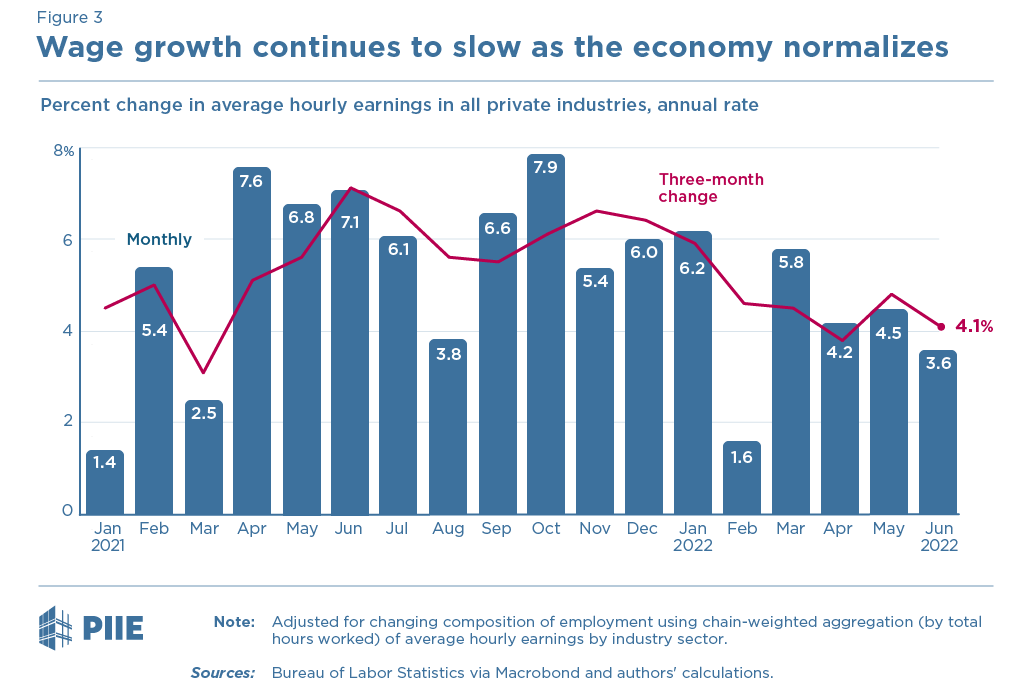 This does not look like an economy in recession

The National Bureau of Economic Research's (NBER) Business Cycle Dating Committee, the organization which officially determines the dates of US recessions, defines a recession as "…a significant decline in economic activity that is spread across the economy and that lasts more than a few months." The committee looks at several different indicators when identifying the start of recessions including "real personal income less transfers (PILT), nonfarm payroll employment, real personal consumption expenditures, wholesale-retail sales adjusted for price changes, employment as measured by the household survey, and industrial production" and does not follow any fixed rules, so it can take several months or longer before a recession is declared.

Most recessions are characterized by strong co-movements between different aspects of economic performance. One of the most important indicators of a recession is the labor market. It is so important because it is measured in a timely and accurate manner and is directly related to how much an economy can produce, and because of its inherent importance for people that rely on the labor market for their income.

While it takes time for the NBER to officially identify the beginning of a recession, certain labor market measures have made it possible to identify recessions in close to real-time, at least historically. One very reliable indicator about whether the economy is currently in recession is the Sahm Rule. The rule indicates recession when the three-month average of the unemployment rate exceeds its minimum value over the prior 12 months by at least 0.50 percentage point. Right now, with the unemployment rate tied for its lowest point over the past year, the economy is nowhere near the Sahm Rule triggering as shown in figure 4. Historically, this has corresponded to only an 8 percent risk of recession within the next 6 months and a 20 percent risk in the next 12 months—although a range of other data suggests that recession risks are currently much higher than just this one indicator would suggest. 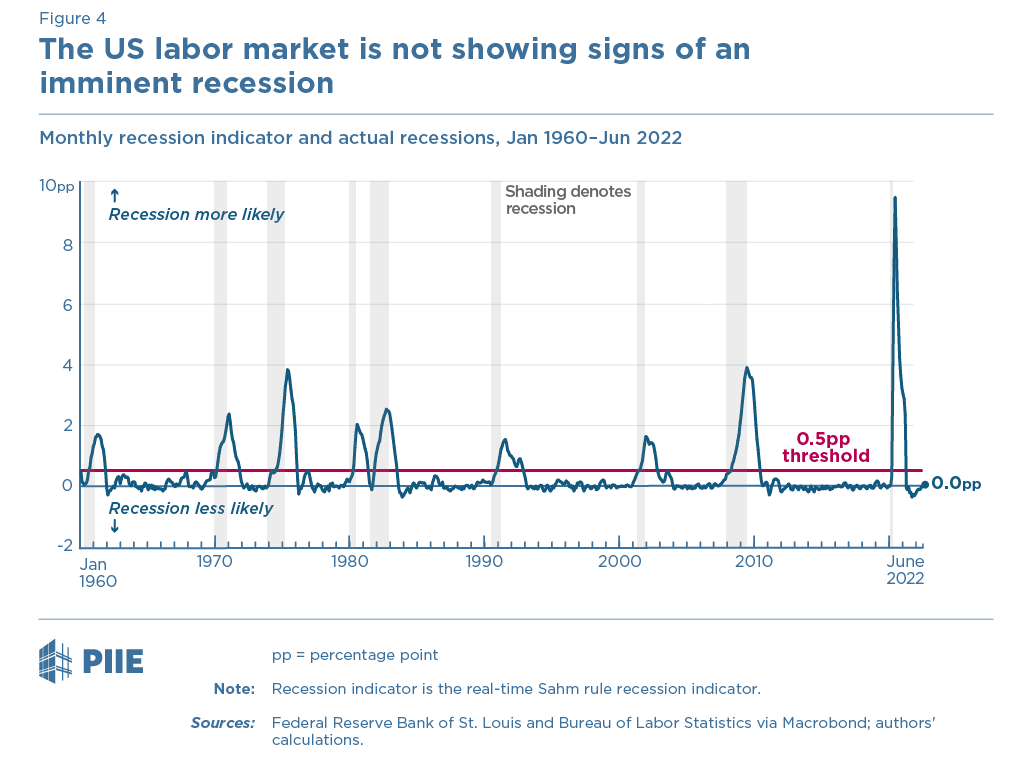 Jobs are also continuing to grow strongly. Over the last six months jobs have grown 1.8 percent (3.7 percent at an annual rate), for an average of 457,000 per month. This is about double or more the pace of job growth in the six months before the last six recessions. 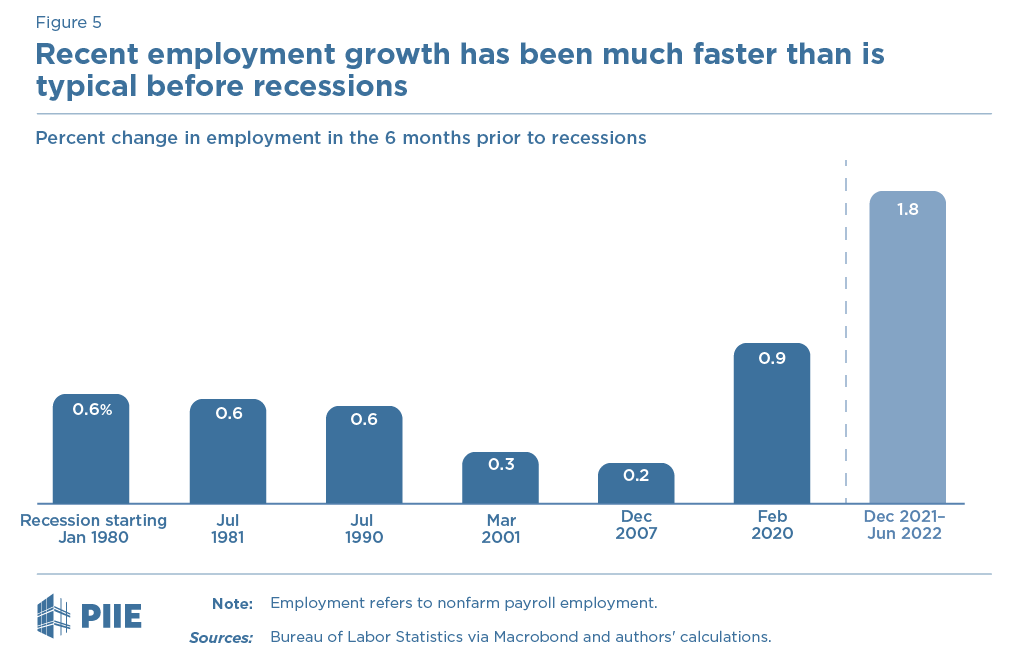 One concern with using job growth to "nowcast" a current or imminent recession is that these estimates will be revised (revisions to the unemployment rate, which is solely survey-based, only reflect updated seasonal factors and are typically minor). Specifically, to estimate job growth, the Bureau of Labor Statistics (BLS) supplements the information reported by employers with a model-based estimate of the number of new businesses that were created and destroyed. Since BLS's model does not know when the economy is at a turning point, it will tend to overestimate jobs when the economy is turning down and underestimate jobs when it is turning up. That means that subsequent revisions, which incorporate administrative data like tax reports, will tend to be negative. For example, it was originally estimated that the economy lost 159,000 jobs in September 2008, but the most recent estimate is that the economy actually lost 460,000 jobs that month.

In the five recessions prior to the pandemic recession, the average revision to total job growth in the six months leading up to the recession was -0.2 percentage points, or the equivalent of about 50,000 jobs per month now. As shown in figure 6, even if the recent jobs numbers are eventually revised down, they are still very likely to be much higher than is typical before a recession. 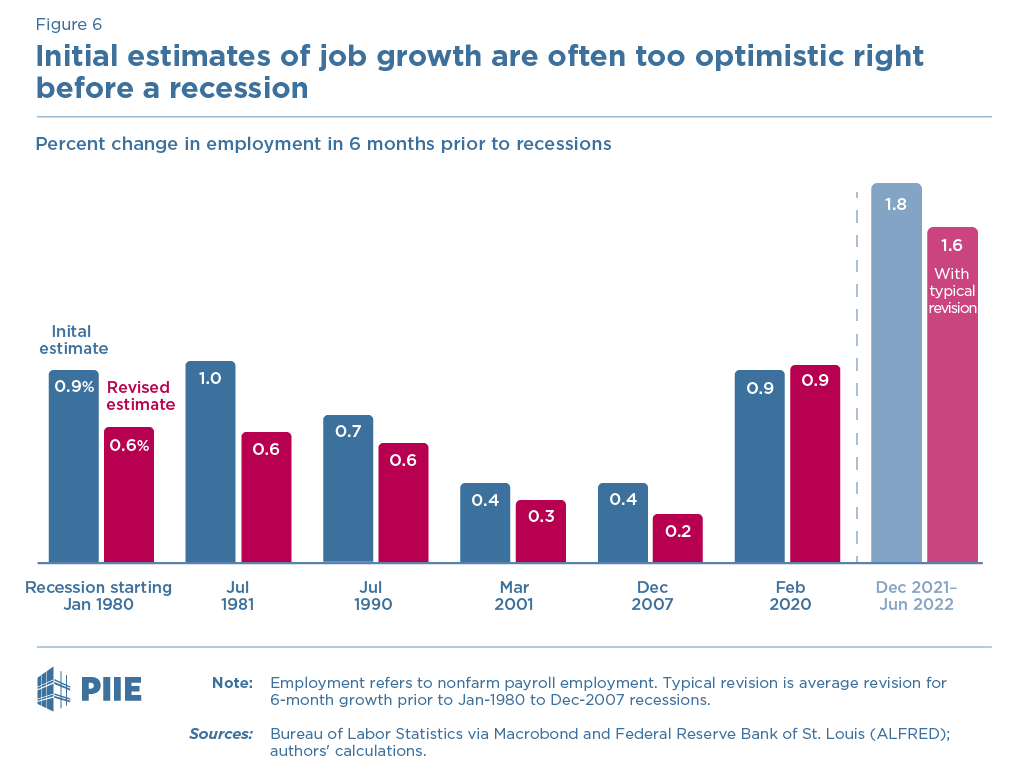 The fact that a "nowcast" provides little support for the view that the economy is currently in a recession does not mean it will not go into a recession soon. The Sahm Rule, for example, while very good at identifying recessions that have already started, is not highly predictive of recessions that start in the near future. In five of the last six recessions, the unemployment rate was very stable, or even falling, in the 5 months prior to the business cycle peak. Moreover, job growth can turn very rapidly, as shown in figure 7. In each of the past six recessions, the economy shed more jobs in the first six months of the recession than it gained in the six months leading up to the business cycle peak. 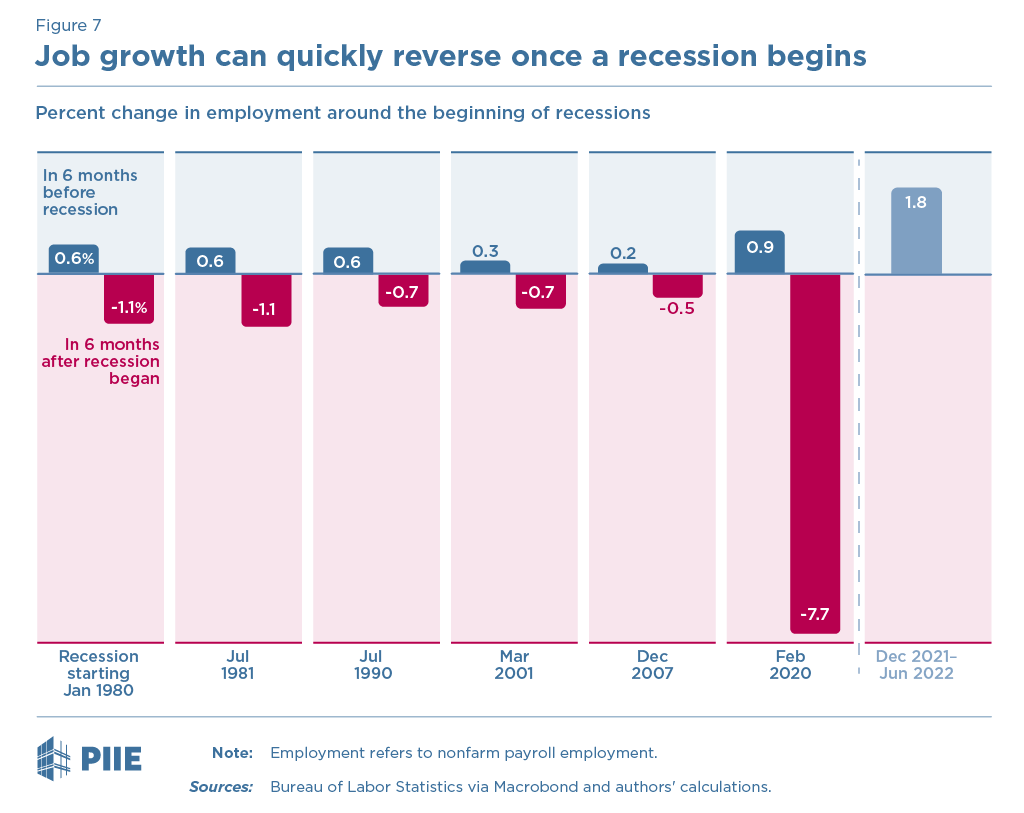 Output-per-hour is falling at a historic pace in 2022, although this could partially reflect measurement error

Even as employment continues to rise, GDP shrank in the first quarter of this year and is expected to shrink again in the second quarter. The disconnect between falling GDP and rising employment is largely reconciled by the dramatic fall in output-per-hour, also known as productivity. Based on the latest tracking, it is very plausible that productivity growth has fallen at about a 6 percent annual rate over the last two quarters, which would be about twice as fast as the largest previous decline in productivity growth. This follows very rapid productivity growth as the economy emerged from the pandemic.

Productivity growth is volatile and poorly measured because it is affected by errors in both the numerator (output) and the denominator (hours). In addition, it is not a pure measure of technology because it is affected by changes in work intensity, rising when work intensity is increasing (e.g., if demand increases a lot before employment increases), and falling when work intensity decreases. It is too soon to use these aggregate data to assess questions like whether work-from-home is increasing or reducing the productivity of employees.

What it does show, however, is that employers are still hiring. One possibility is that they need additional workers because it was only possible to sustain the increased work intensity temporarily. Another possibility is that employers are unsure about their ability to fill job openings going forward, so they are hoarding labor now. Either way, it is a very unusual disconnect between the trajectory of output and the trajectory of employment. 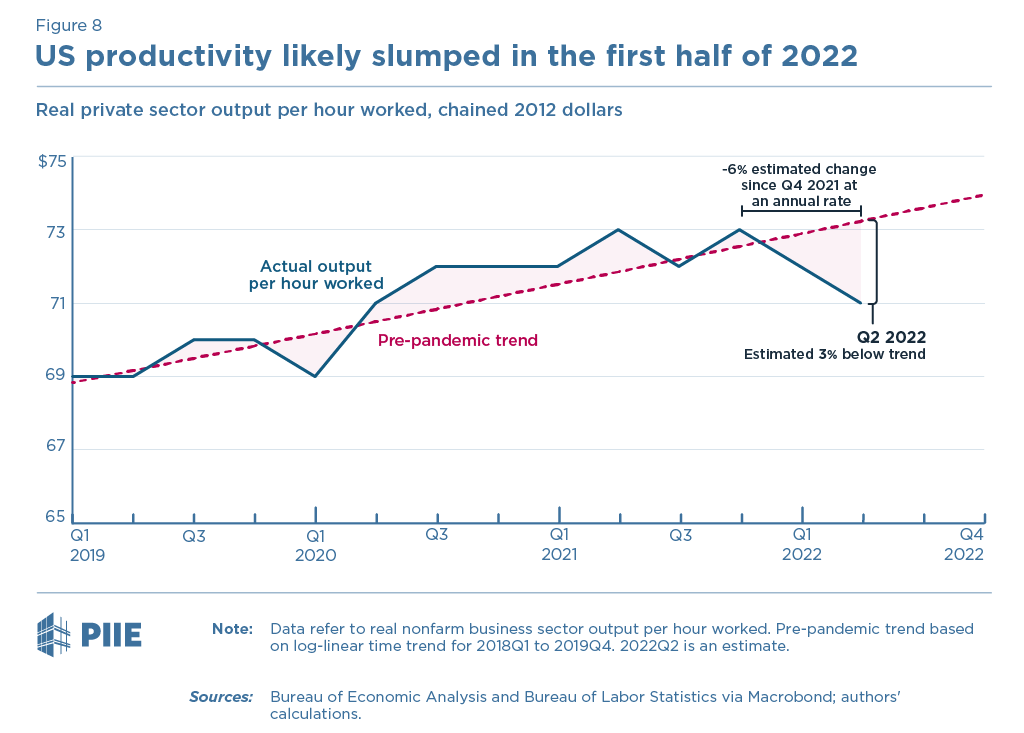 The final possibility, however, is that output is stronger than the official data suggest—and thus productivity growth has been less negative than those data indicate. Gross Domestic Income (GDI), an alternative measure of the size of the economy that should be identical to the more widely reported Gross Domestic Product (GDP) except for measurement error, has grown much more quickly than GDP. Some evidence suggests that GDP has been undermeasured, particularly in the area of business investment. 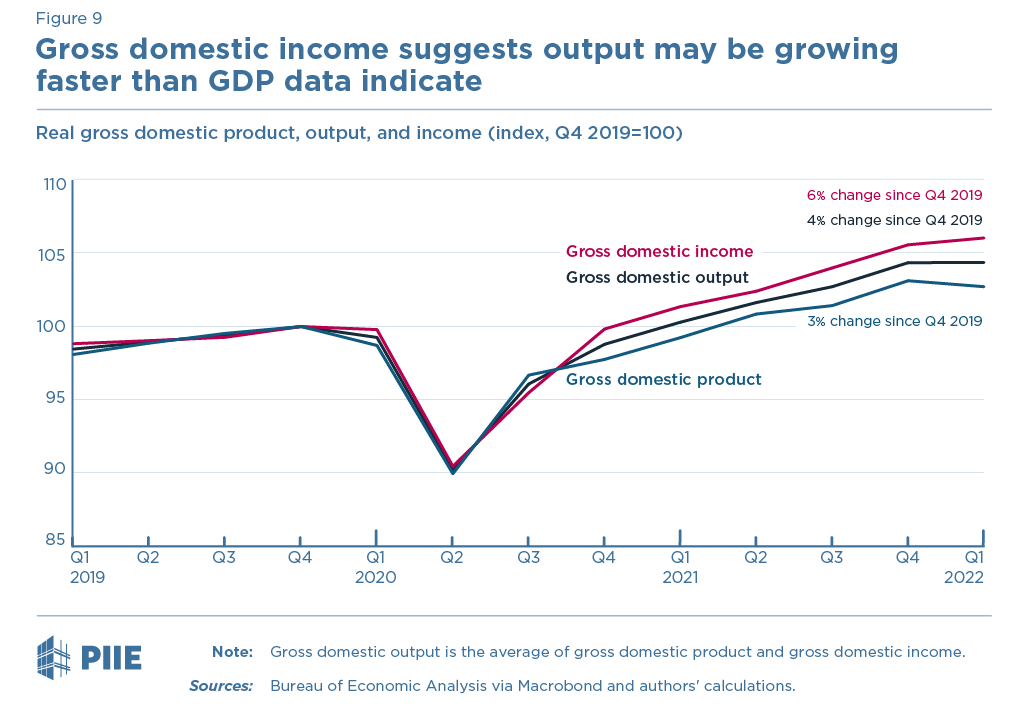 Everything about the economy over the last two and a half years has been extremely unusual and it continues to be. The disconnect between falling output and rising employment in the data for the first half of 2022 is larger than anything that has been recorded in the post-World War II period. It is possible that data revisions will ultimately reconcile these disparate phenomena. It is also possible that the discrepancy is merely one of timing. In this case, either output will start picking up as the economy averts recession or employment will start falling as the economy slips into recession.

The US labor market is not showing signs of a recession