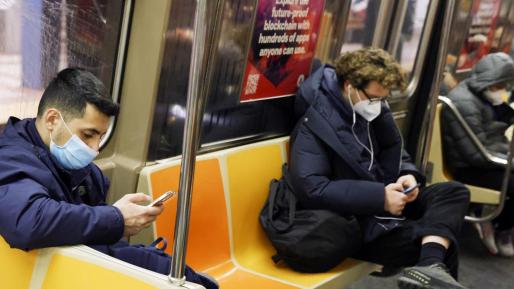 The economy added 678,000 jobs in February, an increase from the pandemic-affected January numbers and consistent with the rapid pace of job creation in the second half of 2021. The unemployment rate resumed its rapid decline, falling to 3.8 percent as labor force participation increased. Wage growth in February was, however, nearly flat after 10 straight months of strong nominal wage growth. It is possible this will turn out to reflect noisy data. Over the last three months (adjusted for industry composition), average hourly earnings have grown at a 4.2 percent at an annual rate, the slowest pace since March 2021.

Overall, the economy is still 3.5 million jobs and 1.4 million workers short relative to pre-pandemic projections (adjusted for lower than expected population growth), as labor supply continues to fall short of labor demand. The continued shift from a pandemic to a manageable endemic disease, along with monetary and fiscal policy that remains expansionary, should help continue to close the gap in 2022.

In contrast to expectations for a slight slowdown in job growth, payrolls rose 678,000 in February, as shown in figure 1. The February reading and additional upward revisions to payroll employment gains in December (+78,000) and January (+14,00) mean that employment growth has remained very strong. 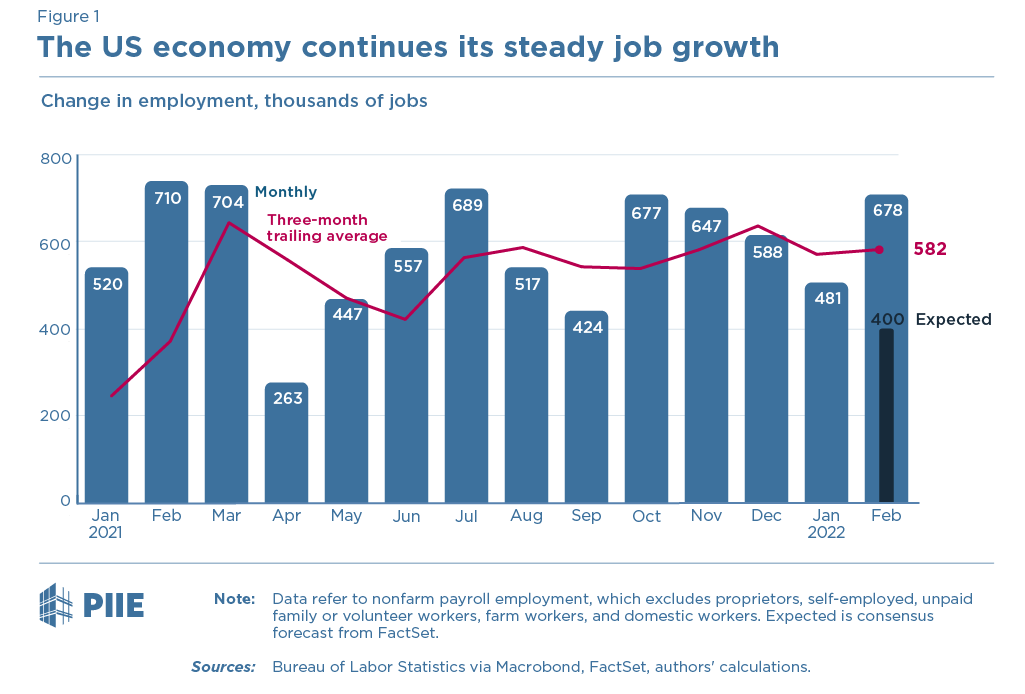 The unemployment rate fell in February and is now only 0.3 percentage point higher than it was prior to the pandemic (figure 2a). The number of workers working part-time for economic reasons increased in February driving up a broader measure of labor market underutilization, U-6, which includes the involuntary unemployed. This is the first time U-6 has increased since April 2020. 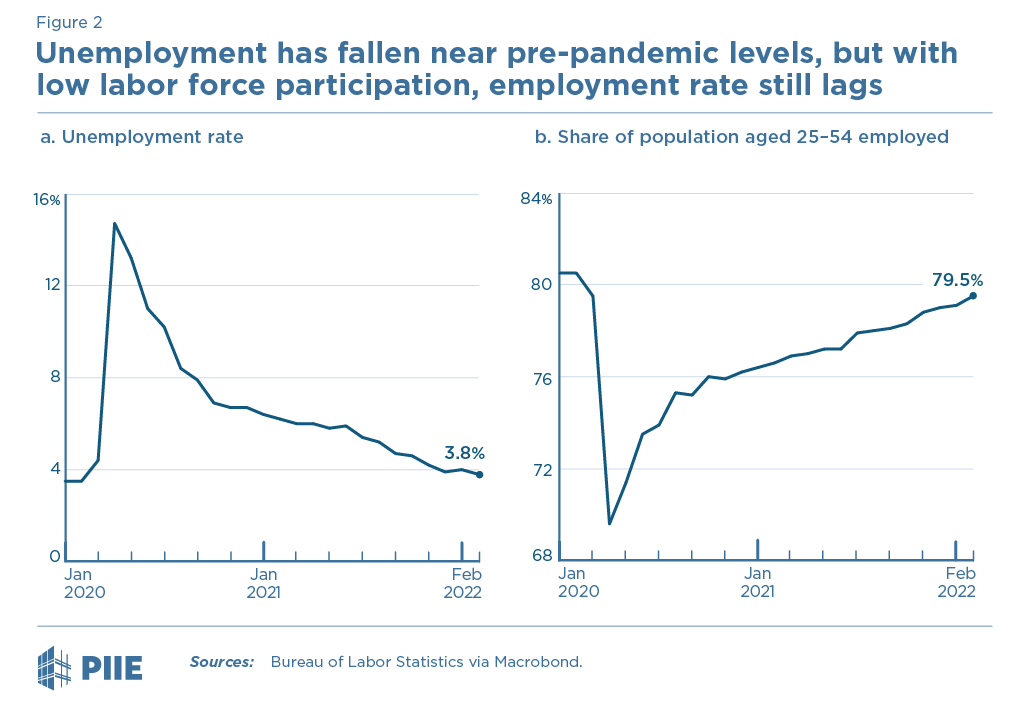 The labor market moved closer to normality in February, but the economy still remains 3.5 million jobs short of pre-pandemic projections adjusted for slower than expected population growth, as shown in figure 3 (or 4.2 million jobs short of the original pre-pandemic projection). We use the Congressional Budget Office's (CBO) January 2020 forecast for a projection of where jobs might plausibly have been absent the emergence of COVID-19 and the economic response it engendered. The civilian noninstitutional population ages 16 and older in January 2022 was 1.3 million (or 0.5 percent) lower than CBO had originally forecast, with excess mortality and reduced immigration both large factors.

Looking at the household survey's measure of the number of workers employed shows a considerably smaller gap than the employer survey's measure of the total number of jobs. In total, 1.4 million fewer people were employed in February 2022 than had been expected pre-COVID-19 (again adjusted for slower than expected population growth) as employment growth (the number of people surveyed who said they had jobs) outpaced job growth (the number of employers reporting a job) over the last year. Two of the reasons the employment shortfall is smaller than the jobs shortfall is that, since February 2020, multiple job holders have fallen by 0.6 million (this results in fewer jobs without any reduction in employment) and self-employment has risen by 0.2 million (this counts as employment but not as a job). Other issues, including different CBO forecast paths and other definitional and measurement differences, account for the remainder of the difference between the jobs and employment shortfalls. 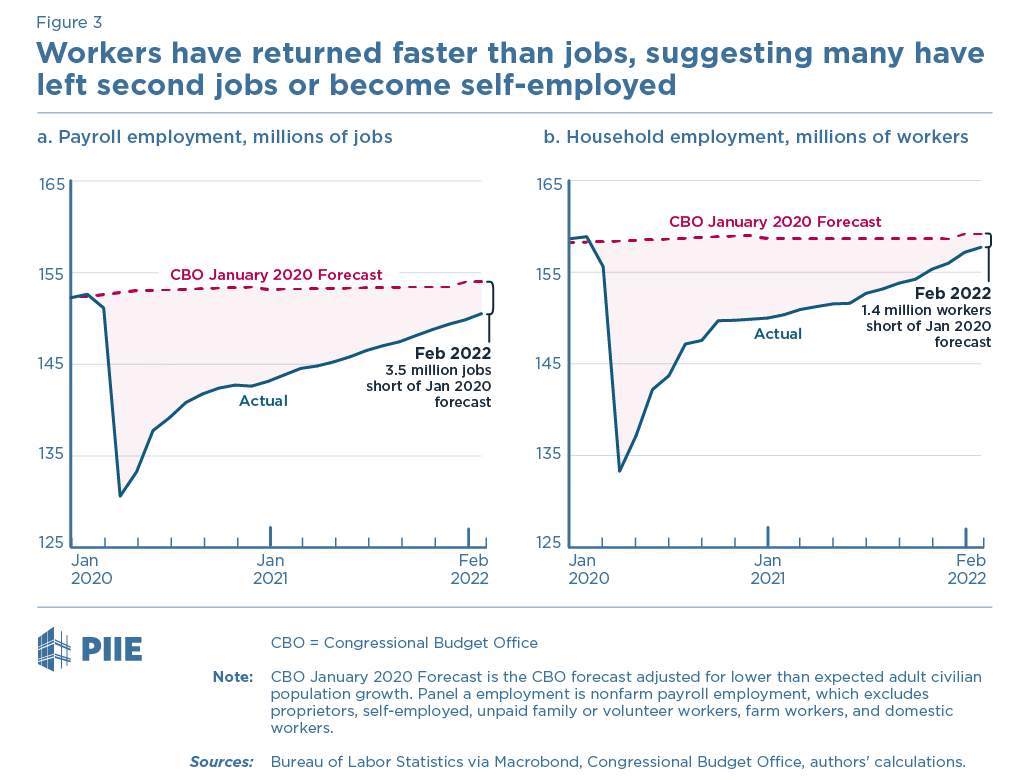 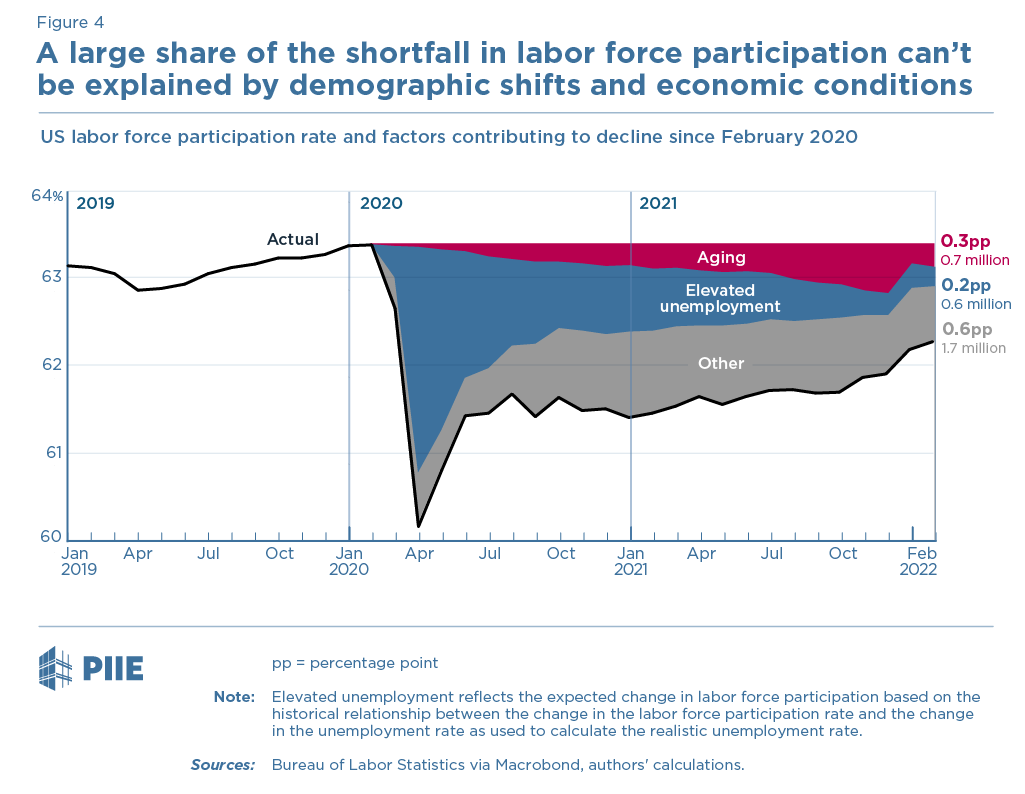 Overall, of the 0.9 percentage point decline in the labor force participation rate that is not associated with the changing demographic structure of the workforce (both the “elevated unemployment” and “other” categories in figure 4), about twice as much of the decline has come from women as from men. Labor force participation rates are roughly as expected for younger workers, but there are similar contributions to declining participation from the 25-54 and 55+ age groups. Much of the difference between men and women is the result of a larger contribution from women aged 25-54, with the contributions for men and women similar among those 55 and older. (Note the breakdown of contributions can reflect volatile monthly data; the male-female contributions were roughly equal over the last few months but changed in February.) 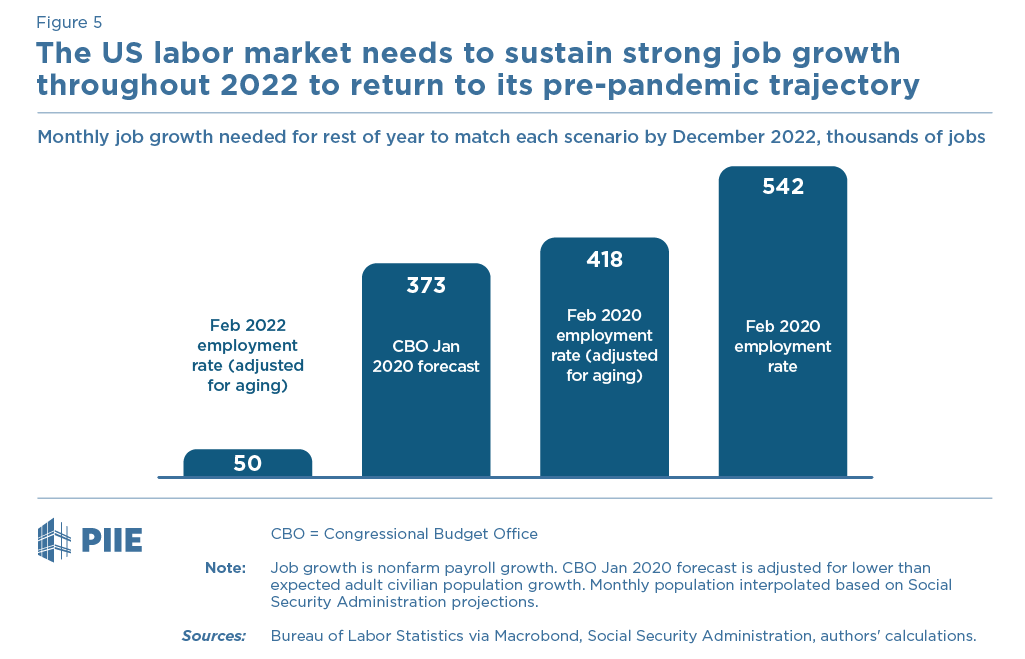 Tight Labor Markets Have Contributed to a Pickup in Wages

Every indicator of labor market slack shows that labor markets are getting tighter. Different indicators still tell a somewhat different story about the degree of slack, but they are generally converging. The prime-age (25-54) employment rate shows slack in February modestly below its average from 2001 to 2018 (a period when the economy was, on average, below full employment). The unemployment rate was somewhat further below its average over that period, as was the ratio of unemployed to job openings, indicating meaningful labor market tightness. The quits rate (for December, the most recent month available) indicated an extremely tight labor market (figure 6). 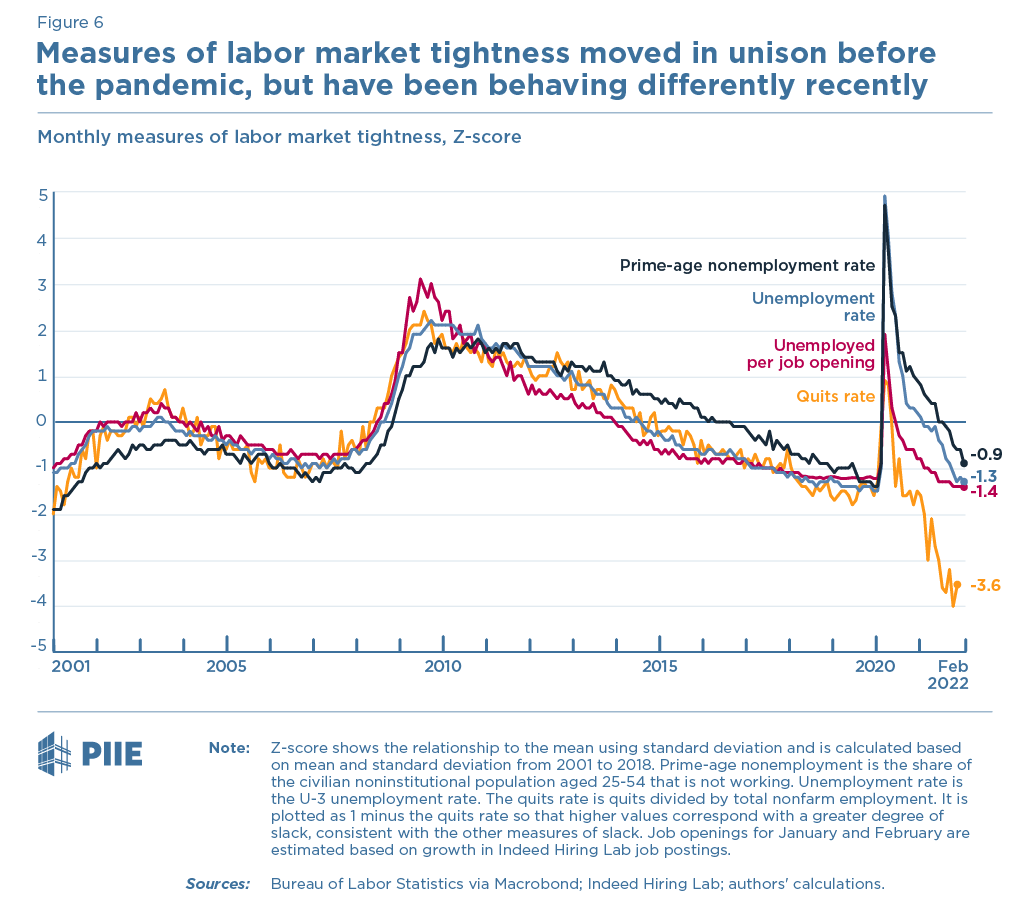 In November, we investigated which of these measures was the best predictor of wage growth or inflation based on the experience prior to COVID-19 and concluded that all four measures behave in a broadly similar manner. However, with the unemployed-to-job openings ratio and quits rate most consistent with recent rapid wage and price growth through much of 2021, these two measures should get meaningful weight in assessing future wage and price developments. 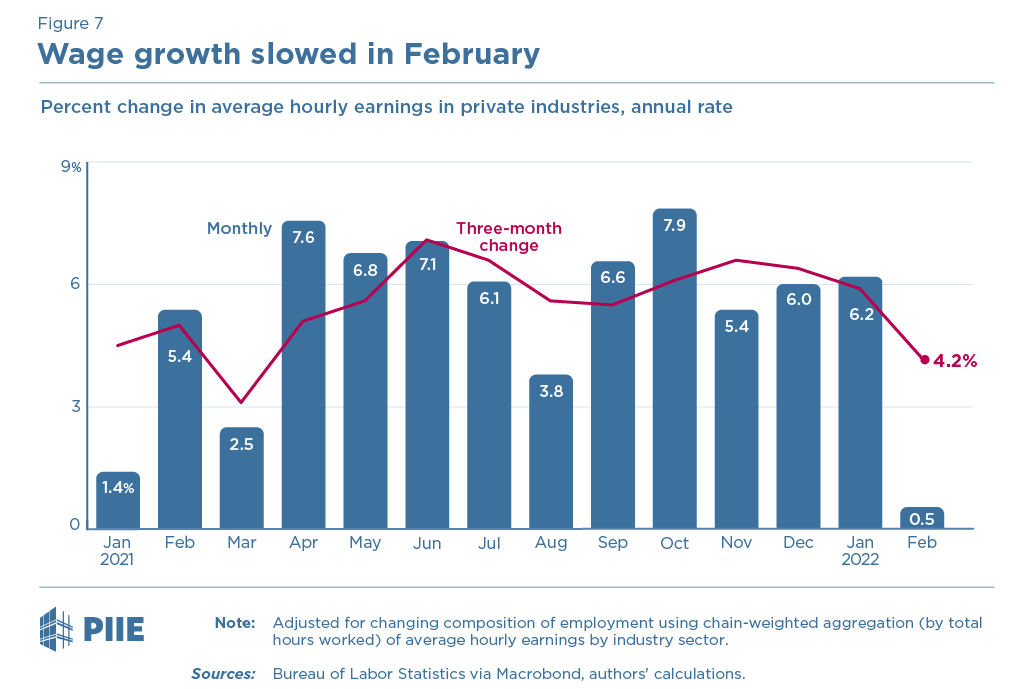 Prior to the pandemic, productivity was growing about 2 percent annually. If nominal wages continue to grow at a roughly 4 percent pace in 2022, their pace over the last three months and what employer surveys report for 2022, that would be consistent with 2 percent inflation (assuming no change in the labor share). If, as is more likely, wage growth is at or above its 5.5 percent pace last year, including upward pressure due to workers' demands for catch-up wage growth, staggered wage setting, and ever tighter labor markets, then inflation would be closer to 4 percent (assuming no change in the labor share). Nominal compensation growth and the trajectory of business mark-ups over cost are two key variables to watch in thinking about inflation in 2022.

US wages stalled in February after months of strong growth