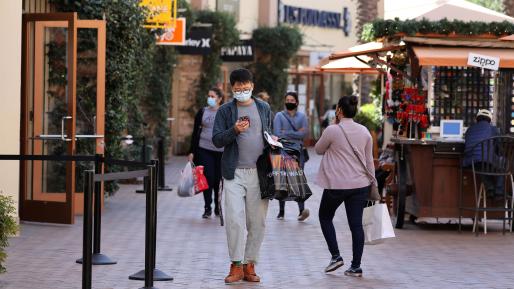 The US economy grew faster than expected in 2021, but the pandemic transformed its composition

US GDP growth accelerated in the fourth quarter, growing at a 6.9 percent annual growth rate, an increase from the pace of growth over the previous four quarters as the economy continues to recover from the effects of the COVID-19 pandemic. GDP growth in the fourth quarter was entirely accounted for by increased inventory investment and increased service spending. Over the four quarters of 2021, real GDP grew 5.5 percent, the fastest pace for any year since 1984.

The economy was likely producing around its economic potential in the fourth quarter. The economy was still 1.4 percent below its pre-pandemic trend. But even absent the pandemic it is unlikely that the economy would have continued to grow as quickly in 2020 and 2021 as it did in the years before then. Prior to the pandemic forecasters generally expected some slowing, as the economy was close to or at maximum employment and thus would be unlikely to continue the same pace of job gains. Moreover, the pandemic itself has likely lowered potential because of increased deaths and reduced immigration, which have resulted in a smaller-than-expected labor force, and low investment, which has resulted in a smaller-than-expected capital stock.

Even though the economy in aggregate was close to where it would have been absent the pandemic and the policy response to it, the composition of the economy was dramatically different. On the supply side, employment was still low (largely because of continued low labor force participation) but this was made up for by higher average hours and higher productivity. On the demand side, final expenditures were skewed towards goods and residential investment and away from services, business fixed investment, inventories, and net exports. The demand side moved towards a more normal composition in the fourth quarter but was still very skewed.

In the fourth quarter of 2021, US real GDP was 1.4 percent below its pre-pandemic trend, as shown in figure 1. It is not necessarily the case, however, that real GDP was 1.4 percent lower than what it would have been absent the pandemic (a negative for GDP) and absent the fiscal and monetary policy response (a positive for GDP). The growth rate in the years prior to COVID-19 was boosted by continued increases in the age-adjusted employment rate as the economy's cyclical position improved. Most forecasters did not expect this improvement to continue at the same pace, instead expecting growth to slow, even absent the pandemic. The pre-pandemic trend assumes that growth would have continued at a 2.3 percent annual rate, while the Congressional Budget Office's (CBO) last pre-COVID-19 forecast was for growth at a 2.0 percent annual rate in 2020 and 2021 (CBO's actual pre-pandemic forecast envisioned the economy being above potential in 2021-Q4). Overall, the economy itself was operating 0.2 percent below CBO's pre-pandemic estimate of potential in 2021-Q4. The events that have occurred during the pandemic have likely lowered potential still further. Business investment fell during the pandemic and remains low. To the extent that this investment is permanently lost, the economy will have less productive capital, permanently reducing output. The cumulative reduction in fixed investment over the course of the pandemic has likely reduced the capital stock by about 0.4 percent. The potential labor force is also likely smaller than it would have been absent the pandemic, as reduced immigration and increased mortality have combined to slow population growth. Combined, these factors have likely shrunk potential output by about 0.7 percent. With this reduction applied to CBO's pre-pandemic estimate of potential, real GDP would have been slightly above its potential level at the end of 2021. These adjustments, however, are approximate; CBO may have been overly pessimistic about potential, and potential is always uncertain. The safest statement is that the economy was plausibly operating close to its potential at the end of 2021, but it is too soon to tell whether the longer-term ramifications of the pandemic will be to increase or reduce overall productivity.

The level of real GDP in the fourth quarter was well above all the major private-sector and official forecasts made roughly a year ago, including by the Congressional Budget Office, Survey of Professional Forecasters, and the Organization for Economic Cooperation and Development, most of which were expecting growth to be about 3 to 4 percent in 2021 as shown in figure 2. Even the most optimistic forecast, from the Federal Reserve, was more than a full percentage point too low. 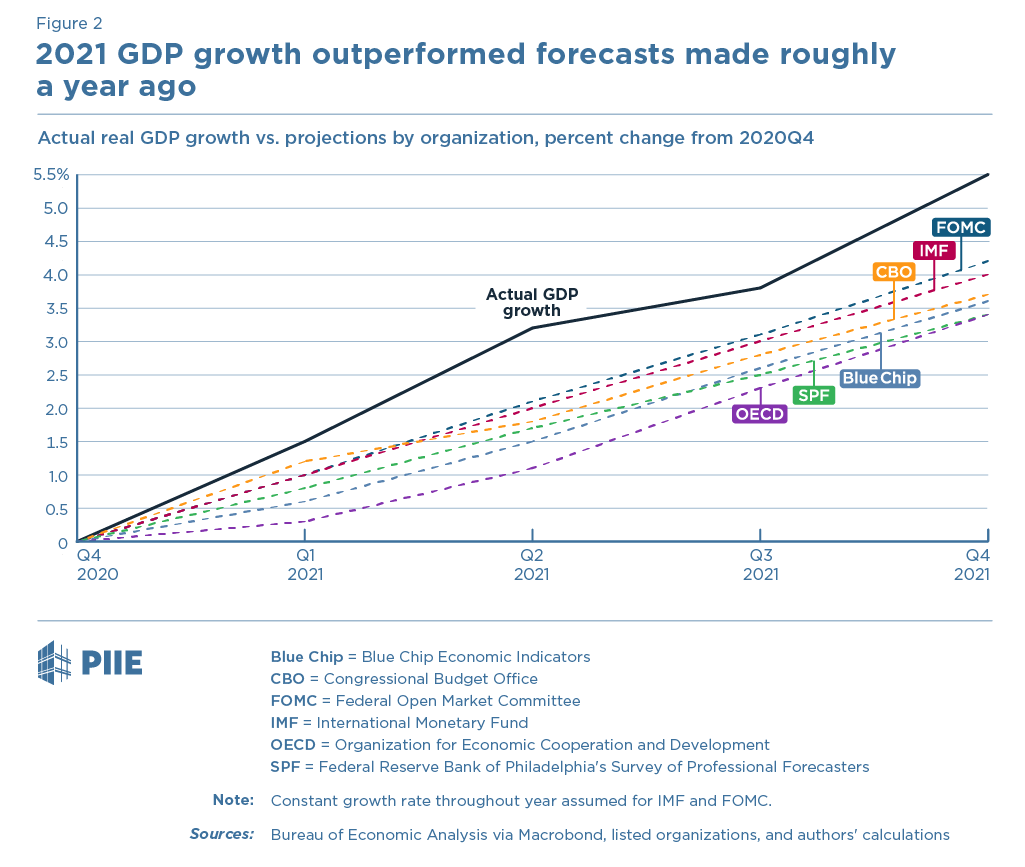 As the economy started to improve rapidly in the first half of 2021, forecasters got more optimistic about growth for the year as a whole. As a result, the level of real GDP in the fourth quarter of 2021 was well below the more optimistic forecasts made over the spring and summer, as shown in figure 3. In August of 2020, forecasters were projecting that the economy would still be considerably smaller in the fourth quarter of 2021 than it was in the fourth quarter of 2019. Since then, forecasters raised their forecasts, as the recovery continued and Congress passed additional fiscal support. By the spring of 2021, after the passage of the American Rescue Plan, forecasters had become much more optimistic, predicting that the economy would have grown at a 2.0 percent annual rate from the end of 2019 to the end of 2021. Forecasters moderated their expectations throughout the late summer and fall, as the pace of growth slowed considerably in the third quarter, and even became slightly too pessimistic by November. 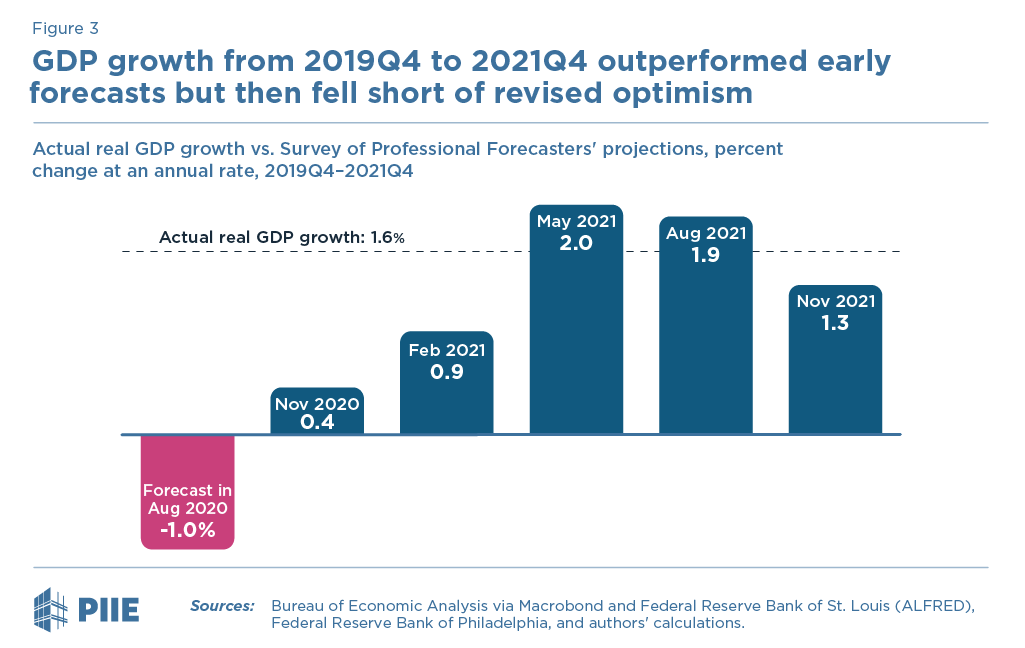 Demand is Almost Back at Pre-pandemic Trend

Final domestic demand includes consumer spending, business investment, homebuilding, and government purchases. Overall, this measure of domestic demand rose only at a 1.9 percent annual rate in the fourth quarter, continuing the slowdown from the third quarter, as much of the production increase went towards increasing inventories. Since the start of the pandemic, however, final domestic demand has been stronger than GDP. In the fourth quarter, it was 0.2 percent above its pre-pandemic trend, adjusted to be consistent with CBO's pre-pandemic estimate of the growth of potential GDP (figure 4). 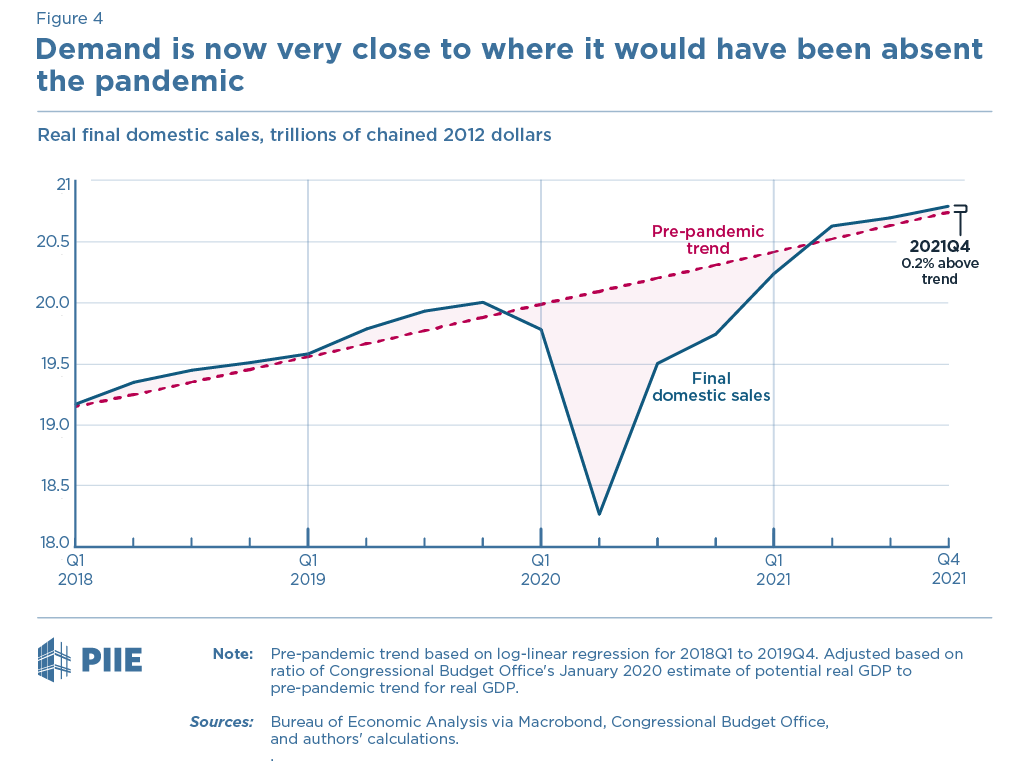 The composition of demand has changed dramatically, as shown in figure 5. The biggest shortfall continues to be in business investment, which is 6 percent short of its adjusted pre-pandemic trend. Consumer spending has fully recovered and is now 1.0 percent above its adjusted trend. Residential investment remains well above trend, while government purchases are slightly below their trend. 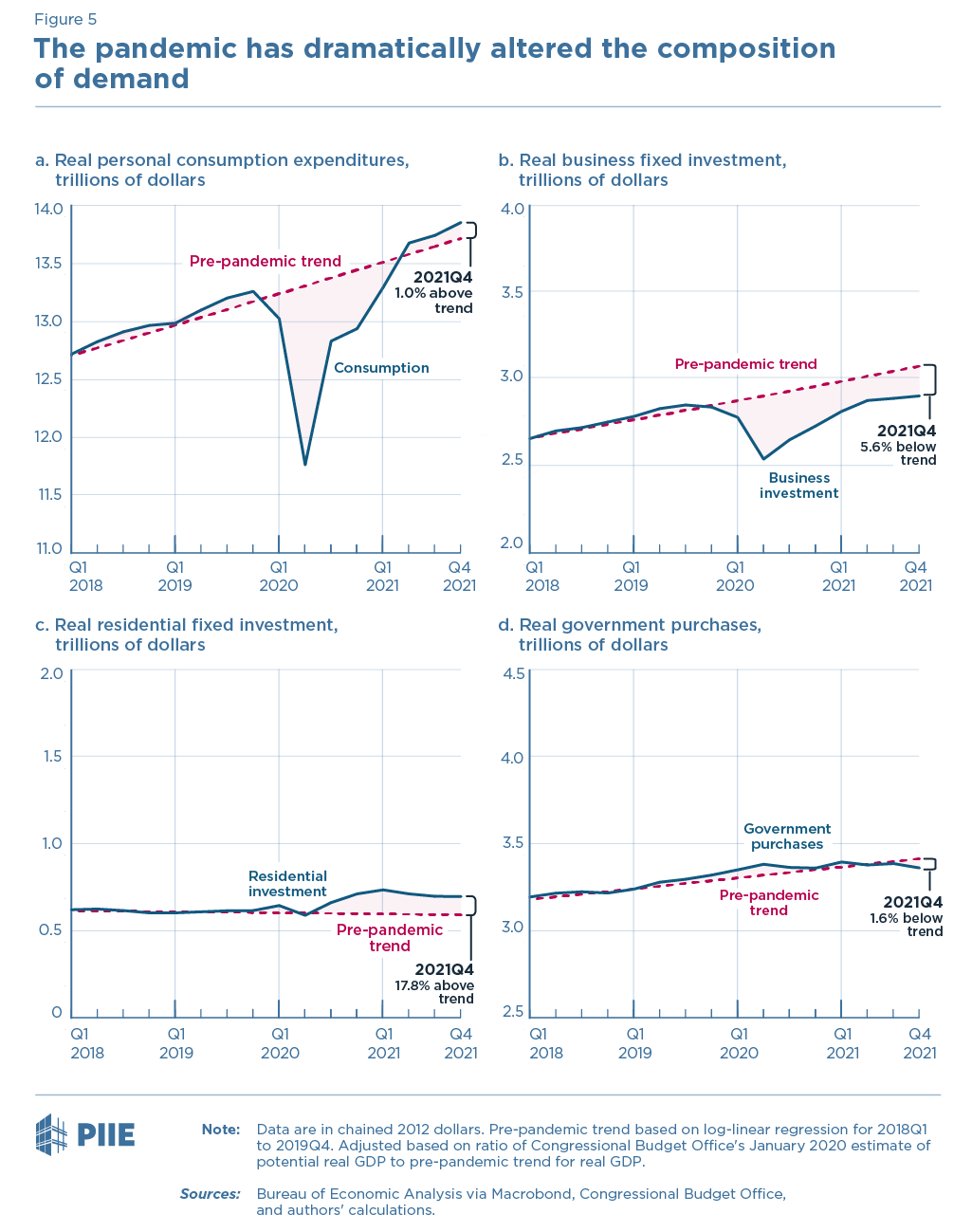 The Biggest Drag on Domestic Demand is Business Investment

Weak supply and weak demand are likely contributing to low business investment. Prices for investment goods accelerated in the fourth quarter, growing at the highest rate in about forty years, while prices for structures grew at the fastest rate on record. This is indicative of supply problems in the sector.

Going forward, business fixed investment could be an important contributor to growth. New orders for nondefense capital goods excluding aircraft have risen very sharply over the last year. Moreover, business investment tends to be negatively correlated with its recent past, with periods of weakness followed by periods of strength and vice versa.

Overall, the cumulative business investment shortfall since the onset of the pandemic totals about $240 billion (in chained 2012 dollars), which is about 0.4 percent of the total capital stock. That decline would be expected to reduce the level of total economy labor productivity—and of potential GDP—by about 0.1 percent.

The Composition of Consumer Spending Has Shifted from Services towards Goods

Spending has been highly elevated on goods and very restrained on services. This pattern of consumer spending reflects the combination of fiscal stimulus and continued pandemic constraints. It is notable that durable goods spending was considerably higher in April, May, June, and July 2021—as the pandemic was receding—than it was in December 2020 and January 2021 when the pandemic was at its height. This suggests that the pattern of consumer spending was not simply a pandemic-induced shift from services to goods.

That goods-services gap continued to narrow in the fourth quarter, as goods spending was roughly flat and services spending rose at a 4.7 percent annual rate. But overall, the pattern is still stark, with goods spending 9 percent above its adjusted pre-pandemic trend (figure 6). The increases in goods spending relative to pre-pandemic trends has been widespread. Based on detailed monthly data available through November, spending was still meaningfully above trend for the majority of durables categories including used cars, appliances, dishes, and flatware, household tools, sporting equipment, recreational vehicles, books, musical instruments, jewelry, and telephone equipment. One notable exception was new motor vehicles where production constraints and price increases appear to have restrained sales keeping them slightly below trend.

Despite the large increase in the fourth quarter, services spending remains 2.7 percent below its adjusted pre-pandemic trend. About half of the shortfall is explained by health spending, which has not returned while low spending on transportation, recreation, and other services has also contributed to the shortfall. 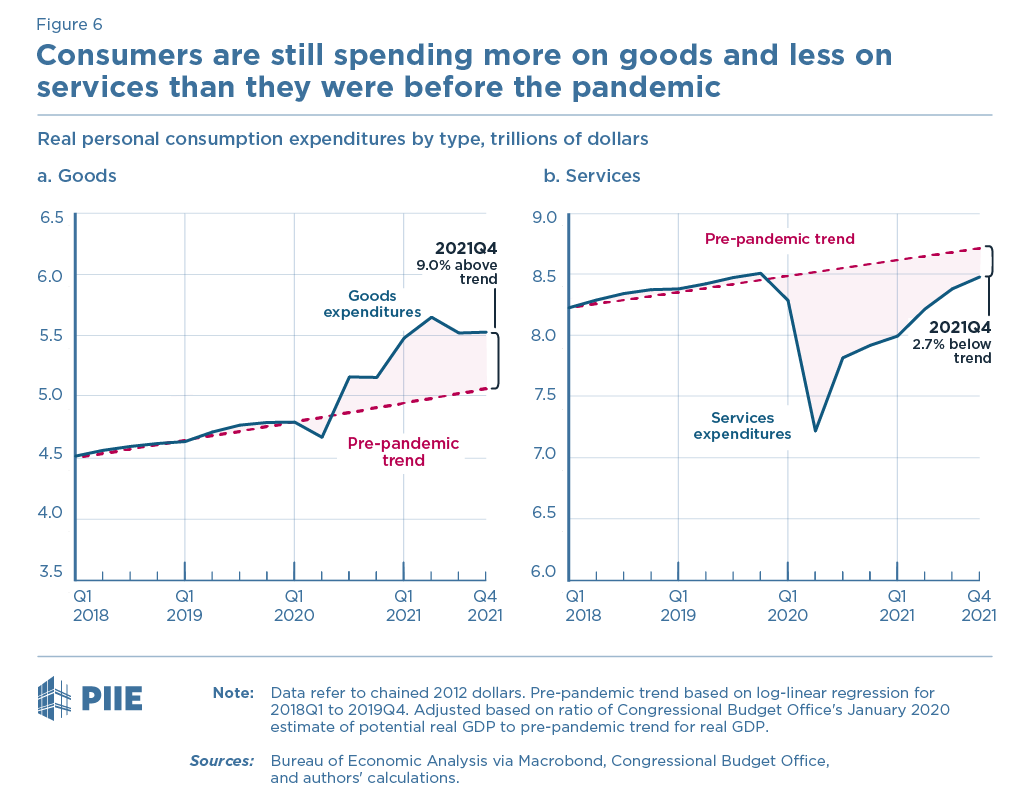 Domestic Production Has Not Been Able to Fully Satisfy Demand

Domestic production could not keep up with very strong demand over the course of the pandemic. As a result, much of the real increase in demand has been satisfied by drawing down inventories since the start of the pandemic. In the fourth quarter, however, businesses started to rebuild their inventories (figure 7). In addition, much of the increase in durable goods consumption has been satisfied by a rising trade deficit, as exports were reduced (effectively diverting some of that production to domestic consumption), and by increased imports. 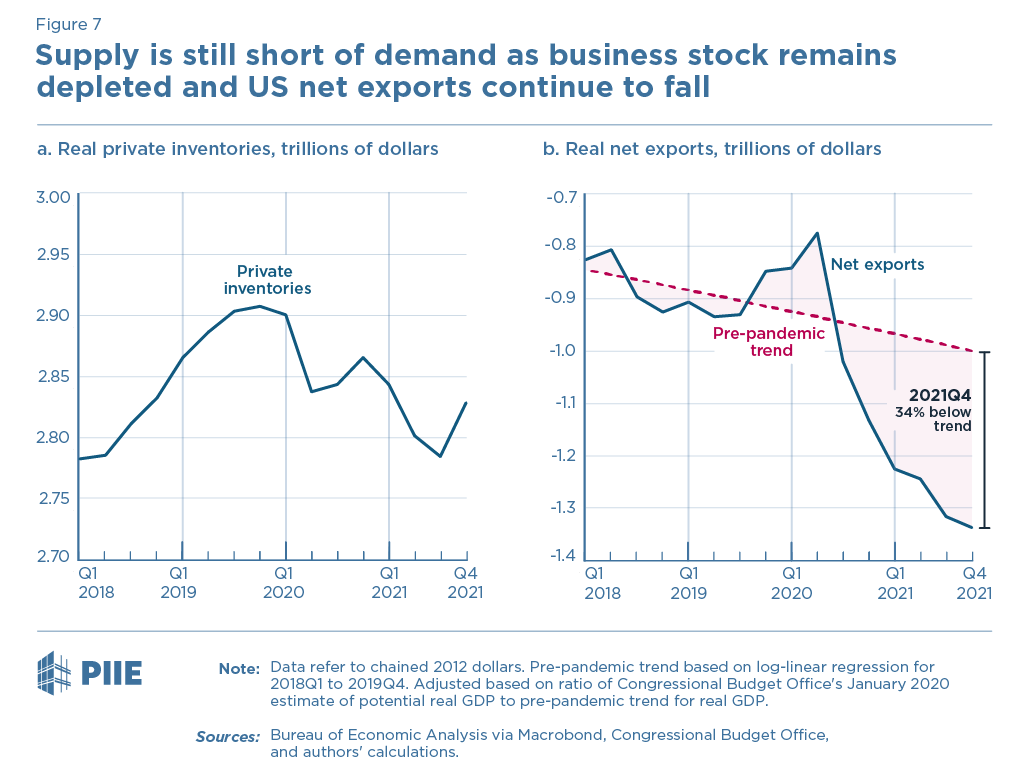 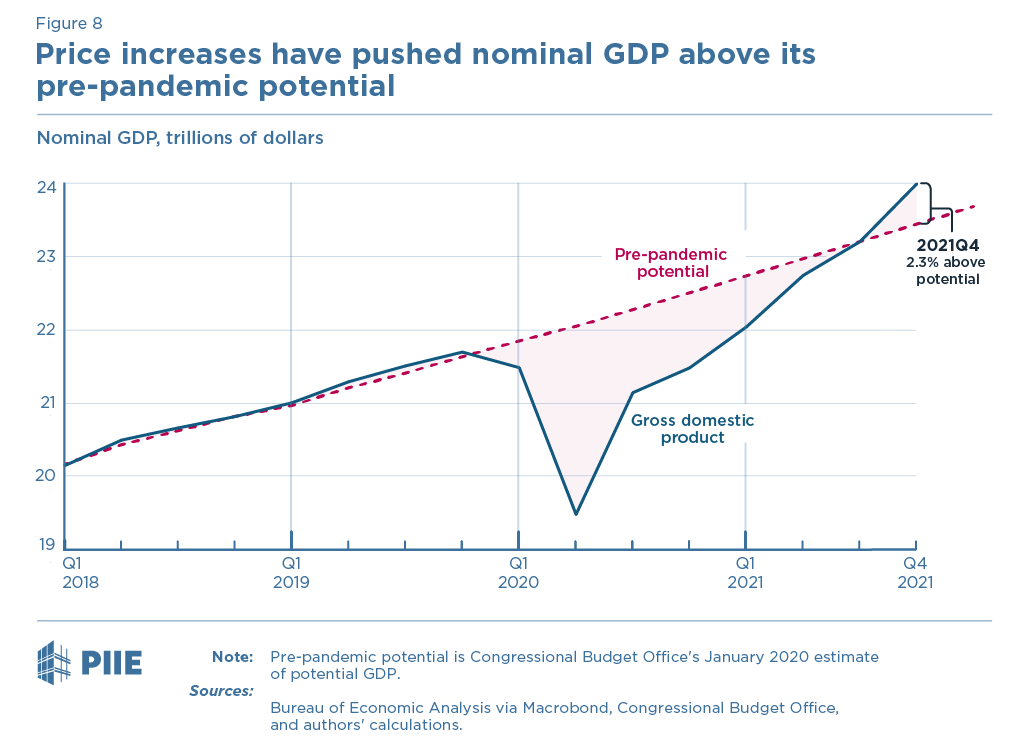 What This Means Going Forward

At the end of 2021, the supply-side of the US economy was adjusting quickly with a lot of additional production going into inventories rather than into final sales. At the same time, continued supply problems for critical components like semiconductors and a reduction in labor supply have continued to weigh on the overall economy. The supply constraints should continue to relax, enabling the economy to produce more, but they are likely to remain the binding constraint on the economy for some time.

One of the biggest constraints on the economy in the fourth quarter appears to have been the omicron variant of the virus, which may be peaking in parts of the country. Monthly data indicate that restaurant spending stalled in the quarter and roughly normalized, but other in-person services like travel and live entertainment have remained depressed. The dynamics of COVID-19, Americans becoming increasingly inured to the virus, and booster shots, should all help reduce some of the constraints the virus has placed on the economy in the coming months. But there is considerable uncertainty about additional variants and the persistence of behavioral changes.

The easiest phase of growth is well behind the US economy. Going forward, it will be tougher to make up for the remaining lost ground, especially to the degree that the virus stays at a relatively high level and to the extent to which the virus's effects are long lasting. As the economy was already around its potential output level in the fourth quarter of 2021, we will be able to rely less on strong catch up growth and must seek ways to expand the economy's underlying capacity.

Looking ahead, it is likely that both nominal GDP and real GDP growth will slow in 2022 because the level of fiscal support is smaller and because the economy is much closer to maximum employment. What happens to inflation depends on which of these slow more. If the economy can expand supply while demand rapidly cools, then inflation could fall from its 2021 pace, the most likely scenario. But nominal GDP may continue its strong growth, as consumers and businesses continue to take advantage of healthy balance sheets and low interest rates, while real GDP growth may be constrained by smaller employment gains and a wearing off of what could be a temporary bump in productivity. This would be a recipe for even higher inflation in 2022.

US GDP growth outpaced expectations in 2021