Ukraine is again failing to break away from its corrupt, oligarchic post-communist transition. The high hopes for reducing corruption after the Euromaidan revolution have faded, and the country is looking for new leadership in an unlikely place: Georgia. Mikheil Saakashvili, former president of Georgia, is rapidly gaining popularity as Ukraine’s most trusted politician. The success of his Rose Revolution in Georgia in bringing economic growth and eliminating corruption in government compares favorably to the Orange and Euromaidan revolutions in Ukraine, which did not usher in a new era for post-communist Ukraine.

Ukraine has long carried the stigma of being the most corrupt country in Europe. Transparency International’s corruption index rates it worse than Russia in combating graft and bribery, just ahead of Central Asia. But while most post-communist Central Asian countries have benefited from a bonanza of oil and gas to lift their economies, the Ukrainian economy has continued to slide.

Since 1989, income per capita in constant dollars increased from $5,420 to $11,650 in Eastern Europe, from $2,040 to $2,880 in the former Soviet Union, and from $3,400 to $3,900 in the Balkans.1 There is significant divergence, however. During that period, income for the average Estonian nearly tripled, while incomes in Poland rose by 137 percent, in Azerbaijan by 129 percent, in Albania by 110 percent, and in Croatia by 102 percent. In contrast, the average Ukrainian citizen became 26 percent poorer (see figure). 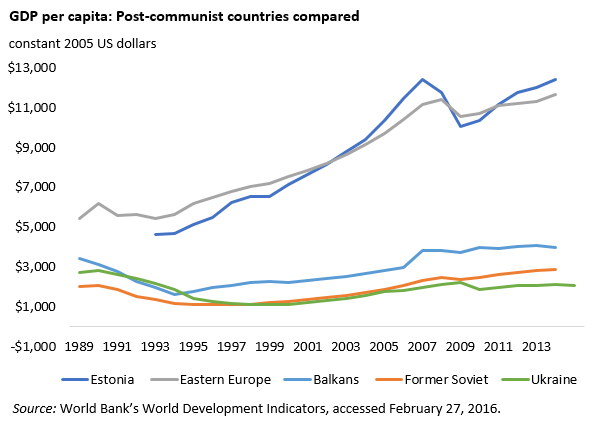 This fall in income has embittered ordinary Ukrainians. The rise in inequality, along with the ascendance of a dozen billionaires with close ties to government, have been even more devastating. These oligarchs have benefited enormously from corruption in government to become superrich and have used their riches to buy media companies and seats in parliament and further enhance their influence with future governments.

Ukraine is the primary example in post-communist Europe of captured media used as a tool for currying favors from politicians or for one’s own political career. One of the most watched TV channels is owned by Petro Poroshenko, Ukraine’s president. The other top ten TV channels are also controlled by billionaire oligarchs.2 Each channel promotes the political interests of its owner. The 1+1 TV channel, for example, is the mouthpiece of a political faction linked to billionaire Ihor Kolomoisky and offers openly favorable coverage of members of parliament belonging to this group. The channel also targets Saakashvili, now governor of the Odessa region, who has repeatedly asked for reducing the power of oligarchs in the country.3

Ukraine’s previous attempt at getting rid of the oligarchy—the 2004 Orange Revolution—only managed to substitute one set of oligarchs for another. The 2014 Euromaidan revolution has so far failed to change the status quo either. Increasingly, the hopes of the population are pinned on a proven crusader against corruption—Saakashvili. Without somebody willing to take on the oligarchs, Ukraine will remain fantastically corrupt. And more Ukrainians will vote with their feet.

2. For the profiles of Ukrainian oligarchs, see https://piie.com/publications/working-papers/origins-superrich-billionaire-characteristics-database.

How to Amend the Ukrainian Constitution

Payback Time for the "Yanukovych Family"