The Truth about Mexico

As depicted by the Trump administration, the Mexican economy has flourished under the North American Free Trade Agreement (NAFTA) at the expense of its neighbors, particularly the United States. The trade deficit between the United States and Mexico is often cited by President Donald Trump and his economic advisers as the reason why “jobs have been destroyed” and “factories have been stolen.” Economists generally argue that trade deficits alone do not spur or impede a country’s economic growth—and they do not support the notion that Mexico has benefitted while the United States has languished.

But leaving that point aside, a larger issue looms: Relative to its neighbors, Mexican economic performance over the past 25 years is anything but spectacular. The idea that the country has surged at the expense of its two NAFTA partners is not borne out by the data.

Economic theory suggests that poorer countries’ per capita incomes tend to grow at faster rates than incomes of richer economies because when countries are at an earlier stage of development, returns to labor and capital—particularly capital—tend to be higher than in more developed economies. Put differently, developing economies have more attractive investment opportunities than mature economies precisely because they have yet to reach their full potential. Theory thus suggests that over time, as economies develop, they eventually catch up to their richer counterparts, or that their per capita incomes tend to converge, all else being equal. Using GDP as a measure of income, the figure below shows Mexico’s growth relative to that of the United States and Canada over the last 25 years, controlling for inflation and exchange rate movements. 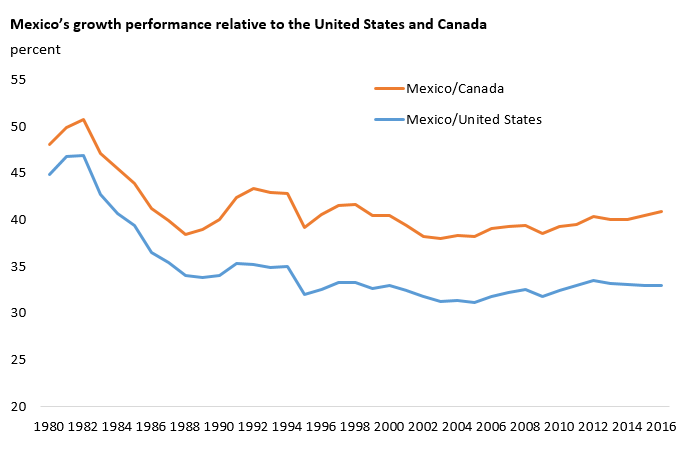 If economic growth theory and convergence were to hold in their simplest forms, as a lesser developed country, Mexico should have seen its GDP measures improve over time relative to the United States and Canada. In fact, the opposite has happened: After peaking at 45 percent and 50 percent relative to the United States and Canada, respectively, Mexico’s income stagnated in the 2000s. Between 2000 and 2016, Mexico’s per capita GDP amounted to just 33 percent of US GDP on average and about 40 percent of Canada’s GDP. Interestingly, the data show a bump in the early 1990s, when NAFTA negotiations were in full swing: Between 1990 and 1994, Mexico’s GDP rose briefly to 35 percent of US GDP and 43 percent of Canada’s GDP, only to drop in 1995 as a result of the so-called Tequila crisis, Mexico’s episode of acute financial turmoil that required US intervention.

After a massive debt buildup between 1975 and 1982, the Mexican government defaulted on its external debt obligations in 1982. The figure above, therefore, depicts a country that never really recovered from the 1980s debt crisis, despite NAFTA, which begs the question: Why has Mexico’s economy stagnated so resoundingly? While the trade agreement with its northern neighbors has certainly led to pockets of high productivity in Mexico as supply chains emerged and expanded, the country continues to be plagued by one of the highest shares of labor market informality in Latin America—around 60 percent of Mexico’s labor market functions outside of the formal economy—drug-related crime and violence, and a relatively unfriendly business environment that deters investment. Mexico currently ranks 47 in the World Bank’s Doing Business Report, with its worst rankings related to registering property (101) and paying taxes (114)—that said, it still fares somewhat better than its Pacific Alliance Partners (Colombia ranked 53; Chile, 57; and Peru, 54).

The truth about Mexico is starkly different from what the trade deficit narrative would have one believe. It is certainly not the story of an economic powerhouse built at the expense of the American worker but of a developing country that has failed to reach its full potential because of a number of severe domestic challenges. President Enrique Peña Nieto has been trying to remove these bottlenecks with an ambitious reform agenda aimed at enhancing productivity—including fiscal consolidation, breaking up monopolies, broadening the tax base, and encouraging business investment. However, setbacks and falling approval ratings have hampered the government’s efforts and raised the probability that an anti-reformist administration will be elected in 2018. Opposition front-runner Andrés Manuel López Obrador has been a strong critic of Mr. Peña Nieto’s policies and would likely end the reform agenda. As a result, without NAFTA and with a radically different administration, Mexico’s challenges may only get worse.