Spain and Italy: Roads Taken and Not Taken

It is rare for the euro area to get two new governments on the same day, and even more rare for them to take such different directions. Italy is now led by a populist coalition of the nationalist and euro-skeptic League Party and the left-leaning Five Star Movement (MS5). In Spain, Pedro Sanchez of the center-left PSOE party is the new prime minister following the downfall of Mariano Rajoy of the conservative Popular Party (PP) amid a string of corruption convictions against senior members of his party.

Italy: A Coalition of Extremes

The new government in Italy took office after a spike in bond yields provoked by the Italian president’s initial rejection of a euro-skeptic League party candidate for finance minister. The market turmoil reflected investor anxiety of a slide toward an exit from the common currency. Instead of the uncertainty that markets feared, Italy now has a government with technocrats on several economic posts, but also a weak prime minister surrounded by the two coalition party leaders, Matteo Salvini from the League as interior minister and Luigi di Maio from MS5 as labor and welfare minister.

An exit from the euro would be extremely costly for Italy and thus remains unthinkable. Yet the new coalition government's economic program is at odds with euro area inclusion. The program entails large tax cuts, introduction of a generous universal basic income (UBI) of €780 per week, and a pension reform enabling earlier retirement, which could cost the Italian government more than €100 billion per year, or 6 to 7 percent of GDP. Should the government put these measures into law—an uncertain outcome, given its slim legislative majority—credit rating downgrades would likely follow, jeopardizing the status of Italian government bonds as eligible European Central Bank (ECB) collateral. A clash with investors and the rest of the euro area would soon ensue.

The situation recalls that of Greece in the summer of 2015. While flouting the rules of the common currency, Greece was also politically unable to leave it because of the high domestic economic costs. The fundamental political question for Italy then becomes whether, or rather under which circumstances, one of the two governing parties will change its position to unambiguous support for the euro and the policies that entails. Will such a political shift be possible without first repeating the Greek experiences of 2015 and a serious economic crisis? If one believes the new technocratic finance minister, Giovanni Tria, the new government will not implement any the League-MS5 program but instead pursue an orthodox economic policy, avoiding any crisis. This stance conflicts with the electoral mandate of both governing parties, however, suggesting that a clash is inevitable. In a crisis, MS5 would seem the most likely to switch to a credible pro-euro course, in cooperation with mainstream parties. The internal machinations of MS5s, as a party whose membership base is internet-driven, are murky and erratic, however, guaranteeing uncertainty and possible new elections before long.

Spain: Staying in the Political Center

A different and more encouraging story has emerged from Spain. The now ousted Prime Minister Mariano Rajoy suffered the consequences for being less than forthright about institutionalized corruption. In light of the recent good economic performance of Spain, it is comforting to note that the new PSOE government has committed to implementing the budget for next year previously proposed by the Rajoy government, as part of the deal to secure support for its no confidence vote from regional parties. The transfer of power in Madrid will thus have minimal economic effects, even if the PP tries to use its majority in the Senate to punish some of the regional parties that switched allegiance to the PSOE.

At the same time, the fact that neither the outgoing nor incoming governing parties were interested in calling an immediate election signals an end to Spain’s post-Franco de facto two-party political system, where power switched between the PP and the PSOE and their respective supporters among regional parties. The new prime minister, Pedro Sanchez, made an impressive humanitarian gesture of accepting 629 refugees spurned by Italy, and looks certain to bolster his social-liberal credentials, but his action could also invite more migrants and human smugglers to Spanish shores.

New elections in Spain do not look far off, however. The PSOE’s parliamentary support includes the far-left Podemos party, regional parties from the Basque Country, and more controversially Catalonia. Catalonia legislators could cause problems for Sanchez if they continue to pursue their independence campaign, which has landed several political leaders in jail. This does not look like a stable majority coalition and could cost the PSOE political support in the rest of Spain.

If new elections follow later in 2018, the economically liberal, pro-Europe but strongly anti-Catalonian independence Ciudadanos Party could become the next kingmaker in Spanish politics (or take the crown themselves). The party has been polling roughly equal to Spain’s two traditional leading parties in recent months. Were it to emerge on top in a vote, undoubtedly difficult coalition negotiations would be required to succeed first for Spain’s first government not automatically led by the PP or PSOE to materialize.

Like France under President Emmanuel Macron, Spain can be expected to look for political renewal in the political center. That situation is the opposite in Italy, which seeks comfort from the political extremes. Recalling how different Spain and Italy’s economic developments in the euro era have been, this is not so surprising (see figure below). 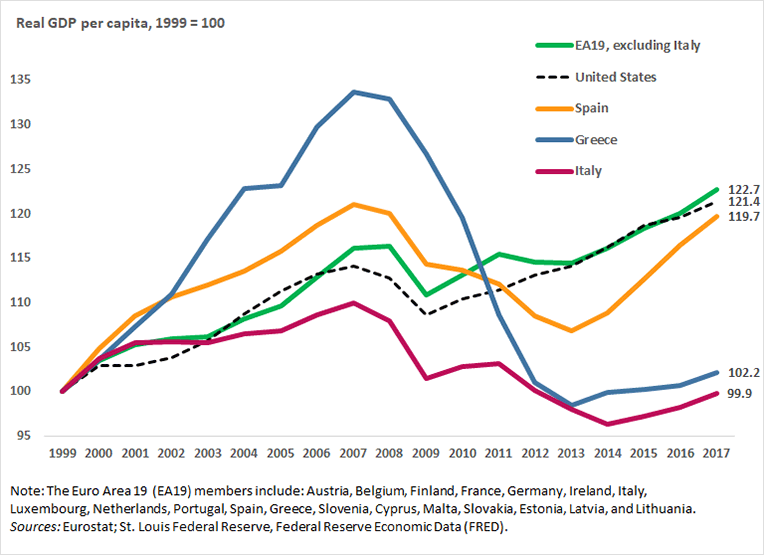 Italy’s real GDP per capita is today below its 1999 level—an economic performance worse than Greece, while in Spain it is almost one fifth higher and roughly on par with both the United States and the rest of the euro area.

Italy may have lost out economically nearly two decades inside the euro, but its new government is unlikely to improve the situation.

1. This is almost 30 percent higher than the €560 per week handed out in Finland during a UBI trial there that ended earlier in 2018.