A little noticed fact about the economic turmoil in southern Europe is that Portugal and Italy, two of the countries struggling the most, had minimal growth even during the seven good pre-crisis years of 2001–07.1 The most overlooked common problem of the four Southern European countries—Portugal, Spain, Italy, and Greece—is that they are all hampered by little education and the poor quality of the education system.

From 2001–07, Portugal grew by only 1.2 percent a year and Italy by 1.3 percent a year, close to stagnation. Especially for Portugal, the standard explanations for this poor economic performance do not apply. This was a time of loose fiscal and monetary policy. Both Portugal and Italy deployed great fiscal stimulus in that period. Portugal had an average budget deficit of 4.3 percent of GDP, and it never complied with the Maastricht budget ceiling of 3 percent of GDP. Italy's average budget deficit was 3.2 percent of GDP, and it complied with the Maastricht budget ceiling only in 2007. Both countries were able to sustain these deficits because they benefited from low euro bond yields. For Italy and Greece, the causes of low growth are many: the poorest business environment, the highest corruption, and the most overregulated markets in the European Union. Portugal and Spain, however, did not have such great shortcomings, and only Spain had a boom-and-bust in construction.

The great flaw of the four Southern European countries lies elsewhere, as the evidence here demonstrates. Figure 1 shows the share of the population of the ages 25–64 that has completed high school in 2012. The four countries have shockingly low rates: Portugal 38 percent, Spain 54 percent, Italy 57 percent, and Greece 66 percent. By comparison, the US number is 88 percent. With such a lack of education among citizens, the current elevated standard of living can hardly be sustained. From this perspective, the current high unemployment exceeding 26 percent in Spain and Greece does not look like an anomaly. Either salaries have to come down or education needs to rise. 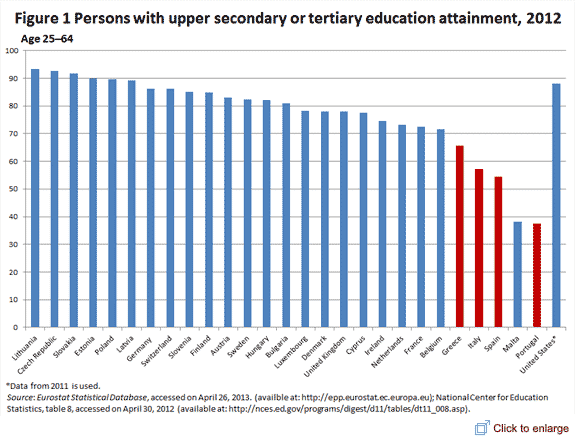 Another important aspect of education is quality. The most relevant measure is the ranking of knowledge of mathematics among eighth graders carried out in 75 countries by the Program for International Student Assessment (PISA) for the Organization for Economic Corporation and Development (OECD). The latest report available is from 2009 (figure 2). Again, the Southern Europeans come close to the bottom in Europe. 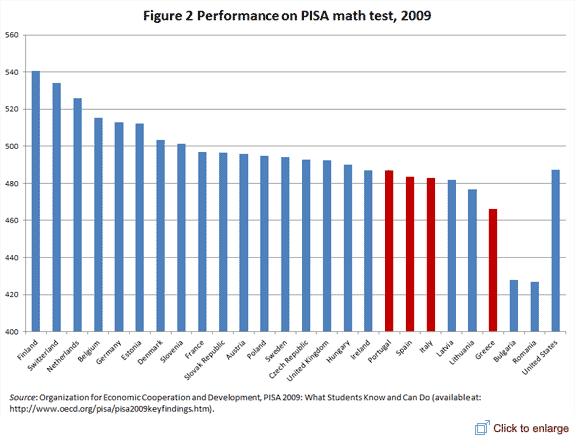 The conclusions of these simple observations are far-reaching and important.

1. Natalia Aivazova has provided me with excellent research assistance.

2. The World Bank does not publish any figure for Greece.

Assessing the EU Council Record: Cameron and Juncker May Work Well Together

European Parliament: The Strength of "Anti" Parties Has Precedent