In South Korea, gender diversity has improved for economics degrees, but not as much in economics teaching

In recent years, the economics profession in the United States has been debating issues of gender and race diversity with increasing frequency. Gender diversity in economics has not been discussed in South Korea, however, despite an increasing share of women obtaining undergraduate or doctoral degrees in the subject in the last few decades. For all that progress, gender diversity among economics faculty members in South Korea still lag.

Female students in South Korea earned more than 40 percent of undergraduate degrees in economics in the 2010s—and nearly 50 percent in universities located in Seoul in 2019 (figure 1).[1] Starting in the early 1980s, this share increased steadily and leveled off in the mid-2000s. The top South Korean schools improved gender balance in economics majors later than other institutions, and the share of female graduates with economics degrees grew rapidly in the last decade at these schools.[2] Although improvement has been impressive in economics, women made even greater strides in other fields of study. Gender imbalance among holders of undergraduate economics degrees is more pronounced in the United States than in South Korea, especially since women in the United States have a higher share of all undergraduate degrees. 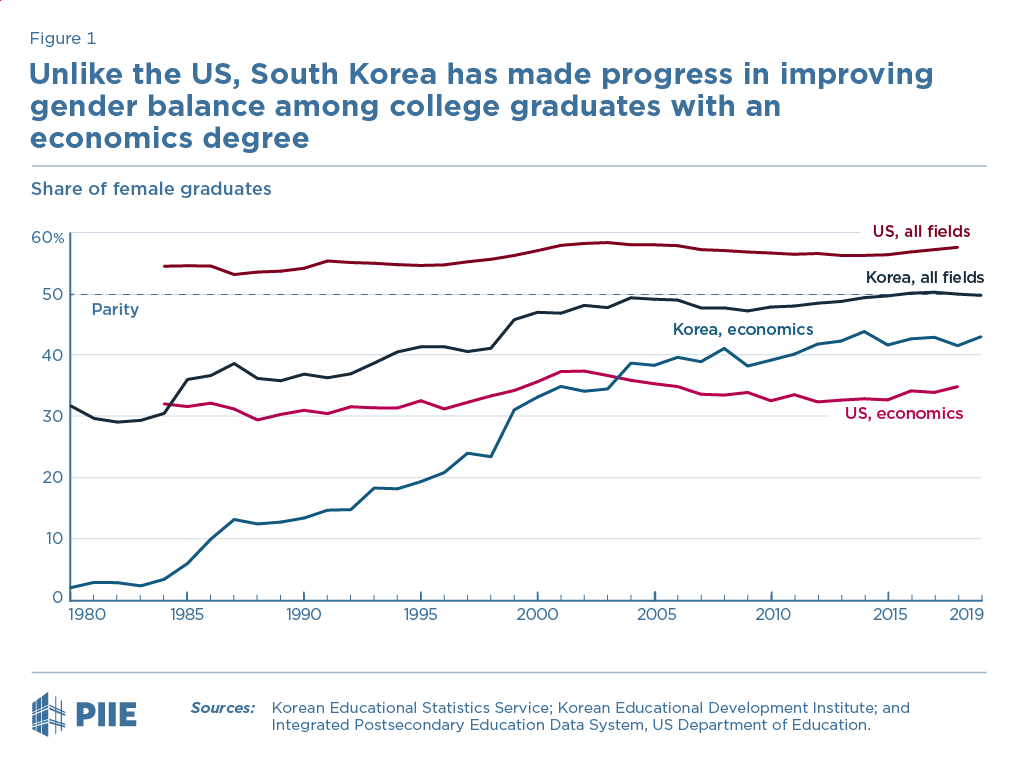 Exposure to economics prior to college

Harvard economist Claudia Goldin (2015) has pointed out that students who are determined to major in economics before entering college tend to do so. Men were twice as willing to major in economics as women in a case study of a highly regarded US liberal arts institution that she referred to as “Adams College.”

In South Korea, the gender mix of students wishing to study economics before entering college is more balanced. The trends of both the share of women applying to the economics major and female first-year students majoring in economics closely follow the share of female graduates with economics degrees shown in figure 1. Recently, women accounted for over 40 percent of both entering students and applicants in economics departments in South Korea. Students can switch their majors in college, but the similar level of interest in economics at the outset among South Korean male and female students is evident.

In addition, the share of male students who received 4 or 5 on either AP exam, ranging from 40 to 55 percent, has been systematically higher than the share of female students who scored 4 or 5, ranging from 27 to 42 percent. Both Goldin's 2015 study and 1997 work done by Karen Dynan, economist at Harvard and nonresident senior fellow at PIIE, and Cecilia Rouse, economist at Princeton, find that women are more likely to be discouraged from majoring in economics if their grades in introductory economics courses are poor. While this observation on the share of female AP exam performance does not claim causality, its similar trends with the share of female economics majors could be an indication that not only exposure but students’ performance in the subject before going to college may be important.

The United States has a more decentralized educational system compared to South Korea; state governments have authority over economic education in high schools. According to the 2020 Survey of the States by the Council for Economic Education, 23 states required high school students to take economics classes in 2020.

Two major channels offer students in South Korea the opportunity to study economics before college: the national high school curriculum and preparations for College Scholastic Ability Test (CSAT). In the 1980s, as higher education expanded, education policymakers began to focus more on girls and women. Both the national high school curriculum and CSAT have changed at the direction of policymakers and the Ministry of Education. During 1974–81, politics and economics, taught as one subject, became a mandatory course for all high school students. In the early 1990s, the subject split into two courses, which have become optional. But for several years in the 1980s, all CSAT takers were required to be tested on politics and economics.

This involuntary exposure to economics before college from the mid-1970s to the early 1990s could have sparked male and female students’ interest. A positive correlation between students exposed to economics prior to college and those majoring in economics in college one year after high school is observable in the Korean Educational Longitudinal Study of 2005.[3] Because the Korean Institute for Curriculum and Evaluation does not publish CSAT score distribution data on optional subjects by gender, it is not possible to conduct an analysis similar to the one done for the United States with AP exams data.

The overall female shares of economics professors in three categories—assistant, associate, and full—have been improving in both countries but at different rates (figure 2). In South Korean top schools, the share of female associate professors jumped from 3 percent to 17 percent in the last five years. This increase suggests female professors may be advancing from assistant to associate positions, which is a great step forward for women. However, assistant professor positions have not been filled with women in the meantime, as the share of women in these positions has continued to slide down in the last few years. It is striking that there have been no female full professors in economics at South Korean top schools for ten years. In the coming years, the record may improve. 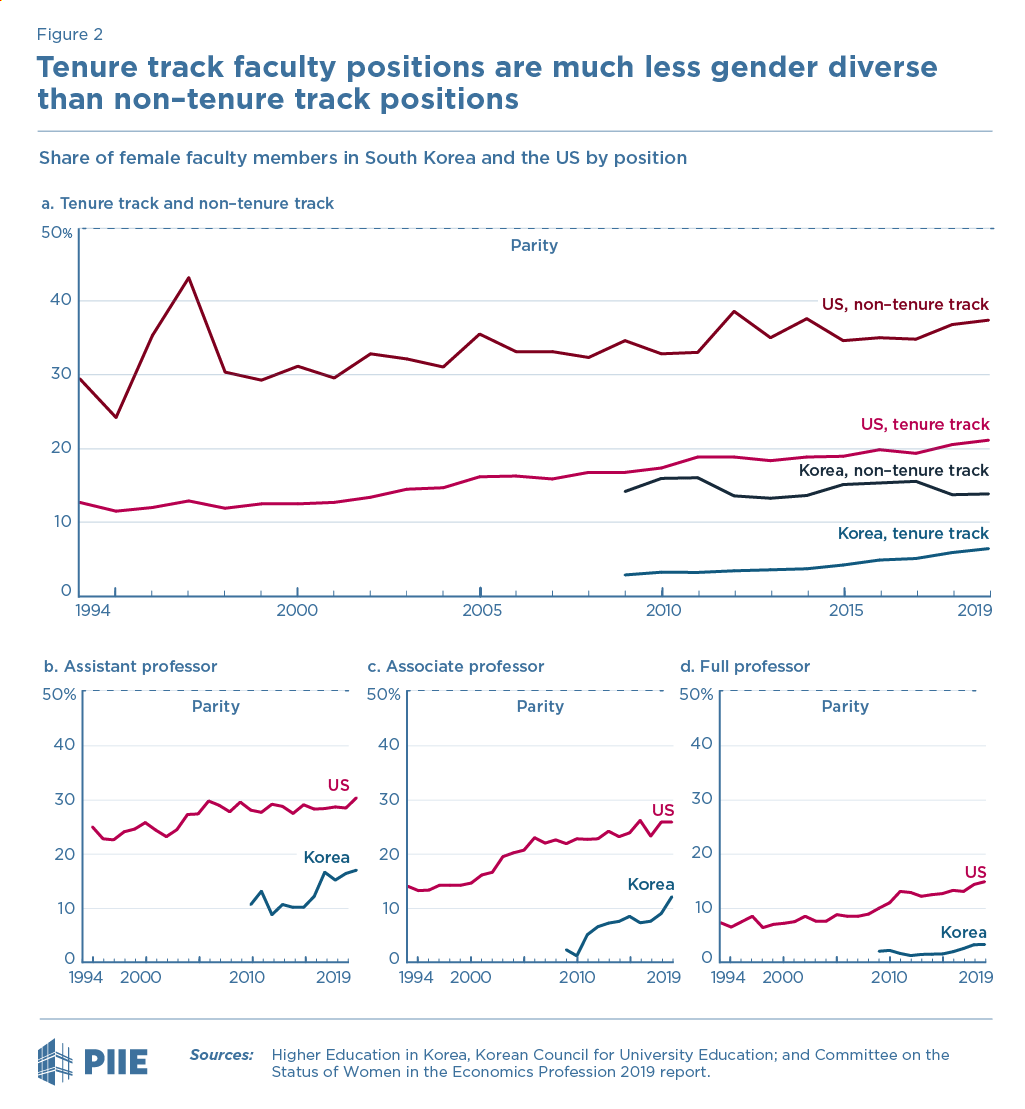 There could be several explanations for the lack of gender balance among economics professors in South Korea. For example, a dearth of female economists in the country could be one argument. However, the share of women with doctoral degrees in economics from South Korean universities is substantially greater than the share of female assistant professors in the field (figure 3). Since the 1990s, more women have enrolled in PhD programs in economics in South Korea, and the proportion of women receiving doctoral degrees in economics has also risen steeply, whereas American shares have been somewhat steady in recent years. While there are numerous economists in South Korea with credentials from abroad, the data indicates that there are some, although not enough, female economists. 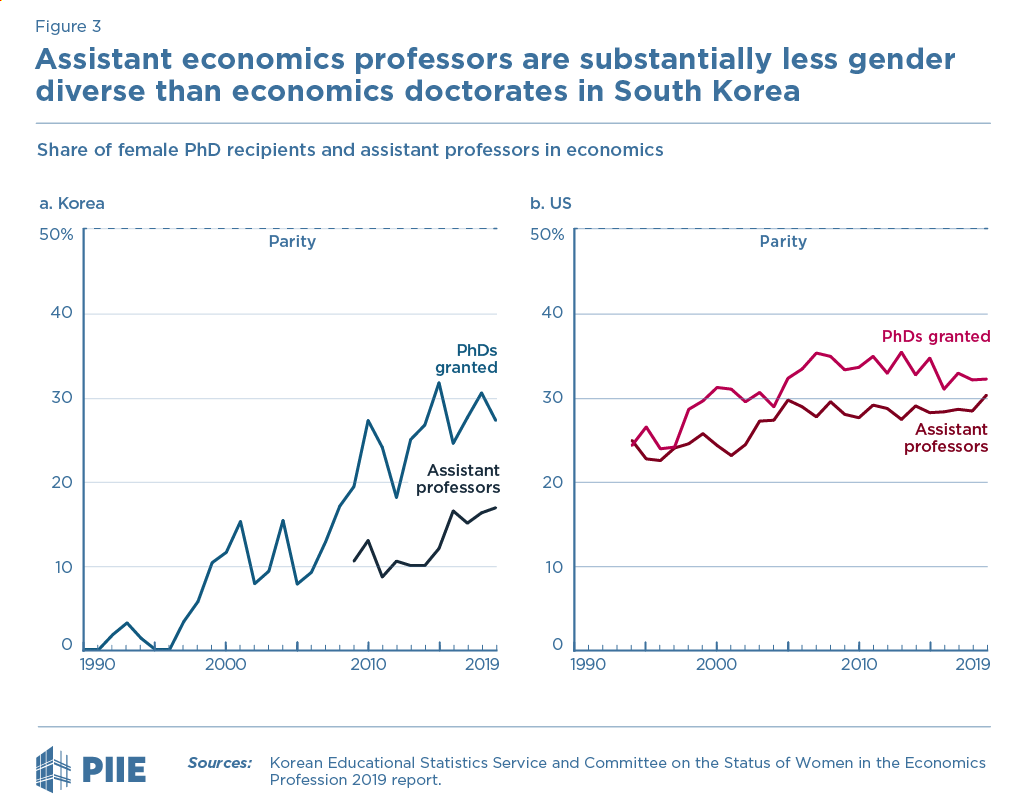 The increase in the share of women receiving degrees in economics in South Korea is astonishing. Despite this increase, surprisingly few women become economics professors. South Korea's impressive success in moving more women into the study of economics has yet to translate into more women among its economics teaching ranks.

1. Refer to the appendix for data sources and notes on collection and cleaning.

4. Committee on the Status of Women in the Economics Profession. The US data in this article refers to schools with PhD programs in economics, whereas South Korean data includes all universities regardless of the availability of economics PhD programs.

US data on the share of female doctoral awardees and professors in economics is from table 1 of the 2019 annual report of the Committee on the Status of Women in the Economics Profession.

The data from 1999 to 2019 come from the Korean Educational Development Institute and are at the university level. The dataset lists 108 universities offering a major with the traditional title of "Economics." However, some schools have unique names for their economics majors. There are 177 majors total with economics as part of the title at 114 universities. The names of some majors reflect specialized areas within economics, such as “Environmental Economics,” “Financial Economics,” and “International Trade.” Other names reflect a program of study that combines with another relevant field, such as “Economics and Accounting,” “Economics and Public Administration,” and “Economics and Management.” This group of majors with non-traditional names is referred to in the data for this blog post as “broader economics.”

The Korean Council for University Education provides data on professors at a total of 1,273 universities. The dataset lists 143 schools with 161 majors with economics as part of the program title and 111 universities with an “Economics” major (traditional title).

The data on entering and enrolled students in PhD programs in economics and on economics doctoral degree awardees are from the Korean Educational Statistics Service. These data are at the national level.

Figures 1, 2, and 3 show trends for only the “economics” major (traditional title). Nonetheless, the data for majors falling under the grouping of “broader economics” show trends similar to those found in the three figures. 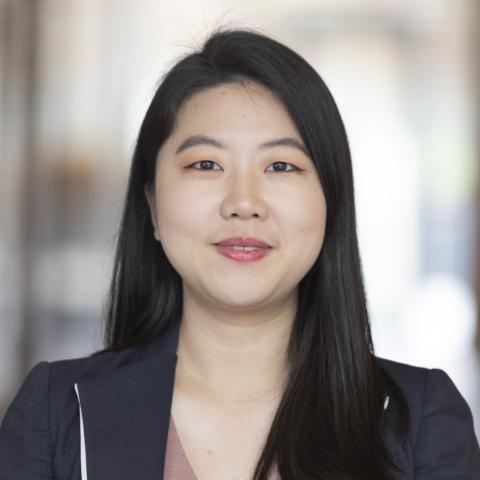