Despite the difficulties of Prime Minister Brian Cowen of Ireland in laying out a plan to address the imploding banking sector, the Irish Treasury managed this week to sell a heavily oversubscribed €1 billion of 2018 and €500 million of 2014 bonds. They were costly, with dear yields of 6 and 4.8 percent respectively. But the sale should help to calm renewed fears about the immediate Irish financial situation.

Much of the attention in Ireland focused on Cowen's apology last weekend for his "coarse voice" in discussing details of a party conference, perhaps reflecting the celebratory strain that attends such affairs. But beyond such commentary, it is clear that without a credible strategy for their banks and longer-term budget solvency, Ireland will be plagued by lingering financial and fiscal concerns. Speculation here about what Ireland might have to do remains justified.

When thinking about a possible future crisis assistance package for Ireland by the European Union (EU) or the International Monetary Fund (IMF), several issues arise.

First, from which pot of money would any assistance package come? Though the eurozone's €440 billion European Financial Stability Facility (EFSF) received AAA-ratings from all major agencies this week—and hence moved closer to being operational—this new facility may not be the most likely source of aid.

Instead, the smaller €60 billion European Financial Stability Mechanism (EFSM) guaranteed by all the EU-27 via the European Commission budget (along with €35 billion in uncommitted funds from existing Balance of Payment facilities originally intended for new noneuro member states) would seem to be a better candidate. Far less political implementation risk surrounds this facility. Its predecessor entity was already tapped for Hungary. When spiced up with an additional 50 percent IMF contribution, the nearly €100 billion EFSM and Balance of Payment facility should suffice for an assistance package to Ireland (Ireland's GDP is roughly two-thirds that of Greece).

The new head of the EFSF, Klaus Regling, has stated that he thinks no country will ever use it. He may well be right. But that does not mean that the European Union won't be able to bail out smaller members like Ireland or Portugal. After all, the EFSF was intended to deal only with a "large member state emergency." Given Spain's recent steady performance, that has become much less likely.

There is an issue of the conditionality attached to any assistance to Ireland. The IMF-led program for Greece contains a very long list of tough and urgently needed structural reforms, and obviously the same regime would likely be applied to Ireland. Several particular political concerns arise about any conditionality for aid to the erstwhile Celtic Tiger, however.

The Slovakian government infamously refused to participate in the Greek bailout, comparing it to a "reverse Robin Hood transaction," in which the poor Slovakians would be subsidizing the richer Greeks.

Imagine, however, the uproar across the eurozone if voters in these countries were asked to help Ireland, which in 2009 had the second highest GDP per capita in the European Union. Only Luxembourg was higher. This is illustrated in figure 1. 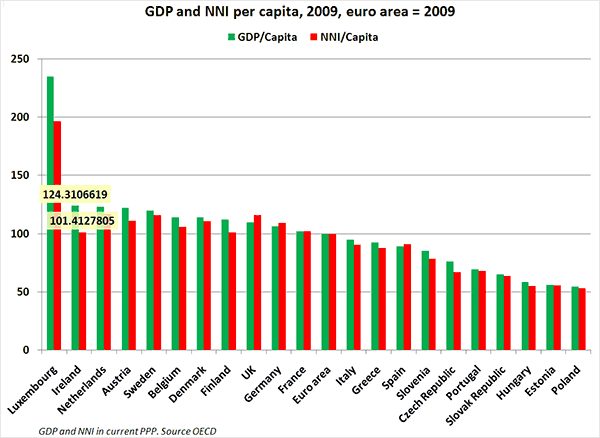 Reflecting the very large presence of foreign multinationals in the Irish economy, figure 1 also includes data for net national income per capita for 2009.1 Here Ireland is much closer to, but still above, the eurozone average at just 101.4 percent.

That might seem like a better reason for getting help from the European Union—better, anyway, than higher GDP numbers. Yet the reason for the large difference between Ireland and other countries in its GDP and net national income is for sure not one that Ireland wishes to remind its European partners to remember.

The large presence of foreign multinational companies in the Irish economy can be traced back to the pioneering Irish slashing their corporate tax rate from 40 percent in 1993 to 12.5 percent today. In many ways this tax cut was an example of the benefits of "EU regulatory competition," which has led to a significant reduction in overall EU and OECD corporate tax rates . However, when viewed by the principal sponsors of any future Irish bailout among its EU partners—France and Germany in particular—the race to cut taxes could amount to a classic "beggar-thy-neighbor policy" aimed at bribing EU companies to relocate to Ireland.2

Leaving aside Ireland's corrupt ties among real estate developers, banks, and politicians, the country is not perhaps as politically undeserving of European solidarity as "systemically corrupt" Greece (Prime Minister Papandreou's words ). But there will nonetheless be substantial obstacles.

Just as Delaware's low corporate tax policies would not likely survive a hypothetical federal bailout (or from the national governors association!), Ireland's corporate tax rates will probably not survive unchanged following a future bailout. Despite the obvious harm to the Irish economic model of a likely substantial increase in its corporate tax rates, you can't bite the hand that feeds you in a crisis. It would be hard to imagine that substantial "upward tax harmonization" would not be politically demanded by Paris and Berlin in return for any bailout. Indeed the first German politicians have already made this type of demand in advance. Beggars can't be choosers will bring an end to beggar thy neighbor in the Irish case.

Obviously, the Irish decision makers know this and can consequently be expected to try to avoid an EU bailout. It is even possible that Ireland, were the need to arise, would prefer to go directly to the IMF. Or perhaps Ireland will try to avoid such an outcome by agreeing for a time to pay market interest rates higher than what would be available under "conditional EU funds."

Ireland's relative affluence when compared to its partners, when combined with the punishment meted out to the Latvians—another country caught up in a boom-bust cycle—suggests that truly draconian cuts would be demanded of the Irish in return for an EU bailout.

After all, were Ireland to suffer a decline in GDP per capita similar to that of Latvia—about 20 percent—it would merely be down at around the eurozone and EU average income level and back at Irish income levels in the late 1990s (in real terms). Extremely unpleasant, yes, but hardly the potato famine.

Though such a deflationary cure could wreck Ireland's debt to GDP ratio by shrinking the numerator dramatically, Irish leaders would be ill-advised to bet against this political dynamic materializing in any European bailout.

1. Net national income corrects for the presence of foreign-owned enterprises in a country by including net foreign income (interests and dividends, also known as net foreign factor income) flows and subtracting indirect taxes and depreciation.

2. Ireland can be argued to have shown that the old "Laffer curve argument" actually does work—however, only if you can attract huge amounts of tax revenues from abroad, rather than by actually growing the existing domestic economy any faster.

To Be Ireland or Iceland?—The Real Choice Before Cypriot Voters

A Spate of Recent Positive Events in the Euro Area

Ireland's Endorsement of Austerity and Other Reasons for Euro Optimism