Should We Expect a Rebound in TFP Growth? Insights from the 1930s

After growing at an annual rate of 1.4 percent between 1995 and 2007, total factor productivity (TFP) decelerated to an annual rate of 0.4 percent between 2007 and 2016, raising concerns that the slowdown has been persistent if not permanent (Gordon 2016). Such a slowdown could have far-reaching consequences for economic development and a host of economic institutions. Whether the first estimate of TFP growth during 2017—to be released tomorrow by the Bureau of Labor Statistics (BLS)[1]—shows a rebound remains to be seen. An uptick in productivity growth would be important as it would likely shape market participants’ views about the future of productivity growth and the pricing of a wide range of assets.[2]

This post compares the evolution of TFP growth during the Great Depression and the more recent Great Recession, providing a useful perspective on the current TFP slowdown and concerns about secular stagnation (Hansen 1939). The rebound in TFP growth in 1939–41 against the backdrop of a strong recovery supports the idea that TFP growth is procyclical (rising in booms and falling in recessions) after long periods of subdued growth. But the timing and form of fiscal stimulus during those years was more instrumental than the increase in demand in prompting entire sectors to change their behavior and adopt new technologies.

Reasons to be optimistic today

Recent improvement in economic activity has fueled hopes of a possible rebound in productivity growth.[3] Techno-optimists have long argued that it takes time for radical technological changes in robotics, artificial intelligence, biotechnology, digitization, and materials design to increase productivity (Brynjolfsson, Rock, and Syverson 2017). If so, the rich world may be experiencing a repeat of the “productivity paradox” of the late 1980s, when—as Robert Solow said—“the computer age was visible everywhere but in the productivity statistics” (McKinsey Global Institute 2018). The first paradox was eventually resolved as the annual rate of TFP growth increased from 0.5 percent in 1987–95 to 1.4 percent in 1995–2007. The idea that productivity growth might be procyclical also has been feeding hopes of a productivity rebound. Proponents of this view believe companies have greater incentives to implement productivity-enhancing innovations now that demand for their products is high and labor costs have increased. In this view, the TFP growth slowdown could be ascribed largely to the overhang from the financial crisis and thus be inherently temporary.

Comparing TFP growth during the Great Depression and Great Recession

Figure 1 compares the path of TFP growth in the Great Depression (blue line) and the more recent Great Recession (red line). The parallels in the dynamics of the two series are striking. In both periods, TFP growth slowed before the crisis. TFP grew at an annual rate of 2.9 percent between 1920 and 1925 and slowed to an annual rate of 1.4 percent between 1926 and 1929. This 50 percent decline is comparable to the slowdown in TFP growth from 1.7 percent in 1998–2003 to 0.8 percent in 2004–07. In both the Great Depression and Great Recession periods, TFP growth was lowest and even negative during the worst phase of the recession, then strongly recovered from its trough, but declined again for several years.

Productivity growth was low in the late 1920s and early 1930s despite the electrification and reconfiguration of American factories. New materials like Plexiglas, Teflon, and nylon were introduced, and existing products like automobiles and refrigerators were vastly improved. Public expenditures on improving roads, bridges, and tunnels were notable in addressing the deficiencies of a transportation system that had not kept up with the soaring sales of private vehicles during the previous decade. Together with the consolidation of the railroad system, these changes made the transportation of goods across regions easier. In contrast to conventional wisdom, the 1930s were arguably one of the most technologically progressive decades in US history, with spending on research and development (R&D) doubling and employment of researchers and other R&D personnel quadrupling at a time when unemployment was in double digits (Field 2012). 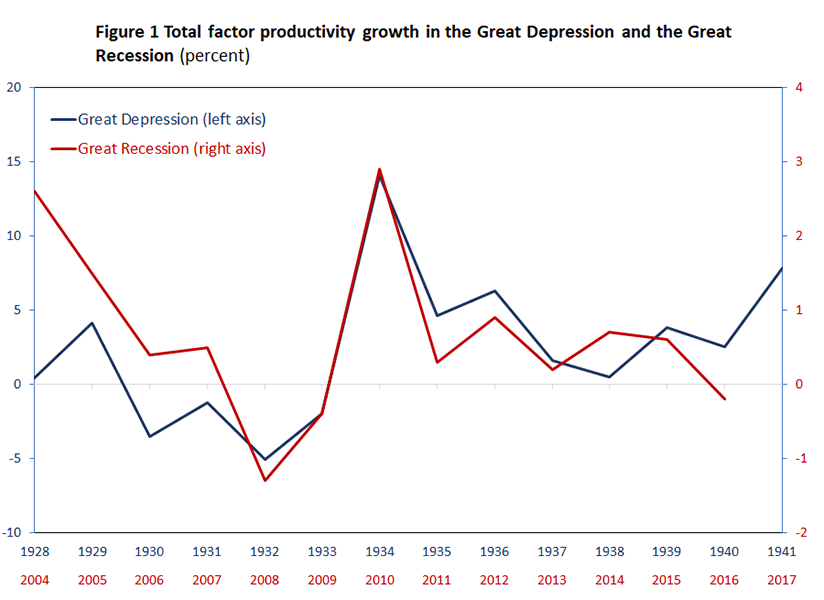 Like today, growth recovered  against the backdrop of strong fiscal stimulus. In fact, the increase in the cyclically adjusted budget deficit in 1938–41[4] best counters the view that fiscal policy was an “unsuccessful recovery device in the ’thirties—not because it did not work, but because it was never tried” (Brown 1956). If anything, fiscal stimulus was a particularly successful recovery device in these years as GDP grew at an average annual rate of 11 percent between 1938 and 1941.[5]

The fiscal stimulus was particularly effective in boosting demand in 1938–41 because the timing was right. Government spending increased following the 1937–38 recession when unemployment was still in the double digits (Lebergott 1964, Darby 1976). In current empirical work on large fiscal expansions in OECD countries over the postwar period, my coauthors and I find that fiscal multipliers are particularly large in bad times, but low and close to zero in good times (Cohen-Setton, Ladreit, and Gornostay 2018). If that is indeed the case, one would expect a lower bang for the buck from the Tax Cuts and Jobs Act of 2017 today.

In the 1938–41 period, fiscal stimulus took the form of increases in military spending and public spending, which likely prompted entire sectors to adapt their behaviors and embrace the radical innovations that had occurred in the early 1930s. For example, use of electricity in manufacturing was an innovation of the 1930s. But one had to wait until the late 1930s to see a rise in the use of that technology. After increasing modestly between 1929 and 1937, use of electricity in manufacturing almost doubled between 1938 and 1941 (Eichengreen 2017). Military spending also provided the right stimulus for increasing the use of improved roads and railroads. Today, it is difficult to imagine how corporate tax cuts would spur firms to adopt new technologies at this rate.

How TFP growth could rebound today

TFP growth could, however, rebound against the backdrop of higher demand, irrespective of whether it is due to fiscal policy. One can think of three possible mechanisms, with very different implications for the future of productivity growth.

First, as already noted, companies may substitute capital for labor more intensely as labor costs increase (McKinsey Global Institute 2018). Unless there are labor shortages in some occupations, it is difficult to imagine how this effect could be strong and sustained enough to matter.

Second, companies may start using inputs more intensively, which would translate into higher “measured” productivity gains, if adjustments for factor utilization are imperfect.[6] One would have to dig deeper into the mechanics of these adjustments to assess the relevance of this hypothesis. But this mechanism certainly helps explain some of the rebound of 1934 and could again spur a short-lived turnaround in productivity gains.

Third, TFP growth might increase with an increase in demand simply by chance. Productivity typically leaps ahead with a lag in response to technological changes. Assessing the productivity-enhancing capabilities of recent innovations and their likely speed of diffusion is no easy task. But lags in technological diffusion irrespective of demand conditions would likely provide the best explanation if a rebound in productivity growth today became sustained.

Gordon, Robert. 2016. The Rise and Fall of American Growth: The U.S. Standard of Living since the Civil War. Princeton University Press.

McKinsey Global Institute. 2018. Solving the Productivity Puzzle: The Role of Demand and the Promise of Digitization. McKinsey and Company.

Jeremie Cohen-Setton is research fellow at the Peterson Institute for International Economics. The author thanks Adam Posen for useful feedback.

1. BLS calculates TFP or what it calls “multifactor productivity” by dividing an index of real output by an index of combined units of labor input and capital services. In this post, I use the term productivity to mean TFP productivity, not labor productivity, which is also influenced by capital deepening and improvements in labor quality.

4. Official cyclically adjusted budget numbers are not available for this period. De Long (1998) estimates that the full-employment deficit increased by about 2 percentage points between 1938 and 1941.

5. Data on GDP are from https://fred.stlouisfed.org/series/GDPCA.