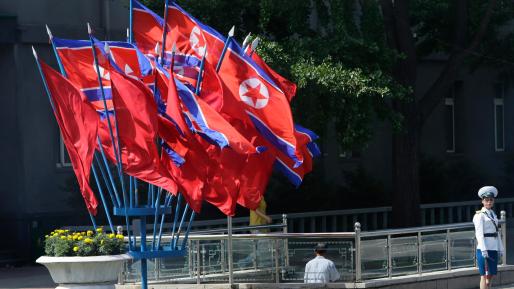 North Korea is facing a humanitarian and strategic challenge

Having just conducted an intercontinental ballistic missile (ICBM) test in defiance of United Nations Security Council resolutions, the North Korean regime appears to be preparing for another nuclear weapons test, which if it transpires, will elicit intensified international sanctions. The country also appears to be drifting toward a food crisis, undergoing its first wave of the COVID-19 pandemic, and experiencing an outbreak of a mysterious intestinal disease. How does one resolve these apparently contradictory developments?

In the case of North Korea, the usual typology of a complex humanitarian emergency—state failure leading to human suffering and death—is turned on its head: Rather than lack of state capacity, the core challenge is a "hard" state that does not adhere to international norms.

North Korea has the hallmarks of an emerging humanitarian disaster. Data on food availability suggest that the country had already fallen below minimum human consumption needs before inadequate snowmelt put the winter and spring crops at risk. Food insecurity is chronic, and during the 1990s, the country experienced a famine that killed perhaps 3 to 5 percent of the population.

Agricultural production declined partly due to the country's self-isolating border closure in response to the pandemic and the consequent collapse of international trade—which was already under multilateral sanctions in response to past military provocations.

That self-imposed blockade pushed up grain prices internally, well above prices observed in China or the global market. Price volatility is increasing, and there is some evidence that in response to pandemic controls, prices are beginning to diverge spatially, reversing the trend toward a more integrated national market. Planting and harvesting may be disrupted by pandemic-related lockdowns and social distancing measures, further stressing the agricultural production system.

Yet at the same time the country appears to be slipping into catastrophe, the government is defiantly testing ICBMs and apparently preparing for yet another nuclear test.

Under these circumstances, it would be understandable if countries conditioned the provision of humanitarian assistance with compliance with Security Council resolutions. Yet the diplomatic salience of aid—never high—at the moment would appear to be particularly low: From a North Korean perspective, Russia's invasion of Ukraine has underscored the utility of nuclear weapons. The war has also intensified North Korea's economic distress. The war has contributed to a rise in food and energy prices globally. North Korea is a net importer of food and energy (and fertilizer, which is energy-intensive in production), so these price movements represent a deterioration in the country's terms of trade.

There also may be some offsetting effects, however. Coal is North Korea's largest export and before sanctions approximately 95 percent of it went to China. North Korea could be expected to benefit from rising coal prices on its surreptitious trade. And if in response to rising energy prices, China slows the decommissioning of coal-fired power plants, Chinese demand for North Korean coal could be sustained.

Similarly, while energy prices are rising, Chinese refiners are reportedly importing Russian oil at significantly discounted prices, and it is conceivable that North Korea could benefit from a partial passthrough of this windfall.

In short, the global rise in food and energy prices is bad news for North Korea, but some of the adverse movements in the terms of trade might be offset through idiosyncratic channels. Moreover, tensions between the West and China and Russia are such that any attempt to link either food or vaccine aid to strategic goals would be subject to enormous coordination problems. The North Korean regime appears to be committed to its nuclear posture and has consistently refused offers of vaccine assistance from international donors and foreign governments. And following the May 2022 ICBM test, Russia and China vetoed a UN Security Council resolution that would have tightened economic sanctions. The North Koreans could be forgiven if they interpreted that vote as a green light to proceed with nuclear testing.

At the core of the North Korean conundrum is a repressive political system that allows the regime to prioritize its narrow goals to the detriment of societal welfare to an uncommon, if not unprecedented, degree. That lack of accountability is what allows the North Korean regime to conduct external provocations amid growing internal distress. Indeed, the missile and prospective nuclear tests could be interpreted as a signal of the leadership's comfort with the status quo.

Another, less belligerent, path is available. The outstanding issue is whether the North Korean regime is willing to pursue a reform path that would enable the resolution of its chronic food insecurity or whether its foreign and domestic policy commitments, together with possible enablement by China and Russia, will discourage the policy changes that would avert such distress in the future.