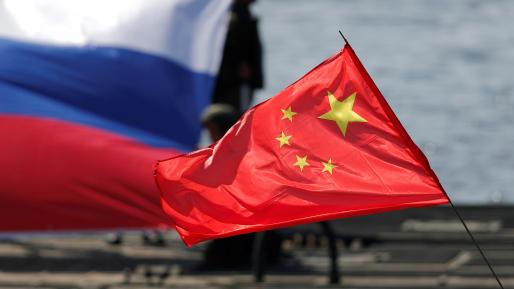 The barrage of US export controls aimed at punishing Russia for invading Ukraine by shutting off its ability to purchase advanced technology and much more comes from a playbook that Washington previously used successfully against Huawei, the Chinese telecommunications giant. Ironically, all eyes are now on whether China, which supplies nearly a quarter of Russian imports, will comply. Though Chinese officials have decried US sanctions, they may have to go along to avoid new controls being slapped on China's imports.

The controls—known as foreign direct product rules (FDPR)—apply not only to exports to Russia from the United States but to many Russia-bound products made all over the world. They are an extraterritorial application of US controls to a wide variety of goods and software made with US technology—which is hard to avoid for a swath of advanced goods like semiconductors.

In concert with similar measures in other countries, the restrictions will stem the flow of crucial technology like semiconductors that Russia needs to upgrade and even maintain its military, as well as other strategic industries. Europe, which exports 50 percent more goods and services to Russia than China does, is fully onboard, and countries that go along with such controls will be exempt from many of the new extraterritorial US rules. Accordingly, for the first time since the Cold War, a large coalition of top technology producing countries are coordinating with Washington to impose similar controls on a major economy.

The anti-Russia consensus was notably lacking for controls aimed at China, which created frictions with US allies and other countries. Their unilateral nature also made those measures less effective and encouraged countries to get around controls by moving production and research and development out of the United States. The controls now being imposed by the United States and its allies establish the foundation for more coordinated punishment that could be used against China in the future, especially if it invades Taiwan or does not go along with the export controls against Russia this time around.

New Rules and Impact on Russia

Here is how the new rules work: Licenses, which with few exceptions will not be granted, are now required to export a wide variety of items from the United States to Russia, not just dual use items with commercial and military applications, including semiconductors, lasers, and navigation and telecommunications equipment. The focus is on "defense, aerospace, and maritime sectors," but the rules cover even relatively low-tech goods usually only controlled if destined for countries like North Korea and Iran.

The effect on Russia and US companies would be minimal if only US exports were controlled. In 2020, only 2.9 percent of Russian imports came from the United States,[1] and only 0.3 percent of US exports went to Russia, 79.7 percent of which were for goods that did not have an export control classification number (ECCN). These exports may not require a license even under the new rules unless they are destined for one of dozens of listed entities linked to the governments of Russia and Belarus or their defense sectors. To limit pain on Russian citizens and allow access to information from the rest of the world, regular consumer goods like clothing, iPhones, routers, encryption software, and TVs can still be legally exported to Russia.[2]

Yet the combination of reputational risk and financial sanctions have led firms like Apple to stop product sales in Russia and the top container lines to halt shipments, going beyond what current export controls demand. Further restrictions could follow—oil refining is the most recent addition to the lists—but once firms have a better sense of what is controlled, some of this commercial activity may resume.

Controls on exports from other countries on which Russia depends will have a larger impact than rules that apply to only US exports. The United States has only about 15 percent of global semiconductor manufacturing capacity, but using the US FDPR on Huawei crippled its ability to source advanced chips. A product made outside the United States with zero US components could be controlled if its production process uses controlled US technology or software.[3]

The FDPR now being applied to Russia (and more recently Belarus) effectively extends the US controls beyond goods covered earlier to goods on the control lists made anywhere in the world with US technology. Even stricter rules apply to the list of defense and government entities, shutting off their ability to buy goods even as ordinary as t-shirts or nail clippers from anywhere in the world if they were made with US technology.

The ubiquity of US technology, especially for advanced semiconductors, makes the new FDPR hard to avoid. True, it may be challenging to monitor diversion of products to the military once in Russia. But if the rules are effectively implemented by enough other countries, they would amount to a near blockade of the advanced technology Russia relies upon to keep its military operating and strategic industries advancing, dealing a strong blow.

On its own, the US Commerce Department could never ensure compliance on so many transactions outside US borders. But Russia's invasion of Ukraine has led to buy-in from more than 30 countries, including the entire European Union, the United Kingdom, Japan, and Korea—economies that add up to over half of global GDP imposing their own controls. The contrast with the Huawei case, where the United States was mostly alone in urging controls, is striking. The Commerce Department is also exempting countries that adopt their own controls. The exemption encourages countries to do so, enabling Washington to focus on countries that resist, like China and India. The degree of international consensus means that even if most firms change their designs and sourcing to eliminate US technology and components, they would still be subject to similar restrictions. The new rules therefore provide little incentive to de-Americanize supply chains.

Now that a precedent has been set, could such controls be aimed at other countries besides Russia? I have argued that such plurilateral controls are the only way to guarantee that controls on exports are effective. Russia is the target today, but a new forum would be poised to coordinate new controls on China, whose "no limits" support of Russia, even post-invasion, has enhanced its potential to be perceived as a threat to global security.

The official forum for discussion of multilateral export controls, established in 1996 and known as the Wassenaar Arrangement, cannot serve as a foundation to target other countries. It is set up only to determine lists of goods to control, not to coordinate how each country implements them. In addition, Russia is a member of Wassenaar, which can only add new controls by consensus. Russia is hardly likely to agree to reduce its access to technology, and it can only be expelled if it agrees to leave. In the wake of Russia's war on Ukraine, serious thought needs to go into replacing or supplementing the arrangement.

Will China comply with the Russia sanctions? Refusal to participate definitely erodes the effectiveness of the rest of the world's controls. In addition, China has an anti-foreign sanctions law that could be aimed to counter US sanctions. Yet despite Beijing's insistence that it will not implement sanctions, Chinese firms may well find it in their interest to comply, even while protesting.

That is because Washington has made it clear that firms flouting the controls would be put on the Commerce Department's entity list. The other countries working with the United States could shut off violators' access to their technology too. Beijing would also pay a heavy reputational cost by undermining such a powerful alliance and in effect standing up publicly for a country that has violated China's long-stated principle that countries should not invade other countries. Of course, restrictions on sales to China and its massive market would be harder to swallow than those on Russia, but the flip side of this interdependence is that China is still heavily reliant on foreign technology. The more Beijing is seen as enabling Russia's adventurism, the more it will be seen as a serious security threat by countries other than the United States, even if it does not invade Taiwan.

These issues are not going away. Just as Russia crossed the border into Ukraine, the international community has crossed a border into making internationally supported export controls more legitimate as a tool to punish outliers.

2. The license requirement rules exempt what are called EAR99 items: US goods that are under the jurisdiction of export controls, but do not merit being listed for specific controls. An example of an EAR99 item are the socks in your suitcase flown into Russia from the United States if you visited Moscow for a vacation. There is also a narrow list of exemptions.

3. It goes even further—if the plant doesn't use any US technology or software to produce but does in their manufacturing tools, say, semiconductors that are the direct product of US controlled tech, then those tools could fall under the restrictions.