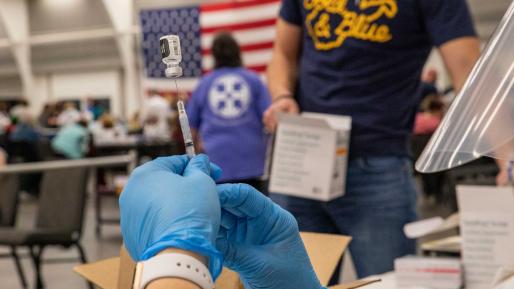 Just as Americans are returning to their normal lives, a cloud is gathering in the form of reports that a “variant” of SARS-CoV-2, the virus that causes COVID-19, is spreading in the United States. Dr. Rochelle Walensky, director of the Centers for Disease Control and Prevention (CDC), is warning that the Delta variant could soon predominate in the United States, making those already vaccinated somewhat more vulnerable to the disease. But the main threat is to localities where vaccination rates are low. Policymakers must redouble efforts to vaccinate all Americans now or risk having to reimpose mask and distancing rules later this year.

The CDC estimates that the Delta variant is responsible for 20 percent of positive COVID-19 tests in the country. Missouri and Kansas have so far been the most affected states. Both are trending below the average national share of fully vaccinated persons over 18 years of age (55 percent), at 52 percent in the case of Kansas and 47 percent in the case of Missouri, with wide disparity across counties in the two states.

Studies show that Delta is more transmissible and more likely to increase the chances of hospitalization, necessitating the full course of vaccines[1] for greater protection. Varying vaccination rates in the United States pose a risk for everyone. Failure to achieve much higher vaccination thresholds across the country in view of the Delta variant means that the pandemic will not end in a nation with the highest availability of vaccines in the world.

Since late 2020, policymakers have gradually come to realize that novel viral variants would pose significant obstacles to ending the pandemic. As more people around the world become infected due to lack of vaccines, inadequate public health measures, low adherence to measures imposed by governments, and behavior, the virus achieves greater fitness and adaptability to its human hosts. The proliferation of variants of concern (VOCs) since September of 2020 has underscored that SARS-CoV-2 is far from exhausting its capacity to mutate, infect, and evade immunity constantly (table 1). The Delta variant is its latest manifestation.

Previously known as B.1.617.2, the Delta variant was responsible for the recent massive outbreak in India and neighboring countries. It has spread to more than 70 countries and has been responsible for outbreaks in countries where the virus had previously been controlled by strict public health measures and compliance. Countries like Vietnam, Australia, China, and Singapore have all experienced COVID-19 surges in recent weeks, leading to great concerns about the health and economic consequences of the pandemic, which, only a few months ago, seemed to be in the rearview mirror.

Compared with other VOCs, particularly Alpha (previously known as B.1.1.7, or the variant that arose in the United Kingdom), Delta is 43 to 90 percent more transmissible. According to a recent Scottish study, Delta is also associated with twice the number of hospitalizations when compared with Alpha. The same study has found that two weeks after receiving the second dose, the Pfizer-BioNTech vaccine apparently provides 79 percent protection against Delta infections compared with over 92 percent against Alpha infections. While vaccines continue to offer significant protection against the development of severe disease, pandemic containment is possible only if they significantly reduce the risk of infections and reduce the pace of transmissions. Messenger RNA (mRNA) vaccines, like Pfizer-BioNTech, apparently retain that ability in the face of Delta, but the reduced protection against infection from this variant warrants greater caution about future trends of the pandemic.

Importantly, the Delta variant has a signature mutation in a position of the viral spike protein genome that had previously been identified only in the Alpha variant. The mutation, P681R, has been linked to a particularly efficient mechanism of immune evasion, according to a yet to be peer-reviewed study.[2]

Impact on the United States

Since the start of 2021, the United States has mounted an impressive mass vaccination campaign that has now achieved full coverage for 55 percent of adults (18 and over) and partial coverage (one dose only) for 65 percent of the adult population. In the past couple of months, however, vaccine uptake has significantly diminished and disparities among states have widened. Vaccination has been the chief contributor to the reduction in COVID-19 cases associated with the still-prevailing Alpha variant and to the impressive declines in hospitalizations and deaths. The wide availability of highly effective mRNA vaccines sets the United States apart from other countries with limited or no access to these vaccines. The importance of mRNA vaccines in containing the pandemic is difficult to overstate: Thus far these are the only vaccines that have proven capable of reducing transmission and protecting against asymptomatic infection.

As the Delta variant spreads, it is imperative to vaccinate the largest possible share of the population. But as table 2 shows, many states still have low levels of fully vaccinated adults—not to mention adolescents between the ages of 12 and 17, who can now receive the Pfizer-BioNTech vaccine—falling way short of the national average of 55 percent.

Low vaccination rates leave states more susceptible to outbreaks and to a reversal of the progress since the start of 2021. The fully vaccinated population in these places is also at greater risk from the documented lower protection against the Delta variant provided by mRNA vaccines (79 percent) compared with 92+ percent against Alpha. Surges in states like Mississippi and Alabama will potentially affect everyone, not just the unvaccinated or the partially vaccinated.

In social and public policy terms, the United States faces a danger of large regional disparities disproportionately affecting groups of the population that have already suffered more from COVID-19, namely African Americans and other minorities. Statewide disparities in future outbreaks could pose substantial challenges to air travel within the United States, as well as to the adoption of public health measures such as indoor mask mandates for both vaccinated and unvaccinated people in vulnerable states.

Policymakers must figure out how to overcome a bewildering mixture of motives preventing wider vaccination rates, including irrational fears, ingrained beliefs, cynicism about government directives, a feeling of invincibility among young people, and various behavioral aspects that are extremely difficult to overcome. The United States risks becoming simultaneously the country best positioned to end the pandemic but least capable of doing so worldwide.

1. A person is said to be fully vaccinated two weeks after receiving the second dose of vaccines that require a two-dose regimen. There are no data on the protection against Delta conferred by Johnson & Johnson’s Janssen vaccine, the third authorized for emergency use in the United States.

2. The mutation may be associated with an enhanced ability to promote an additional pathway to infection: Cell-to-cell fusion. This happens when an infected cell merges with a healthy cell. Cell-to-cell fusion evades antibodies because their function is to neutralize the virus—antibodies cannot detect whether host cells are infected. Therefore, Delta may compromise a significant arm of the immune system. Because the immune system is composed of many parts, T cells, which can detect infected cells under certain conditions, will still retain their capability to attack and kill those cells. Importantly, vaccines elicit the full immune repertoire, including the formation of neutralizing antibodies, as well as antigen-specific T cells.