Any measure that increases the pay of low-wage workers would, by definition, produce a positive effect on the distribution of employee earnings, reducing inequality. This analysis focuses on new wage floors that would be implemented by the employers of a small minority of private sector workers, specifically large private sector firms operating in industries that are not highly intensive in low-skilled labor. As a consequence, the impact on the distribution of wages would be moderate. A $16 per hour wage floor would provide a small boost to real wages in the lower part of the distribution and would reduce earnings inequality to levels observed in the early 2000s.1

Real wages of workers in the lower part of the wage distribution—including overtime, tips, and commission—have been broadly stagnant for 30 years (figure 1). This observation holds for both the 25th and 10th percentile of the distribution of real wages, which were at the same level in 2013 as in the early 1980s. The dots in the figure show what the real wage would be if the $16 wage floor were implemented by large private sector corporates in selected sectors. The effect on the 10th percentile would be small because large firms employ relatively few very low-wage workers, and so only a small proportion of workers in the bottom decile would benefit from the scheme. The effect on the 25th percentile is larger, but even in this part of the distribution the wage floor would only bring the real wage back to the level of the early 2000s.

While lower level wages have stagnated, higher level wages have been growing significantly, contributing to the widening gap between low-wage workers and all others. There are many ways of measuring earnings inequality. Figure 2 focuses on the lower half of the distribution. It shows that the ratio of the median wage to the wage at the 10th percentile has changed over recent decades for all employees and also separately for full-time employees.2 The gap between the worker in the middle of the distribution and the low-paid worker increased dramatically in the 1980s. The gap declined in the 1990s but has drifted back up in the past 10 years.

The effect of the $16 wage floor would be small when considering all employees. As noted above, much of the movement would occur above the 10th percentile. The effect would expand if measured only for the distribution of wages of full-time workers, who have higher hourly wage rates than part-timers. However even for this group the wage floor would only reverse the rise in the 50:10 ratio observed since 2004.

Figure 2: Ratio of 50th to the 10th percentile of the wage distribution 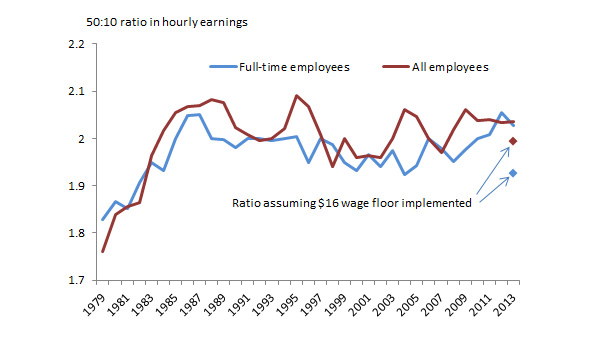 An alternative way of measuring inequality based on the whole distribution of earnings is using the Gini index. This widely used measure takes a value of 0 for perfect equality and a value of 1 for perfect inequality—i.e., if all earnings went to only one person. Figure 3 shows trends in the Gini index for all employees and full-timers separately. This measure of inequality has steadily risen over the past quarter century. Figure 3 shows separately the effect of the $12 and the $16 wage floors on this measure of inequality. The $12 wage floor would not do very much. The $16 wage floor would have a much larger effect, but even this measure would only return the Gini index to levels seen in the early 2000s.

Tomas Hellebrandt has been a research fellow at the Peterson Institute for International Economics since January 2013.

1. The alternative $12 wage floor was also considered in this analysis, but the effect was too small to show in figures 1 and 2.

2. Full-timers are defined as those employees who report working 30 hours or more in the usual work week.