One of the most dangerous consequences of the Great Recession for many economies around the world has been the rise in the share of youth who are neither employed nor participating in education or training programs. Considerable research suggests that less stable employment experiences of young people can lead to "scarring" that affects their future employment and earning prospects—and by extension future output and household consumption.

Analysis based on data from 30 advanced and middle-income economies suggests that, as this research has shown, a sustained 1 percentage point reduction in the share of youth who are not in employment, education, or training (NEET) leads on average to higher growth rate of GDP and household consumption in the medium term by 0.08 and 0.16 percentage points, respectively.

Assessing the likely impact of lower youth unemployment on GDP and consumption growth is complicated by the difficulty of deciding what is cause and what is effect—raising the so-called reverse causation issue. Changes in unemployment do affect purchasing power and therefore consumption and GDP. But there is also a channel working in the opposite direction—falling demand leads to unemployment. One way to overcome this problem and focus on the channel from youth unemployment to GDP or consumption is to look at the relationship between youth unemployment and future GDP or consumption. The analysis below uses data on 30 mostly advanced economies from the Organization for Economic Cooperation and Development (OECD) database to explore this relationship. The data show a statistically significant effect of the share of youth who are either in employment or education on the growth of GDP and consumption after five years.

A simple scatterplot of the average non-NEET rate (one minus the share of youth who are not in employment, education, or training) between 1997 and 1999 against average GDP growth rate in 2005–07 shows a positive correlation (figure 1). The fit, however, is low, reflecting other factors affecting GDP growth. In particular, the sample contains a number of former communist countries and a few developing economies such as Mexico and Turkey. These countries might be expected to have higher growth, other things equal, because they are still in the process of catching up to GDP levels of the advanced economies. 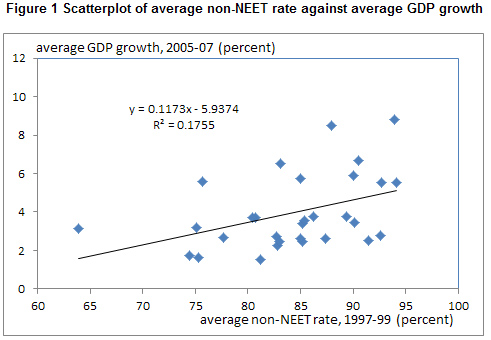 A simple scatterplot of the average non-NEET rate between 1997 and 1999 against average growth rate in private consumption between 2005 and 2007 also shows a positive correlation with a steeper slope and better fit than was the case for GDP growth (figure 2). 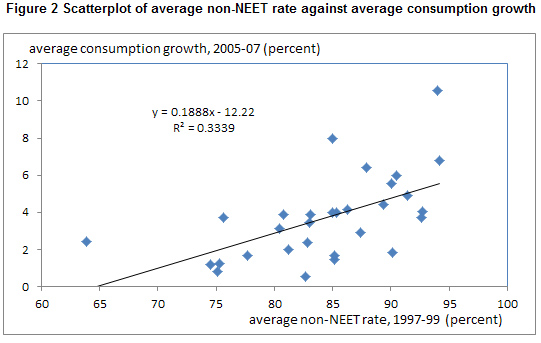 This posting is drawn from a report to the International Business Council of the World Economic Forum entitled "Preparing for the IBC Discussion on the Youth Employment Challenge."