The eurozone's divergences can be traced back to a moment in the last decade when political behavior in Italy, France, and Germany took very different paths. I use Real Effective Exchange Rate (REER) data in both their forms (consumer price index [CPI]-based and unit labor cost [ULC]-based, as provided by the European Central Bank) to underscore the more divergent behavior of national labor costs relative to national prices. For each country these two indicators are seen to have been closely related when national currencies were in place, i.e., before the advent of the euro. After 2000, instead of following a "common" path, the two indicators diverged in all three countries, and most importantly within each of them.

CPI-based REER data (CPI-REER) are much less divergent than ULC-related REER (ULC-REER). This seems to indicate that competitive convergence was at work. But the underlying trends are internal strains of a different nature within each country. These strains—and their social expressions—include low growth in disposable income and domestic demand compression in Germany or weak growth and dual labor markets in Italy. The strains also tend to become bigger year after year. If not addressed in a timely manner, these trends also endanger the goal of price convergence and could require painful corrections of the real exchange rate.

Germany started a policy of holding down costs in relation to prices. Italy and France let costs increase more than prices in 2004 and 2005, respectively. In simple terms the patterns are the following: Italy has increased labor costs much more than consumer prices, while Germany did the opposite. France has a more stable, though still divergent, relation between labor costs and prices.

Several factors could explain these divergences:

If the critical period around 2004—and the softening of the SGP—was a cause of these internal divergences, then strengthening the institutional framework of the euro group can be crucial. The current German proposal of a more disciplined Stability and Growth Pact might remind governments and social partners that their domestic decisions should be taken in light of competition from elsewhere. But the other lesson of the momentous period 2003–04 is that structural reforms are fruitful and should be enacted in an orderly and coordinated way if excessive divergences in the eurozone are to be avoided. 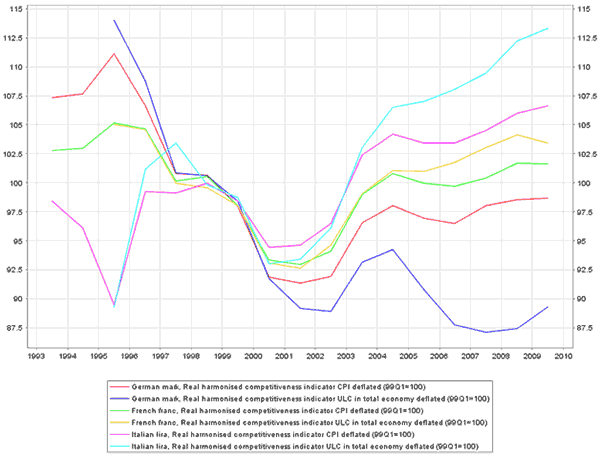 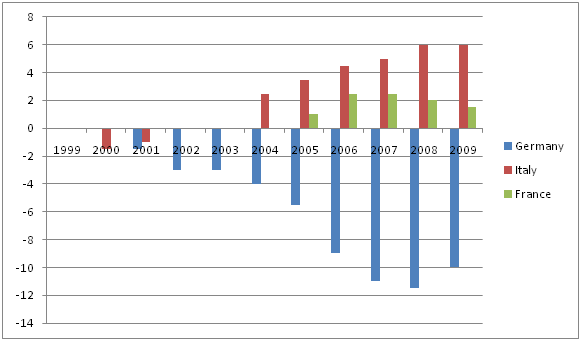