It is generally understood that Greece has undertaken a major fiscal adjustment since the beginning of the crisis that engulfed it. But the scale and speed of the decline in government expenditures do not seem to be fully recognized, despite the close attention devoted to Greece by the press in recent years.

In part, this stems from an excessive focus on measures of the deficit expressed as shares of GDP. Indeed, analysts interested in debt sustainability often focus on technical measures such as the cyclically adjusted primary fiscal surplus as a share of GDP. But changes in these measures are difficult to interpret against the background of a staggering contraction of output, and in any case seem inadequate to capture citizens' well-being.

What is the scale of Greece's fiscal adjustment from the perspective of its citizens? And how does it compare to other countries?

In the case of Greece, real per capita general government primary expenditure rose rapidly and steadily until 2009, when the crisis erupted in that country. Thereafter, such spending has been curtailed—by 30 percent cumulatively through 2014, compared with the 2009 level (figure 1). 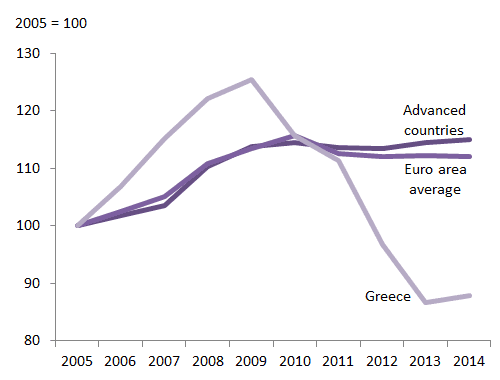 The cut in real per capita spending experienced by Greece between 2007 (the last year prior to the global economic and financial crisis) and 2014 was 24 percent, the most pronounced among the advanced economies (figure 2, where cumulative changes are expressed as a share of the 2007 level). Indeed only four other countries saw declines in real per capita spending levels over that period. Starting the analysis in 2009 would make the cut in Greek spending even more distinct.

Two factors underlie the dramatic scale of these expenditure cuts: First, the deficit was reduced; second, real GDP fell by 25 percent or so over the same period, implying that revenues also fell massively. 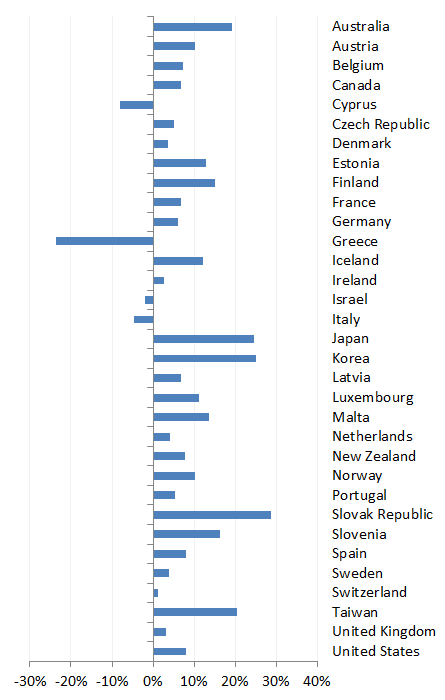 Why a Breakup of the Euro Area Must Be Avoided: Lessons from Previous Breakups

The Future of the Euro Area