Since 1970, the real wages of US production workers have stagnated, despite the rapid growth in output per worker. This apparent disconnect between labor productivity and real wages is most dramatic when real output per hour is contrasted with real average hourly wages since 1970. While real average hourly wages have stagnated, business sector output per hour has grown at 2 percent per year (figure 1).

In a recent New York Times article, Eduardo Porter suggests that this gap has been growing for decades, claims it can be found in many other countries, and conjectures that automation that displaces middle-skilled jobs and "a harsh new global economy" may be responsible. But when the numbers are measured more comprehensively—when wages are broadly defined as compensation to include benefits, comparable price indexes are used to calculate differences in wage and output growth in constant dollars, and the output is measured net of depreciation—the puzzle of lagging wages disappears, at least for 1970–2000. While prior to 2000 blue-collar workers fared especially poorly, constant dollar labor compensation for all workers actually kept pace with output. When appropriately measured, from 1970 to 2000, and perhaps to as late as 2008, the growth in overall worker compensation was precisely as rapid as the growth in average labor productivity would imply. This suggests that the key to explaining sluggish long-run wage growth is understanding productivity growth rather than what drives the distribution of income between capital and labor. If there is something about the American economy that has kept workers from maintaining their share in output as the economy expands, this phenomenon has materialized only relatively recently. 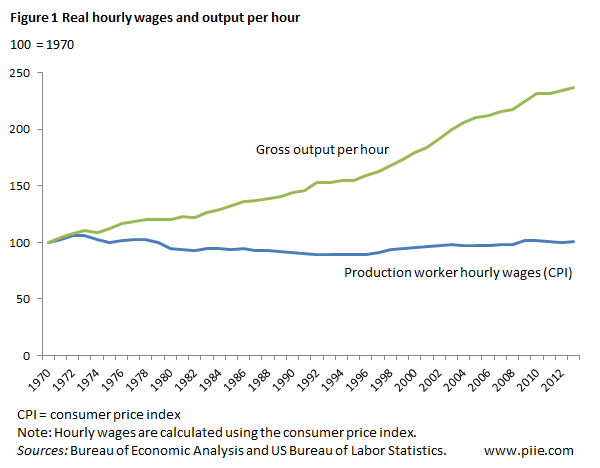 First, production and nonsupervisory workers do not constitute the full US labor force. Broader measures that include the wages of all workers show considerably more real wage growth—a reflection of the fact that the wages of more skilled and educated workers grew much more rapidly than blue-collar workers with less education (figure 2). 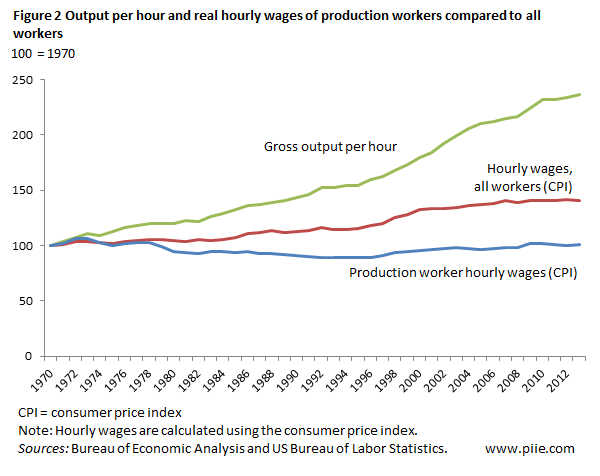 Second, workers are paid more than their take-home hourly wages. Their compensation also includes benefits such as health care and social security, which have increased faster than wages. A more complete measure of real earnings is real hourly compensation that takes all benefits into account. Especially prior to the mid 1990s, real average compensation per worker increased more rapidly than real wages. 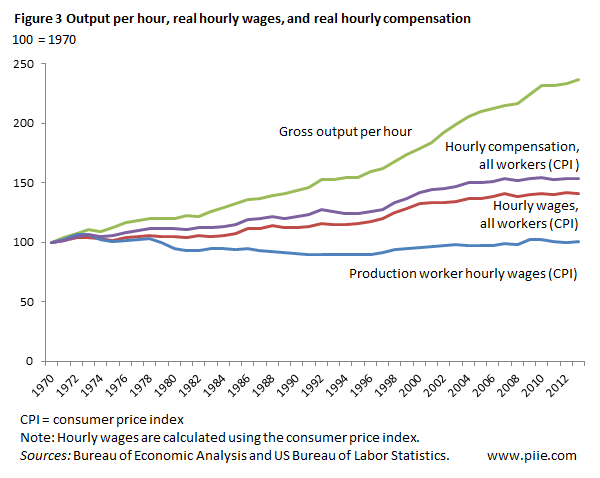 A third issue is that different price measures are used to estimate real output and real hourly compensation. The expectation that "real" wages will rise with "real" output per worker reflects the assumption that workers buy the goods and services they produce or that the price of their output and their consumption will rise at the same rate. But these expectations are flawed. The mix of goods and services that workers produce—which is reflected in the business sector price deflator used to measure real output per worker—differs from the mix of goods and services that is reflected in the consumer price index. In particular, the prices of investment goods such as machinery that have risen slowly feature prominently in the business sector price deflator, while items such as the price of shelter that have risen rapidly feature prominently in the consumer price index. In fact, since the business sector deflator has risen more slowly than the consumer price index, if we deflate the rise in nominal hourly compensation by the business sector price deflator to estimate what would happen if workers actually bought the goods and services they produce—a measure sometimes called real product compensation—we find hourly compensation has actually increased at an annual rate of 1.7 percent per year (see figure 4). 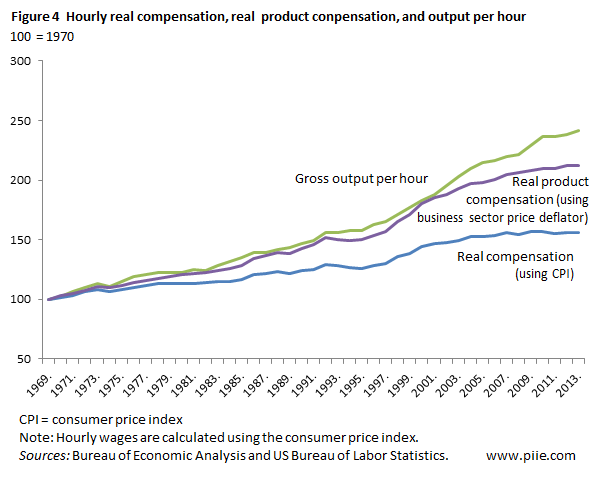 Measuring real product compensation shows that between 1970 and 2000 workers could have increased their purchases of the goods and services they produced at the same rate as the rise in output per worker. This suggests that the decline in labor's share in income only began in 2000.

Figure 5 shows net output per hour and hourly real product compensation, with the difference between them driving labor's share in net income (blue line). Between 1970 and 2003 the growth in hourly real product compensation matched the growth in hourly real net output per worker. In 2003, therefore, the share of net compensation paid to labor was the same as in 1970. If the rise in average net output per hour is a good measure of the marginal product of labor, for this 33-year period, the data are compatible with the assumption that workers have actually seen their wages rise as rapidly as their marginal product. Since labor's share in income fluctuates over the business cycle, and was therefore unusually high in 2000 for cyclical reasons, we cannot be confident about dating when the decline in labor's share in income began. But it is clear that labor's share has been unusually low since 2008, and real wages and compensation for workers of all skill levels has been slow. 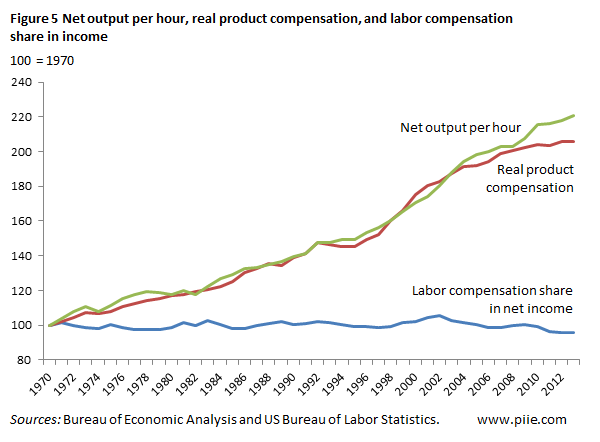 The explanation for the sluggish rise in real wages over the long run—1970 through 2000—may lie not with something that weakened labor's bargaining power but instead in changes in the relative prices of the goods and services that workers consume and those that they produce. In particular, in thinking about policies to raise middle-class incomes, we should be concerned about (a) the rising relative prices of goods and services that workers consume such as housing and education; (b) the rising costs of benefits, especially health care, and (c) the slow productivity growth in services as compared with the rapid productivity growth in investment goods. In the period after 2000, the declining share of labor (and rising share of profits) does warrant further explanation (in a recent working paper, I argue this growing gap reflects a particular type of technical change), but prior to that, simplistic comparisons of "real" output per worker and "real" wages are likely to lead analysts to draw the wrong conclusions.