The newly elected European Parliament, which will start its sessions in early July, has reshuffled politics throughout the region by including more members from the far right and fewer from traditional political groups of the center-left and center-right. But viewed from an EU perspective, there is more stability than meets the eye.  In fact, the EU-wide returns are not as transformative as those of five years ago.

Comments about the European Parliament election results are predictably all over the place and typically reveal more about the commentators than anything else. To get a clearer sense of direction, it may be useful to compare the 2019 election outcome, not only with recent opinion polls or the 2014 election but also with all the other elections (once every five years) since the first one in 1979. My own perspective is affected by the fact that I did exactly that after the previous election in 2014, when I published a chart and brief post arguing that the then-observed increase in votes for what I dubbed “non-mainstream” parties was significant but did not bring their share in the European Parliament to a historically unprecedented level (see figure 1). 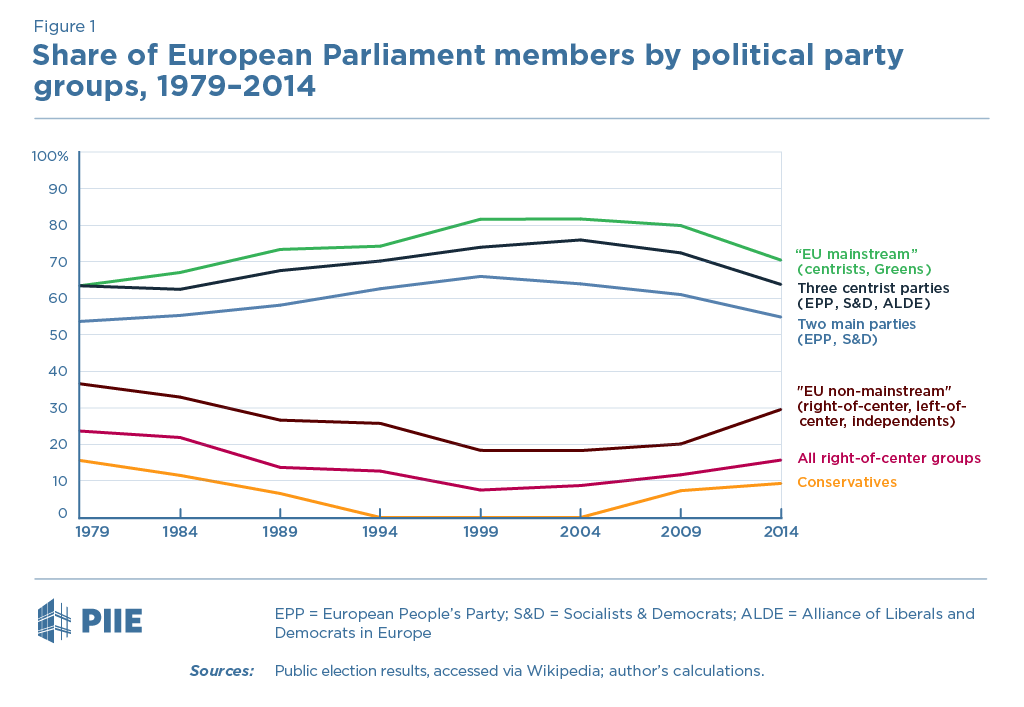 The emphasis on typology is important, because the devil is in the labeling. Labels such as “populist” or similar monikers are often a matter of opinion. Some parties are perceived as more disruptive than others, but such perceptions are easily distorted—not least since some of these “insurgents” have been firmly in power for some time, such as Fidesz in Hungary since 2010. Similarly, my choice to label UK conservatives as “non-mainstream,” except during the long decade of their membership of the European People’s Party (EPP) group, may be questioned from a British perspective, but it makes more sense from an EU perspective both before and after the Tories’ membership in the EPP. (The yellow line in figure 1 refers to the group now named European Conservatives and Reformists (ECR) and its predecessor the European Democrats in the late 1970s and 1980s.) That same choice arguably makes even more sense today.

I produced the 2014 chart in late June of that year, about a month after the election, when the membership of national parties in the European Parliament political groupings had coalesced. We are not yet there in the 2019 cycle, and indeed there are more uncertainties than usual as to the boundaries of these pan-European groupings. An additional and large uncertainty is related to Brexit, to which I return below.

But thankfully there are many projections based on current affiliations, declarations, and opinions. In figure 2, I use the projection by Simon Hix and his colleague Kevin Cunningham of the London School of Economics. Their projection has the advantage of minimizing the number of unaffiliated members of the European Parliament (MEPs), i.e., they allocate more of the elected MEPs to specific party groupings than most others, including when these MEPs ran under the banner of parties that were not represented in 2014. That gives more precision to the result. Other projections, however, were not drastically different when consulted on May 28, 2019, such as those by Europe Elects, The Guardian, Politico, or on Wikipedia. For the 2014 and earlier elections, I just kept the numbers from my 2014 post, even though some MEPs or parties have changed their group affiliation between 2014 and 2019. 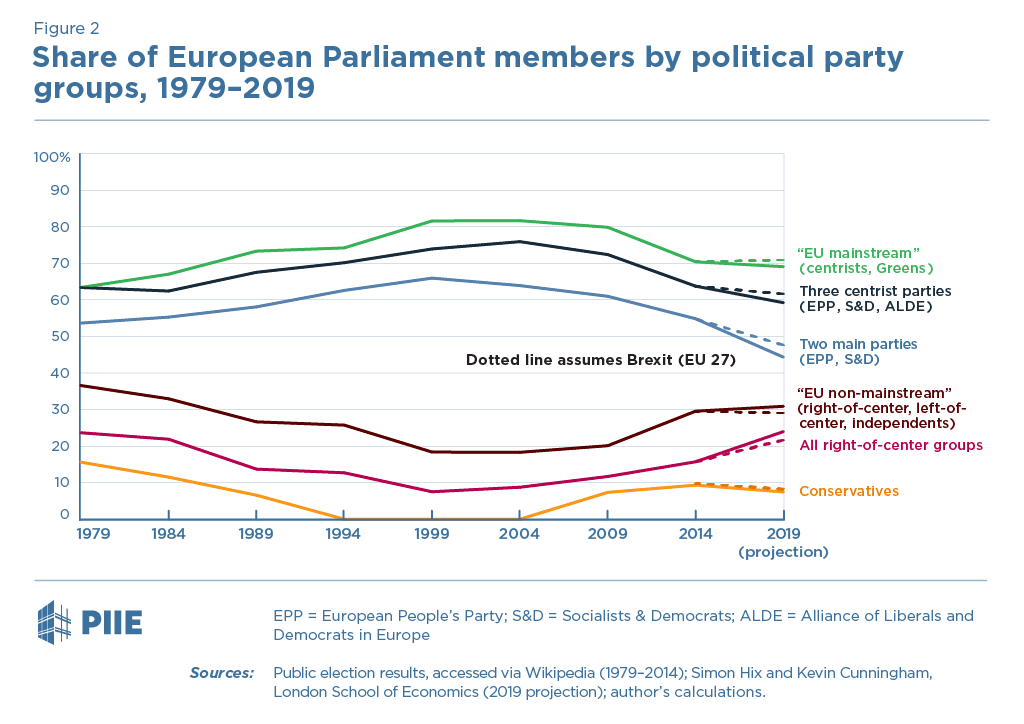 The implications are quite clear. The strength of the far right in 2019 is notable and unprecedented, even though in 2014 it was partly masked by the fact that France’s National Front MEPs were labeled “independent” (they joined a group only in 2015). So is the fall in the traditional Volkspartei combination of center-left and center-right, namely EPP and the Socialists & Democrats (S&D). For the first time ever, these two no longer command a majority together. But these trends are offset by others: the further erosion of the far left and the rise of the Greens and liberal centrists (Alliance of Liberals and Democrats in Europe [ALDE], to which the 2019 projection adds presumed allies especially in France and Romania). As a consequence, the broad grouping that I labeled “EU mainstream” in 2014 has a near-identical share of total MEPs, close to 70 percent, and so does the “non-mainstream” grouping, at around 30 percent. Viewed through this prism, the disruptive election was 2014, not 2019. This election is one of stability along the mainstream /non-mainstream divide, even as each camp gets internally reshuffled.

In my 2014 post I concluded on what was then a contrarian note, namely the possibility of “another trend reversal,” by which I meant some recovery of the mainstream camp in 2019. As figure 2 suggests, this recovery has not happened. The mainstream share, as I defined it, declined slightly in 2019 and will decline further if, as could well happen, parties such as Fidesz and Romania’s PSD leave the EPP and S&D groups, respectively. But another event may intrude, if the United Kingdom confirms its stated intention to leave the European Union. In that case, the 73 just-elected British MEPs will lose their seats and will be partly replaced by 27 MEPs from 14 other member states, who were also elected in the 2019 election but are currently in limbo. (One of them is Sandro Gozi, former Italian undersecretary for European affairs and number 22 on the list of the centrist La République En Marche [LREM] party in France.) A full list of these 27 “extra” MEPs was not found while researching this post, but its party composition can be expected to be broadly similar to that of the 678 MEPs of the EU-27 member states – i.e., excluding the United Kingdom. Since the just-elected UK MEPs are comparatively less “mainstream” than the EU-28 average under the convention used here (52 percent mainstream to 48 percent non-mainstream, to be precise), that simulation would actually result in a very slight trend reversal, all things equal (see dotted lines in figure 2).

Needless to say, all things are not equal, and further rejigging of the party groups is to be expected, some of it presumably affecting what is presented here as the mainstream /non-mainstream boundary. But the broader picture is likely to hold. Viewed from a long-term EU perspective, the new European Parliament may be unprecedentedly diverse but is not exceptionally radical.

Why Are German Centrists Cozying Up to Hungary's Orban?

Italy Heads for Confrontation with Itself, Financial Markets, and Europe