Growth in the euro area has slowed since the beginning of 2018, and the risk of a recession is growing. Yet the European Central Bank (ECB) has barely any space left for monetary stimulus. No central banker will easily acknowledge that he or she has run out of policy options, but in September 2019, Christine Lagarde, who takes office as ECB president on November 1, seemed to admit as much, saying “central banks are not the only game in town.”

This blog focuses on why there is a lack of monetary policy options to counter a possible European recession. A forthcoming post in this series will discuss the fiscal actions that can be taken.

As illustrated in a recent PIIE Policy Brief, no one would dispute that the US Federal Reserve still has room to act to counter a recession, even though there is a debate over the extent of its tools. But the ECB is much more severely constrained. Whereas the federal funds rate is still close to 2 percent, the overnight rate in the eurozone is already well below zero (figure 1). 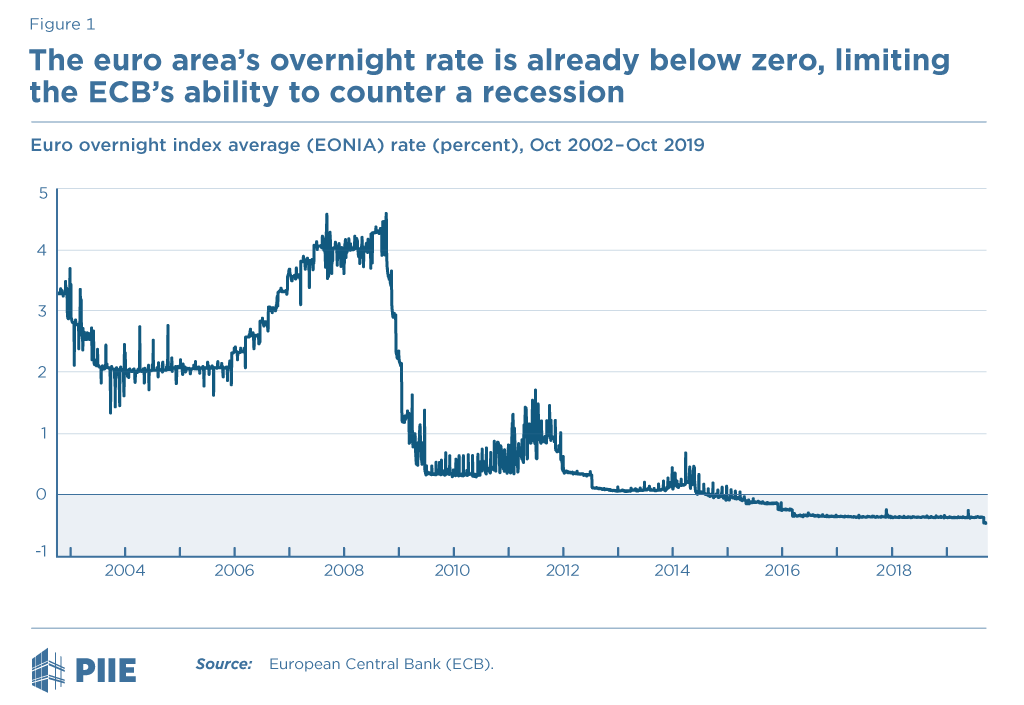 On September 12, the ECB committed itself to keeping key policy rates “at their present or lower levels until [the Governing Council] has seen the inflation outlook robustly converge to a level sufficiently close to, but below, 2 percent within its projection horizon, and such convergence has been consistently reflected in underlying inflation dynamics.” This is as unambiguous as the ECB could be, given the slightly awkward formulation of its inflation objective. The ECB Governing Council reemphasized its stance on October 24—the last meeting chaired by the outgoing president, Mario Draghi.

This announcement may help stabilize market expectations of future policy rates, but it does not by itself represent a boost. Nor does it broaden the future policy space.

On September 12, the ECB also announced the resumption of net asset purchases, which had been interrupted since December 2018. Draghi recalled on October 24 that this decision had been supported by “a clear majority of members [of the Governing Council],” an admission that several of them opposed it. Beyond immediate controversies, however, the more important question is whether there is still much scope for additional sovereign bond purchases, and how effective they can be.

When the asset purchase program was initially implemented in 2015, the Eurosystem[1] announced that

Despite having been tweaked several times already, self-imposed constraints nowadays limit the scope for further extension of the quantitative easing (QE) program. The composition of the bond portfolio has deviated from the capital key, and the ECB already holds close to one-third of the stock of sovereign bonds of several countries, including Germany and the Netherlands.

As Draghi indicated in his press conference on October 24, current constraints on ECB asset purchases are self-imposed and could in principle be lifted. Several options can be envisaged for pushing the limits farther away. The ECB could continue to purchase securities issued by countries for which current holdings are below the 33 percent threshold, i.e., high-debt ones, while essentially stopping its net purchases of AAA-rated sovereign bonds. As a consequence, the structure of the bond portfolio would diverge from the capital key and converge towards what is known as the “market key.” This could make perfect sense from a monetary policy viewpoint. But if such a strategy were implemented, the continuation of the QE program would be unlikely to affect long-term rates on risk-free assets in a significant way.

Alternatively the ECB could lift the 33 percent threshold for AAA-rated sovereign bonds (the issuer limit), as advocated by Claeys and Leandro (2016). But such a policy would somehow amount to an official recognition that the German bund has safe asset status in the eurozone, whereas the French or Italian government securities do not enjoy this status. Or it could lift the 33 percent limit altogether. But such initiatives could be controversial within the Governing Council and could expose the ECB to legal challenges.

Turning to effectiveness, prima facie evidence suggests that the scope for impact is narrow. As indicated, the overnight rate is already well below zero (–0.5 percent on October 30, 2019). Furthermore, the term premium is extremely low, as the combination of forward guidance and asset purchases has gradually brought most of the yield curve for risk-free assets to negative territory (figure 2). 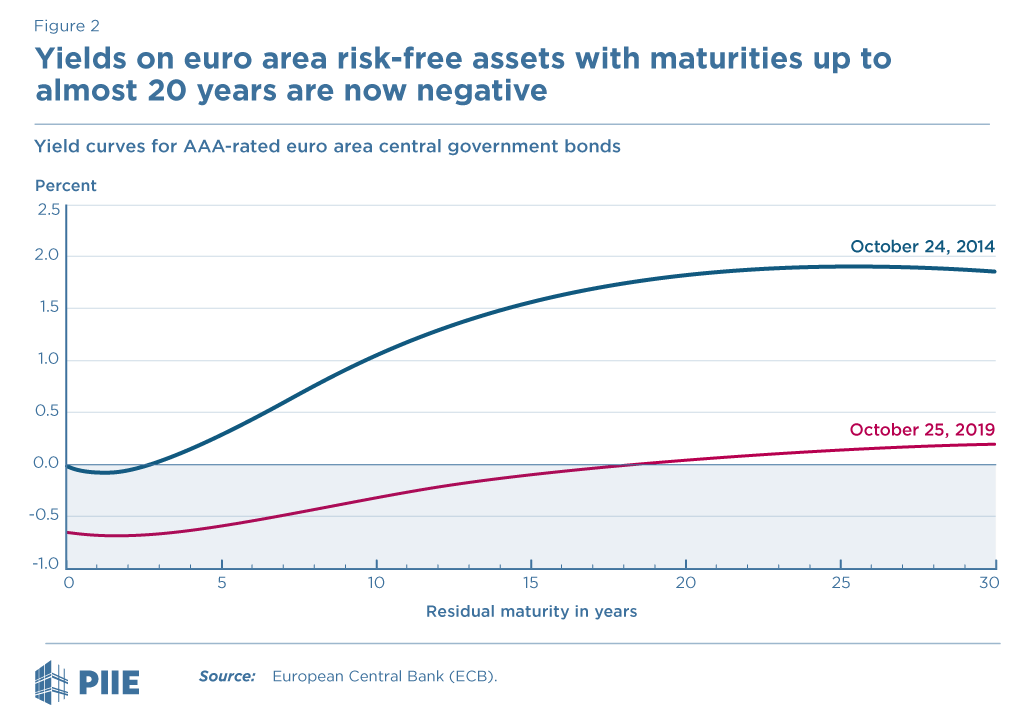 Eser et al. (2019) estimate that when it was interrupted at end-2018, the ECB’s asset purchase program had reduced the 10-year term premium by 95 basis points. Importantly, their assessment was also that most of this reduction had been obtained by March 2016 already. In other words, the marginal effect of additional asset purchases has become very small (figure 1 in Eser et al. 2019). Further purchases may help keep the term premium at a compressed level but they are unlikely to make it more pronounced.

These factors add up to a conclusion often voiced by Draghi, who has increasingly called on governments to undertake fiscal action—the subject of the next blog in this series.

This post is the first in a PIIE series on how to confront the next European recession. View others:

1. The Eurosystem comprises the ECB and the 19 national central banks of the euro area members.

2. The “capital key” of the ECB is based on each member country’s population and GDP and is revised regularly. The low level of public debt in some member states or the fact that part of it was not available on the market (especially for countries under assistance programs) quickly led to departures from this benchmark, however.

3. In 2013, collective action clauses were generalized in eurozone sovereign bond contracts. As the qualified majority for restructuring decisions is generally 75 percent, ECB holdings in excess of 25 percent of bonds outstanding would give it a veto over debt restructuring decisions. The ECB doctrine has been that such decisions should be left to market participants and that it should avoid casting its vote on such matters, especially as a vote in favor of restructuring could be regarded as monetary financing.

The Euro Area's Fiscal Ability to Handle Another Recession Is Limited